Great American art faker but not for profit: Mark Landis

Mark A. Landis (born 1955) was born in Virginia but was constantly on the move with his Navy father. At age 17, the young man suffered a schizophrenic breakdown when his beloved father died. Art therapy helped, so Mark enrolled in School of the Art Institute of Chicago and then San Francisco Art Institute. But neither lasted for long.

Landis became a forger who tricked 50 unsuspecting museums across 20 American states. He covered the USA, donating counterfeit art to museums, but not to enrich himself or to ridicule the establishment. Instead his goal was to be viewed as a philanthropist, gaining family respect. I must admit that to be a convincing forger, Landis must have been a talented artist in his own right . He "created" works in oil, watercolour, pastels, chalk, ink and pencil, making most of his copies from museum or auction catalogues that provided dimensions and information on the originals.

Associated Press said that Landis, who has occasionally dressed as a Jesuit priest or posed as a wealthy donor driving up in a red Cadillac, apparently never took money for his forgeries and has never been arrested. Eventually his works were collected into their own satirical exhibit called Faux Real which was held on April Fools' Day 2012 at the University of Cincinnati.

Educating people about forgery and letting people know about Landis was the only way to stop him, said the director of the Paul and Lulu Hilliard University Art Museum in Lafayette La. This museum had been duped in 2010 with a Landis donation of a work supposedly painted by American Charles Courtney Curran.


He bestowed gifts under different names such as the Father Arthur Scott, the alias he used at Hilliard. In that case, he told officials that his dead mother had left works including Curran's 1894  oil-on-wood painting Three Women and that he was donating it in her memory. Museum employees became suspicious when Landis kept changing the subject under questioning and quickly concluded it was a forgery. 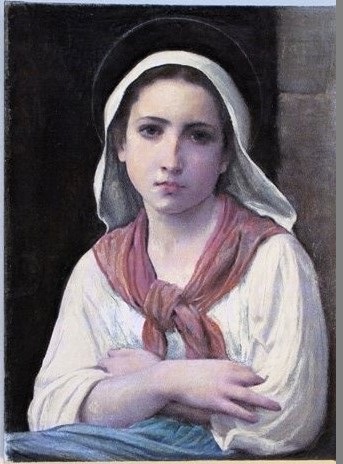 Portrait of  a woman  by Mark Landis.
Supposedly a work by C19th  French painter William-Adolphe Bouguereau.
The fake was shown at the University of Cincinnati exhibition.

Landis vaguely acknowledged his trickery. He told The Associated Press he made his first forgery donation to a California museum in 1985. "They were so nice. I just got used to that, and one thing led to another. It never occurred to me that anyone would think it was wrong." Oh really??

The Cincinnati exhibit of 40 works given to 15 museums grew to c100, as soon as Landis donated 60 pieces he possessed, along with his priest's outfit. The Faux Real show depicted famous art forgers, details of how Landis made donations and ways of detecting fakes. Visitors could view some works under ultraviolet light that caused sections to glow, if they contain contemporary ingredients.

Art experts said not accepting payment for his forgeries helped keep Landis from ever being charged with a crime. However museum officials said there was a real price to pay - forgeries hurt their reputation and cost time and money researching suspected fraud.

Landis typically targeted smaller museums that did not have the resources to thoroughly check donations. While museums did not pay Landis, some treated him to receptions and gifts, before realising the works were fakes.

The exhibit used Landis’ story to show how forgeries occurred and demonstrated that institutions and the public should not take art at face value. The exhibit didn't increase the value of Landis' works — considered worthless except as educational tools on forgery — and the curators heard no objections to spotlighting his works. Landis was thrilled. 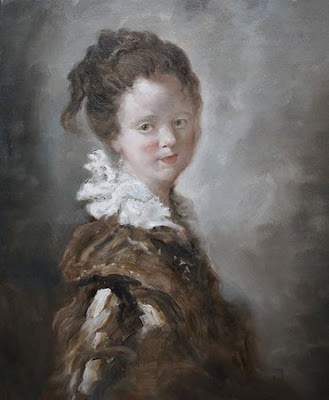 Supposedly Portrait of a Young Woman by Jean-Honoré Fragonard c1769 Actually painted by by Mark Landis.

Intent to Deceive: Fakes and Forgeries in the Art World (2015) was a ground-breaking exhibition at the Oklahoma City Museum of Art that highlighted 60+ works by some of the world’s most notorious con artists. It illuminated their dubious leg­acies and examined how their talents, charm and gall ensnared the art world of the C20th. Sev­eral ingenious forgers were profiled in this show, representing some of the most infamous scandals of our times. The exploits of Han van Meegeren, Elmyr de Hory, Eric Hebborn, John Myatt and Mark Landis had shaken the art world at various times, gathering each of them worldwide notoriety.

Included in each forger’s profile were their original works, personal effects and ephemera, photos, film clips and representations of the material and techniques used to create these convincing fakes. Also included were original works of art by modern masters such as Henri Matisse, Amedeo Modigliani, Paul Sig­nac and others, shown alongside several of the world’s most accomp­lished art forgers - to test the viewers' perceptions of authenticity.

Landis may be the most famous art counterfeiter who never committed a crime. But Landis implied the works were by Old Masters, he falsified documents and he used aliases. I think the exhibition of fakes was an excellent idea, but not for the reason given  i.e. “to educate the public about art forgery”; “to ensure that institutions and the public don't take art at face value”. We should be asking if, as long as a talented artist didn’t explicitly lie about his works coming from Old Masters, "have his fakes nonetheless devalued the Old Masters"?

Hello Hels, I am fascinated by the study of fakes and all their ramifications. However, exhibitions of fakes like these reinforce the idea of a fake-real dichotomy, that what isn't "real" must be a fake, and that fakes are made by artists like Landis working from scratch on a blank canvas.

While those are one type of fake, often the most problematical pieces in the art world are those which are partly real--marriages, divorces, misrepresentations, altered pieces and extreme degrees of restoration.

I also reject the idea that the maker of 'quality' fakes is necessarily a great artist because he can imitate the same. The art from the Baroque period, for example, is valued because it is representative of, and a link to that period. No artists today who work in that style are considered to have importance, because imitating a style involves suppression of originality, which is one of the prime qualities we value in artists.
--Jim

I think that the innocent acceptance of forgeries not only devalues old masters and museum's reputations; it also exposes some of the dubious values of the art world in general.
In some of the incredible high prices paid for works by, say, Van Gogh art is commodified and can be kept in storage as an investment. Then we have the difficult question of intrinsic value. The philosophy of art then comes into play. Blimey, This is a complicated subject!
One other thought: what is the morality of the works of a forger acquiring added value through curiosity? The more I think about these issues the less I know or understand. I'm floundering in the dark.
CLICK HERE for Bazza’s brittle Blog ‘To Discover Ice’

Remember the fake Albert Tucker sold at auction a while back. Years later the successful bidder felt cheated and wanted her money back.

But you said it yourself - the most problematical pieces in the art world are those which are partly real eg altered pieces or extremely restored pieces. And I would add studio pieces where the students were asked to do 90% of the painting and the master was responsible for (eg) just the face.

I have no idea what to make of Landis since he said he never wanted to cheat anyone.

what is "intrinsic" value anyhow? If you are interested in buying a Pre-Raphaelite Brotherhood painting you have never seen before, you look up the auction prices for every Millais, Holman Hunt and Rossetti sold in the last 100 years and make an intelligent guess at what your heart's desire might be worth. If the suggested price is too low, it might be a fake. Or Rossetti may have gone off the boil this century. Or the Chinese buying market has snapped up every Pre-Raphaelite, and only rubbish is left.

It is a great topic, but indeed one to flounder over.

I am guessing you mean the fake Albert Tucker painting called Faun and Parrot. It was bought in 2000 at the most famous auction house in Australia. Christie’s was found liable to pay 85% of the collector's damages, assessed at $118,789 (and the rest by the dealer etc).

The landmark decision in Dec 2014 followed a heated 10-day trial in the NSW Supreme Court, four years of obfuscation and manipulation from key players in the art world and 10 years of being in possession of a painting the collector paid some $87,000 for, that is now worthless and will probably be burnt.

what do you think of "Damforst Museum - the online museum of damaged, forged & stolen art"? If we can trust it as a serious analysis of museum objects, Damforst has quite a lot to say about problematic art.

Hello Hels, I thought the Damforst Museum site was a very funny look at a rather serious subject. Thanks for the link. Behind its facetious veneer it seems quite on spot. (I noted that it comes from Columbus, Ohio!)

Regarding the profit motivation of forgers, I think that they are culpable whether they receive money or not. They certainly are cheating the museums and curators of their time and reputation (of course, this is part of the allure for some forgers). More important, they are cheating the public of the chance to see real art and to form their tastes and education from its quality and aura.
--Jim