After my late father retired from engineering, he bought a travel agency and travelled the world. My late mother was still a practising journ­al­ist back then and she travelled with him. I have used the notes they left, des­crib­ing their favourite city in Eastern Europe: Poland's former Royal capital, Krakow.

Rynek Glowny/Main Market Square is the 200-square meter medieval centre of the city. The square was designed in 1257, and remains one of Europe’s biggest medieval square. The very special archit­ecture includes museums, churches, synagogues and public gather­ings. And the Rynek Underground Museum, which lies below the square.

At its centre is Sukkennice Cloth Hall, one of Krakow’s best-known tourist attractions. Originating in the Renaissance period, this very early shopping mall has had UNESCO World Heritage protection since 1978. Krakow must have been hopping and jumping with international trade: here traders exported lead, salt, text­iles, imported silk, spices and leathers from the East. 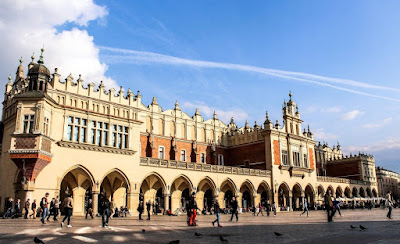 Next to the Old Town’s famous square, approach the Mariacki Church-St Mary’s Basilica - first built in the C13th and rebuilt in the C14th. Note the two very elegant Gothic towers and note the main entrance with its Baroque por­tal added in the C18th. Listen to the city’s famous hejnal mariacki bugle call that is played out from the taller tower every hour, symbol­ising the alarm that used to warn citizens of Mongol attacks.

Then enter the church and explore the beautiful interiors. There is a special altarpiece made of wood, built over 12 years by the Ger­man artist Veit Stoss. See the altar­piece that displays the Virgin Mary and the Apostles, coloured paintings around the altar­piece, superb C14th stained glass windows and Veit Stoss’ crucifixes. 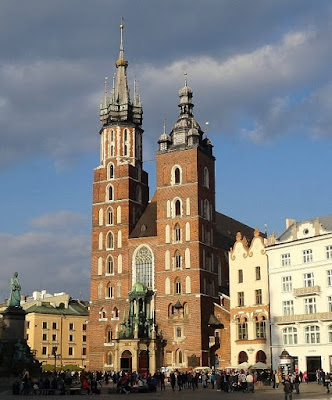 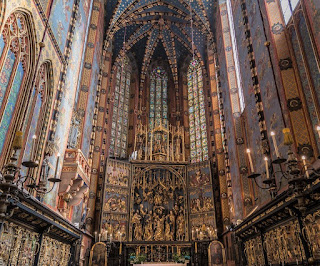 The Altarpiece of Veit Stoss is the largest Gothic altarpiece in the world.
Built in the 15th century

Wawel Castle had been used as a fortified timber site, ever since Pol­and’s first ruler in the late C10th was established, and rebuilt more solidly later. The tradition of crowning the Polish king in Wawel Cathedral started with Władysław the Short (1306-1333) and continued for centuries. From then on, all the rulers used the Castle as a residence.

This royal castle only fell apart after the capital was moved to Warsaw in 1596 and Poland went into decline. The Austrians occupied Krakow and destroyed buildings, as they chose. The worst damage happened when the Castle was used as the headquarters of the Nazis during the German occupation of WW2. As a result, Wawel Castle survived into the modern era with bits in the Romanesque, Gothic and Baroque styles. The royal apartments display royal treasures that stunned and amazed over the centuries eg C16th Flemish tapestries and very special Renaissance paintings.

Because Wawel was the seat of the Polish government back then, the castle inhabitants needed to spot intruders before they invaded. In order to offer strategic defensive benefits, therefore, the castle overlooked the Vistula river on a raised rock out­cropping. Luckily the rise of the hill provided amazing views into the distance. 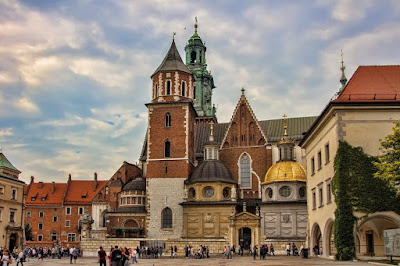 The Czartoryski Palace Museum displays historical arte­facts from the recovered treasures of Wawel Cathedral and the Royal Castle. The other precious objects on display were donated by Polish noble families.

For 500 years, Kazimierz District was the bustling centre of Jewish life and culture. In 1938, Kraków's Jewish population numbered at least 60,000, 25% of the city's total population. The Jews mainly lived in hist­oric Kazimierz, until they were rounded up in 1941 and moved into Kraków’s Podgórze Ghetto. And then to the death camps.

When the Nazis created the Jewish ghetto in Podgórze in 1941, the Catholic-Polish owner Tadeusz Pankiewicz and his staff in the Pharmacy under the Eagle Museum were heroic. For two years this pharmacy became an important source of medical aid for Jews, fal­sifying documents for them and avoiding deportations. The staff risked their lives in many underground operations. Today the five rooms of the building, since restored as it had been during Nazi occupation, is a branch of the Krakow Historical Museum.

In 2005 the Emalia premises of WW2 hero Oskar Schindler  became the property of the City of Krakow and the space was placed under the control of the Krakow Historical Museum. The former administrative building became the heart of the museum.

My parents did not go to visit Auschwitz-Birkenau, 70km southwest of the city.  Many of the extermination camp buildings had been left, when they were liberated by the brave Russian army in Jan 1945. They did however visit Terezín near Prague.


During the Soviet years, Kazimierz became a derelict part of the city. But since the fall of communism in the 1990s, the district again became a bohemian neighbourhood enjoying life in bars, cafes, historic sights and learning. Remuh Synagogue, still active and lovely, was built in the 1550s. Galicia Jewish Museum records and displays both the wonderful and the tragic eras of Polish Jewry. Plac Nowy is home to weekends markets with antiques, books and food stalls. Cheder, which was opened by the Jewish Culture Fest­ival Association in an old synagogue, is a site used for lectures, film screenings, concerts and Israeli coffee. 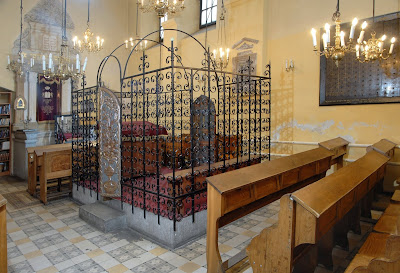 Rumah Synagogue
built in the 1550s

The now unused Wieliczka Salt Mine is a UNESCO-listed monument where vast underground chambers fascinate tourists. The underground corridors open onto a complete chapel, carved out of the salt, and a very special working con­cert hall. If I wasn’t claustrophic, I might visit the Krakow Salt Works Museum that shows what life was like for the miners, but 135m below ground is too much for me ☹ The Wiel­iczka, one of the largest mining museums in Europe, was opened after WW2 ended. Today the exhibits include salt crystals, docum­ents, paintings and sculptures, mining equipment, lamps and tools, all illustrating the various stages of salt production in Poland over the centuries.

I've read about the salt museum at least. It must be a wonderful thing to have your parents' papers and to see things through their eyes.

My parents are Polish but not from Krakow. They loved the Chopin concert most.

My late mother wrote beautifully and I have a few books of hers that were published. But her newspaper articles were less academic and more tourist-friendly, so I was delighted to find her stuff.

Your comment reminded me about the salt museum, so I added a link to an old post.
https://melbourneblogger.blogspot.com/2017/11/krakow-salt-works-museum-under-and-over.html

Trip Advisor agrees. With its many nocturnes, mazurkas and polonaises, Chopin's music is marked by a feeling of longing for his homeland, making this musical experience a wonderful way to enter the rich history and culture of Poland. Begin the evening at the Chopin Gallery, located in the heart of Krakow's Old Town. Take a seat inside the C15th building, once inhabited by the huntmaster of the Royal Family. Award-winning pianists will then take the stage and perform Chopin’s most celebrated pieces within the historic venue during the 1-hour concert.

I am pleased you enjoyed the blog, but I don't do advertising.

Hello Hels, Krakow looks like a storybook land--its too bad about what actually happened there and what motivated it!

You mentioned your mother's articles before. Can't you do a special post in her honor, reproducing just a few? I would love to read them, and I am sure that others would, too.
--Jim

p.s., Those advertising comments, 1) whose authors are unknown to you, 2) contain no real response to or information about your blog, and 3) contain links, are just spam. The name signed to them was probably taken over by the virus or bot program which spreads them.

And the links, which someone could accidentally press on your blog, very likely contain viruses. You can ask a computer expert, but I would simply delete these on sight. Questionable links are not worth keeping around!

Re the advertising. If I delete the comments unread, the offenders will move on to other blogs and be totally unrecorded and unaccountable. If I publish them and say thanks, but no thanks, they could contain viruses as you say. So I am going to record the offenders' names and delete their comments.

Re Poland, neither Joe's family nor my family had any tie to Poland, not familial nor cultural. But of the 120 pupils in my year at school, I would guess that 90% were either born in Poland or born to Polish parents who had escaped after the camps were liberated. So I was fascinated see where my parents travelled, after retirement. Krakow must have been beautiful.

Lovely notes and photographs of a city and country I have not been to yet.

Me either. Even though Poland borders on Germany, the Czech Republic and Ukraine, countries we know well.

My son has a travel agency in Israel, and often goes to places like Poland, Lithuania and Belarus to organise tours. I must ask him which are the most fascinating places for an art and architectural historian to visit.

have you been to Krakow? What did you think of that city?

Hello Hels!
Nice to read such a wonderful post about the city of Krakow, which I really like visiting.
I wish you a nice Sunday:)

it is indeed a beautiful city. I created a link to your Krakow posts, thanks.

I have translated your comment, many thanks for the connection.

Good day. I don't know how I got here because, as a computer specialist, I'm weak. But it's Christmas and I feel like writing. I can tell you why I came here. Well, I have a reproduction of a painting on the wall about which I only knew three weeks ago as much as I saw it. So a monk standing and full of peace and faith looking into the window of the cell. Behind him a herd of lions. For several years I was fascinated by this picture so that I couldn't even talk about it. This year, however, something disturbed me and I decided to make an oil copy and give a friend for Christmas. Of course, do it with the hands of another familiar painter :). The copy is obviously different but the thought contained in it is faithfully reproduced. And that was it. The gift, however, forced that I should have at least elementary knowledge of this image. And so I came to ... of course Google :) and through him to your blogs. Name & quot; blog & quot; it hit my ears but only now I realized that it was interesting