Since first writing about art stolen by the Nazis during WW2 and hid­den in various underground salt mines in Germany and Aust­ria, I have read everything I could on The Monument Men. When the Nazis found the Altaussee Salt Mines in Alp­ine Bavaria, for examp­le, they were delighted to ship their 6500 stolen art treas­ures into this salt-heavy, pastoral hideout. Today, ever since the film Monument Men appeared in our cinemas, tourists have flocked to the Altaussee Mines.

When I heard of the Krakow Salt Mines Museum of Art on tv, I assumed it was another amazing memorial to art stolen by the Nazis during WW2. Wrong! Nonetheless it is fascinating.

The Krakow Salt Works Museum is a large exhibition space in the Wieliczka Salt Mine in Southern Pol­and, established after WW2. The mine, which continuously pro­duced table salt from the Middle Ages on, now consists of Two Worlds, A] an underground with a large exhibit in the salt mine 135m below and B] an above­ground in the Salt Works Castle.

A] The Underground World is located in 17 historic mine work­ings, designed out in the 19th and early C20th. The museum has a rich collection of mining technology, inc­l­uding a collection of treadmills for horses, an early form of lifting gear which is displayed in its original environment.

The tourist route takes up only 2% of the mine’s total length. The large Under­ground Salt Cathedral of Poland, with walls carved to replic­ate chapels from the earlier centuries, has chandeliers made from rock salt which have a glassy appear­ance, and rel­ig­ious sculpture. Plus there are historic and modern stat­ues eg Copernicus, Goethe, Chopin.

Wide salt stairs, from which one can admire St Kinga's Chapel (started in 1896) in its full splendour, lead inside. Opposite the entran­ce to the chapel is the main altar with a statue of St Kinga, car­v­ed by Józef Markowski. The chapel walls are adorned with salt reliefs featuring various scenes from the New Testament and decorated by the Wieliczka miner sculptors. It is here that the only exist­ing underground salt-carved monument of Polish Pope John Paul II. 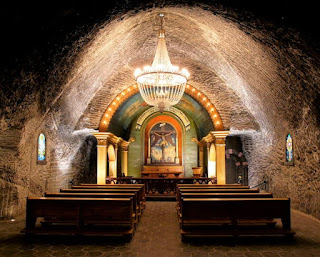 There is reception room that is used for priv­ate functions, including weddings. The chamber has walls carved by miners to resemble wood, to resemble medieval wooden churches built all over Eastern Europe. A wooden staircase provides access to the mine's 64m level and a lift returns visitors to the surface.

Many shafts were dug throughout the time the mine was op­er­ating. See the preserved mining equip­ment, small under-ground brine lakes, and salt-hewn spaces. The underground ex­hibition features a unique collection of horse powered extracting tread­mills of three different types: Polish, Saxon and Hung­arian, and machines to haul the salt to the top of the surface.

There is wide range of exhibits: specimens of beautiful salt cryst­als, ancient utensils for salt production, documents and maps, paintings and sculptures from the non-existent und­er­ground chapels, ceremonial mining weapons, a Miner’s Union Horn, a collection of mining lamps and tools illustrating the various historical stages of salt production locally. 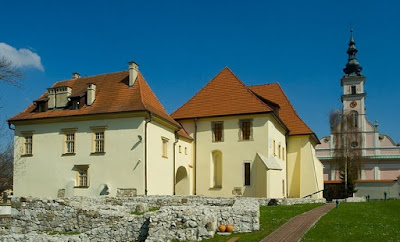 B] The Aboveground World is located in Żupny Castle, built on the hillside above Wieliczka, started under the C14th reign of Casimir III the Great and compl­eted in the C16th reign of Sigismund I the Old. It was built in a square form­ation, in­cluding liv­ing quarters outside the castle walls. Until 1945, this defensive castle was the administ­ra­tive and business headquarters of the salt mine.

The Saltworks Castle has a great collection of salt cellars – the oldest, silver Baroque salt cellar was made in the C17th in Augsburg. The most interesting include the por­c­elain salt-cellars with figurines of African girls carrying baskets, made by the Meissen manufacturers. My favourite collection exhibits the small works of salt art: silver saltshakers and dishes, armoured strong boxes, bronze ornam­ents and the C16th silver-mounted horn of the Diggers Brotherhood, the treasure showing the mine's wealth. The Gothic Hall displays portraits of mine managers. 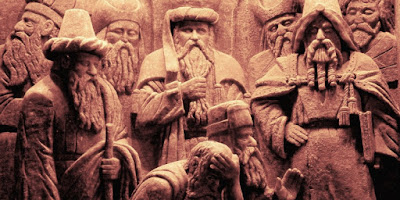 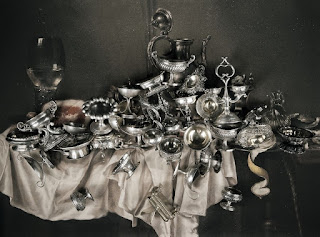 The Krakow Salt Works Museum Wieliczka duration of sightseeing tour about 3 hours in total with the route length of about 4km. Tourists can only visit the mine with a guide.

C] World War Two
The complex of Kraków-Płaszów concentration camps was located nearby and slave labour was readily available. So the mine shafts were used by the Germans to create war industries here, doubly suitable because the underground spaces were safe from Allied bombing raids. How ironic that thousands of Jews were trucked from the slave labour camps in Plaszow and Mielec to the Wiel­iczka mine; ever since the laws of Polish king Sigimund August (mid C16th), Jewish settlement in Wieliczka was banned until 1867.

As soon as the Soviets were about to liberate the area, the German war industry was disassembled and transp­orted to Lieb­enau slave lab­our camp in the Sudetes mountains. The Jew­ish lab­ourers were trucked to camps in the Czech Republic and Austria.

In 1978, the Wieliczka salt mine was placed on UNESCO World Heritage Site because it reflected all the historic stages of devel­opment in mining techniques from C13th-C20th, while the preserved devices and tools documented the old systems of working the deposits, drainage, lighting and ventilation of the mine in a unique manner by world standards. In 2010 a sis­ter mine 28ks apart, hist­oric Bochnia Salt Mine, was added to the list of UNESCO World Her­it­age sites. In 2013 Żupny Castle was added to UNESCO’s World Heritage Site.

Hello Hels, These salt works are fascinating. One thing I wonder is whether the salt-laden atmosphere wouldn't be injurious to the paintings and especially the silver displayed there. The Cleveland area also has deep salt mines, but there is no built-in art--its all commercial.
--Jim

My Polish blogmate, Gosia, has posted about the salt mines in the past. Most interesting.

I have seen many photos of paintings in salt mines during WW2, almost always covered in wooden boxes or hessian bags. The advantage of being so far below ground was the constant low humidity and cool temperature.

Silver shouldn't actually touch salt, so I assume the silver art objects are locked away in glass

I will look for Gosia's post(s), many thanks. I knew about salt mines in Germany and Austria, but not in Poland. So this has been a great learning experience ... as blogging often is.

My parents were from Crakow, a very cultured city before 1939. I went on a Roots Tour at uni and saw where their house and factory had been.

I have not been on a roots tour, but my husband took his mother "home" for the first time since they came to Australia in 1951. Joe remembered next to nothing from his childhood and loved every bit of their 1994 trip. His mother remembered everything from her childhood and from WW2, and cried constantly in her home town and in Budapest.

It seems that once we have seen 30486 Gothic cathedrals or 9792745 Deco picture theatres, we think we have seen them all. But how many underground chapels, staircases, chandeliers and sculptures have you seen created from salt?

Once you mention Pope John Paul the II it rang a bell. I heard that working in mines had a positive effect on him which made him understand human kind.
Coffee is on

What an amazing man he was. Pope John Paul II had important connections with the area.
a] He grew up in a town just south of Krakow (Wadowice) and went to university in Krakow itself
b] worked during WW2 as a a manual labourer in a limestone quarry
c] saved a number of Jewish children, just as they were to be deported, and
d] actually visited Wieliczka Salt Mine in person as pope, and had a statue made in his honour.