Did the Bayeux Tapestry prove the existence of a lost Aryan master race?

William Duke of Normandy defeated Anglo-Saxon King Harold II at the battle of Hastings in Oct 1066, a triumph famously recorded in the Bayeux Tapestry. Duke William became the first Norman king of England and transformed the face of Anglo-Saxon England: he secured his hold on the lands he had invaded, replac­ing the English ruling class with Norman counterparts and building defensive fortresses at strategic points. The feudal system was introduced; the church was re­organised and England’s links to Europe were strengthened.

King William’s half-brother Odo, the Bishop of Bayeux, became the Earl of Kent. Odo was amassing an immense fortune coming from Eng­land, and continued rebuilding the Bayeux cathedral at his own expense. Odo had greatly admir­ed the wall hangings which were used to adorn Kentish sanctuaries. And knowing the splendid celebrations that would accompany the consec­ration of his French church, he commissioned a hanging that glorified King William’s exploits in England. The Romanesque cathedral Notre-Dame de Bayeux was complet­ed and dedicated in 1077, soon after the conquest of England. 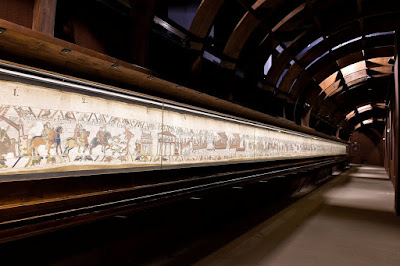 This stunning art work told the story of a historic and bloody war between the French and the English in 1066. The 70-metre long textile depicted the events leading to the Battle of Has­t­ings and after. So why would this ancient Norman relic be of great int­er­est to modern German scholars and to Nazi art collectors during World War Two?

In 1935 Gestapo boss Commander Heinrich Himmler established a re­search arm of the SS, the Ahnenerbe-Society for the Study of German Herit­age. Its role was to promote archaeological investigations of sites that might have been associated with early German settlement i.e. devoted to proving the existence of a lost Aryan master race and Germany’s descent from the Vikings. Ahnenerbe projects included experiments with high altitude and with freezing... on the inmates of Dachau, and Dr August Hirt’s collection of skulls from various races.

Ahnenerbe art historians focused on establishing the Tap­estry’s credentials as an Aryan art work, on the grounds that the Normans were descended from the Vikings. But other interest groups wanted to keep the Ahnenerbe’s hands off the Tapestry, not just the French. The Einsatzstab Reichsleiter Rosenberg was the body responsible for the regime’s collecting of art works from every country they conquered. This organisation, headed by Adolf Hitler’s leading ideologue Alfred Rosenberg, was one of the main Nazi agencies engaged in the plunder of cultural valuables in Nazi-occupied countries.

As Hitler’s armies marched into Poland, France went on alert re its national treasures. Following the occupation of Paris in June 1940, the Bayeux Tapestry was taken off display by French museum workers. It was wrapped in sheets, dusted with protective powder, packed into a zinc-lined crate and hidden in the Louvre’s cellars for safekeeping. 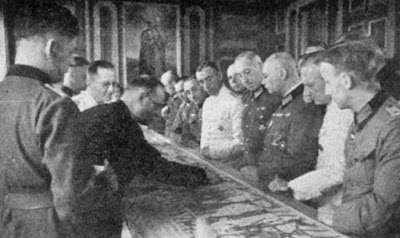 The Nazis admiring and planning to study the Bayeux Tapestry.
June 1941
Credit: The Bayeux tapestry : the life story of a masterpiece

In 1940 Reich Minister Joseph Goebbels discussed the propaganda value of Germany bringing home a work which showed an Aryan people conquering Britain. Goebbels ordered a team of art historians to analyse the Tapestry, to demonstrate that it was a purely Nordic and Aryan treasure that celebrated the Germanic virtues of warfare. How apt, then, that in Oct 1941 Lord Haw Haw gloated on German radio that the Tapestry would be toured around neutral nations to warn of yet another imminent invasion of England!

In Aug 1944, with Allied forces marching back into France, Heinrich Himmler urgently wanted the Bayeux master­piece. So he ordered SS men to grab it from the Louvre before Paris was totally pulverised by Hitler’s withdrawing forces. The stated goal was to open a National Socialist art museum in Germany, but apparently Himmler had reserved a space for the great Aryan artwork in his own, renovated medieval Wewelsburg castle in Westphalia. Himmler sent the head of the SS chiefs in Paris a coded order reading: “Do not forget to bring the Bayeux Tapestry to place of safety.” And take it back to the heart of the Reich: Berlin.

Himmler was so obsessed with the Arthurian legends and the Knights of the Round Table that he created Camelot in Wewelsburg Castle. The castle would be the home to the Holy Grail, the chalice from which Christ drank at the Last Supper, whenever it might be found by Himmler’s SS researchers who had been shipped to Tibet.

National Archives files revealed Bletchley Park in Bucks was intercept­ing messages to Nazi police stations and SS barracks, even before war broke out. It amassed thousands of intercepts from police units on the eastern front and police headquarters in Germany. And code breakers at Bletchley Park opened a dossier on the Nazi art looting operations, after receiving urgent messages sent by the Russians in the late 1942.  A Military Intelligence officer wrote: “The work of plundering is carried out by a special SS battalion. “Their task was to rob churches, museums and galleries and bring their booty to Germany. “These prizes were reserved for the use of the higher Nazi bosses in their villas. Lesser bosses had to be content with rare books and vases.”

But it wasn’t until re­cently that wartime documents reveal­ed how the Allies uncov­ered the plan of Heinrich Himmler, decrypting the radio message at Bletchley Park. The British decod­ers warned the French Resistance who were able to occupy the Louvre before Himmler’s men turned up to steal the Tapestry. When the Nazis arr­ived at the Louvre 48 hours later, with two trucks and filled petrol drums to get back to Germany, they were met with bullets. When Paris was liberated just days later, the fragile embroidered linen was found safely in a crate in the Louvre cellars. 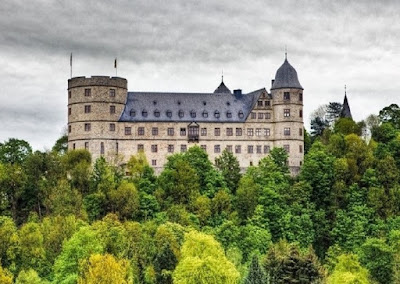 Wewelsburg Castle in Westphalia was rented/bought by Heinrich Himmler
Used for the study of ancient history and archaeology, it was a training facility for the SS.

So thanks to the great work of the Russians and British, the precious textile was saved from becoming just another piece of the Nazis’ plundered artworks. A year later, in Nov 1945, the Tapestry return­ed to the Louvre for an exhibition coinciding with Churchill’s visit to Paris. Then it returned to Bayeux where it has been displayed and protected ever since... in the special Bayeux Exhibition Centre.

Decades later the Bayeux Tapestry will leave France for the first time in 950 years when it goes on display in the UK. The French president announced at an Anglo-French summit that the artefact depicting the Norman invasion of Britain in 1066 will be loaned to the UK in 2022.

Ahnenerbe and other Nazi scientific organisations were very scholarly, probably explaining why German doctors, scientists and archaeologists were pleased to be involved in the projects. It didn't seem to matter that the team organisers were politically motivated and the scientific goals were bizarre.

In a flash, the Bayeux Tapestry could have been destroyed or stolen. I visited Bayeux, but didn't realise that surviving intact was such a fluke.

Hello Hels, This isn't the first or last time art was misused for ideological/political purposes. It comes under the general heading of "rewriting history."
--Jim

nod. Nowadays we forget that the Nazis' scientific organisations were seriously scholarly, well funded and their results well published. I would have thought in the worst years of WW2, they would have had higher priorities than demonstrating that the tapestry was a purely Nordic and Aryan treasure that celebrated the Germanic virtues of warfare.

But.... even today, money pours into absurd, politically motivated research eg finding a relationship between injections given in early childhood and autism.

Apart from the risk of falling apart from old age, there have been serious threats to the tapestry's existence. In 1562 during a period of fierce religious conflict, a Protestant mob stormed the cathedral at Bayeux during Mass, ransacking the building and its treasures. The Tapestry luckily survived in storage.

Then in 1792, the sixth Calvados Battalion attempted to use the Tapestry as cover for a requisitioned wagon, until police commissioner Lambert-Léonard Le Forestier recognised the significance of the object and issued a recovery order in exchange for a more suitable canvas wagon cover. At the last moment it survived.

In 1803 Napoleon Bonaparte used the tapestry's conquering narrative to promote his preparations to invade Britain. So it was carried around, being displayed at the Musée Napoléon in Paris and other places. Good grief :(

not the first time I have heard of a nation or community using art for ideological purposes. And not just the visual arts... we should add science, performing arts, child rearing, religious beliefs and any other study that lends itself to serving the needs of the team leaders.

I haven’t heard this story before. It’s scary to think how many times it has come close to looting or destruction!

Ephemeral art usually means any kind of art that is made with materials or techniques that typically don't last eg works on paper. But I am beginning to think that nothing is permanent - bejewelled art is stolen, sculpture is torn down by political or religious enemies, silks perish etc etc.

Ahnenerbe would never have intentionally damaged the Bayeux Tapestry... they loved the objects they found, returned to Germany and studied closely.

We recommend The Bayeux Tapestry: The Life Story of a Masterpiece by Carola Hicks. Pages 204 on cover this topic very well.

many thanks. I added the photo credit straight away.

Of the Hicks pages that I could read on line, Ahnenerbe's commitment to researching the Bayeux Tapestry was fascinating.

I had no idea that the tapestry had been targeted for theft.

I saw it a few years ago, it is fascinating. If it does come to Britain I shall have to try and see it again.

I spent quite a lot of time in Bayeux and loved every moment. Odo, Bishop of Bayeux, knew what he was doing.

The French are quite worried (for good reason) about sending the Bayeux Tapestry abroad, so when you get the chance to see the treasure in the UK in 2022, grab it.