The rise and rise of Fascism in inter-war Britain was both powerful and nightmarish. I had little trouble researching Sir Oswald Mosley, the BUF and its organised opposition, The 43 Group; the Battle of Cable St in the East End of London; Archibald Ramsay and the Right Club; two of the Mitford sisters; and King Edward VIII and Wallis Simpson. The elephant in the room was always going to be William Joyce, and that was a story clouded in secrecy. So thank you to The Heretical Press for presenting new evidence.


William Joyce (1906–1946) was born in New York to an Irish Catholic father, and when he was a child the family left the USA and moved back to Ireland, settling in County Mayo. Because the family was very Cons­ervative and pro-Union, they were very unpopular with the local Sinn Fein supporters. Joyce's early life was marked by violence, but luckily for him he was very athletic, strong and brutal.

In 1924, while working as a patrolman at a Conservative Party meeting, Joyce was silently trapped by men in black; he received a deep razor slash that ran across his right cheek to his mouth, leaving a permanent scar. In an incident that he relived over and over in his mind, Joyce claimed his attackers were Jewish communists.

In 1932, Joyce joined the British Union of Fascists (BUF) and was much admired for being brutal with his knuckledusters in fights against the anti-Fascists. More surp­ris­ingly Joyce became a leading speak­er, praised for his power of oratory. “His speech was elect­rifying, so terrifying in its dynamic force, so vituperative, so vitriolic. 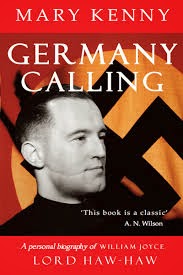 
Two years later, Joyce was promoted to the BUF's Director of Propaganda under Sir Oswald Mosley. But a devastated Joyce was sacked from his paid position in the party by Mosley in 1937. By the time war broke out, Joyce was adamant that Britain was being led into another pointless war and the governments of Neville Chamb­erlain and Winston Churchill were betraying their people.

In Aug 1939 Joyce fled from the UK when tipped off about the government's plan­ned internment of Fascists. He escaped to Germany where friends put him in contact with the Private Secretary to Germany's For­eign Minister von Ribbentrop. Just a fortnight after the out­break of war, he was appointed Editor and speaker for the German transmit­ters for Europe in Berlin.

Joyce became the main German broadcaster in English, and became a naturalised German citizen. The English-language propaganda radio programme Germany Call­ing was broadcast to UK audiences on the mediumwave station Reichssender Hamburg and by shortwave abroad. The programme started in Sep 1939 and continued until April 1945, when the British Army was finally victorious.

Through such broadcasts, the Reich Ministry of Public Enlighten­ment and Propaganda wanted to demoralise both British and British Commonwealth troops and English-speaking citizens, and to spread German propag­anda. For example the German broadcasts happily rep­orted on the loss of Allied aircraft and ships. Allied troops and civilians often felt they had to listen to Lord Haw-Haw's broadcasts because they offered the only details available from behind enemy lines concerning the fate of Allied soldiers. 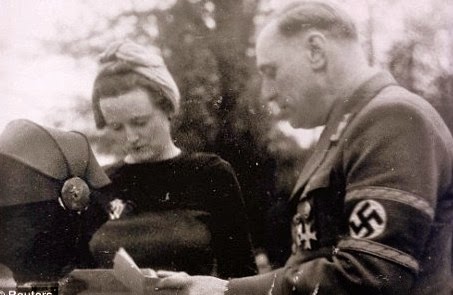 Joyce was capt­ured by British forces in northern Germany just as the war ended. He was taken back to Wandsworth Prison in Britain, tried, found guilty and hanged for treason in Jan 1946.

Why did he betray his own adopted British nation? Facing death Joyce wrote “In death, as in this life, I defy the Jews who caused this last war, and I defy the power of darkness which they represent. I warn the British people against the crushing imperialism of the Soviet Union. May Britain be great once again and in the hour of the greatest danger in the west may the Swastika be raised from the dust, crowned with the historic words: You have conquered never­the­less. I am proud to die for my ideals; and I am sorry for the sons of Britain who have died without knowing why”.

Did he believe it was worth risking the lives of 40 million British citizens to exterminate a tiny Jewish population? Or was he admonishing the Allies for fighting a war secretly organised by the Jews? In either case he was being disingenuous! His radio voice suggested he was totally thrilled when London was blitzed and Coventry almost disappeared from the map!

Commentators have since argued that Joyce achieved nothing except a reputation as a comical, almost pathetic, figure in Britain. But this was never true. The Nazis were de­lighted that Joyce’s anti-Semitism never faded in its viru­lence. For his efforts Joyce continued to live a comfortable life in Berlin and in Sep 1944 was awarded the Cross of War Merit 1st Class with a certificate signed by Adolf Hitler himself. And from the other side, there was also an impact. The an­x­ious mood in Britain was well depicted in the wartime film Sherlock Holmes and the Voice of Terror (1942), starring Basil Rathbone. In the film, Joyce's broadcasts were shown to pred­ict actual defeats, thus seriously undermining British morale.

Some British media and list­eners used "Lord Haw-Haw" as a generic term to describe all English-language German broad­casters using an unintentionally comic upper-class accent. The same nickname was also applied to some other broad­casters of English-language propaganda from Germany. eg James R. Clark was a young English broadcaster and a friend of British Fascists William Joyce and and Unity Mitford. James Clark's mother Dorothy Eckersley showed great interest in German National Socialism and Fascism, and moved to Germany with her teenage son, enrolling him in a German school. Clark and his pro-Nazi mother were both tried for treason and she was gaoled after the war.

I don’t believe in capital punishment in ANY event, but I do understand the British government’s reluctance to let a war-time traitor go on with his role. Even had he been given a life sent­ence with no parole, he would certainly have become a celebrated martyr to the Fascist cause in Britain. I suggest this proves how influential Lord Haw Haw truly was during the war - the British government felt hanging was the only possible outcome.

I've not heard Lord Haw Haw used in a generic sense. What a curious life, beginning with the unusual move to Ireland from the US.

While in Nazi Germany Diana Mitford talked to Hitler about the possibility of establishing a pro-Nazi radio station in Britain. In 1938 she was told there were plans to build a transmitter on a North Sea island.

The project may have failed because of the outbreak of the Second World War, but it shows how important the British Fascists thought German radio was.

William Joyce was constantly moving, always angry and often violent - USA to Ireland to Britain to Germany and back, involuntarily this time, to Britain.

I can certainly understand Joyce hoping that Germany would win the war and crush Britain, If that was what he believed. But he denied being a traitor to Britain!

Yes the British Fascists thought it was important. But the same evidence also establishes how important the Germans thought their own radio station, broadcasting in English into Britain, was.

In the middle of the war, when resources were so short in Germany, the Germans clearly felt the money spent on radio propaganda was worthwhile. And the money keeping Joyce and wife in splendid comfort.

Here is a near repeat of the Lord Haw Haw Story. Different war, same impact.

The most influential pro-Islamic State Twitter account to be followed by foreign jihadis was shut down after a Channel 4 News investigation uncovered the identity of the man behind it. Shami Witness, an executive in Bangalore, spent his days sending thousands of tweets of propaganda about the Islamic State militant group, acting as the leading conduit of information between jihadis, supporters and recruits.

Shami Witness had 17,700+ followers. Two thirds of all foreign fighters on Twitter followed him. He spoke to British jihadis regularly, before they leave to join the Islamic State, after they arrived, and if they died he praised them as martyrs. His greatest glee was reserved for the deaths and rapes of Kurdish fighters and the execution of aid workers from abroad.

Oh my goodness. I don't know anything about Twitter personally but I do understand that every generation will use the medium that is best for their purposes.

Shami Witness, living in executive comfort in India, seems very similar to Lord Haw Haw in that they both celebrated mass deaths in their own nations. Perhaps Shami Witness was worse ...since he was actively recruiting for the IS war machine.

Englishman Norman Baillie Stewart entered Sandhurst Military Academy and in 1927 was commissioned into the Seaforth Highlanders. He fell in love with a German woman on holidays, failed in his bid for German citizenship and agreed to spy for Germany by 1931. He stole secret plans from Aldershot Military Library and was imprisoned for five years in the Tower of London.

In 1937 Baillie Stewart went to live in Austria and when war broke out, he made propaganda broadcasts on the Germany Calling radio programme in an exaggeratedly upper class English voice. He became one of the men associated with the nickname Lord Haw Haw.

In 1945 he was arrested in Austria, pleaded guilty to assisting the enemy and was sentenced to another five years' imprisonment.

I didn't know the name Baillie Stewart before, but I did know there were a few Lords Haw Haw. Many thanks.

However your article adds another consideration - why did the various Lord Haw Haws give up their nation, family, work, home and friends to travel to Germany in the first place? A commitment to Nazi ideology (eg Joyce) or for the love of a woman (eg Baillie Stewart) or because the mother went and the son followed (eg James R Clark)?

I am looking forward to the lecture this afternoon. Of all the British broadcasters caught in Germany at the end of the war, only Margaret Lady Haw Haw was not charged with treason. What happened to her?

Helen I just found an amazing connection to Margaret and William Joyce.

Heather Piercey has spent decades coming to terms with the fact that the father she adored broadcast Nazi propaganda for Hitler. Francis Beckett meets Lord Haw-Haw's daughter, in The Guardian, https://www.theguardian.com/politics/2005/dec/05/past.secondworldwar.

MI5 sent a memorandum to the head of the British Intelligence Bureau: "It has been decided by the authorities in the UK not to prosecute this woman, in effect on compassionate grounds. There is no lack of evidence implicating her in the treasonable activities of her late husband; but the authorities do not think she need be punished further, and would like her to be returned to Germany as a German subject."

However Margaret Joyce was British born! She didn't take out German citizenship until after the couple escaped to Germany in 1939.