The meaning of British surnames - Ancestry.com

The names Australians gave new born babies was a widely cited post, covering the most popular first names given to boys and girls in Victoria since 1900.


But I have never tackled surnames, given that everyone of my generation seemed to come from Poland, Russia, Ukraine, Czechoslovakia, Hungary or Germany. Ancestry shows that many families actually have surnames passed down from ancestors in Britain. Last names were not widely used until after the Norman conquest in 1066, but as the country’s population grew, people found it necessary to be more specific when they were talking about somebody else. Thus arose descriptions like Thomas the Baker, Norman son of Richard, Henry the Whitehead, Elizabeth of the Field and Joan of York that ultimately led to many current surnames.

There are perhaps 45,000 different English surnames, but most had their origins as one of these types.

In medieval England, before the time of professional theatre, craft guilds put on Mystery or Miracle Plays, which told Bible stories and had a call-and-response style of singing. A part­icipant’s surname eg King, Lord, Pope, Virgin or Death, may have reflected a role which some people played for life and passed down to their eldest son. 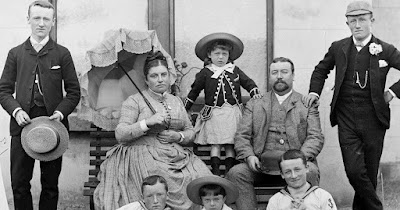 3. A place name
A surname may have pointed to where a person was born, lived, worked or owned land. It might be from the name of a house, farm, hamlet, town or county eg Bedford, Boroughs, Burton, Hamilton, Hampshire, Kipling, Lincoln, Spalding, Sutton, Thorpe, Trent, Wakefield, Warwick, Wilton.

Those descended from landowners may have taken as their surname the name of their holdings, castle, manor or estate eg Staunton. Windsor is a famous example in the British royal family.

Some surnames showed that the family came from another country eg Britten, Dane, Fleming, French, Lubbock/Lubeck.

Some surnames honoured a patron. Hickman was Hick’s man (Hick being a nickname for Richard). Kilpatrick was a follower of Patrick.

If readers are wondering whether their family name was English, Ancestry invites them to plug their surname into the Ancestry Last Names Meanings and Origins widget.

I have added many other surnames from Behind the Name and from the BBC.

Hi Hels - it's always fascinated me ... names tell us so many things be it of people, or places or landscape ... lovely to read and remind me of home! Cheers Hilary

I already know the meaning of my name. It is in the Scottish ancestral list. I don't usually think much about surnames. Interesting.

My mother's name was Stern which could have meant star in German or serious in English. People moved around Europe.

Most people know about their parents and grandparents, but few know their family history in earlier generations. That is probably why we love programmes like Find My Family and Who Do You Think You Are?

Ancestry.com kept talking about English surnames, not British surnames. They DID add a Scottish paragraph but it was almost peripheral to the main thrust of their research.
This was strange, since the Scottish diaspora has always been huge.

Good on you for finding your dad's family name.

That is so true. My in-laws lived in Germany, then Czechoslovakia and finally Hungary, before moving to Australia. And that was just in the 20th century!

My own dad's family name, Ulman, meant either that the family came from Ulm in Baden-Wurttemburg or it was a patronymic surname from the first name Ullrich.

What can Findmypast tell you about your surname?
Search our database to cross-reference all our records and discover what your surname reveals about your family history.

Hello Hels, My own surname is a common one, but only by coincidence--I am not related to others with this name outside my direct family. In Chinese, most surnames are also words with common meanings, but when used as surnames one thinks of them without their attached meaning, but rather just as a name. In English, similarly, if a name has an obvious meaning, like Green, Cooper, Stevenson, etc., the meanings of those words do not come to mind unless we are concentrating on it.
--Jim

Thank you. Until university, I didn't meet any Smiths, Jones, Williams, Browns and Johnsons etc. At my school, after the war, everyone was a Goldman, Hirsch, Slonim, Berkovitz or Cohen. The problem now is that once families started anglicising their surnames, it became harder to trace their origins. When the Berkovitz family became Burke, might their surname have been a patronymic from the Yiddish first name Berke? the place where the family lived - Burgh in Suffolk? the tree birch? or something Norwegian?

Agreed. I suspect that the meanings surnames do not come to mind unless we are concentrating on them in EVERY language. It is something you were simply born with. But when my children were born, and when all our friends and relatives were having babies, we talked a great deal about first names. Who would the baby be named after? What did that name mean? Would the child like the name we chose?

I only started thinking about surnames when my father had his adoption papers released later on. Which surname did he take and why? What did the names mean?

Researching the origins of surnames is fascinating. Especially when it is an obscure one.

you have come to the right place:) Surnamedb said that Pie, Pye, Pyman and Pyer is of early medieval English origin. Firstly it can be a nickname for a cheeky, talkative person (from magpie). Or the name may be a metonymic occupational surname for a baker of pies etc etc. Throughout the centuries, surnames in every country have continued to develop, often leading to astonishing variants of the original spelling.