"Henry Ford and the Jews: The Mass Production of Hate by Baldwin

Henry Ford and the Jews: The Mass Production of Hate is by Neil Baldwin (published in 2002).

Baldwin reported that car manufacturer Henry Ford (1863-1947), inventor Thomas Edison and tyre magnet Harvey Fires­t­one used to go on motor-car expeditions to the Appalachian and New Eng­land hills. Normally, when the great business tycoons of the early C20th met, most of them generally kept their views hidden be­hind the fences of their very private country clubs. Ford, on the other hand, advert­ised his anti-Semitism almost as widely and loud­ly as he promoted his Model T. As did aviator Charles Lindbergh.

In 1919, Ford purchased The Dearborn Independent,  then a small newspaper published in the Michigan city where his factory was. For the next eight years, the weekly publication became a veh­ic­le for his bigoted political views. One of the paper’s chief targets was the “International Jew”, a sinister figure cited as the root cause of WWI. For 91 newspaper editions, the weekly paper announced a variety of Jewish-evil-influenced major stories in its headlines. 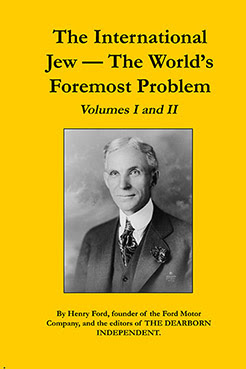 The most popular and aggressive stories about the Jewish menace were then selected and reprinted in four volumes in 1920 called The Inter­national Jew: The World's Problem. To increase sales, Ford sent a memo to his car dealers saying that ev­eryone who bought a Model T would have to buy a sub­scription to his newspaper as well. A series of articles detailed Ford's belief that a cabal of Jews, a few super-men of the despised race, was plotting to subordinate the proud Gentile race. It was tran­slated into Ger­man, in 1922, and published in Germ­any where the book was a bestseller.

NB Ford was the only American honoured enough to be named in Hitler's Mein Kampf, published in 1925!

In 1927, a Jewish lawyer Aaron Sapiro sued Ford for defamation. In court, Ford refused to take responsibility for the articles that appeared in his newspaper. During the trial, the editor William Cameron testified that Ford had nothing to do with the editorials even though they were under his byline. The suit ended in a mistrial, but amongst all that bad publicity, Ford agreed to a private settlement with Sapiro. Ford issued a pissy public apology for his newspaper’s years of defamatory content and quickly sold the Independent.

We might understand how deeply embedded anti-Semitism was in the culture of Ford's youth. But why did Ford go on his anti-Jewish crusade so publicly - with prejudices that wiser businessmen kept to them­sel­ves? Because Jews didn't accept Jes­us as the Messiah?

Note that Ford Motor Co. has long been under fire because its German subsidiary used slave laborers during WW2 while building military vehicles for the Nazis. Eventually the company issued a lengthy report in 2001, finding itself innocent. Yet Ford had eagerly collaborated with the Nazis, helping Hitler prepare for war and, after the 1939 invasion of Poland, conduct the war. Ford’s behaviour in France following the German occupation of June 1940 showed its collaborationist posture even more disturbingly.

In late 1941, Ford Werke's board worried that the USA would enter the war in support of Britain and the government would conf­iscate the Cologne plant. To prevent such an outcome, the Cologne management wrote to the Reich Commission that year to say that it questioned whether Ford must be treated as enemy property, even in the event of a USA declaration of war on Germany. Ford became a purely German company and took over all obligations so succ­ess­fully that the American majority shareholder actually contributed to the develop­ment of German industry.

So Hitler's respect for Henry Ford was clearly based on his apprec­iation of Ford's production techniques, not on their shared anti-Semitism. “We look to Heinrich Ford as the leader of the growing Fas­cist movement in America; I regard him as my inspirat­ion”, Hitler said in an inter­view.

Ford's publishing arm also distributed The Protocols of the Learned Elders of Zion, a book that was to become the bible of modern anti-Semitism. A supposed master plan for Jewish world dominance, the book was actually a crude forgery, as Ford himself knew.

In 1933 Ford came under intense pressure and was sued for libel by a businessman named by Ford as a key member of the Jewish conspiracy. Ford settled out of court. “I am not a Jew hater, and I have never met Hitler”, he wrote in a statement to a Jewish publication that was reprinted by the Hearst news­paper chain. Yet 5 years lat­­­er Ford received the Grand Service Cross of the Supreme Or­der of the German Eagle, a Nazi medal presented on his 75th birthday. Ford receiving the Grand Service Cross of the Supreme Or­der of the German Eagle,
presented in Michigan in July 1938

by the two German consuls Kapp and Heller.


Look at the date. Hitler was becoming militaristic in Europe, and Americans were beginning to fear another World War. Americans had little time for the paranoid fantasies of the car king, and the Ford Motor Company was distancing itself from the views of its own founder.

Henry Ford was not the only head of industry who opposed America's entry into WW2. But he may have been one of the few who declared WW2 as the product of greedy financiers who sought profit in human destruction. Furthermore he announced that the torpedoing of American merchant ships by German submarines was the result of conspiratorial activities undertaken by Jewish financiers and war-makers.

During the war, the car companies established a reputation for themselves as "the arsenal of democracy" by transforming their production lines to make airplanes, tanks and trucks for the armies that defeated Hitler. They denied that their huge business interests in Nazi Germany led them, wittingly or unwittingly, to also become "the arsenal of fascism."

Into his final decade of life, after several strokes and mental crises, Ford's anti-Semitism became even more paranoid than earlier on. Ford’s private notebooks show that he continued to view Jews as part of an "anti-Ford Motor Co conspiracy", involving financiers, the New Deal, labour unions and his major auto competitors. He died in 1947.

I think most people have a benign view of Ford. Clearly they need to be educated, as I have been.

I have a conference paper from 20 years ago I can email to you. Ford said he was a pacifist. Yet every time the Germans destroyed another European nation, his company in Germany revamped their equipment to successfully make jeeps and planes. War in Europe was a profitable business.

Hello Hels, I have heard some of these facts intermittently, but never seen them all assembled like this. No wonder so many Jewish people still won't buy Fords! Ford was a big part of the world that surrounded and pressured to influence Sinclair Lewis's Babbitt. Akin to the discussions we have had via your blog of "evil" artists/musicians versus the value of their creativity, I also question the value of Ford's charitable activities. Despite all the truly good aspects of things like Greenfield Village, at heart it really celebrates a Wasp-y version of early America, that in Ford's view would have excluded Jews and every other type of immigrant or minority.
--Jim

I have always known what sort of person Ford was, but I didn't read the Baldwin book until quite recently.

This reminds me of something important. I am giving a paper on Coco Chanel soon, another famous person for whom all records between 1933-1946 had apparently been whitewashed out of history.

Many thanks for the article, which I also found on line. It came from Michael Dobbs, Washington Post, 30th November 1998 and was called "Ford and GM Scrutinised for Alleged Nazi Collaboration".

I will add a reference to the paper in my blog post.

I always loved Sinclair Lewis' writing and his politics, but I wish someone had mentioned the connection between Babbit and Henry Ford to me decades ago. It would never have occurred to me back then.

And thank you for mentioning Greenfield Village, Dearborn. Whatever I think of one racist anti-Semitic hoon, collecting millions of car artefacts from across the country provides the basis for some important historical analysis. We can only hope that the literature and photo collections in Greenfield Village are complete.

Hi Hels - well that was a rather 'horrid' wake up call - I'd no idea ... and then the discussion in the comments - thanks to you all ... interesting to put it mildly - cheers Hilary

agreed. I have been studying historical books and journal articles for decades. Yet sometimes event have been deleted from publication for so long that we don't know what happened. Even if you don't agree with every detail of the Baldwin book, it is well worth reading.

I think most Jewish people were aware that Ford was a public anti-Semite and yet his expressed views contained the same falsehoods as those which have been widely disseminated for many years by 'lesser' people. Your article brings it all together and shows in no uncertain terms just how depraved his views were! It makes me feel slightly sick.
CLICK HERE for Bazza’s aromatic Blog ‘To Discover Ice’

If an ordinary neighbour or colleague is an anti-Semite, it makes life very unpleasant.

But if the anti-Semite is an American ambassador to the UK, the head of the greatest car company in the world, a Duke in the House of Lords, head of the FBI etc, we have a real problem. Perfectly respectable-looking people like Henry Ford, 2nd Duke of Westminster and J Edgar Hoover could have a powerful, malevolent impact on policy setting and organisational plans.