Giacomo Lorandi wrote of the pro-inoculation career of Theodore Tronchin in France and the anti-Tronchin response, to be followed by the anti-vaccination movement in Britain and the USA.

Swiss physician Théodore Tronchin's (1709–1781) clinic att­racted patients from everywhere and his reputation, esp­ecially for ground-breaking research on the prevention of smallpox through inoculation, grew. The Duke of Orleans, Louis-Philippe I (1725-85), summoned him to Paris to treat his children. His success in saving the children sparked interest in inoculation among the Parisian ar­istocracy and his rise to fame meant inocul­ation became wide­spread.

Tronchin’s work involved a tiny amounts of the smallpox virus taken from the pustule of a person afflicted with the dis­ease; it was injected into the superficial layers of the skin to induce immunity. Tronchin was a major advocate of a healthy lifestyle and phys­ical well being. He devoted time to the sick, listening to their symptoms; he sugg­ested an active lifestyle, good hygiene, outdoor activities and diet so that the body could react fully to diseases and to inocul­at­ion. He earned great popul­ar­ity in aristocratic circles, among Paris’ intellectual-artistic salons and at the royal court.

Tronchin’s access to elite groups allowed him to meet a constant stream of new patients to whom he recommended a more sober lifestyle. He renewed the air in a sick room; didn’t condemn pregnant women to a poor diet; gave children a healthier education and banned the bindings that deformed women's size. 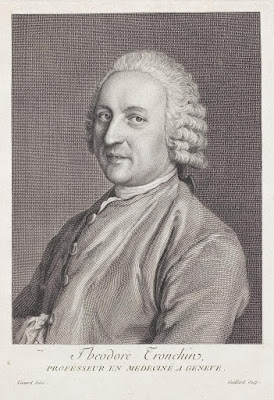 Vaccination, as developed by the English physician Edward Jenner (1749–1823) in the 1790s, came later. It was an inject­ion of a sam­ple taken from a cow suffering from cowpox. It was con­sidered safer than inocul­at­ion and was the most common method used to fight against smallpox, polio, measles and tetanus.

During the late 1800s, the mortality rate from small pox in non-inoculated infants approached 80% in London and 98% in Berlin. Inoculated children had up to a 2% mortality rate. 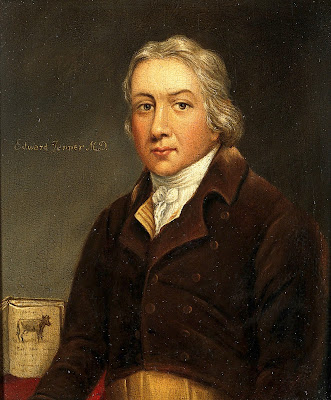 Anti Vaxxers are not just a modern phenomenon. Tronchin’s success inevitably led to a campaign of hatred against him. Ammunition in­c­luded his contribution towards making inoculation popular, his being a foreigner, a Calvinist and his successes. His colleagues expressed doubts about the scientific basis of his inoculat­ions. Similar attacks came from the Church and from the University of Paris’ medical faculty.

So Paris’ medical est­ablishment revolted against him, especially his inoculation. He was labelled a medical pirate, who pract­ised for money alone, treated only those he believed capable of recovery and whose fame came from his rejection of both tradit­ional remedies (opium, emet­ics, quinine) and com­mon treat­ments (purgat­ives, blood lettings). His most vocal crit­ics were eminent doct­ors who criticised Tronchin’s empiricism and the simp­licity of his remedies. As did other opponents eg Prof Jean Astruc.

Widespread smallpox vaccination in Britain began in the early 1800s, following Edward Jenner’s cowpox experiments, in which he showed that he could protect children from smallpox if he infected them with lymph from a cowpox blister. But Jenner’s ideas were novel for Britain and were met with immediate public criticism. The rationale for criticisms of Jenner’s vaccinations included sanitary, religious, scientific and political objections.

Critics of vaccination opposed the smallpox vaccine in England in the mid to late 1800s. Anti-vaccination leagues emerged, as well as more recent vaccination controversies eg surr­ounding the efficacy of the diphtheria and tetanus immunisation and the MMR (measles/mumps/rubella).

The Vaccination Act of 1853 ordered mandatory vaccination for British infants up to 3 months old, and the Act of 1867 extended this age requirement to 14 years, adding penalties for vaccine refusal. The laws were met with immediate resistance from citizens who demanded the right to control their bodies and those of their child­ren. The British Anti Vaccination Leagues formed in response to mandatory laws, and numerous anti-vaccination journals sprang up.

Mass demonstrations and general vaccine opposition across Britain led to a commission designed to study vaccination. In 1896 the commission ruled that vaccination protected against smallpox, but suggested removing penalties for failure to vaccinate. The Vac­cination Act of 1898 removed penalties and included a conscientious objector clause, so that parents who feared vaccinat­ion’s safety or efficacy could be exempted.

Smallpox outbreaks in the USA led to pro-vaccine campaigns and anti-vaccine activity. The Anti Vaccination Society of America was founded in 1879, following a visit to America by leading British anti-vaccinationists. Other Anti-Vaccination Leagues followed in the 1880s.

The pustule-covered hand of a baby with a mild case of smallpox.
Centre for Disease Control and Prevention

In 1998, British doctor Andrew Wakefield recommended in­vest­igation of the relationship between bowel disease, autism and the MMR vac­cine. He alleged the vaccine was not properly tested before being put into use. The General Medical Council found that Dr Wakefield had a fatal conflict of interest; he’d been paid by a law board if he could support a litigation case brought by parents who believed that the vaccine had harmed their children. Dr Wakefield was struck off from the medical register in Great Britain. Since 2011, a large number of research studies assessed the safety of the MMR vaccine, none of which found a link between the vaccine and autism.

The next blog post will examine another difficult medical history.

The level of resistance and opposition to the MMR vaccine is still very prevalent today, sadly. It has long been the case that we fear what we don't understand and the health of our children is an emotional issue so it is perhaps understandable. However, the efficacy has been proved beyond any doubt. The need for compulsory vaccine is a result of the resistance to parents.
CLICK HERE for Bazza’s less-frequent Blog ‘To Discover Ice’

Anti vaccine. Anti fluoride. I have no time for any of them, and while science can get things wrong, and certainly the British Medical Journal or Lancet were wrong when they published the findings of the charlatan Wakefield, I put my trust in medical science.

Was it Jenner who noticed that milkmaids, the milkers of cows were resistant to smallpox?

It was very brave of the government of 1853 to order all children to be vaccinated and such a shame the penalties were removed, but in Australia, they are back.

Medical researchers and practitioners were totally devoted to improving community health. Naturally there were mistakes made but the end goal was never lost.

I suppose some parents will take their children into hiding if vaccinations are made compulsory. But the Health Dept would then have to check every child starting kindergarten and primary school to ensure that unvaccinated children are not allowed to enter any place where healthy children gather. The Australian Child Health study of 2017 found most Australian children (95%) were fully vaccinated but I would not have wanted my children to be mingling with the other 5% at school or in the playgrounds.

Edward Jenner was indeed the young country lad who head a milkmaid boast "I shall never have smallpox for I have had cowpox. I shall never have an ugly pockmarked face." If the story was true, he remembered the details until he was old enough to study their implications.

Peter Curson wrote: Between 1789 and 1917, Australia experienced at least 15 epidemics of smallpox with case fatality rates of up to 30%. After 1853 all Australian colonies with the exception of NSW and Qld passed compulsory smallpox vaccination acts, but only in Vic and S.A was the legislation pursued with any vigour. Even during the 1913-17 smallpox outbreak in NSW when 500 000+ sought vaccination, attempts to pass a compulsory vaccination bill through the NSW Parliament foundered.

I draw two conclusions from the heroic work that medical researchers did, when they were facing bitter opposition to a new medical procedure.
1. EVERY step of the process and EVERY result to the patient had to be published openly. No other scientist could have learned about the successes and failures, had it not been for the British Medical Journal, Lancet etc.
2. Once a procedure was published by one medical researcher, it then had to be repeated with other populations over and over again. Only thus could the validity and reliability of the procedures be confirmed or rejected.

An interesting topic . its interesting to hear of early anti vaxers particularly when you consider that they saw much more often than we do now , the results of not vaccinating . I had always thought that the modern doubts stemmed from losing touch with the fragility of human life given our great health system, But no people have always been stupid and been prone to believing in conspiracy theories. Very sobering when you consider that we have a great need to act rationally with regard to Climate change !!!!

Yes indeed. the last serious epidemics of smallpox that I could find were in Northern Australia (1865-1870); Sweden (1873-4); the USA (1902); Nigeria (1958) etc. The worldwide vaccination campaigns against smallpox ended in 1979, apparently because the disease had been wiped off the face of the earth by then.

Unless smallpox returns again, our future debates will be about other vaccination campaigns. Whooping cough, for example, remains a major crisis in developing countries, where mass vaccination is not practised. The World Health Organisation estimated whooping cough caused 294,000 deaths in 2002.

Hello Hels, In these days of medical miracles, it is amazing that people would put their children's lives and health at risk of such deadly and hideous diseases for crackpot reasons. Just the fact that smallpox is now rare after inoculation became standard is reason enough to continue it.

This post reminds me of the one you wrote about cochlear implants, and how some people strongly objected to that miracle cure, but the anti-inoculators are even worse, insisting on their right to subject everyone to indescribable illness and danger.
--Jim

Adults are entitled to do whatever they want to their own bodies, including jumping out of small planes without a parachute, facial scarring to look like a cat, drinking absinthe to the point of psychosis etc. So if adults have a reason to avoid inoculations for themselves, I suppose they may do so.

But children under 21 cannot make informed decisions for themselves and to subject them to possible tragedy by smallpox, whooping cough or any other preventable disease is tantamount to child abuse.