Ellis Island New York - a place of welcome or of discrimination?

Ellis Island is a small is­l­and in New York Harbour located in the up­per bay near the New Jer­sey coast. By the time Samuel Ellis became the island's private owner in the 1770s, Ellis Island developed into a harbour fort, ammun­ition and ordinance depot, and finally an immigration station. When the British occupied New York City during the Rev­ol­utionary War (1775–83), its large naval fleet sailed freely into New York Harbour. The Continental Congress voted for independence in 1776.

The Federal government eventually purchased Ellis Island from NY State in 1808. When the government realised its strategic value in defending against British invas­ion, they built a series of coastal fortificat­ions in New York Harbour. This was even before they knew about the War of 1812 between the USA, the UK and their respective allies. But the fort was not needed in the 1812 War and served only as an ammunit­ion storage. They built a parapet for 3 tiers of circular guns, plus two earthworks forts at New York Harbour’s entrance. 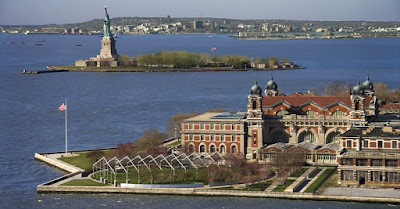 Ellis Island, first used for migrants in 1892.
Statue of Liberty in the background, dedicated in 1886 (above)
Britannica.com

Potential immigrants waiting in the Great Hall, c1900 (below) 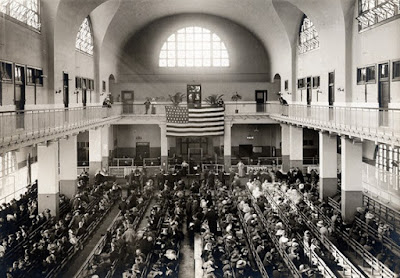 Before 1890, the individual states regulated immigration into the USA. Because New York Harbour was the ultimate destination of steamship companies, most immigrants entered the USA here. Or ports like Boston, Philadelphia, Baltimore, San Francisco, Savannah, Miami and New Orleans.

Clearly Castle Garden was too small to handle the grow­ing numbers of immigrants. And crooked immigration off­icials took bribes in exchange for letting immigrants get off in Manhattan, without first going through inspection at Ellis Island. The Federal govern­ment inter­vened and needed a new Federally-operated station on Ellis Island.

The new structure on Ellis Island opened in Jan 1892 and over the next 6 decades, 12+ million were to follow.

In June 1897, a fire on Ellis Island burned the facilities to the ground. Although no-one died, Federal and State immigrat­ion records since 1855 were utterly destroy­ed. The USA Treasury quickly ordered the immigration facility be rep­laced and all future structures built on Ellis Island had to be fireproof. In Dec 1900, the new Main Building was opened and 2,251 immigrants rushed in. 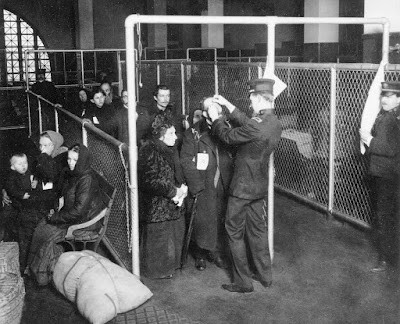 The 1st & 2nd class passengers who arrived in New York Harbour didn’t need to undergo the inspection process at Ellis Island. Instead they under­went a quick inspection aboard ship. If families could afford to pur­ch­ase quality tickets, the Federal government “knew” they would not become a burden to the state. 1st & 2nd class passengers were only sent to Ellis Island for further inspection if they were sick or had legal problems.

However steerage/3rd class immigrants travelled in crowded, unsan­itary conditions near the bottom of steam ships, sea sick in their bunks during rough Atlantic Ocean crossings. Upon arrival in New York City, the steerage passengers were transp­ort­ed from the pier by ferry to Ellis Island, to undergo medical and legal inspections.

Migration was rising at the turn of the century and in 1907 more people (c1.25 million) immigrated to the USA than any other year, including Catholics and Jews from eastern Europe. The largest numbers of Jewish immigrants, c2 million, arrived in 1881-1914! Tradesmen struggled to build new facilities to accommodate this great influx of new immigrants. Hospital buildings, dormitories, contagious disease wards and kitchens all were built as quickly as possible. A kosher kitchen was opened on the Island in 1911. 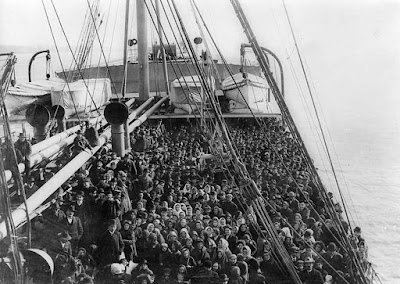 Passengers in steerage, waiting to disembark

As the USA entered WW1, immigration to the USA decreased. In 1918-9, suspected enemy aliens were investigated onboard ship; at the docks they were transferred from Ellis Island so that the USA Navy with the Army Medical Department could control the island complex.

After WW1, a Red Scare spread across America & thousands of suspected alien radicals were interned & later deported. New arrivals faced rejection if they were anarch­ists, had a criminal record or showed poor moral character. So Ellis Island bears a sombre history as a detention centre for thousands of suspected communists and radical immigrants. Yet the overall number of people denied entry at Ellis Island was low; from 1892-1954, only c2% were rejected.

Nasty right-wing politicians demanded greater restrictions on immigration. Yet the Chinese Exclusion Act, the Alien Contract Labour Law and the institution of a literacy test barely stemmed the flood of new immigrants. So the Quota Laws (1921) and the Nation­al Origins Act (1924) were passed. These restrictions were based upon a percentage system according to the number of ethnic groups already living in the USA according to the 1890 & 1910 Censuses. It was an attempt to preserve the ethnic flavour of the old immigrants from North & West Europe, superior to all other races and ethnicities. The doctors who oversaw the medical examinations at Ellis Island led by example - Southern and Eastern Europeans possessed a deteriorating character which made restriction justifiable and necessary. 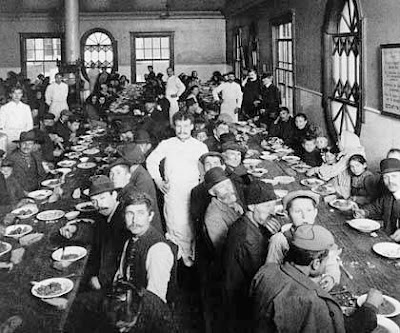 During WW2, enemy merchant seamen and Nazi sympath­isers were detained. And the USA Coast Guard also trained 60,000 servicemen there. But it all ended in Nov 1954 when the last detainee was released, and Ellis Island officially closed to immigrants. Aliens and deportees were moved out in Nov 1954 and the port was closed for good.


Starting in 1984, there was a major historic restoration of Ellis Island. The Main Building was reopened to the public in Sep 1990 as the Immigration Museum.

Imagine being in steerage, with the vomit, filthy clothes, crying babies. The poor souls must have been desperate.

Hello Hels, It seems to me that moving and processing so many millions of people would be a logistical nightmare no matter what. Most of these people were fleeing from unspeakable horrors that made them willing to take the steerage tickets, and Ellis Island itself must have been rather pleasant after the unimaginable conditions in steerage on the ship. Also don't forget that in the days when epidemics were frequent and medicines and preventatives few, disease and contagion were real concerns.
--Jim

We learnt quite a bit of Ellis Island history when we cruised on a tourist ferry on the Hudson, but I never thought to ask why it was called Ellis Island. I now know.

When my parents-in-law came by ship in 1951, they certainly would have been put into bunk beds lined up in a long deck with no privacy and little sanitation. But because they had three children with them, the ship's staff found them a two bed cabin. For people desperate to leave Eastern Europe, they were totally grateful.

agreed... disease was everywhere. But the time to check the passengers' health was _before_ they stepped into the bowels of a ship. The American consulates in Austria, Italy etc did not want to send epidemics into the USA so a medical examination was done before a visa was issued. And the shipping companies did not want thousands of cramped travellers to be spreading diseases inside their steerage decks.

when the main building was reopened to the public in 1990 as the Immigration Museum, I wasn't sure that people would want to go on guided or unguided tours. But good on you!

I went with my aunt and uncle who were "clients" of Ellis Island back in 1952. I loved the tour.. my aunt did not.

In the DP camps, no-one knew which visa would arrive. So we applied for Australia, USA, Canada and Argentina, and took whichever arrived first.
Australia!

Desperation creates strange decision-making, yes. You would have taken visas to any country and you would have travelled by any type of transport.

Well done, as it turned out :)

Hi again, Before I came to Taiwan I had to have a health check in American, then again in Taiwan every time I got my visa renewed. Countries still take all aspects of immigration pretty seriously.

Many places still have mass immigration and relocation; I guess they are up against many of the same problems balancing humanitarian and logistical issues that Ellis Island had. --Jim

History repeats itself. We are having the same mass immigration issues now and we still do not know how to treat legal immigrants in a humane way.

A health check was absolutely necessary before you left The USA but after that it became a little pedantic, I think. A sensible balance between humanitarian and logistical issues is an appropriate way of coming to a successful programme, nod.

History is indeed repeating itself, but we have learned nothing :( Australia is still hauling refugee ships out to sea, even if they are sinking, and we are still locking up refugees behind barbed wire on dry Pacific Islands. Shame!!!!