Can a greedy doctor become a mass murderer? Dr H.H.Holmes in Chicago

In 1861 Herman Webster Mudgett was born to a respected New Hamp­sh­ire family. In childhood he was fascinated with skeletons and soon became obsessed with death. Mudgett changed his name to H.H Holmes and studied medicine at the University of Michigan Medical School.

While a student, Holmes stole cadavers from the labor­at­ory, disfig­ured them and then planted the bodies as if they were killed in accidents. His passion for death had started early in life but his criminal skills began in med­ical school; it was only then he collected on fake insurance policies.

Holmes was a very good medical student. In 1884 he passed his exams easily and in 1885 he moved to Chicago where he worked at a pharmacy as Dr Henry Holmes. When the owner of the business passed away, Holmes convinced the wid­ow to sell him the shop in 1887. Holmes hired the Conner family from Iowa to work in the shop and keep the books, and the widow was never seen again!

Holmes married a few times, often to more than one woman at the same time. Emeline Cigrand became Holmes' personal secretary but after acc­ept­ing Holmes' marriage proposal, Cigrand disappeared. Soon after, Holmes sold an articulated female skeleton to a nearby medical school. Holmes later confessed to locking Cigard in the vault, before raping and murdering her. 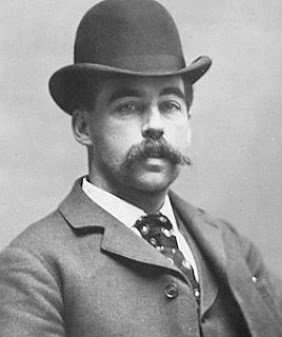 Knowing the World Fair was coming to Chicago, Holmes bought the un­d­eveloped land across the street, and began building his hotel at 63rd and South Wallace Sts Englewood. Construct­ion took two long years because Holmes was constant­ly changing labourers. By keeping turnover high, Holmes easily hid its layout from the world.

On the ground floor of Holmes’ three-storey Murder Castle, thousands of people enter the shops, some operated by Holmes and some leased to local mer­chants. They knew nothing of what was happening above.

The angled, nar­row corr­id­ors had poor light­ing. Most of the rooms were rigged with gas pipes connected to a con­trol panel in Holmes' closet. Stairways that led nowhere were interspersed with locked doors to which only Holmes had the key. And Holmes' personal off­ice contained a walk-in bank vault, leaving the victims to suff­ocate. There were trap doors, secret passage ways, hidden closets with sliding panels, peepholes, door­ways opening to brick walls, sound­proofed bedrooms that were either airtight and lined with asbestos-coated steel plates, false bat­tle­ments and wooden bay windows were covered in sheet iron.

Holmes' medical training paid off. The basement was designed for a good surgeon; it had a dissecting tab­le, surgeon's cabinet, stretching rack and crematory. Sometimes he would send the bodies down the greased chute, dissect them, strip them of the flesh and sell them as skeleton models to medical schools. Or he placed the bodies into pits of quicklime vats or burnt them in the furnaces. Charles Chappell was an artic­ul­ator i.e he could strip flesh from human bodies and reassemble the bones to form complete skeletons. Holmes paid Chappell to art­iculate a cadaver, then to sell the skeleton to a medical school.

When completed in 1891, Holm­es placed ads in news­papers offering hotel jobs for young women and ad­vert­ised the Castle for guests. He also placed ads presenting himself as a wealthy man look­ing for a wife. In May-October 1893 the Chicago World Fair was opened, to cele­brate the 400th anniversary of Columbus’ discovery of America. The event attracted millions of people from all over the world.

All of Holmes’ employees, hotel guests, fiancés and wives were req­uired to have life insurance policies. Holmes paid the premiums, as long as he was the beneficiary. Most of his fiancés, employees and guests suddenly disappeared, leaving Holmes to collect the insurance. 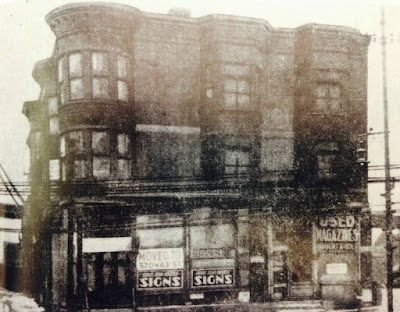 Post-Wor­ld Fair Chicago’s economy slumped; so Holmes abandoned the Castle and focused on insurance scams, meanwhile comm­it­ting random murders. During this time, Holmes stole horses from Texas, shipped them to St Louis and sold them – making a fortune with accomplice Benjamin Pitezel. He was arrested and imprisoned.

While in gaol, he devised an insurance scam with cellmate Marion Hedgepeth. Holmes would take out a valuable insurance policy, fake his own death and provide Hedgepeth with $500 in exch­an­ge for a helpful lawyer. Holmes did try his plan but the in­surance company was suspicious and refused payment. Holmes then attempted a similar plan in Philadelphia, asking Pitezel to fake his own death. But Holmes killed Pitezel and collected the insurance anyhow!

In 1894 Hedgepath told police about Holmes’ scam. The police track­ed Holmes, arresting him in Boston for insur­ance fraud. Almost acc­id­entally, Chicago police investigated Hol­m­es’ Castle where they discovered his tortures and murders. The bodies they found were so badly dismembered and decomposed, the number was unclear.

How did the crisis get so far? Because of the World's Fair and lim­ited police procedure, missing persons had barely been invest­igat­ed. And more difficult still, Holmes' innate charm could smooth over any major worries that neighbours and families were pursuing.

While conducting their investigation in Toronto, police discovered the dead Pitezel children who had gone missing sometime during Holmes’ insurance fraud spree. Linking Holmes to their murd­ers, police arrested him and he then confessed to 28 other murders. Holmes' 6-day trial began in Philadelphia in late 1895. Throughout, he was charismatic to the day of his exec­ut­ion: May 1896. He was 36.

A man named AM Clark purchased the Murder Castle soon after the police investigation. Clark intended to capitalise on the Castle's notoriety and reopen it as a tourist attraction. However in August a watchman saw flames and explosions from the bedroom windows and the roof had collapsed. Only the first floor was salvaged and served as a bookshop until the Castle was sold in 1937. It was then pulled down.

In the next post I will examine a similar mass murderer (in Britain), and draw some conclusions.

Re your initial question - NO! Only the best and most moral people go into Medicine. Also we medicos study Ethics at University.

cute :) Actually I might ask you, why did a mass murderer like Dr HH Holmes choose Medicine, of all the faculties in which he might have studied? If he was already planning a life of killing and hiding bodies, he really did need an excellent working knowledge of drugs, surgery and pathology.

Hello Hels, I have read of Holmes' story before with amazement. How can people get away with so much? Even with millions going to the fair, the police would be concerned with the disappearance of so many, and if they were going to a fancy new place like the Castle, they probably let people know. Likewise, how could the insurance company keep making payouts to the same person without getting suspicious?

I have an idea that Australian Doctor was being ironic--after all, ethics are studied even in business schools! Most people, regardless of degrees, should not be trusted farther than you can throw them.
--Jim
p.s. I think I know your British doctor--I won't give it away, but did he specialize in the elderly?

The British mass murderer was a professional butcher, not a doctor. But the issues are very similar.

It seems very odd that he could get away with so many atrocities. The history of incompetence by law enforcement is long everywhere in the world and we see it daily still.

Is Australian Doctor, Joe? Ok, maybe he is not a doctor, but perhaps it is someone you know.

Joe is indeed a doctor who has coffee with his old medical mates. The response came from a specific man, but he may well have represented a collective view :)

The incompetence by law enforcement will be very visible in both these cases, as you say. But there is something else as well. Something about victims' reluctance to tell what happened to them - clearly they feared what might happen to them, if they dobbed the mass murderers in to the police.

Hi Hels. After reading your final sentence I changed my mind about what I am about to say. Then I read Jim's similar response and your further reply. So:
Dr Harold Shipman was a much-loved British GP convicted of the murder of 15 of his patients and suspected in a further 250 cases!. No motive was ever learned before his 2004 suicide.
I wonder if Holmes took his new name from Sherlock?
CLICK HERE for Bazza’s floccinaucinihilipilificatious Blog ‘To Discover Ice’

Herman Mudgett changed his name to HHHolmes in 1885 or 1886, years before the first Sherlock Holmes story appeared in 1892. So we know that was not the source of Holmes name, but I cannot find the right answer. Yet!

Dr Shipman was never motivated by greed, unlike the very greedy Dr Holmes. Except for just one family where Shipman DID have his name put into one of his elderly patient's will as the main beneficiary (oops), Shipman only wanted to save his patients suffering from pain and frailty in old age. I would call it euthanasia but he didn't bother getting the permission of the patients themselves. Shipman just KNEW what was right for each elderly and much loved woman patient.

this is a plain case of a very clever psychopath with rather weird fascinations . What I find very interesting is that his interest started SOOOOO young . Makes you feel pretty sure that his brain was rather different to the norm . It would be so interesting to know something of his family tree . I am always fascinated by why people behave like this . The urge to do these evil things must be overwhelming as they surely must realize that they will be caught at some point or maybe there is no fear along with a complete lack of empathy

normally we think of criminals as unmarried, under-educated, drinking men who are barely employed in unskilled labouring jobs. But here we have a clever, well educated professional, handsome, multiply married and charismatic. So how can we explain why the hotel rooms and the basement were totally dedicated to tricking dozens of innocent people into his world, raping, torturing and murdering them, then cashing in on insurance money from their disappearance.

I am also fascinated by evil, repetitive behaviour, even though I don't pretend to understand Holmes in the slightest.