The first Jewish settler in New Zealand was Joel Samuel Polack in 1831. Born in London to Dutch parents, he established a successful retail business and later branched out into shipping, mainly to Cal­ifornia. When New Zealand became a British colony in 1840, it was the perfect time for the Auckland Jewish community’s found­at­ion; they soon acquired land for their first cemetery.

The first Hebrew congregation began worship in Auckland in 1843. Their first formal place of worship was in Nathan & Joseph's Ware­house in Shortland Street. By 1853 the congregation had grown to 100 and worship was held in a small building in Emily Place. By the 1860s this building had become too small for the rapidly increasing population and moneys were collected to build a new synagogue.

In 1884, the Jewish Community purchased a section on the corner of Princes and Bowen Sts. At that time the site was occupied by the former Albert Barracks Guard House, which overlooked a vegetable garden used by soldiers.

The community asked architects to submit synagogue designs and they chose Edward Bartley to take on the project. Bartley was an Irish carpenter and joiner arrived in New Zealand in 1854 and trained as an architect and builder. In 1872, he went into partnership with another builder, forming Matthews & Bartley Builders. He moved to the North Shore in 1872, later building his own home in Devonport. Other significant Bartley buildings included the Foundation for the Blind Jubilee Building and the original Wellesley St Opera House. And was a founding member of the New Zealand Institute of Architects. 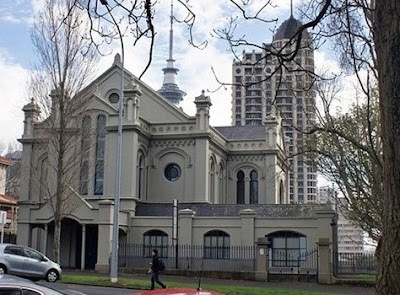 Princes St Synagogue in Auckland
built by Edward Bartley by 1885

The Princes St Synagogue structure was designed in a mixed Roman­esque and Gothic style, the project influenced by an important Glasgow Syn­agogue. It was built to seat a congregation of 375. As one of NZ’s oldest massed concrete buildings, the basement was set aside for childcare, wedding and barmitzvahs, and a school annexe was later added.

The interior ornamentation was by the decorator JL Holland. The int­erior of the building featured a barrel vaulted timber ceiling and an ornate circular ark, covered by a stained glass dome im­port­ed from Australia. The blend of Arabic and Classical styles feat­uring ornate stained-glass windows; an ell­iptical stair­case; a decorated barrel-vaulted, wood-panelled ceil­ing supp­orted by graceful Arabic arches and columns; and ornate plaster work.

During his long career Bartley served as architect to the Anglican Church, the Auckland Savings Bank and the Auckland Hospital & Charitable Aid Board. The Mount Eden Public Library designed by the firm Bartley and Wade was prob­ably his last building. For the 1913 Auckland Exhibition he was a member of the Building Committee which selected the designs and oversaw the construction of the exhibition buildings in the Auckland Domain. 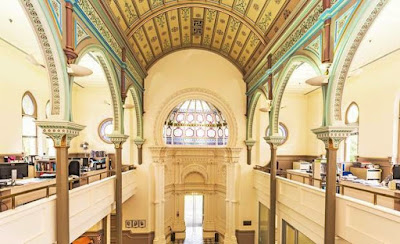 The barrel-vaulted, wood-panelled ceil­ing with graceful Arabic arches and columns are still intact. The women's pews upstairs were removed and the bank office spaces remain.

The synagogue had been Auck­land’s main synag­ogue until 1967. Only then, due to substantial growth in the Jewish Community, did the congregation move to a lar­g­er, newly synagogue opposite Myers Park.

After the original building was de-cons­ec­rated in 1969, ownership reverted to Auckland City Council. The building was left vacant and slowly deteriorated over 20+ years, until it was renovated to oper­ate a branch of the National Bank in 1989. The interior of the form­­er syn­agogue was meticulously restored to its original condit­ion in the late 1980s, with extensive structural and streng­thening work of the interior office spaces.

The University of Auckland has leased the old synagogue since 2003, using the building as home to the University’s Alumni Relations and Develop­ment office. It is located at the campus entrance.

The former synagogue is registered by the New Zealand Historic Places Trust and has Historic Place Category 1 Status. The conservation project won the inaugural Auckland City Heritage Aw­ard. And they won a New Zealand Institute of Arch­itects National Award citation in 1990 for successfully reconciling the tenant’s commercial requirements with the need to conserve one of Auckland’s significant buildings. 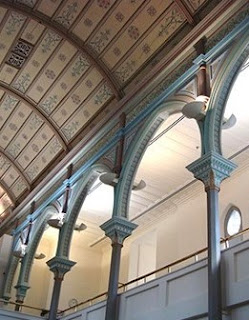 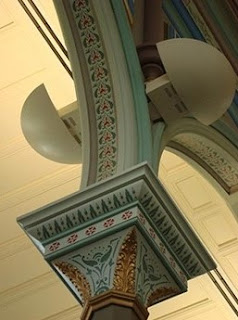 Decoration and lamps on the arches and columns

This important part of Auckland’s cultural history is for sale. The synagogue is the only landmark historic building of its type in the city and one of only two extant C19th synagogues in all the country. It had acted as Auckland’s main synagogue and focal point for the Jewish community from 1885 until 1968! The ad­joining building, the Trish Clark Gallery for contemporary art that was built in 1986, is one of Auckland’s leading art spaces. Along with the old synagogue, the whole complex is for sale in Apr 2018.


You might like to read The History of the Jews in New Zealand (1958) by Lazarus Mor­ris Goldman for an excellent and detailed analysis of Jewish settlers in C19th New Zealand.

It is a wonderful building. It is hard to imagine how it could have operated as a bank. I think it is a bit of a shame that it is not used for its original purpose, but numbers are numbers and if it was too small, then that is that.

Hello Hels, It is quite a handsome as well as historic building, and I hope that it finds an appropriate owner. I am guessing that there are many restrictions on how the new owner can use and especially alter or remodel the edifice.

In Cleveland, many of the older churches and temples were sold when their congregations left for the newer, smarter suburbs. Sometimes newer but poorer religious groups moved in who could not afford to maintain the elaborate older buildings, with the result that many went into poor repair, and many also came down, a great loss for the city.
--Jim

When my aunt and uncle were living in Auckland, we often visited the old shule. I thought the concrete might have been a bit bunker like, but it was an impressive building and the community was very welcoming.

nod... communities move to new suburbs and leave their old facilities behind. My parents grew up and lived in Carlton where they had four synagogues, 3 kosher cake shops and 4 butchers, yiddish and hebrew schools, tennis courts and two kindergartens. By the 1960s, all these families moved to south of the Yarra, to build a dozen primary and high schools, 42 synagogues, 6 butcher shops, 25 coffee and cake shops etc etc.

But Carlton today has no Jewish facility whatsoever. But it is chockablock full with Italian, Russian and other community facilities.

As you indicated, many of the older churches and temples in Cleveland were sold when their congregations moved out to more spacious suburbs. The problem is that precious 19th century buildings are already very rare, so neglect (either intentional or accidental) destroys the city's architectural history.

I wonder how the heritage people are fighting community boredom with the issue.

Like the former Congregational church (1876), the synagogue in Princes St (1884) was built from mass concrete, using Roche lime produced locally near Warkworth. The mass concrete was then rendered internally and externally, a common finish for concrete buildings at the time, so I assuming costs were a relevant factor. In any case the synagogue is still in excellent condition, so concrete was a good decision as seen in "Historic Concrete Structures in New Zealand".

Pardon my ignorance but didn't larger barrel-vault ceilings require either flying buttresses or some similar support? The building certainly looks impressive and must have been locally admired. I can't say there is a recognisable style of synagogue architecture that I have ever noticed.
Funnily enough, I was at a Bar Mitzvah yesterday in Chigwell & Hainault Synagogue (I'm not a regular shul goer) and a chap was telling me that the average life of a shul is about fifty years because the community tends to move up and out. This may not be the case in younger countries of course but there are many local (London) examples I can think of.
CLICK HERE for Bazza’s abounding Blog ‘To Discover Ice’

50 years covers two generations of community and family life which sounds about right to me. As long as you leave an interim period while grandchildren are examining their grandparents' lifestyle and then slowly opt for something new.

It will come as no shock that heritage buildings must be preserved intact and at a hefty price. A Grade II* Listed early C19th terrace house in Well Walk Hampstead was the former home of artist John Constable from 1827-37. Now for sale, the house remains widely untouched and is full of character, high ceilings and original period features. The guide price is £4,000,000 ($7,200,200).