Can a lonely butcher become a mass murderer? Dennis Nilsen in North London

Dennis Andrew Nilsen (b1945) was born in Aberdeenshire. His father was an alcoholic and his parents divorced early, so Dennis was sent to his adored grand­parents. Sadly when grandpa died, the traumat­ised 6 years-old was shown his grandfather lying in his coffin.

The lad joined the army in 1961 at 15. His first three years in the army were spent undergoing training at the Aldershot Barr­acks. This was a very happy time for Nilsen who thrived on the hard work, dis­cip­line and comradeship of army life. He was no longer an outsider.

Nilsen's chosen army trade was in the catering corps - he trained as a butcher in Aden, Cyprus and Berlin. When Nilsen reached the rank of Corporal, his successful army career had lasted 11.5 years, but he disliked the Army's role in Northern Ireland and left.

In Dec 1972, he enrolled in the Metropolitan Police, hoping to recapture army-type comradeship. He was fas­cin­ated seeing autopsied bodies in a morgue. But he wasn’t happy and resigned in Dec 1973.

From the mid 1970s, Nilsen worked in a job centre. He met a man there who was looking for a job. They went to Nil­sen's flat but David Painter saved himself and rushed to hosp­it­al. NB Nil­sen was questioned by the police and released!

The killings re-started a year after Gallichan left. As 1978 ended, Nil­sen sank into a deep depression, until the old death fantasy came back out to comfort him. By New Year he went to a pub and returned home with an unknown teenager. The men drank themselves into a blear, and when Nilsen awoke, he wanted to keep this lad as a companion forever. So he strang­l­ed the youth with his neck­tie, drowned him and placed him under the floorboards.

In Oct 1979, a year after the first murder, another young stud­ent went home with Nilsen. Andrew Ho informed the police, but no charges were brought!!

All his partners were young men whom he picked up in bars and brought home for sex or for company. Nilsen strangled and drowned his victims during the night, then carefully used his butchering skills to help him dispose of the bodies. Nilsen had access to a large garden and was able to burn many of the remains in a bonfire.

Later on, the police inspected Nilsen's home at 195 at Melrose Avenue and found another 13 bodies. 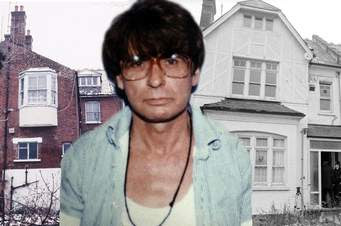 23 Cranley Gardens in Muswell Hill, North London. The new house at Cran­ley Gardens had been divided into 6 flats and an attic for Nilsen. He’d lost the use of a garden and even of a space under floor boards, so he was certain this would be a deterrent for his comp­ulsive homicides. Wrong!

Nilsen met a student in a Soho bar and invited him home. The stud­ent awoke the next morning not remembering the previous evening, but knew enough to see a doctor because of neck bruising. The doct­or said the student had been strangled and advised him to go to the police. Alas the student would not.

Rather than being appalled by the sight of corpses, Nilsen thought them quite beautiful. He did not really know why he had killed any young men - he just wanted them to stay. Sometimes he decided to have sex with the corpses. Or he would make dinner and watch telev­ision with a corpse propped upright on the couch.

In just 1.5 years, Nilsen had killed twelve unemployed or homeless young men in Muswell Hill, largely unidentifiable. As his murders contin­ued in the attic, Nilsen had to dispose of the human rem­ains in suitcases; they were full of human org­ans stored in his ward­robe. Neighbours gagged at the smell. When he tried to dispose of the bodies by flushing them down the toilet, the sew­er­age clogged up. In 1983 the drain ins­p­ect­or imm­ediately called the pol­ice who discovered the bones were human.

Despite being cautioned, Nilsen unburdened himself in nauseating detail. And he also accompanied police back to 195 Melrose Avenue and pointed out where he had buried body parts and made bonfires.

At the 1983 trial at Old Bailey, Nilsen’s in­terviews with the pol­ice were read verbatim, taking four hours, and surv­iving vic­tims gave chilling evidence. Because this profess­ion­al butcher knew how to cut up a body well and boil flesh off the heads in a large pot, they present­ed his pot, dissecting board and butch­ering knives in court. Finally Dennis Nilsen was convicted of 6 murders and 2 attempted murders, sentenced to life in prison, never to be released. Read Killing for Company 1985, by Nilsen’s friend Brian Masters.

Conclusion Different decades, countries, preferred victims, motives and killing methods. Yet the outcome was equally tragic for hundreds of people in the USA and Britain.

The police were rarely told of Dr Holmes’ killings for financial windfalls and few missing person’s reports were filed. Yet Holm­es openly placed ads in news­papers offering jobs for young women, hotel rooms for guests and positions for potential wives. Did the parents do nothing when their daughters didn’t come home? And from the early insurance claims, the insurance companies must have und­er­stood what was happening. It was unthinkable that the insur­ance companies could make endless payouts to one person!

Of the victims who manag­ed to escape lonely Nilsen’s grasp, many had made hospital records and police reports, so the police knew that they had been given solid evidence over four years. If only the various hospitals and police stations had been able to coord­inate with each other, a more urgent & proactive police investigation may have saved many lives. If only the neighbours, workmates, sexual partners and parents had not averted their eyes and noses, even when they knew (or suspected) that the army butcher was psychotic.

A our local well known radio broadcaster says, when it is a choice between bad intention or incompetence, the latter is usually the case. I've read about John Wayne Gacy in the US but not of this Nilsen. One can't help but draw a conclusion in both cases that some lives are worth more that others.

Mmmm... you're wandering into some dark spaces Hels.
It does beg the question though, as to whether we are all really equal, this sort of abhorrence knowing no borders. Human behaviour? Don't think so.

Maybe some stories of reincarnation provide an answer? ie something going wrong, a sysematic fault where there's a disconnect, the human coming back as an animal - like a Stalin, Pol Pot or Hitler.
Oh well, it's a thought... but I reckon animals are better than that.

Gacy (1942-94) is a very apt comparison. His father was physically brutal and emotional destructive; young Gacy's first experience with corpses in a mortuary was very satisfying; he was a hard working employee and a hard working member of a charity-community organisation, married and had children.

So what went so badly wrong? From 1968-1978 he was charged with sexual assault, sodomy and rape many times, gaoled often and paroled. The 33 murders didn't start until 1972.

When they got to court in 1980, the big question was if he was insane or not. He was found guilty, and later executed.

That is so true!! I would much rather be talking about the relationships between cousins British King George V, Tsar Nicholas II of Russia and Kaiser Wilhelm II of Germany, or the architecture and patronage of Frick. Deranged mass murderers who watch tv with their dead victims is way out of my league normally.

Now I look back on Dr Holmes, Dennis Nilsen and even Gacy, I am thinking more about a) the capacity of psychotic individuals to make decisions, b) the community's responsibility to prevent even more mass murders and c)the inappropriateness of capital punishment.

Hello Hels, It is amazing how mass murderers can get away with it for so long. True, they often pick as victims the disenfranchised of society, who will not go to the police or be taken seriously if they do. However, one facet I cannot get over is the stench. How can people live for years or even days with a nauseating smell coming from next door? Also, you would think that if people entered a strange house with a terrible odor, their one desire would be to get out as quickly as possible, and not listen to excuses about drains and sausage factories (for the latter, see the horrifying story of the 'Cleveland Strangler', Anthony Sowell!).
--Jim

Helen I believe you said that you lived in North London in the 1970s. I remember it being a safe place where families were proud of their homes and gardens.

Selecting peripheral members of society was very clever, even if the murder did not know in advance whether a particular victim would be raped, murdered or let go. Partially for the reason you stated - such people would not have gone to the police because they were more afraid of the police than they were of rape. Being gay, for example, would have landed the _victim_ in gaol in Britain back then :(

But there was another clever consideration. Murderers relied that their target transients were well removed from stable living arrangements. Who would report an ex-army lad, who left camp and had no home of his own, as missing? Or a fall-down drunk who hadn't seen his parents for 5 years.

Quite right. Spouse and I lived in Mill Hill in the early 1970s, perhaps 8 ks away from Muswell Hill. Our flat was small but the street looked lovely and I would NEVER have thought that murderers and rapists lurked, burying bodies in gorgeous garden spaces.

oh dear Hels I was hoping for something to tickle my neurons and lift my spirits :(

you are quite right! You will love the next post - music, dance, colour etc.

Just reading this made me shiver.

I'm not so certain that it's about some members of society being worth less than others so much as police incompetence. It seems to be endemic throughout society that people going to the police are ignored. How often do we hear that said!
CLICK HERE for Bazza’s mostly harmless Blog ‘To Discover Ice’

there are two particularly chilling pieces of evidence.
a] "The killings re-started a year after Gallichan left. As 1978 ended, Nil­sen sank into a deep depression, until the old death fantasy came back out to comfort him." And b] Rather than being appalled by the sight of corpses, Nilsen thought them quite beautiful. He did not really know why he had killed any young men - he just wanted them to stay. Sometimes he decided to have sex with the corpses.

So Nilsen was so depressed, psychotic and desperately lonely, nothing was going to stop the murders, including his own disgust. And certainly not his own will power.

I agree totally. Dennis Nilsen (and other such murderers) targeted sex workers and gay men because the victims' deaths were more likely to go unreported to the police or not taken seriously by the police, even if the cases were reported.

But there was another thing, back then. Institutional homophobia and brutal laws gaoling gays meant that many men would NEVER go into a police station voluntarily.