The true story of Pocahontas - in Virginia and in England

English King James I granted a charter to the Virginia Co. to form a North America settlement in 1606. The Virginia Co. was to search for local riches and a sea trade route to the Pac­ific Ocean. 100 colonists left England on three ships and landed on a narrow peninsula in the James River. Cap­tain John Smith chose the inland location to hide them from Spanish ships and to pro­vide protection from any Native American enemies.

John Smith and the English colonists stayed near the Powhatan on nearby Jamestown Island, but later began to explore out-lying areas.

In the meantime Smith terrorised Native people when he put guns to heads of village chiefs, demanding food and supplies. In fact the early 1600s were a horrible time for all local tribes. Young children were targets of rape, so the Native women offered themselves to men, to keep their children safe. The Powhatan people were in an unwinnable situation since the English government offered them no protection.

The true story of  Matoaka (later Pocahontas c1596-1616) has been gathered from years of extensive research of the written records and oral histories from her descendants and tribal peoples of Virginia. Read Vincent Schilling  who tells a tale of tragedy and heart­break about a young Native girl Matoaka who was kidnapped, raped and perhaps murdered by those who were supposed to keep her safe.

Matoaka’s mother was Pocahontas (who died giving birth) and her father was Wahunsenaca, the tribal chief. Little Matoaka was raised by the Mat­tap­oni women, along with her many sib­lings.

Matoaka was c10 when John Smith and English col­on­ists arrived. Since Pocahontas was liv­ing with her father Chief Powhatan Wahunsenaca, she seemed to be protected. In wint­er 1607, the colonists and Smith met with Powhatan warriors and Smith was captured by the chief’s younger broth­er. Later Wahunsenaca grew to like Smith, offering him the position of werowance/colonists’ leader, plus land with great access to game and seafood. 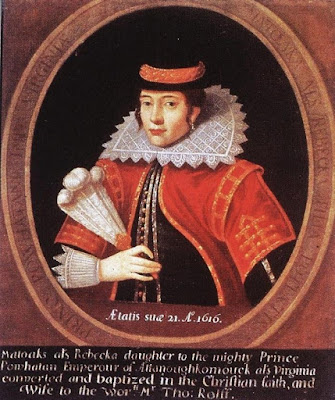 "English" Pocahontas' portrait, 1616
She was in rich red and gold, with white lace cuffs and high collar, pearl earring, and an ostrich feather fan.

Years later, Smith alleged that Pocahontas saved his life in the four-day process of becoming a werowance. But children were not allowed to attend any sort of religious rituals, so she could not have thrown herself in front of John Smith to beg for his life. [In 1624 Smith pub­lish­ed his book General Historie of Virginia where he claimed Pocahontas had twice saved his life, but Vincent Schilling said it wasn’t true].

In 1608-09, Smith’s role as the colonists’ wero­w­ance had failed. The colonists made inadeq­uate attempts to plant crops to harvest, and Smith violently demanded supplies from surrounding vil­lages. Pocahontas’ father was disgusted.

When Matoaka turned 14, she choose a new name after her moth­er, Pocahontas. During a ceremony she danced a courtship dance with Kocoum, younger brother of Potowomac Chief Japazaw. She married the young warrior and soon became preg­nant. It was at this time rumours surfaced that colonists planned to kidnap Pocahontas.

An English colonist Captain Samuel Argall was particularly keen to find her, thinking that a captured daughter of the chief would prevent Native attacks. Argall came to the village and demanded Chief Japazaw, Pocahontas’ brother-in-law, to give up Pocahontas or suffer violence against his village. So he relented in the ridiculous hope that she would only be gone temporar­ily. Before Argall left the village, he gave Chief Japazaw a copper pot as a “trade” for her.

Pocahontas had to give her baby, Kocoum, to the women of the village. She was trapped onboard an Eng­lish ship and her husband was killed by the colonists. The tribal chiefs of the Powhatan never retaliated for the kidnapping of Pocahontas, fearing they would suffer!

By the time John Rolfe arrived in Virginia in May 1610, 600 colon­ists had been reduced to 70 by famine, disease and clashes. Mat­taponi history is clear that Pocahontas and Rolfe had a son out of wedlock, Thomas. Event­ually Pocahontas was converted to Christianity and took the name Rebecca.

During her captivity, the English colony of Jamestown was fail­ing. John Rolfe was under a 1616 deadline to become profitable or lose financial support from home. Rolfe sought to learn tobacco-curing techniques from the Powhatan, but curing tobacco was a sacred Native practice. Realising the value of aligning himself with the tribe, he eventually married Pocahontas.

Only then did the Powhatan spiritual leaders and family share the curing practice with Rolfe. And soon Rolfe’s tobacco was a sensation; he saved the colony of Jamestown!

The Powhatan tribal lands were now highly sought after for the tobacco trade and the tribe suffered badly of greedy tobacco farmers. Rumours of the colonists’ desire to take Pocahontas made its way to the Powhatan, who feared for her well-being. They thought of rescuing her, but once again Wahunsenaca did nothing because he feared his daughter might “be harmed”.

Rebecca Pocahontas Rolfe travelled to England in 1616 with John Rolfe, son Thomas Rolfe, John Argall and some Native tribal members. The bringing of Pocahontas to Eng­land was to show friendship with Native nations; it was a key to continued financial support for the struggling colonists.

According to Mattachanna’s record, Pocahontas realised that she was being used and desperately desired to return home. According to Jane Dismore, Pocahontas carried herself with great dignity. The Bishop wrote he ‘accustomed her selfe to civilitie’ and ‘still car­r­ied her selfe as the Daughter of a King, and was accordingly respected [by] persons of Honor, in their hopefull zeale by her to advance Christianitie’. Clearly she was very popular in King James’ court, and did not want to go home.

Plans were made to return to Virginia in 1617 when Pocahontas was in good health. Yet at only 20 she died (of TB?) in March 1617 and was buried in St George’s Church Gravesend.

No parents, two husbands, two sons and dead by 20 :( Tragic.

Hello Hels, Pocahontas is unique in that we have so much information about her life. It is a shame that she was made a pawn in the politics of her situation. Considering that it is difficult to establish even one fact from centuries ago, and adding researcher bias, it is possible that Pocahontas the victim is as uncertain as Pocahontas the heroine. It is a shame that she died at such a young and critical moment in her "multicultural" life--I'm sure that she would have had a major impact on Colonial developments and perceptions.
--Jim

Helen, why do you think Pocahontas was so famous, apart from Disney that is.

Interesting - a brutal and tragic tale. I wonder what happened to her son, Thomas.

The popular image of Pocahontas is a romantic one. When I have told people that she is buried at Gravesend they often don't believe it!
Her story is truly tragic and your background details makes it even more desperate.
CLICK HERE for Bazza’s risible Blog ‘To Discover Ice’

When her mother died giving birth to Pocahontas, you know that the young girl's life was not going to be easy. But when the tribal chiefs of the Powhatan failed to protect the young teenager even once, you know her story was going to end in tragedy. To me the saddest part was the murder of her first husband (Kocoum), and the loss of her first son (also Kocoum), when she was only 14 !!

Agreed. It is difficult for us to verify any "facts" from this distance, but how much more so when the history was (largely) written by the victors. Although royal, church and military chronicles include mistakes, intentional or otherwise, the histories of women, colonised people, non-whites, the working class, non-Christians are likely to be even more untrustworthy. And how much more problematic is it for bloggers when we are totally dependent on secondary sources?

I think the best a blogger can do is read widely on a particular historical event/person and try to explore a more complete range of possibilities.

I can only think of two reasons. In his writing Captain John Smith said the very young Pocahontas saved him from her father the tribal chief, twice. Secondly her successful mediation between the Powhatan Indians and the English improved relations and modified English imperial propaganda.

another tricky history to pursue. As far as I can tell, when Pocahontas died and John Rolfe went back to Virginia in 1617, young Thomas Rolfe was left in the care of his paternal uncle in London. In 1646 Lieutenant Thomas Rolfe was granted Fort Chickahominy and 600 acres adjoining on condition of keeping a guard there. Between that date and 1663 he patented a number of other tracts of land, married and had a child.

You should take interested people to Gravesend to see Pocahontas’ final resting place. Stained glass windows were donated to St George's Church in 1914 by the Society of Colonial Dames of America. And more recently a group from Virginia presented the town with a bronze statue of the princess, which was placed in St George’s Church cemetery in 2010.

It is a very sad story and I wonder what the colonists thought at the time. Did they think it was wrong but did nothing? As you would agree, it is very bad to avert your eyes when a terrible wrong is being done.

I think the English did not plan to steal, rape and kill. But they wanted the Virginian land, animals and tobacco curing skills. Of course the Powhatans wanted their own land and industries. So even when Wahunsenaca offered Smith a position of leadership and good land, it was too little, too late.

Colonisers with any human sensitivity had to avert their eyes in every place they took over, including British India, Belgian Congo and French Haiti.