Some history
Acre/Akko was conquered by Pharaoh Ramses II (1279-1213 BC), then by the Greeks, the Persians and the Syrian Sel­eucids. Herod the Great and Roman Emperor Vespasian (69-79 AD) used Akko and Caesarea for their campaign. The town pros­pered in Byzantine times and Om­mayad times, when it was the port for their capital in Damascus.

The Crusaders conquered Jerusalem in 1099 and Akko in 1104. They renamed it St Jean d'Acre and made it the head quarters of the Knights of St John. The Italian port cities est­ablished trading posts in Acre, and made it a flourishing port. After Jerusalem fell in 1187, Acre became the large capital of the Crusader kingdom. In 1219 St Fran­cis of Assisi visited the town and estab­lish­ed a nun­nery. In 1228 Emperor Freder­ick II landed here during his Crus­ade, as did Louis IX of France in 1250. Soon afterwards there was a bitter civ­il war, between the two Christian orders, The Knights Hospital­l­ers of St John and The Templars. In 1290, the Crusaders slaught­ered large num­bers of Muslims. When the Mameluke Sultan arrived in 1291, the Crusader kingdom ended. 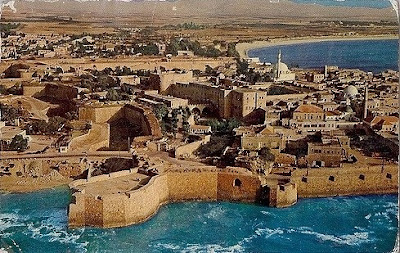 Fortified walls around the Old City 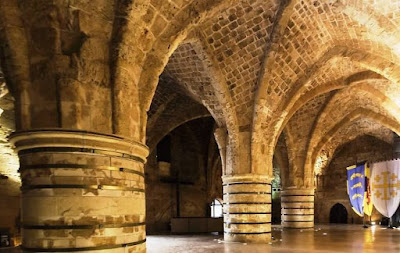 Akko was not rebuilt until the Druze emirs took over in 1750. It was enlar­g­ed by the Bosnian Pasha  Ahmed el-Jazzar who ruled 1775-1805. In 1799 he withstood a siege of the town by Nap­oleon, with Brit­ish help. From 1833-40 Akko was held by Ib­ra­him Pasha who defeated the Turks with Egyptian forces but was compelled by the European powers to withdraw. In the lat­er C19th, Akko lost its importance as a port to Beirut and then Haifa. Brit­ish forces captured the town from the Turks in 1918 and used the citadel as a prison. Finally the town was saved by Israeli troops in May 1948.

Visit the City
With its carav­an­serais, fortific­at­ions and Crusader buildings packed in the narrow alleyways, history-lovers will be very happy. Akko's incredible surviving walls around the Old City are the town's most distinctive fortifications. They were built in their present form by Ahmed el-Jazzar in the C18th. Climb up onto the ramparts and walk along the walls. The northeast corner is domin­ated by the massive tower that stands on the foundations of Richard the Lionheart’s tower. Further south is the Treasures in the Wall Museum, which has a coll­ect­ion of artefacts from C19th Jewish set­tlers in the area. Along the sea-side wall, inspect the Otto­man Tower of the Vine, built to defend against sea attacks.

Akko harbour was an important port from the class­ic­al age until the medieval period. During the Crusader era, it could be occup­ied by up to 80 ships. That port has now silted up, and all that is left is a small tranquil fishing harbour. From here the tour­ist boats sail out to give excellent views of Akko Old City. 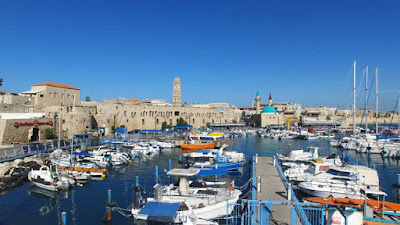 Fishing and tourist boats in the Marina

See the late C12th Hospitallers and Templars Fortress where vis­itors can wander through the strong stone rooms with vaulted ceilings. See the spectacular dining hall, dormitories and an­cient latrines. In the large courtyard, note the stab­l­es, the well and the etched crusaders’ tombs.

In the underground Crusader Tunnel, the sea above is audible. The 350m passage or­ig­inally con­n­ected the harbour with a Templar pal­ace, prov­id­ing a secret esc­ape route to the sea during attacks. 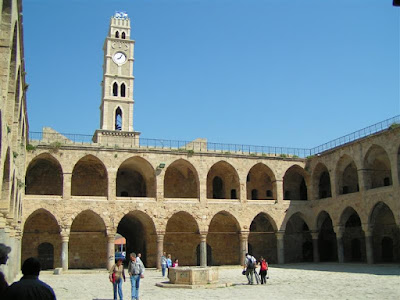 
Khan al-Umdan/of the Columns was named because of the granite and porphyry columns which Ahmed el-Jazzar brought from Caesarea. Built on the site of the Crus­ader's Dominican monast­ery, the khan provided travelling merch­ants with housing while trading in the city. Set around a large rectangular court­yard, the ground floor rooms were used for stor­age and stables, with the sleeping quarters upstairs. Over the north entrance is the clock tower commemor­at­ing a 1906 Sultan.

On the Crusader cathedral site, Ahmed el-Jazzar Mos­que was built in 1781. The mosque has its tall slender minaret, a fine example of Turkish rococo archit­ec­ture with a mam­moth interior decorated in ornate blue, brown and white. A small plain domed building to the right of the prayer hall en­t­rance which had the mausoleum of Ahmed el-Jazzar (d1804) and of his successor Sulieman Pasha. The arcaded courtyard has a small rococo-style kiosk and accommodat­ion spaces for pil­g­rims and Isl­amic schol­ars. On the east side of the gall­ery, a cistern dating from the Crus­ad­er era ran a water supply for the populat­ion, whenever the town was under siege.

Akko's finest church, St John's Church, was built in 1737 and occupies the site of a C12th Crusader chur­ch ded­icated to St Andrew. Note the juxtaposition of its white walls and red bell tower surrounded by the crumbling stone walls.

An C18th hammam/Turkish Bath now houses the Hammam al-Pasha Mus­eum with exhibits on the history and culture of Turkish baths. This preserved hammam has colourful til­es walls encl­os­ing the space where important men bathed and women held parties in a separate enclosure.

Underneath Ahmed el-Jazzar's citadel is a series of gothic vault­ed halls, which were once head-quarters for the Crus­ader armies. See their Knights Hall and the Dining Hall, a series of nar­row subterranean tun­nels and a crypt. The grand bulk of Ahmed el-Jazzar's C18th cit­adel sits just inside the Old City walls. 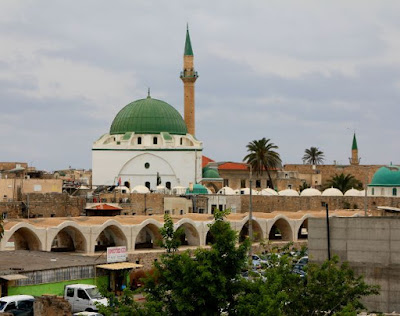 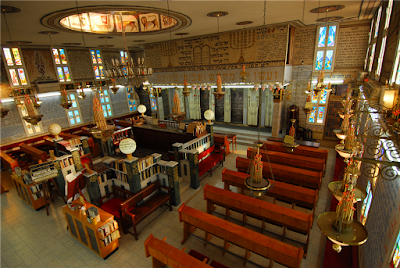 Tunisian Synagogue
covered with mosaics, inside and out

Akko’s Old Town Souk/market place is in the centre of the Old City and is a vibrant bazaar full of fruit, spic­es, tex­t­iles and souvenirs. Eat the Arab pastries in the bakeries!

During the British Mandate, the Citadel was used as a pris­on; today it houses the Museum of Underground Prisoners. This museum commemorates the Jewish fighters who were imprisoned or executed here by the British authorities.

Lohamei Hageta'ot Kibbutz was founded in 1949 by Polish and Lith­uanian Jews. Now is home to a moving mus­eum dedicated to the Jew­ish resistance against the Nazis and the Holocaust. On the ground floor are disp­l­ays illustrating the history of Jewish Vilnius un­t­il 1940. There is material on the early days of Jewish nat­ional­ism at the end of the C19th, the everyday life of Polish Jews and an exhibit of art works by concent­rat­ion camp prisoners.

Just north of Akko, the lovely gardens of Bahje Baha'i Centre contain the shrine of Bahu Ullah, founder of Baha'i faith. He was exiled to Akko in 1868 and spent the later life in the red-roofed house in the gardens. Just like the Baha'i Gardens in Haifa.

I would add the Tunisian Synagogue, a great building.

I love to see these ancient cities with their layers of civilization. Too bad that so many layers had to be the results of wars and massacres.
--Jim

I have added a photo, but it doesn't seem to reflect the full and detailed beauty of the mosaics, stained glass windows and special floors of The Tunisian Synagogue in Akko. Is there any other synagogue that has three entrances (to represent the Patriarchs) and seven arks (to symbolise the Seven Gates of Heaven)?

I remember seeing that Tower of London (built around 1078 AD) as a teenager and thinking that was probably the oldest standing building in the world. Of course that is funny now, but it goes to show that not many people in the New World think about ancient cities with their layers of civilisation.

I have a step-brother who lives in Haifa but I have never been to Acre/Akko. Next time! A fascinating read from a mystery guest poster. I have always found the Baha'i faith interesting; it seems too good to be true and, naturally, led to executions and prejudice - welcome to the human race.
CLICK HERE for Bazza’s different-from-the-norm Blog ‘To Discover Ice’

written by a travel agency in my family that focuses on Egypt, Israel and Jordan :) Joe and the boys just spent three weeks on a walking tour and loved Acre in particular.

I was there years ago and thought the hammam and the caravanserai were very special, but the tunnels made me claustrophic.

The architecture is spectacular :-)

oh that is definitely on the bucket list . I would also LOVE to go to Damascus one day . The thought of what that wonderful old city is going through now is just awful. Have you ever been there ?

The city is an architectural historian's dream, especially if you have an interest in the Crusades, the knightly orders and the Mameluke Sultans.

my daughter in law was born in Israel to parents who came from Damascus. Al-Amin is the old Jewish quarter, full of old houses and court yards that haven't even been painted since the Syrian Jews were expelled in the 1950s. Lily's parents and grandparents were multi-lingual traders who truly thought Damascus was the most beautiful city on the planet.