Lady Lucan died recently, but where is Lord John Lucan???

John Bingham, 7th Earl of Lucan (1934 - ?) was the older son of George Bingham, 6th Earl of Lucan, an Anglo-Irish peer. John’s mother went into full time care when he was a toddler and he was raised by a maid. After WW2, this good-looking but cold aristocrat served with the Coldstream Guards in Germany and later worked as a merchant banker.

But in his 20s he became a member of the very classy Clermont Club, spent a fortune on racing power boats and drove a very flashy car. In 1963 he married Veronica Duncan, a woman he did not like but felt obligated to marry because of their ad­van­c­ing ages (nearly 30). They quickly had three children.

Veronica had been beaten by her husband throughout their marr­iage with a cane and lash; then he had sex with her bleeding body straight afterwards! He was gambling full time and inevitably lost everything. John moved out of the Belgravia family home and a bitter custody battle ensued. He began to spy on his wife, intending to regain cus­tody of their child­ren, but he had spent all his money on gam­bling. Until his father died, this unemployed, very angry ar­is­t­o­c­rat would have no money to support himself or the child­­ren. As it happened, George Lord Lucan 6th died in Jan 1964. 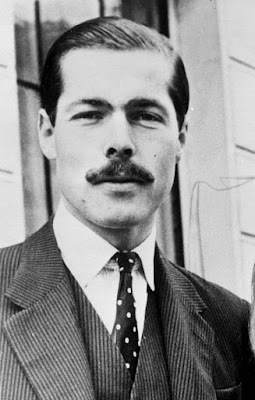 
Because of the canings, Lucan had his wife cer­tif­ied on the grounds of mental illness; SHE lost custody of her children.

Lady Lucan went downstairs for the cup of tea. There she met Lord Lucan, who attacked her on top of the basement stairs, hitting her over the head with the pip­ing. After grabbing his testicles, Veronica managed to escape. And covered in blood, she ran for help at the local pub.

In the meantime Lord Lucan drove for an hour to the home of Susan Maxwell-Scott, a Sussex friend. The friend didn’t call the police because she didn’t know about the murder. Yet Lucan said he had spotted a man attacking his wife while passing the family home, and “interv­ened to save his wife”.

On the 8th Nov, Lucan was seen driving from the Maxwell-Scott home. On the 10th, the car was found dumped in the port town of Newhaven, lead piping in the boot.

As Scotland Yard and Fleet St struggled to find Lucan, they met patronising attitudes from the upper-crust regulars of John Aspinall’s Mayfair Clermont Club casino. The Det­ect­ive Chief Superint­endent believed that gambler Michael Stoop’s car (a Ford Corsair) had been left in Newhaven as a decoy and Luc­an had quietly slipped out to South Africa. 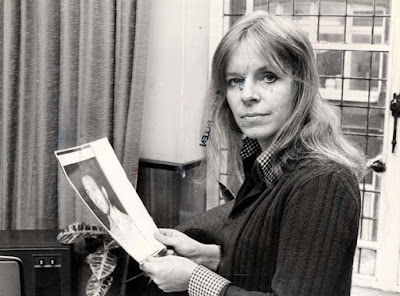 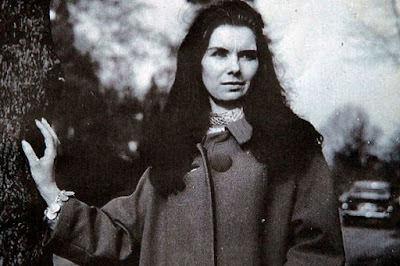 The Clermont Set did everything to protect their colleague. His friends warned him that, given the murder­, Lady Lu­c­an would get custody of the children and the family-trust mon­ey. But if he were to disappear, probate could not legally be granted on his estate for 7 years. In 7 years, his children would be just old enough to control the trust money. So, they agreed, Lord Lucan needed to vanish. But how? Not by fleeing abroad.

When artist Dominic Elwes told what he knew about the murder to the press, he found him­self blackballed by other Clermont Club members. In 1975 Elwes suicided at 44, probably hounded to death by some of Lucan’s more vicious gambling mates.

When confronted by sightings in exotic locat­ions abroad, Lady Lucan always dismissed them as nonsense. Her husband was not the sort of Englishman to cope abroad; he liked England; he couldn’t speak foreign lang­uages; and he preferred English food. She believed that Lord Lucan was indeed an expert power­boat racer, so he could bravely throw himself under a cross-Channel ferry. The ferry’s prop­el­lers would have chopped him up.

Lucan’s friend James Wilson agreed. When Lord Lucan realised he had killed the nanny by mistake, remorse and honour demand­ed suicide. He must have parked his car at Newhaven where he had a boat, weighed himself down and jumped over the side.

Since 1974 Lord Lucan sightings have popped up across the world, none more important than Australia. On Ch­ristmas Eve 1974, just months after the disappearan­ce, Australian police arrested a man in Melbourne thinking they’d caught Lord Lucan. British police and newspaper reporters quickly arrived in Melbourne. So close!! In fact, they had caught 48 year old John Stonehouse, the for­mer British govern­ment minister with a posh British accent. Two years earlier Stonehouse had faked his own death on a Florida beach.

Months later he was seen in Cher­bourg and St Malo, Fran­ce. Fingerprints from a beer glass in Cape Town were loc­at­ed next. Then a Scotland Yard detective claimed that Lord Lucan had lived as a hippy in Goa India until his death in 1996. Or he was in the rural town of Marton in New Zealand. Others saw him backpacking on Mount Etna, waiting on tables in San Franc­isco, being treated in a private hospital in Johannesburg in 1995, in Greece or in Botswana.  Later Lucan was seen working on a sheep station in the Australian outback.

Throughout her later life Veronica called herself Dowager to make her widowhood clear. Eventually Lord Lucan’s death certificate was issued by the High Court to his son, allowing George Bing­ham to become the 8th Earl Lucan. At her own death in 2017, Lady Lucan had been est­rang­ed from her own children for 40 years. Nor had she ever met her 5 grandchildren.

The medical records of one of the UK's most eminent Harley St plastic surgeons, Dr John Watson, remained hidden since the nanny's murder and Lord Lucan's disappearance. The records, which showed that Dr Watson did facial surgery on the Earl of Lucan after a speedboat accident, were found by daughter Carolyn Watson Allen (in Queensland) and shared with the BBC in 2013.

Hello Hels, Nice people! It seems incredible that club members would go so far as to protect a murderer, especially since that might implicate them in the crime. Since his disappearance, John Lucan has apparently been busy making more mysterious appearances than Elvis or Judge Crater!
--Jim

I remember when Stonehouse was arrested. That the club members conspired to cover up for Lucan and evade justice is beyond the pale.

Lady Lucan's brain must have been beaten too often. "When Lord Lucan realised he had killed the nanny by mistake, remorse and honour demand­ed suicide". He did not know the meaning of honour.

I don't suppose that the Clermont Club was any more moneyed, aristocratic or filled with a sense of self importance than any other gathering of British men. The club members KNEW the police found Lucan's car with the maid's blood and brains on a lead pipe. Yet they still did everything to protect their murderous colleague and did everything they could to hamper the police.

Stonehouse and Lucan were both born in the interwar era, shared an educated accent and powerful friends, suffered from financial crises and faked their own deaths. But Stonehouse was wanted for fraud, theft and forgery, not for the brutal beating of his wife or murder.

Lord Lucan would not have recognised honour and remorse if those qualities had slapped him in the face. But that doesn't explain Lady Lucan's total denial about her husband's decisions for the rest of her life, nor does it explain why her children never spoke to their mother again.

We had a scandal in the family when a cousin-by-marriage defrauded virtually everyone he knew, including his wife's uncles, brothers and brothers-in-law. In fact, I think the only reason he didn't approach me was because he used to be be my accountant and he knew I wasn't worth much (financially speaking!). The point of this digression is that his wife and children stood by him and even deriding family members for not doing likewise. This makes it easier for me to understand Lucan's family. See: https://www.accountancyage.com/aa/news/1777105/chartered-accountant-retrial-vat-fraud
CLICK HERE for Bazza’s frolicsome Blog ‘To Discover Ice’

The disappearance always was a strange case. I guess we will never know the truth.

I have read stories of family members defrauding, defaming and even murdering family members. But no family ever believes it will happen to them! As you noted so sadly, the damage done remains forever; even the relationship with siblings, in laws and grandchildren are tainted beyond repair.

In my family, an in-law (a doctor by the way) tried to get my mother's doctor to euthanise mum at 90. Euthanasia was illegal in Australian law back then, it has always been against Jewish law, and most importantly mum was bright, alert and energetic. All the professionals promised to protect mum against the in-law, yet a fortnight later mum was suddenly dead. In the three years since, I have never seen those vile relatives of course, but I have also had to have heart surgery for myself :(

agreed. There must be many cold cases across the world, cases that are never solved because the witnesses are either dead or in hiding, or because the scientific skills back then were not sophisticated enough. I think this particular case stands out because the nobility were involved up to their navels.