The Rock of Gibraltar is a nar­row sandy isthmus off the Iberian Pen­in­sula. Being limestone, the 6sq km Rock is riddled with 140+ caves. Off the eastern cliffs of the rock a flat, sandy plain stret­ched out towards the Mediterranean.

The Strait of Gibraltar is the narrow neck separ­ating Europe from Africa, the only link between the Atl­ant­ic Ocean and the Med­iter­ranean Sea. Sin­ce the Prophet died in Medina in 632 AD, the pro­g­ress of Islam’s armies was rapid. Berber Tarik-ibn-Zeyad land­ed in 710 AD and from 742 on, the Moors defended their rock with a fort.

In 1068, the Arab Gover­nor on Gib­ral­tar ordered that a strong­er Moorish Castle be built to watch events across the Strait. The castle had the largest keep and the tallest towers in all the Iberian Peninsula, plus buildings, gates and for­tified walls. In 1160 the Caliph of Mor­occo commissioned a fully fortif­ied city. The Rock rem­ain­ed in Arab hands until an unexp­ect­ed Spanish attack between 1309-33, then it re­v­ert­ed to Arab cont­rol. The Moors’ City Walls surrounded the city, later strengthened by other nations.


The King of Castile’s troops finally captured Gibraltar from the Moors in 1462 and perman­ently expelled them. 3 years later, the Duke of Medina's son was confir­med as the owner of the Rock by Royal Decr­ee. When Isabella bec­ame Queen of Castile in 1474, she wanted Gibral­tar back. She granted Gibraltar the Castle, Key and Coat of Arms. Note Gibral­tar’s flag: a three-towered red castle and key. 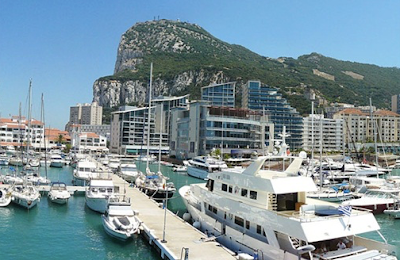 Spain retained the Rock, and used it as an important naval base. The opp­ort­un­­ity for Brit­ain to capt­ure Gib­raltar arose with the War of the Sp­an­ish Succes­sion (1702-13). The Rock became a pawn in the strug­gle between rival claim­ants to the Spanish throne, Frenchman Philip V of Anjou & Austrian Archduke Charles III. When the Rock fell to an Anglo-Dutch force in 1704, all Spanish inhabit­ants left for  Spain. 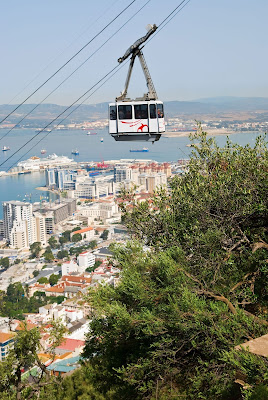 The Rock was for­mally ceded by Spain to Britain under the Treaty of Utrecht 1713 and was used as a trad­ing post. But Spain was never able to accept their lost terr­it­ory. The worst siege was France and Spain’s Great Siege in 1779, which last­ed 3.5 years. The Gov­er­nor put guns into the precipitous north­ern face by tun­n­el­ling through the rockface.

In the Battle of Trafalgar 1805, Napoleon was allied with Spain in planning an invasion of Bri­t­ain. The British fleet was commanded by Horacio Nelson and the combined Franco-Spanish fleet was command­ed by Gen Villen­ueve. For two years, the fleets chased each other around the At­lan­tic and Mediterranean, before finally clashing at the Battle of Trafalgar where Nelson died.

The mid C18th census showed the Jewish population to be 575 out of 1,800 civilian inhabitants (32%). Jews were given the right to permanent settlement in 1749, when the community's first Rabbi arrived from London and established the Great Synagogue. Three more synagogues were built as the Jewish population continued to grow into the mid-19th century. Today Gibraltar's Jewish community has five kosher institutions, one primary school and two high schools.

Given Gibraltar's historical military role, it was not till the early C19th that the military gov­er­nor focused on civ­ilians’ social needs. By 1815 the governor created the Grand Par­ade, where loc­als could walk out of the ext­r­eme heat. Grand Par­ade became a hub of cerem­on­ial military events.

In 1817 the Exchange and Comm­er­cial Lib­rary was foun­d­ed for ci­vil­ians. Soon after, a Charter of Jus­tice was grant­ed, civilian magi­s­tracy establ­ished and civil rights were given to citizens. A Sup­reme Court was created, with a chief justice and jury system. In 1830, responsibility for local affairs was trans­fer­red from the War Office to the Colonial Off­ice, and the status of Gibraltar was ch­an­ged from the “Garrison of Gibraltar in the Kingdom of Spain”, to the “Crown Colony of Gibraltar”. A local Police Force arrived in 1830. 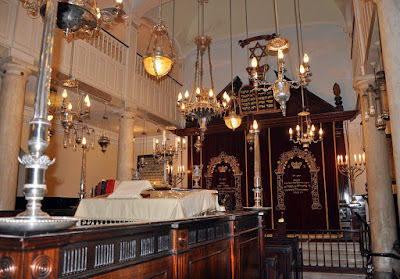 At their peak in 1865, Gibraltar's fortifications housed 681 guns mounted in 110 batteries, guarding all land and sea approaches to Gibraltar. Lord Airey's Batteries were completed in 1891 and are located at the highest point on Gibraltar. The Military Heritage Centre is housed in one of the many batter­ies still found today.

The promenade was ex­pan­ded to include 8 hectares of land for the Alameda Poplar Gardens. The gar­dens were laid out with int­er­connect­ing paths and terr­ac­ed beds of local limestone. Gas light­ing was intro­d­uced along Grand Parade.

In WW1 Spain remain­ed neut­ral and was not a danger to Gibr­al­t­ar. But Ger­m­any’s growing power led the British Government to expand its Navy. This heightened Gibraltar's role as major naval base, to keep the St­ra­its clear of en­emy shipping. The Bay developed modern dock­yards, harbour and repair facilities for Al­­lied warships. 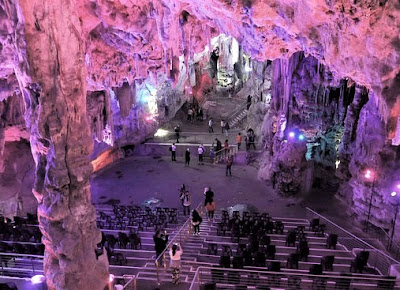 By 1939 Mussolini join­ed Hitler, and a new theatre of war op­en­ed in the Medit­er­ranean. There was a very real danger that France’s Gen Franco would join the men who had help­ed him win Spain, imperilling Gib­ral­tar. The Royal Eng­ineers added c40Km of tun­nels and chambers, dug out of the lime­stone. An un­derground city grew, with its own hospit­als, elec­tric­ity, telephones, water distillers and foodstores.

The civil­ian population was evac­uat­ed to Britain and Jamaica, and 230 years of political gains under British rule seemed lost. However read how this isthmus played a role in defeating Hitler: Defending The Rock, Nicholas Rankin, Faber & Faber, 2017. In any case, the post-war years saw a growing demand for greater self-govern­ment, plus prog­ress in medical, educat­ional and housing services.

Perched on the peak of the Rock is the Top Station of The Cable Car 1966. There are great views across the Straits of Gib­raltar to Africa, to Spain and the Medit­erranean. This Cable Car was constructed by the Swiss, but within the Top Station complex there is an “English” pub and shop.

In 1963 Gibraltar's status came before the UN Special Com­mittee on Decolonisation. A 1967 ref­er­­en­dum asked Gibr­al­tans whether they wanted to remain British or become Spanish. 12,000+ people voted for Britain while 44 chose Spain!! Nonetheless Spain caused the complete clos­ure of the border in 1969. Gen­ Fra­n­co had besieged the ter­r­­it­ory and cut it off, by telephone, land and by sea. 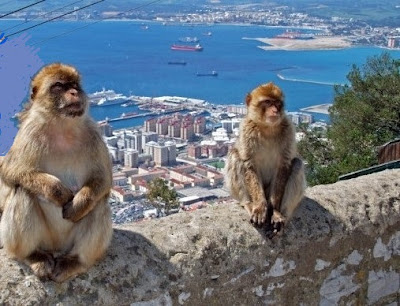 Gibral­tar (pop 34,000) was granted a new Constitution by Britain and their House of As­s­em­bly was estab­l­ished. The New Constit­ution of May 1969 stated that Gibral­t­ar would never be handed to Spain without an Act of Par­liament and without the peo­p­le's consent. Gibraltar gained cont­rol over its own civil service, and power now lay in a democ­ratically elected gov­ern­ment under a Chief Minister. In 1973 Gibraltar joined the EU.

Franco’s death in 1975 led to an ag­reement which de­cl­ared that both UK and Spain were comm­itted to solve all dif­f­eren­ces; Spain would lift the restrict­ions. The ele­ction of a soc­ial­ist government in Mad­rid oversighted the full opening of the border in 1984. Today Gibraltar is a British Territory that is self-governing except for foreign policy, which is controlled by Britain.

A former building for Franciscan friars, The Convent was named in 1531 by a wealthy Spaniard. Today it is the res­id­ence of Gibraltar’s Governor, the Queen's re­p­res­entative in Gibraltar. The red brick Jacobean style frontage is perfect for the weekly Chan­g­ing of the Guard.

These days Cathedral Cave mak­es a unique crystalline audit­or­ium for music, ballets and dramas. The mosque once built in the city centre for the Muslims was later converted by the Spanish into a Catholic church, now Cathedral of St Mary the Crowned. 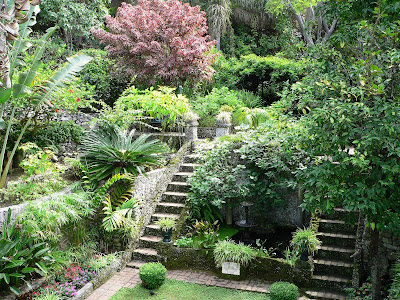 By 1991 Alameda Gardens were con­verted into the Gib­raltar Botan­ical Gardens, a paradise for wildlife. At the Barbary Apes' Den see apes up close, and see the whales and dolphins in the Bay below.

Hello Hels, I was wondering what happened to this post! Recently I was reading Mark Twain's The Innocents Abroad (which I plan to write more about later), describing a trip to Europe and the Mideast he took in 1867. He corroborates your account, saying that "Gibraltar is clad with masonry and bristling with guns." He goes on to describe a humorous story about how every guide there endlessly recounted a doubtful legend about "The Queen's Chair," implying the gallantry of the English troops.
--Jim

It's a fascinating history and you've researched and pulled it together really well - there's a lot of work in this. I've never been, but remember various family members/family friends talking about the base when I was small; it always sounded so grand.

Gibraltar is just 6.5 sq ks in total. If it was a sovereign state, it would rank between Monaco and Nauru is smallness. Yet the history, geography and architecture of this isthmus is chockablock with interest.

If you are touring Granada, Seville and Jerez anyhow, just nip off for two days as a side trip to Gibraltar.

by base, do you mean military base? When the British Government expanded its Navy to keep the St­ra­its clear of en­emy shipping in WW1, I think everyone suddenly became aware of Gibraltar's role as major naval base, dock­yards and repair facilities for British and other Al­­lied warships.

By 1939, even more so when Hitler, Mussolini and perhaps Franco were about to launch a new theatre of war in the Medit­er­ranean. Gibraltar was punching above its weight.

Many thanks. The Great Synagogue was founded in 1724 by a Rabbi from London on land granted to the Jews by the Governor of Gibraltar. The second and third synagogue buildings were destroyed during attacks by the Spanish, so I will add a photo of the fourth building on the same site.

While Gibraltar is very interesting and I know some of its more modern history, but I wasn't aware of a Jewish population. Of course things there are rather complicated as Gibraltar stares at Brexit.

The EU will support its own members, and if there is a Gibraltar crisis, that means Spain. Malta is fortunate it became a sovereign state _before_ Britain devised Brexit.

Very interesting account of the history. It is a place I have not been to.

I loved living in the UK, particularly because travelling around Europe was so cheap and easy. But Gibraltar is even easier because it is a British Overseas Territory. Enjoy!

Gibraltar is a truly remarkable place that punches well above it's weight in European history. I was unaware of the strong Jewish presence. I hope they keep the guns in place; you never know with Johnny Foreigner!
CLICK HERE for Bazza’s propitious Blog ‘To Discover Ice’

The most popular organised tour is called the Military Rock and Tunnels Tour that includes visits to the super guns, the Great Siege Tunnels, the Military Heritage Centre and the Navy Base. But be a good walker :)

🙂Your Post are gorgeous and useful.Thanks for sharing your good experience with us.You is an amazing artist! 🙂🙂

many thanks. I am a very good historian, but alas I am not an artist in any genre.

Have you ever been to Gibraltar?