Petra - a Nabatean, Roman and Byzantine sandstone city in Jordan

The Nabataean Kingdom once stretched from Dam­ascus and in­cl­uded parts of the Sinai. Located amid rugged desert canyons and mountains in what is now the SW corner of Jor­dan, Petra was once a thriving trad­ing centre and the capital of this kingdom from 400 BC–106 AD. I have spent only 1.5 days of my entire long life there, well worth the tour from Amman or Jerusalem.

The Nabateans were Arabic-speaking nomads who sel­ected the best oases to set­tle in. And they used the inac­c­es­sib­le moun­tains to pro­t­ect themselves from bandits.

But these people were a desert people, so they had no archit­ect­ural heritage of their own. The Petra style was therefore from various influences absorb­ed al­ong the trading routes: Egypt­ian, As­syrian, Hellenistic, Mesopot­amian and Roman imagery. 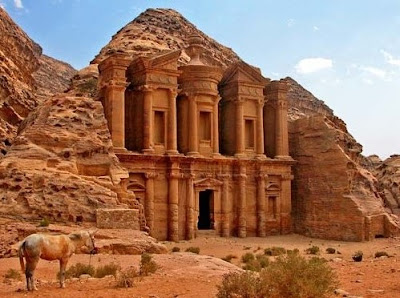 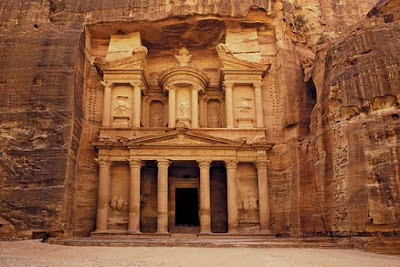 By the C2nd BC, Petra was already in­ternationally famous for its natural and archit­ect­ural beau­ty, for its wealth and its pink colours. Petra had c30,000 people who used their knowledge of the desert to become a junct­ion of the main caravan routes; spices came from the east to Egypt and the Mediter­ranean, all of it taxed in Petra.

Apart from the large, carved funerary monu­m­ents, ordinary fac­ilities were also built eg baths, houses, theatres, water pip­es, cisterns, temples. The vast tracts of the Nabat­aean Empire can be seen in the re­mains of their innovative networks of water cap­t­ure, stor­age, transport and irrig­ation systems, showing how survival in this desert landscape flourished.

To get in, the visitor had to go via 1.5 ks of a nar­row siq-gorge, sur­rounded by staggering 100m cliffs made of sheer pink sand­stone. The siq’s entrance used to be marked by a Roman archway, but now only the vertical ruins are visible. 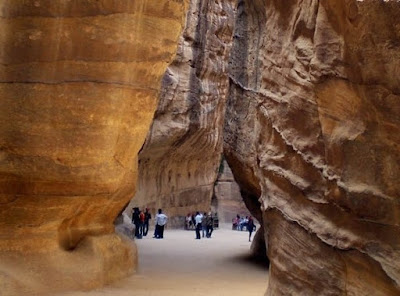 Enter the city via this pink sandstone sik/gorge

Petra’s siq first opens onto the vast façade of the C3rd BC Treasury and its tow­ers, precisely and deeply carved into the soft sand­stone mountainside. Built as a royal tomb, there was a constant belief that the giant urn carv­ed into the centre of the second tier contained vast, hidden gold. But while the grand ed­if­ice was a state­ment of their wealth, the building was actually just a hall.

There are dozens of tombs and other built struct­ures within Petra. The space from the Treasury to Qasr al-Bint is Petra’s main central business district, with the outlying hills further away. Though the weather-worn rock­face is still peppered with ancient dwellings and sepulchres, many are more modest and some are unfinished.

Alas for Petra, its increasing influence and prosperity was seen as a threat to Rome; in 106 AD, Emperor Trajan ann­exed the Nabataeans into the Roman province of Arabia, with Petra as the capital. Once Romans took control of the trade routes, diverting them towards Bosra, Petra's decline was inevitable. This decline was worsened by early C6th earth quakes.

There was a sec­ond building resurgence during the later C6th AD, this time under Byzantine rule when Christian­ity arrived. Many buil­d­ings were converted to church­es.

Which might explain why the tomb/hall was called a monastery. Following the route walked by the faithful, the Monastery was later re-purposed by the Crusaders as a tem­ple. Crosses etched into the walls inside the building showed the Byzantines’ priority. But, still, why did religious pilgrims come to Petra?

Petra had been the location of many Biblical events. Moses struck a rock here, in order to give water to his people en route from Egypt to Israel. And the altar where Abraham intended to sac­rifice his beloved son Isaac was also here. Lastly note a small white mosque called Jebel Haroun, the biblical mountain tomb in Mount Hor where Moses’ brother Aaron was buried. Aaron was sacred to Jews, Christians and Muslims.

Note the smallish plat­form known as the High Place of Sacrif­ice. The altar was a sacrific­ial site where priests cut the throats of beasts, in front of the pilgrims. 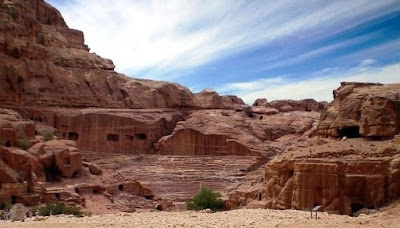 Next to the Treasury is the C1st AD Ampitheatre, dug out of the mountainside. Apparently there were surrounding build­ings, but the Romans pulled them down bec­ause they spoilt the site’s acoustics. The 33 concen­tric tiers of seating could hold 8000 people in the audience!! People packed in for poetry read­ing, pantom­imes and especially Roman gl­adiatorial contests.

So Petra is a place that has borne witness to the rise and fall of one civilisation after another. Yet the city remained hidden from the West since the time of the Crusad­es because lo­c­al Bedouin tribes fear­ed an influx of greedy treas­ure hunters.

In 1809, Swiss explorer Johann Ludwig Burck­hardt moved to Aleppo, as part of his work with a British assoc­iation seeing the source of the Niger River. He mastered Arabic, converted to Islam, wore a full beard and took the name Sheikh Ibrahim bin Abdullah. En route to Cairo, he heard rumour of ruins hidden in the Wadi Musa mountains!! But the locals need not have worried - the treas­ure Burckhardt sought was scientific not profiteering. 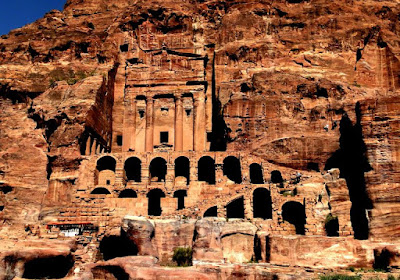 Burckhardt’s plan in 1812 worked. When he entered Petra, he was the first outsider to do so for centuries. He was amazed by countless tombs and the great amphitheatre carved into the rock. Having surprised his guide with his incursions, Burck­hardt was hurried to the city’s parched core, the Colon­naded St and Qasr al-Bint. Burckhardt dared venture no furth­er; his ex­ploration of Petra was soon over. Luckily he had secretly made notes and sketches in his diary. Burckhardt sent a letter back to his colleagues excitedly reporting his discovery, but he hardly had time to enjoy his fame. He died in 1817, at 32.

With no surviving written sources, Petra’s built environment provides academics’ most valuable resource. Scholars know the Nabataeans were in Petra since 312 BC, yet no one has found any archaeological evidence from back then. Clearly most of the city is still underground. Now modern archaeological research is continuing by Jordan­ian, Israeli and foreign teams. In 1985, Petra was declared a UNESCO World Heritage site.

Hello Hels, Petra is certainly an amazing place. I wonder about the stability of a rock-carved city like that. It seems to me that if you cut too many holes in a rock bed, there eventually will be a general collapse, especially with the occasional earthquake. Mines give me the same feeling, and certainly there have been mine cavings-in. Petra has been standing for thousands of years, a testament to its quality and stability, and I suppose that today they have engineers to pass on its safety
--Jim

Our guide said those Nabateans must have been excellent traders, once they gave up the nomadic life and settled in Petra. How else would they have attracted the caravan trade from distant empires to their hot, dry city?

I have only spent one day inside Petra and I too was stunned by the engineering. I don't know about war damage, but I did see that the ampitheatre's features have eroded since the flash floods and earthquake that happened in Petra 200 years after the theatre was built.

I know that flash floods occurred in 2011 and 2016, so there is every reason to expect they happened throughout the centuries.

Those early engineers were clever sods. Hydraulic engineers today are still impressed with how the Nabateans transported water 10 ks from the source to Petra by carving out pipe ridges along the mountains. Imagine designing and building long-haul pipelines to provide totally reliable drinking water for humans and animals in a desert.

not just brilliant traders but crop growers as well. That rocky dry desert town brought enough water in to farm wheat, grapes and olives just outside the siq. And because the pipes channelled the water to the underground cisterns for storage, there were secondary industries inside the town as well - wine and oil production.

Leah visited Petra with a Israeli Government sponsored WIZO tour (she also saw a lot of military things not generally available to tourists). She described Petra as a "vision in pink". I have wanted to visit ever since and I will one day! I bet you know someone to offer a tour?
CLICK HERE for Bazza’s quidnuncic Blog ‘To Discover Ice’

you have to travel from Jerusalem or Amman, but well worth the effort. I like to think I have seen a lot of private and public architecture in various countries from different historical eras, but I have never seen anything quite like Petra. Cappadocia probably came closest.

The tour guide who gave me the notes for the Acre/Akko post is excellent in Israel, Jordan and Egypt: Naftali Tours (http://www.naftalitours.com/)

So Hels is there anyone living there now or is it just an archaeological sight ? How big is it say compared to the center of Melbourne . One only ever sees very few pictures of Petra so getting a sense of it surviving size is a bit hard to imagine .

there are very very few residents in Petra. I didn't see anyone with my own eyes, but one local said there were a few guards and guides living inside the caves.

Petra is surprisingly large - it extends along river beds, into the canyons and most surprisingly up steep mountain-sides. The siq by itself is almost 2 ks long.

You need to be fit! Fortunately Movenpick Petra is located directly at the entrance to the town, in case you need food and resuscitation.