Rodrigo de Borja was born near Valencia in 1431; he was the son of a Spanish noble fam­ily who lived comfortably in the court of Aragon. The family did even better when Alonso de Borja, Rod­rig­o's uncle, was made bishop of Valencia. Later the very elderly Alonso became Pope Callixtus III in 1455.

Alfonso, king of Aragon & Naples, pur­sued his own territorial aims rather than supporting the Pope’s war against the Turks in Constantinople, so Pope Callixtus determ­ined to app­oint his own fam­ily as the next king of Naples. He also put two nephews in as cardin­als, and made one nephew Pref­ect of Rome. The papal court started to look like a Spanish club.

It didn’t last, but Rodrigo Borgia did well. He studied in Val­en­cia and then specialised in law at Bologna. In 1456, Uncle Alonso made him a cardinal, and then vice chancellor of the Cur­ia. App­arently this was a VERY lucrative position; Rodrigo held it during the next four pont­ificates.

Rodrigo was endowed with bishoprics and abbeys around Rome. These benefices brought him so much money that he build the most lux­ur­ious palace in all of Italy. Rodrigo’s plate, pearls, his stuffs embroidered with silk and gold, his books were all of such qual­ity as would befit a king or a pope. He possessed more gold and rich­es of every sort than all the other cardinals put together.

Rodrigo had many children, including 3 ack­now­ledged children early on, and another four (Juan, Cesare, Lucrezia and Joffre) with Vannozza Catanei. At 61, Rodrigo Borgia became Pope Alex­and­er VI (1492-1503). So how did a man who openly made a fort­une out of his family connections in the papacy, and who op­ened fathered children all over Rome, become Pope? He brib­ed his way through the entire college of card­inals! They said of him "Alex­ander sells the Key, the Altar, Christ Him­self - he has a right to, for he bought them". 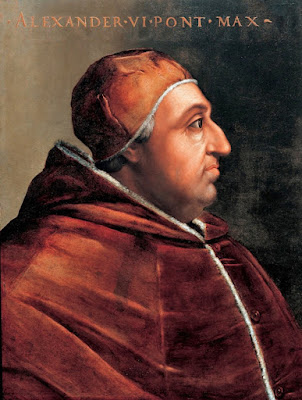 Pope Alexander VI wanted to make the city a fit­ting centre of world Chris­t­endom, using his prin­ce­ly pat­ron­age to dis­play family pow­er. The two parts of Rome (the Vatican and the main city) were re­planned and expanded, with imposing new build­ings and monu­ments. Roads between the major churches were straight­ened, and important gates and bridges made pilgrimage and relig­ious proc­essions easy. The new St Peter's dominated the Vatican district, and the popes domin­ated St Peter's. Rome's population doub­led.

But somehow we mostly seem to remember his nepotism. Nepotism was already widely practis­ed in the papacy; after all, a pope could trust his own family marg­in­al­ly more than he could trust strang­ers. But the Borg­ias rais­ed nepotism to record levels.

Son Juan was made Spanish duke and married the cousin of the King of Castille. Daughter Lucrez­ia was left as regent in charge of of­­ficial busi­ness when the Pope had to leave Rome. Son Joffre was mar­­r­ied off to a Neapolitan princess. Teenage son Cesare was giv­en a number of bish­op­­rics, and on the day of his father's coron­at­ion, Cesare re­ceiv­ed the premier Archbish­op­ric in Spain, Val­en­cia. In time, Pope Alexan­der changed in his attitudes towards Spain, marrying Cesare to a French princess, and agreeing to par­t­ition the Kingdom of Naples between France and Spain.

At the end Pope Alexand­er had been well; suddenly he and his son Cesare were des­pera­t­e­ly ill. Was it malaria? was it poison? Pope Alexander VI died and was buried in St Pet­er's, later to be moved to the Spanish national church in Rome, San­ta Maria di Monser­r­ato. He was buried with the other Borgia pope, his uncle. 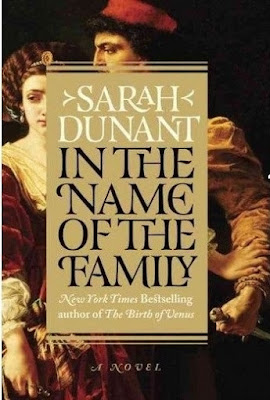 Sarah Dunant's novel, 2017
In the Name of the Family

So some popes were sexually active during their lives in the church; consider for example Popes Paul II, Sixtus IV, Leo X and Julius III. After all, the Second Vatican did not make cel­ib­acy a pre-requisite for ordination until 1139 AD. Yet when Sarah Dunant wrote on the campaigns of the Borgia Pope Alexander VI (1431-1503) in her novel In the Name of the Family (by Virago), it still came as a bit of a shock.

Cesare Borgia’s military campaigns were at the centre of the no­v­el. As was Lucrezia third marriage, to Alfonso d’Este of Ferrara. I was not thrilled to read about the French Pox, which hit Naples in the 1490s, despite clearly understanding its shocking impact.

Diplomat and writer Niccolò Machiavelli (1469–1527) be­came more central to this novel because he really did witness the fierce state-building methods of Pope Alex­ander and his son Ces­are Bor­gia. Another import­ant source of “information” for Sarah Dunant was the poet-scholar and Cardinal, Pietro Bembo (1470–1547).

Can we learn history from imagined data, even if it sounds sub­stantial? And can we rethink the reput­ations of dis­rep­utable, defamed ch­aracters we have known for a long time? Donizetti opera pres­ented Lucrezia Borgia as a mass murd­er­er who slept with most of the men in her own and other leading families, as did Victor Hugo in his play by the same name. The Prince was a political treatise by Niccolò Machiavelli that proposed Cesare was a clev­er, ultra-ambitious and deceitful man who never did what anyone expected. Eventually “Machiavel­lian” has gone into the language as an ad­j­ective for this extreme ambition.

One reviewer described in gross detail, how Dunant’s characters copulated, defecated and menst­r­uated; they got flu and suffered constipat­ion, sweated from fev­er, shivered from cold, and scratched at pox-scabs note what prostitutes used for greasy contraception and how people cleaned their teeth with vinegar mixtures. Mark Lawson also focused on dramatic natural events: sea storms, plagues and childbirth.

Dunant’s novel about Machiavelli and the Borgias is a good way to learn Italian history, but don’t read it if you already know a great deal about this hist­or­ical era. You will feel obligated to make corr­ections on the novel’s pages, over and over again.

No danger of me making any corrections. I remember skimming through a rather titillating book about the Borgias in my teen years.

I suppose each royal and religious leader throughout history has put his relatives in positions of power. Think of Napoleon who gave each of his many siblings a nation in Europe to rule.

But at least the ruler should wait till the relatives are old enough to lead communities. Pope Benedict IX, nephew of two other Popes, was still playing marbles with his mates when he was elevated to the papacy.

Hello Hels, I think that nepotism, and its first cousin cronyism, are here to stay. Just look at the Trump administration. Also, I worked for a company in which the president and several of the vice presidents had the same last name (many of the other VP's were his buddies who seemed to have no business sense or experience at all)--together, they drove a prosperous company right into the ground.
--Jim

I wrote an essay on this family years ago. Of all the Borgias, Lucrezia was by far the mostly badly damaged by her family.

As always, a thought-provoking and interesting post Hels. The point I was most taken by was how we might or might not take historical novels as 'history'. It's a kind of unwitting evidence so what we must do is evaluate the author and learn whether, generally speaking we can trust her writing. However, what a novel needs to do primarily is tell a good tale - the author has no compulsion to do otherwise. I don't think Sarah Dunant's novels pretend to be anything other than what they are! Food for thought....
CLICK HERE for Bazza’s floccinaucinihilipilificatious Blog ‘To Discover Ice’

I wonder if nepotism was even a concept back then, or if it was, perhaps it meant something warm like "avuncular family support". I suppose it didn't matter when nepotism meant Uncle Harry taking in his 4 nephews into the knitting mill, grooming them to take over the family business one day. But filling the College of Cardinals or the House of Lords with nephews sometimes proved to be a very poor decision that impacted vast populations.

long ago I decided never to read a novel or see a Hollywood film about a part of history that I know in a scholarly fashion (eg the Stuarts and the Georgians). On the other hand if I know nothing of the history of a nation or an era (eg Greek or Roman history), then I am not remotely offended by any fictional representation.

So why read In the Name of the Family? Because the suggestions of sex and power within a family are still seductive today.