The history of youth hostels - from Israel to Britain!

The German Youth Movement, a cultural and educational movement that started in 1896, worried about the health of poor city youngsters. The children needed to enjoy the fresh air out­­doors and to be physically active in team sports and physical education.

Now to the German citizen Rich­ard Schirrmann (1874-1961) who studied to become a teacher, graduated in 1895 and was sent to Altena in West­ph­al­ia in 1903. On a trip out of town, the students had to spend their nights in dismal barns or inappropriate village school build­ings. Schirrmann felt that students should see new sights and have new experiences outside the classroom, because people learned best by observation.

Schirrmann had became alarm­ed, he wrote, at the impact of Germ­any’s ind­ust­rial revolution on students' health and welfare. So in 1909 he first published his idea of cheap and healthy over­night accom­mod­ation for young people. He rec­eived plenty of support, enabling him in 1912 to op­en­ his first youth hostel in the rebuilt Altena castle, above the River Lenne.

Although Schirrmann’s first youth hostels in Germany had no con­nection to do with the German Youth Movement, timing was critical! Not only did poor city youngsters need to enjoy the out­­doors; they had to care for the hostel them­sel­ves wherever possible. This kept the costs down, built charact­er and a sense of independ­ence, and helped make new friends.

Schirrmann served during the tragic WW1. But after the war, Schir­r­mann wondered if "thoughtful young people of all count­ries could be provided with suitable meeting places where they could get to know each other". So in 1919, he founded a youth hostel ass­oc­iation, and in 1922, he retired from teaching to focus entirely on his project. 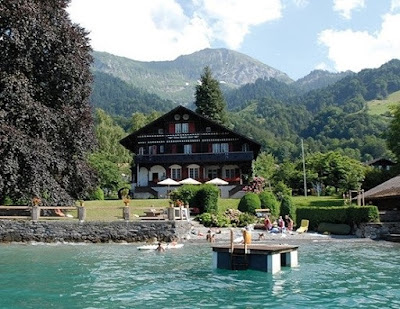 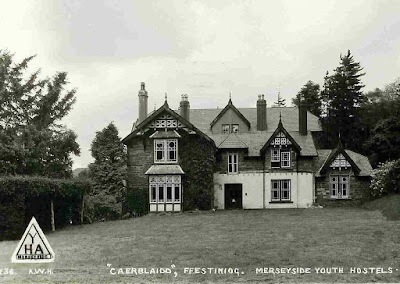 The movement flourished in Germany, with 2000+ youth hostels operating before the Depression. By then the youth hostel concept had spread all over Europe and beyond! In 1932, a for­mal organisation called the International Youth Hostel Fed­erat­ion was founded in Amst­er­dam, consisting of youth hostels from Switz­­er­land, Ger­m­any, Poland, the Netherlands, Norway, UK, Ire­land, France, Czechoslovakia, Denmark and Bel­gium. Under Schir­r­­mann’s chairmanship, the organisation grew and grew.

These hostels provided budget-oriented accommodation where young people could rent a bunk bed in a dormitory, and share a bath­room, lounge and sometimes a kitchen. Hostels were often cheap­er for both the operator and occupants; many hostels had long-term residents whom they employed as desk agents or house­keepers, in exchange for cut-rate accommodation.

Ominous European political currents overshadowed much of the international movement in the late 1930s. Some hostels were closed, and others were appropriated by governments for milit­ary purposes. The operations of many European associations were suspended.

By the time Joe and I were in Europe (1970-5) we stay­ed in youth hostels in Israel, Cyprus, Greece and every country en route to Britain. In any case, in the later C20th the needs of the modern-day traveller were chang­ing. Young people who travelled widely wanted more private rooms, better toilets and hot showers, and they wanted to book on-line.

Today there are Youth Hostels in cottages, castles, mansions and in modern buildings, in towns and in the countryside. These sociable places are open to ev­eryone and they don't pay any kind of profit to private concerns. 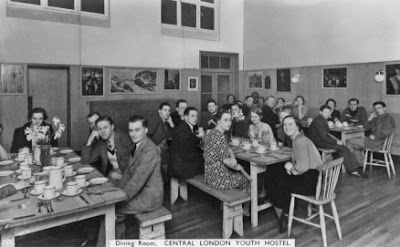 To show that youth hostels can be cheap AND fascinating, the Daily Mail suggested some great places. Guests go through the old triple portcullis gate­house of St Briavels Castle, Gloucs and into a secluded courtyard and walled garden. Then go into the West Tower for a royal welcome to King John's C13th hunting lodge. The Castle also boasts a Chapel, gallows and a prison. It costs £18 for bunk bed.

Beverley Friary is nestled in East Yorkshire, in the heart of the market town of Beverley. Visit the Yorkshire coast line and nearby Hull during the day, and at night, retire back to beau­tif­ully restored Dominican friary (£13 a bed), cited in the Canterbury Tales.

The Guardian recommended Abbey House in Whitby, North York­shire. Whitby youth hos­t­el sits on a magnificent head­land. The pastel-hued rooftops of the town are spread out below, while the North Sea crashes beyond the harb­our wall. And see the well preserved ruins of Whitby Abbey behind. The bedrooms (£18.50 per night) are very spartan, but the building is well preserved C17th hand-carved banist­ers. And note it was from Whitby that Capt Cook sailed to Australia.

Ottawa Jail Hostel in Canada offers a unique mix of shared and private jail cells, as well as traditional hostel style rooms, starting at £12. Formerly the Carleton County Gaol Jail, it is an historic landmark in the heart of the city. 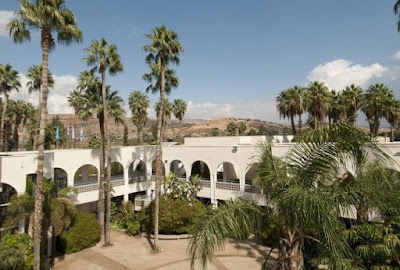 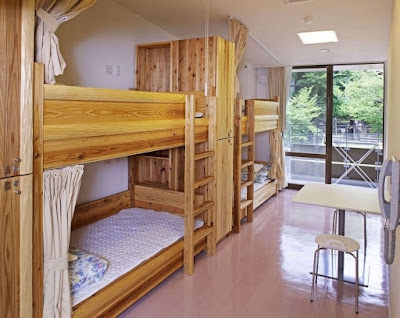 My own favourite is Karei Deshe Youth Hostel Guest House, situated on the Sea of Galilee in Israel. The guest house is built around a beautiful inner courtyard, with palm trees, lawns and great sea views. Each room has 2, 4 or 6 beds and each has its own bathroom.

My wife and I have a great suggestion. Train Lodge Amsterdam offers accommodation in a train hostel near Sloterdijk Station. Each former train carriage in the old Zurich Night Train is decked out to look like a hostel room that contains four bunk beds.

Hello Hels, There seem to be so many interesting international hostels. I only stayed in one once, in New York in the Adirondacks, on the way to Canada. It was not the most pleasant of places--the people running it were nice, but I was not encouraged to try others.
--Jim

Yes! For decades the youth hostels were easily reached, readily affordable for backpackers and with limited facilities. But now the Train Lodge Amsterdam has shown that the bunks can be comfortable, refined and still much cheaper than city hotels.

Most of my experiences in youth hostels happened during 1970-1975 when spouse and I had no money but years of great travelling experiences from Israel to Britain.

To be very honest, it wasn't always easy - I did not enjoy other travellers' hairy armpits, snoring and shared showers. But as you found yourself, thankfully there was a suitable service for younger travellers.

I don't think hostels would be for me, but how interesting their history is. I think their standards are much higher now than when I would have been of an age to use them.

Even back in 1966, my first year using youth hostels, the Argentinians and Brasilians in the group thought we Australians were too precious :)

I wish there were Oldie Hostels for my generation! But, coming to think of it, it's hard to get Leah into anything below five star luxury which is not really my ideal.
I think the idea of Youth Hostels is terrific although I never stayed in one. I understand that the YMCA organisation can be a good choice for young travellers too although I know nothing about it.
PS: My Melbourne friends have just moved to Cowes on Philip Island. We intend to be there in two years time and also at her sister on their 20 acre St Andrews plot.
CLICK HERE for Bazza’s unbelievably felicitous Blog ‘To Discover Ice’

there were always five star hotels. The genius of Rich­ard Schirrmann was that the vast majority of ordinary people were really excluded from travelling their own country, let alone other countries. I remember sleeping in caravan parks, when there wasn't enough money for a youth hostel .. and eating a LOT of bread and cheese for months on end.

You will love Cowes on Philip Island. Cowes here reminds me of Cowes on the Isle of Wight, but ours is smaller and less royal. However the beaches are lovely and the yachting is attractive.

I've had some good times in youth hostels. I particularly remember staying in a magnificent old house on Corfu, in a couple of spectacular castles (one in Scotland and one in UK) and a terrific lighthouse in America, a couple of delightful old water mills in England. Of the modern ones.

I agree totally. The lighthouse and water mills sound like very special experiences, something you will probably never get the chance of doing the rest of your life. Ditto the Zurich Night Train, dolled up as the Train Lodge Amsterdam (thank you Train Man).