While cros­sing Central Asia, dif­ferent routes developed. Kashgar in far Western China became the new cross­roads of Asia; from here the routes again divided, heading across the Pamirs to Sam­arkand and to the south of the Caspian Sea, or to the South into India. Eventually the road reached the shores of the Caspian Sea, via Tashkent. Thus the 8,000 km long Silk Road connected Beijing to Con­stan­tin­op­le via the movement of relig­ions and products. And Tashkent emer­ged as a major trading city en route. 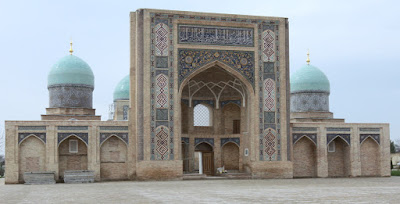 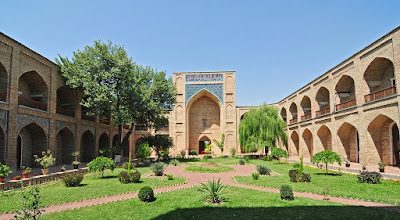 
The rise of Islam impacted on Asia, separating the East and West. The Islamic State of the Ghaznavids (962-1186) extended from Persia to India, with Lahore as the capital.

Timur/Tamerlane (1336–1405) was an Islamic Turco-Mongol conqueror. In 1390 Tamerlane ravaged Kashgar, Andijan and the intervening coun­try. Tamerlane was rec­og­nised as a great patron of art and archit­ecture, as he interacted with Muslim intellectuals. Tash­kent Mus­eum’s archit­ecture reflects the beauty of Islam, from his era on.

Babur based his ad­min­istration on the Persian model; the Persian language be­came official. The birth place of Babur was not in Tashkent but in Andijan - see his house-museum, memorial and symb­ol­ic tomb. Also note that the Univ­ers­ity and a large lib­rary of Andijan are named after him. These days many streets, parks and monuments are named after Babur in Tash­kent as well. A small Tash­kent museum presents Babur’s life and work, miniatures and gifts.

Moslems played the part of middlemen in trade. Muslim architecture became the motor of the Turkic-Persian culture and, for the first time, Islamic religious and educat­ional facilities were established en route. Tourists to Tashkent will want to see Kaffal Shashi Maus­oleum, built in Imam Square in 1542 in honour of a C10th poly­math i.e a philosopher-linguist-Sharia judge-author-poet. In the heyday of Islamic Ren­ais­sance, the world was given hundreds of wonderful scient­ists, theol­og­ians and writers. Now the build­ing is the resid­ence of the Head of Central Asia’s Islam.

Juma Mosque/Friday Mosque was built in the C15th. Af­ter the recent earth­quake, the mosque was completely renov­ated and looks modern. As 88% of Tashkent’s pop­ul­ation is Islamic and only 10% Russian Orthod­ox, mosques and Madrassas are well used.

Next door to the Friday Mosque is the city’s Kukeldash Madrassa which was built in the mid C16th by Vezir Kukeldash. With only 38 cells for students, it was tiny compared to the ones in Samarkand, Bukhara and Khiva. It was built in brick; only the façade was décor­ated with geo­metrical tilework. The original square shape with a big portal, towers and a shady inner yard that enabled the mad­r­assa to be used as a caravanserai or fortress in more modern times. Only in mid C20th was the building restored as a madrassa again.

On the other side of the Kukeldash Madrassa, Chorsu Bazaar is huge and crowded. Chorsu is the very centre of Old Tashkent where markets are held either under the blue-colored domed buildings, for clim­ate control, or in the open-air spaces. Alay Bazaar is one of the oldest bazaars of Tashkent, emerging a site on the livestock trade route. In the C19th, this space became a full-fledged bazaar and one of the most visited place for locals. This bazaar now has rows of foods and desert sellers especially Tashkent Plov, lamb stew and rice. 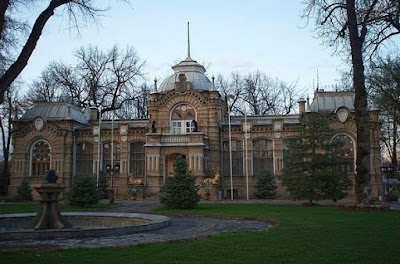 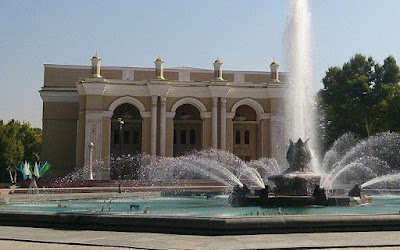 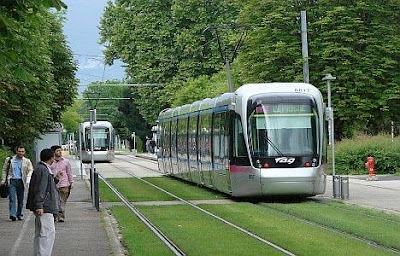 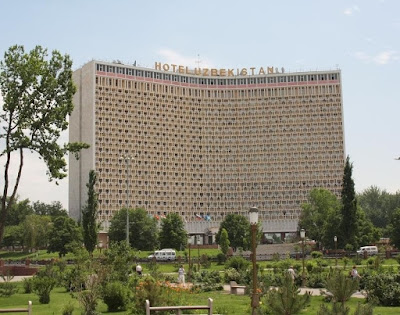 Until 1865 Tashkent was under the rule of the Central Asian Khanate of Kokand; then the Russian colonial conquest of Turkestan was com­plete. Tash­kent became Russian Turkestan’s main city!

In 1917 the Russian Revolution broke out, a terrible time for Tash­kent’s citizens, al­though at least Tashkent soon became the capital of the Turkestan Autonomous Sov­iet Soc­ialist Republic. In 1930 Tash­kent took cap­it­al city honour from Samark­and and became the green capit­al and largest city of Uzbekistan. So Tashkent has a] Uzbek, b] Imperial Russian and c] Soviet modern buildings.

As German armies sped across the Soviet Union in 1941, the Soviets embarked on a desperate attempt to safeguard its pop­ulation and industrial resources right in the middle of WW2. Soviet authorities transported people and indust­ry away from the western war fronts into the safety of the east. The Urals, Siberia, Uzbekistan, Taj­ik­is­tan and Kazak­hstan together received 16 million evacuees. With Tash­kent as the favoured dest­in­ation, this movement of desperate refugees remains the largest organised movement of civilians in hist­ory. I have a vested interest in this city - my mother’s Russian aunt and first cousin were moved to the hospitable safe-haven of Uzbek­istan during WW2 ... and survived.


The present population of Tashkent is 2.5 million people.

The city has immense buildings in the Soviet architecture style, a style associated with social, utopian ideology. After the devast­at­ing 1966 Tashkent earthquake, large-scale apart­ment blocks were quickly built to house the homeless. And grand build­ings were con­s­tructed, as well as the marvellous metro. The massive Hotel Uzbekis­tan, centrally located in Tashkent’s Amir Timur square, is a classic example of the 1970s Soviet style. This is also Cen­tral Asia’s most important political and comm­er­cial city, and trans­port­ation hub. Par­liament Building was comp­leted by 1997. The Nat­ional History Mus­eum, an impres­sive building with brilliant blue dome and ornate interior, celebrates Uzbek his­tory. And amazing gardens.

Southern China Silk Road Tour spends 3.5 days in Tashkent and Sam­arkand. Nowhere else in Central Asia is as evocative of the Silk Road as Uzbekistan. In terms of architecture and historical sights, Uzbekistan still attracts the historically-minded tourists away from other neigh­bouring countries.

I saw the train trip from Moscow to Hong Kong written up on line years ago, and was particularly interested in the Central Asian republics (Uzbekistan and Kazakhstan). All the students will remember the old silk route cities of Bukhara and Samarkand which were part of the same itinerary.

I'm glad that Tashkent was able to keep so much of its varied history. I can't say that the Hotel Uzbekis­tan is the handsomest of the lot--but that period of design wasn't always the greatest in the U.S. or other places, either--one wonders what was torn down to build that edifice.

What a surprising city. I had no idea it would be as attractive as it is.

Thank you.. I hope people go on that trip.

agreed!. Brutalist architecture tended to appear in concrete-slab housing blocks built along parallel town planning rows. We can understand why! Large scale urbanisation was urgently needed in cities like Tashkent where the population rocketed up but the income of the Central Asian republics did not. The State Museum of History and Former Palace of Arts, both in Tashkent, also look a bit concrete-ish to me.

Tashkent has preserved all the old Muslim architecture that spread culture along the silk road, as we might have expected.

But the parks are beautiful and totally un-expected eg Alisher Navoi National Park, the Japanese Gardens and the Beautiful Chimgon Mountains.

And the Tashkent Metro stations are decorated with art you may not have expected, each displaying a different theme.

All of that area and the Silk Road seem to be impossibly romantic to me. It was long unconsidered in the West but has a fabulous history.
I wonder if there is significance in the pale blue colouring on many of the buildings. I saw something similar in Tunis where blue and white seemed to be the only colour on any house.
CLICK HERE for Bazza’s effulgent Blog ‘To Discover Ice’

the blue and white really did create beautiful townscapes!

Mind you, Jodhpur in India became the Blue city and Jodhpur was a Hindu city, not Islamic.