Living in grand style on the Titanic

Built in Belfast by the British shipping company White Star Line, the three Olympic-class ocean liners were RMS Olympic (1910), RMS Titanic (1911) and HMHS Britannic (1914). For both Olympic and Titanic, the pas­s­enger accommodation was of unrivalled extent and magnific­ence, and the excellent result defies improvement. The Olympic and the Titanic could each carry 3,295 people: 2,435 passengers and a crew of 860. Travellers were separated into 3 classes: 689 in first class, 674 in second class and 1,026 in third class. 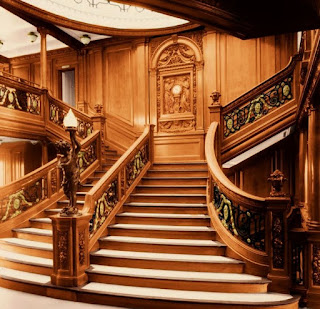 RMS Titanic had ten decks: cabins and public areas were located on the Promenade, Bridge, Shelter, Saloon, Upper, Middle and Lower Decks. The other three decks were reserved for the crew, cargo and machinery.

The first class public rooms included a dining saloon, reception room, restaurant, lounge, reading and writing room, smoking room and the veranda cafes and palm courts. During Titan­ic's design, entirely new features were added: swimming pool, Turkish baths, squash courts and a gym. The saunas were decorated in an Arabian style. For whom were these luxurious facilities intended? A complete list of all first class passengers, their ages, fares and professions, can be seen in The Encyclopaedia Titanica. 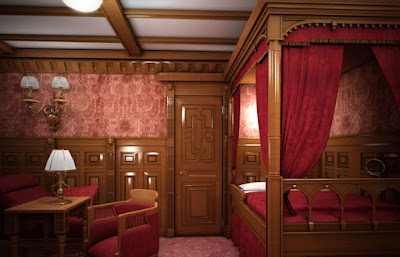 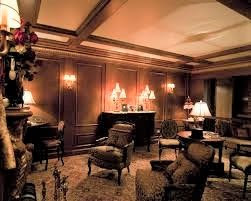 2] The First Class Reading and Writing Room was really designed for use by travelling first class women. It was painted in white and furnished very elegantly. There was a huge bow window that enabled the ladies to lookout on to the Promenade Deck. There was a large fire which burned intensely adding warmth to the room.

3] The First Class Lounge was situated on the Promenade Deck and was elaborately fitted out. This room was dedicated to reading, con­ver­sation, playing cards and other social interactions of the day. It was decorated in the French Louis XV style. The craftsmanship was exquisite. The walls were covered with elaborate wooden carving which gave the room a distinct symmetrical appearance.

4] Towards the back of the Promenade Deck was the very fine First Class Smoke Room. The walls were panelled in mahogany, carved in the Georgian style and were inlaid with mother of pearl. Above the centrepiece fireplace was a painting by Norman Wilkinson called the "Approach to the New World”. Those who required an after dinner drink could find exactly what they want­ed in the well stocked bar. Others enjoyed walking around the room looking at the painted glass windows depicting different ports from around the world, and other White Star Line ships. On the port­side of the room was a small Veranda area, which led to the Palm Court areas overlooking the aft Promenade Deck. Walled trellises with climbing plants gave the impression that the room was part of a con­ser­vatory. Passengers could sit on wicker chairs to finish their drinks.

5] The First Class Grand Staircase was GRAND. It was 60+’ from the lower landing to the glass skyline above. It had a C17th William and Mary style with solid oak carved panelling running all the way around. At the foot of the stairs was a Cherub light with a dist­inc­t­ive wood carving clock behind.

6] Behind the Grand Staircase was the spacious First Class Reception Area. It was decorated in the Jacobean style and had a white ceiling and a dark rusty colour carpet. Before dinner, saloon passengers could gather to discuss the day's activities aboard the ship. Some would sit on one of the many floral patterned Grandfather Chairs to be found there. The Reception Room led directly to the Dining Room.

7] Elite passengers certainly dined in style. The First Class Dining Room was 114’ long and spanned the full width of the ship. Seating 532 passengers at once, it was the largest dining room ever seen on a ship. The room was decorated in attractive Jacobean style, painted in peanut white and filled with luxurious and comfortable oak furn­iture. The decoration had been the result of research based on Hatton Hall in Derbyshire. 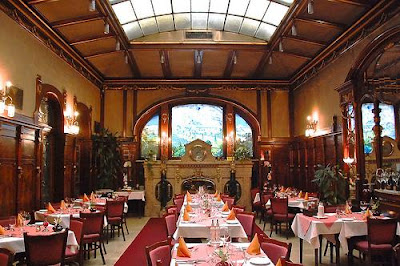 The Last Dinner on the Titanic, by Gary Fisher, found that there were only two menus recovered from the Titanic for the last night aboard. The first-class menu started with the First Course (Oysters Hors D'Oeuvres), the Second Course (Cream of Barley Soup), the Third Course (Poached Salmon with Mousseline Sauce) and continuing until the din­ers staggered through until the Tenth Course (Waldorf Pudding, Peaches in Chart­reuse Jelly, French Ice Cream Chocolate & Vanilla Eclairs). After the tenth course, fresh fruits and cheeses were available, then coffee, cigars and port.

In the last years of the Edwardian era before WWI, priv­il­eged families ate and drank freely, guaranteed to increase the waistline and to shorten the lifespan. Food was rich and fatty, and each course was accompanied by a special wine or liquor in large quantities. My feeling is that the food consumed in the first class dining room, in the short time at sea, could have fed a small African nation for a year ☹

8] The A La Carte Restaurant served the finest meals that were not included in the fares of its guests. It added an extra touch of class, since the room was decorated in Louis XIV style and had floor to ceiling panelling in French light brown walnut. Spec­ially mounted ornaments and mouldings gave a regal effect, candle-style lamps hung in the centre of the panels and silk curtains covered the large bay windows. Passengers could sit around the tables in groups of 2-8 people while an orchestra played from a raised platform.

Hello Hels, You do not explain where these photos are from--are they from the movie set? Grand as it was, I still would not like the idea of spending such a long time on any boat. (Of course, the Titanic trip was drastically cut short, but certainly that is not my meaning.) Today people use the word "cruise" as a symbol of ease and luxury, yet to go on any cruise would be a nightmare for me. Rowboats and canoes are more my style.
--Jim

One of the more interesting aspects of the Titanic exhibition at the O2 Arena in 2012 (the 100th anniversary) in Greenwich was the contrast between first, second and third class. There were lavish displays of everything from menus, crockery and cutlery to bed linen. The exhibition also showed personal belongings including toys, weapons and jewellery.
One chilling aspect was the card they handed you as you entered. It showed the name of either a passenger or crew-member and a few personal details. As you exited the exhibition there were two huge wall charts where you searched for the name on your card. One chart showed survivors and one listed all who perished. There could be a real sense of loss if your card was that of a victim.
Thanks you for your detailed description of how the wealthy travelled - before they were all rendered equal.
CLICK HERE for Bazza’s endemic Blog ‘To Discover Ice’

Last year I dined in the reclaimed dining room from the Olympic. It is located in the White Swan Hotel dining room in Alnwick.

Goodness. The rich lived well, even on a ship.

Such a waste, with all that grandeur going to the bottom of the ocean. Interesting link from Cherry Pie.

The original black and white photographs from 1911 can be seen from the Harland & Wolff collection held at the Ulster Folk & Transport Museum. They have thousands of fantastic photos, but sadly I can't remember where my coloured versions come from.

I love cruising and would happily live out my retirement on board a ship with a very large cabin. But you and my beloved might be brothers; he won't even travel the 12 hours on board the ship to northern Tasmania.

Everyone entering the Titanic exhibition in Sydney this year was also allocated an original passenger's name. I too thought it was a bit creepy, finding out if you had survived or drowned, but it did make the trip more personal.. and meaningful.

I am normally heartbroken when treasures (fittings and artworks) are auctioned off and dispersed, never to be seen intact again. But The White Swan achieved at least one great success, rebuilding the Olympic’s dining room in original shape and allowing the public to enjoy it. Thanks for the reference.

A first class ticket cost £30 (for a modest first class room) to £870 (for a grand, first class parlour suite). This was worth much more than I earn in a year :(

And don't forget, wealthy families also had to pay for their maid's and chauffeur's cabins in second class as well.

it was worth the White Star Line spending every pound they had on the three ships because they would sail _for ever_ and would be the dream home of every rich and famous person on both sides of the Atlantic. What a catastrophe, as it turned out.

yes I am with the anti cruise people I am afraid . Its not being able to get off that worries me and also the frequent outbreaks of viruses . I must say though that immigration to Australia by ship was great . It gave people a chance to learn some English and get used to the whole idea . I do have fond memories of that excursion but to do it fro pleasure I am not so sure ???

If a family was wealthy enough to sail in a first class cabin on the Titanic, they were GUARANTEED never to feel sea sick. They paid a tip to a member of the staff, and voila, the nausea disappeared.

Where did you come from by ship? I have seen photos of my husband as a little boy on the El Misr, sailing from Czechoslovakia via Marseilles in the early 1950s. He remembers nothing, but his older sister remembers the five of them sleeping in one little room.