On 11th of October each year, the United Nations celeb­rate In­ternational Day of the Girl Child, emphasising the needs and challenges that girls face. So this year I was interested in looking over my own posts on Fanny Hensel (1805–47), Felix Men­delssohn’s sister, compos­er and under-valued musical advisor. Unfort­unately I didn’t find very much.

However it did get me onto a totally different search: for Maria Anna Mozart (1751–1829) aka Nannerl, Wolf­gang Amadeus Mozart (1756-91)’s older sister. They were the children of musician and composer Leopold Mozart and Anna Maria Pertl of Salzburg.

Maria Anna was taught harpsichord by her father Leopold. So they enjoyed a great childhood, indulging their musical creat­iv­ity and creating their own musical world. In fact Leopold took the two children to tour the most cultural cities across Europe, perform­ing together as child prodigies. Acc­ord­ing to all reports, the youngsters impressed both audiences and critics.

But it was possible that the Mozart girl was really the better musician. Leopold Mozart confirmed it in writing, saying “My little girl plays the most difficult works which we have… with incredible precision and so excellently. What it all amounts to is this, that my little girl, although she is only 12 years old, is one of the most skilful players in Europe.” 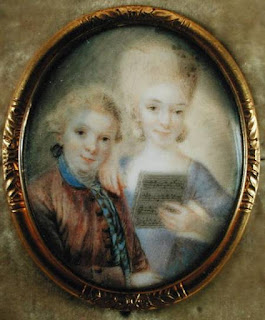 As Nannerl and Wolf­gang’s musical talents developed, her ador­ing youn­g­er brother loved her work. At a con­cert, when Wolf­gang an­n­ounced that the piece he has just played was writ­ten by his sister, Leop­old was furious. He ordered Nannerl to never comp­ose music again!

Clearly Nannerl must have composed. Note in 1762 when the two children played for aristocrats in Munich, Count Karl von Zin­zendorf wrote: “The little child from Salzburg and his sister played the harpsich­ord. The poor little fellow plays marvel­l­ously. He is a child of spirit, lively, charming. His sister’s playing is masterly, and he applauded her.” When Wolfgang was in London working on his first symphony during 1764-5, she wrote it all down and orchestrated it for him. And when she sent one of her com­pos­itions to her brother in 1770, he responded in a delight­ful let­ter, filled with admiration for her work. So why are we not familiar with the music Nannerl composed?

Note the oil painting commissioned by Leopold Mozart at Salz­burg and created by Johann Nepomuk della Croce. Wolf­gang and Nannerl were shown playing four hands on a forte-piano. Leopold had his violin and quill, showing that he was both a musician and a writer. The portrait on the wall was of the late Mrs Mozart. And the figure of Apollo represented the family’s music talents. 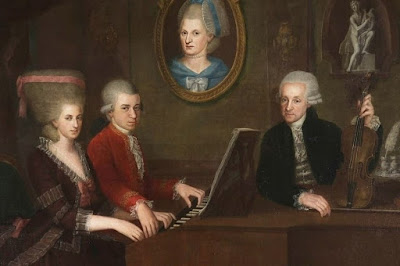 Leopold had already stopped Nannerl from touring across Eur­ope and from then on, Leopold focused all his attentions on Wolf­gang. Despite being noted as an outstanding forte pianist, her father thought it inapp­rop­riate for his daughter to have a pro­f­essional career, regardless of her talent. Leopold exp­lained that only noble women were allowed to play, unpaid, at their own dinners and cult­ural salons. Yet Nannerl had to remain at home and give piano lessons to wealthy students, to finance her brother’s Italian tour! Nannerl obeyed her father, but became very depressed.

By the time Nannerl reached marriageable age, her father vetoed her first choice of husband. So she did not marry her eventual husband, the magistrate Johann Baptist Franz von Berchtold zu Sonnenburg (1736-1801), until 1784.

Then there were huge demands on Nannerl’s energy. Berchtold’s first two wives had died and he had been left with five child­ren, whom Nannerl helped raise. Plus they had three children of their own: Leopold (born 1785), Jeanette (born 1789) and Maria Babette (born 1790).

Did Nannerl stop composing? None of her music was known to have survived, so there are three possibilities. 1] She did continue composing, but the material was lost or destroyed, 2] she did con­t­inue composing, but her works were wrongly or sneakily attributed to Wolfgang, or 3] she never composed ag­ain. All that is cert­ain is that while Wolfgang became world renowned, Nannerl did not.

New research by Australian scholar-conductor Prof Mart­in Jarvis identified Maria Anna’s musical handwriting, a disc­ov­ery that suggested she composed works used by her younger brot­her to learn piano. It has long been known that the note­book was used as a pedagog­ic­al aid by Mozart’s father, to teach Wolfgang to play piano - particularly the pieces the lad used early in his (short) career.

Nannerl and Wolfgang’s relationship was beset by years of sep­aration and the preference of their father for his son, over the needs of his daughter. Nannerl’s dreams were over, and it seemed as if her depression was deepened by the ever-growing distance from the Mozarts. The siblings wrote to each other aft­er Leopold’s death, but Wolfgang's letters to her dealt only with the formal dispos­ition of Leopold's est­ate. I am not even sure if she associated with Wolfgang’s wife Constanze Weber and their children.

When Wolfgang Mozart died in 1791, Nannerl dedicated herself to hon­our her brother by coll­ect­ing all his compositions and erect­ing monuments to him. After her husband Berchtold died in 1801, Maria Anna returned to Salzburg and supported once again by giving piano lessons! How ironic! She died in 1829, and was buried in Salzburg.

Sylvia Milo’s play The Other Mozart: the forgotten genius of Mozart’s sister, opened in 2015. Milo wrote it because she had visited Mozart’s house in Vienna and saw a painting of the two sib­l­ings together. It showed a woman sitting next to Wolfgang Mozart, clearly look­ing like his equal.

Hello Hels, It's scary to think that a talent equal to Mozart's might have been wasted and lost. I just finished reading a late 18th century novel by Susanna Rowson. Poorly written, it was a best-seller in its day. However, Rowson was an actress earning her own money, and there was no one to tell her that it was improper for women to publish. With the notable exception of Fanny Burney, most of the truly talented bluestockings of the day are now represented only by letters and snippets.

Up to the 20th century, many careers were cut off because a talented performer married and her husband did not want her to act or sing professionally any more, despite that her talent was what attracted him in the first place. Even men were not exempt from this system. Rich and aristocratic men aimed for the "gentlemen's C"; any display of talent or intellect was strongly discouraged.

What a bizarre societal value, to strive for mediocrity!
--Jim

It seems to me that many a female artiste be it painter or musician, even when generally recognised, does not seem to have the kind of profile that they deserve. Artemisia Gentileschi would be a case in point!
CLICK HERE for Bazza’s diverging from the standard Blog ‘To Discover Ice’

Fanny Mendelssohn Hensel (1805–1847) was Felix Men­delssohn's sister played the piano with great skill and was well known for her composing. I first came across Fanny Hensel when studying her aunt Fanny von Arnstein's famous cultural salon. But the fame didn't last; presumably all her compositions were later published in Felix's name.

That is true, and not just until the 20th century. But I suspect Nannerl's father, Leopold, was _particularly_ dodgy in his control over his own surviving daughter. He taught her music very well, took her on every trip across Europe and advertised her musical skills with pride.

Yet Leopold isolated his own wife in a separate home and barely saw her. And when Nannerl turned 18, she was barred from travelling or composing, and was sent to live in isolation with her mother. Wolfgang coped by rebelling against his father; Nannerl always caved in to her father's control.

good choice! Artemisia Gentileschi was my favourite woman in ALL the arts and Caravaggio my favourite male (although those honours change from decade to decade). But Artemisia's father Orazio never meant to hurt his talented daughter. Orazio even hired the best artist (Agostino Tassi) in Rome to privately tutor the teenage girl! Yet when Tassi raped her, Orazio forced his daughter to marry her rapist or any other man, given that she was no longer a virgin.

It was only when Orazio became court painter for King Charles I that Artemisia was invited by Charles to move to London as well. Thankfully she received lots of commissions.

Amazing, I had no clue there was a sister! History is an incredible thing full of holes. Thank you for sharing this. Interesting that no mention of her was in the award winning movie Amadeus either.....sibling rivalry would make a great film.

I read through the list of 110 cast members in the film Amadeus (1985), but there was no mention of Nannerl whatsoever! This gross omission has been repaired in a more recent film called Mozart's Sister (2010).