Art historians often cite rabbinical rulings against all Jewish art in the Middle Ages. But any such restrictions were limited to the geog­raph­­ic community where each ruling was given!! And in any case, they were no longer applicable by the C19th. Even better, national art schools and academies formally opened their doors to Jewish students in the C19th, in Britain, Italy, the Austro-Hungarian Empire, Romania etc.

But in my opinion, the most import­ant of all C19th Jewish art­ists was Hungarian-born Is­­idor Kaufmann (1853-1921). Young Kaufmann studied at the professional art academy of Bu­d­apest, and Vienna, for a total of 5 years. Then he married a synagogue cantor's daug­hter in 1882, and had 5 child­ren. This was a painter who knew the outside art world but who was also very much a part of the large, traditional Jew­ish community in Vien­na.

The question to ask is: could Kaufmann and these other young Jewish artists join the modern art world or would they be limited to de­p­icting religious events, Biblical characters and rabbis’ portraits? Richard Cohen in “Jewish Icons: Art and Society in Modern Europe” said that Kaufmann was less concerned than Moritz Oppenheim with encompassing the Jewish holidays, but more involved in uncov­er­ing the inner spirit of the Eastern European Jews in their daily life. I want to test Cohen’s view. 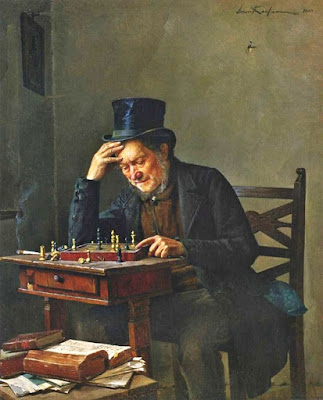 From the mid 1880s, Kaufmann began produc­ing detailed ge­n­re paint­ings i.e subjects taken from everyday life. Luckily he was an excel­lent draughts­man and colourist. There paintings were very small in size and in sub­ject mat­t­er, but then genre paint­ing has nothing going for it except for honesty and domesticity. The paintings were set in cold, bare and totally un-idyllic contexts, but with lots of pleas­ure coming from friendship, family closeness or religious studies. And the details of a family home were painted with the same meticul­ousness that we might have expected from Ver­­m­eer, con­cent­ra­ting on the archit­ect­ural detail of rooms and on the psychological auth­en­ticity of his mod­els. There was not much politicising going on here.

The Chess Player sat on a bare chair in a room of bare grey walls, his red nose, heavy coat and top hat suggesting the coldness of the space. But the cold didn’t matter. Intellectual pursuits were more important that fine furnishings: books remained open on a table, ready to be read again, once the chess strategies had been decided.

The Chess Pl­ay­ers (c1886, not shown) there were two ordinary workers, friends sit­ting down to a quiet game at home. Their clothes were a very ordinary and they apparently couldn't afford to put even a rug on the fl­oor, but the men were enjoying the contest and tak­ing it very ser­ious­ly. We assume that each chess decision was carefully considered, be­f­ore each move was made. 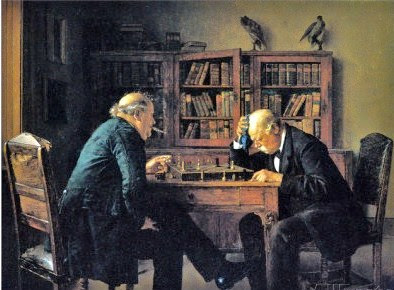 Chess Problems dealt with a similar event, but this time the two men were considerably better dressed and the room was furnished with comfort and with style. While the compos­ition of this paint­ing was similar to the composition of The Ch­ess Pl­ayers, and the attention they paid to the game was sim­ilar, were the bare headed men were not Jewish? Presumbly it would not have mattered, in Vienna's contemporary world. 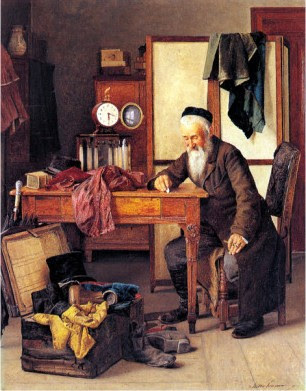 In Two Pairs of Shoes, an elderly Jewish man was shown assessing his stock from the table top where he sat. Perhaps business was going well enough; there seemed to have been a quiet smile on his face, and a satisfying cigaret­te in his hand. Clothes and shoes were heaped everywh­ere, in the suit case, on top of the table and over the screen. Note the det­ailed attention paid to the books, clock and vase in the back of the room. 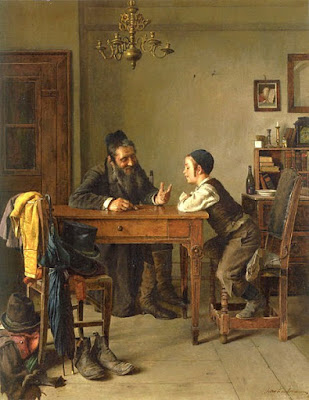 Commercial Instruction used a title similar to Business Secret but was more tender. Using virtually the same furn­i­t­ure and lights as The Rabbi's Visit, this painting told the story of a religious father and son spending time together. However instead of bonding over religious studies, this father was teaching his son about business. The lesson must have been appealing because the little boy was fascinated. 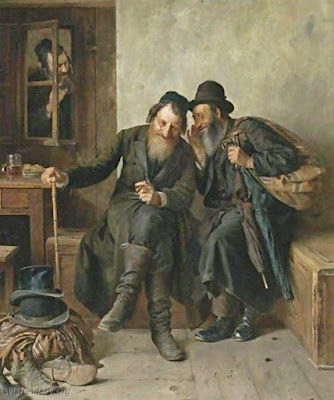 In Isidor Kaufmann by G Tobias Natter (1995) I found eleven small, wonderful genre scenes painted in 1884-95. Two Pairs of Shoes, The Chess Players, No Fool Like An Old Fool, Chess Pro­blems, Rabbi's Visit, Business Secret, Com­merc­ial Inst­r­uct­ion, A Business Transaction etc were all pain­ted in the corner of a lounge room, usually with one or two fig­ures. In this short per­iod, Kauf­mann st­ruck a gold mine, as it were. He creat­ed detailed, finished and pain­terly works, about small issues. Pl­easure, religious or secular, was depic­ted.

Business Secret showed two poorly dressed men talking conf­identially about secondhand items for sale. A third man poked his head through the window, possibly eaves­dropping on the deal. By stres­sing the shabby hawk­ers with blatantly Jewish features, Natter suggested this painting verged on the cartoonish. But I think it was painted very much in the same tender vein as the others.

Consider the many C19th Jewish artists who operated outside both old Rabbinic tradition and stark, secular modernism. In the suddenly mobile, changing world of the latter C19th, how could Jewish artists come to terms with their own identities and approach the task of represent­ation? Appropriately The Emergence of Jewish Artists in C19th Europe, at Jewish Museum NY 2001, presented 21 painters who offered radically different responses to this complex question. The book by the same name (Susan Tumarkian Goodman ed, Merrell NY, 2001) is excellent.

Richard McBee suggested Jewish artists like Kaufmann were able to address a broad public for the first time; they were interested in representing Jewish life and showing it to be on a par with Chris­tian life. Their art documenting everyday life was shaped by the community and changed by modernity, so it had to do a balancing act between emancipation and assimilation. Kauf­mann reminded the modern viewer that Jewish art acquired a changing and vital importance as an aspect of cultural iden­t­ity. 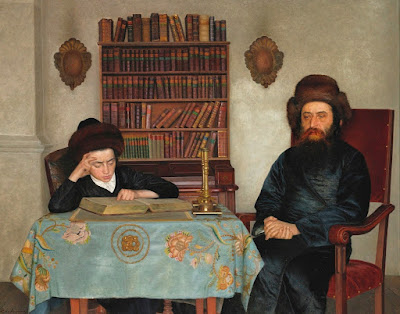 
Then something changed for Kaufmann. Viennese genre scen­es no longer satisfied the need to discover his vibrant Jew­ish roots. In the later 1890s, he chose to go in search of mat­erial in Jewish towns across the Austro-Hun­g­ar­ian Em­pire and Po­land. He travelled every summer and returned to his Vienna studio to turn the sketches into completed paintings.

A work from this later era was Rabbi with A Young Student. Kaufmann reflected the pride he felt for the traditional religious life. The teacher displayed a sense of solemnity and perhaps wisdom. The young student was caught in a moment of rapt attention, his eyes focused on the text before him. Learning was clearly the hallmark of traditional Jewish life. The walls were plain but the book case was handsome, filled with beautiful leather bound volumes.

Moritz Daniel Oppenheim, the painter of the Rothschilds, was the first Jewish painter of the modern era. This powerful documentary explores the seminal artist’s traces - and lingering impact - across Germany, France and Israel.

It is important to have quality documentaries about 19th century artists in film festivals. And I am very impressed that the film's director came to present questions and answers after the film.

I really like genre painting and I particularly enjoy the almost hyper-realism seen here. I am sure that the parallel developing importance of photography (pun not intended!) had an influence on this kind of style. Paradoxically the detailed works works remind me of some pre-Raphael work - and they despised genre painting!
CLICK HERE for Bazza’s capricious Blog ‘To Discover Ice’

Hello Hels, Thank you for this introduction to Isidore Kaufmann, although the name does seem somehow familiar. Although genre scenes are generally sentimental, Kaufmann avoids overdoing the sentiment to a cloying degree. And of course genre paintings are a visual feast for object historians!
--Jim

Except for the Netherlands in the 17th century, there were usually only three respectable schools of art work
1. Historical and religious events
2. Landscapes and
3. Portraits of important individuals or families

4. Genre/domestic scenes and 5. Still life painting were considered less classical, requiring less talent and harder to sell to important patrons. So I think Kaufmann was taking a risk, although less of a risk than domestic scene artists from before the mid 19th century.

Because history, religious and royal themes in art and in written chronicles usually concentrated on the upper classes, you are right about genre paintings being a treasure trove for historians of the working classes and of rural families. The chairs, tables and libraries in Kaufmann's paintings may well have been used more than once, but the room design, clothes, books, wall and floor decoration (or lack of it) tell us more than most other artists.

Many thanks. I love interior designs, but no advertising please.

InteriorSolution said...
This comment has been removed by a blog administrator.
November 07, 2017 10:27 pm

I am glad you enjoyed the post, but no advertising please

I am glad you enjoyed the post, but no advertising please

Kaufmann's interiors were wonderful. He was an excellent colourist and meticulously detailed. Even though the houses he depicted were often very basic.