The Arts Club was founded in 1863 to provide a haven for people who had professional or non-professional links to the Arts, Literature or Sciences. According to the club’s own home page, a small group of friends including Dickens and Trollope got together and drew in new members like Tennyson, Monet, Manet, Rodin and Winston Churchill soon after. In 1896, the Club relocated from its original home on Hanover Square to its present elegant C18th townhouse at 40 Dover St, offering its members a comfortable, arty and impressive base in Mayfair. In the basement, there is a live music club room and there is a contemporary art collection that looks like a professional gallery.

Since then, the Club gave membership to many outstanding figures in the history of art, literature and science: writers like Charles Dickens and Wilkie Collins; mus­icians like Franz Liszt; and artists Frederic Leighton, Walter Sick­ert, John Everett Millais, Auguste Rodin and James Mc­Neill Whistler, as well as famous professionals. The Arts Club sur­vived two world wars, despite a direct hit during the 1940 Blitz.

In Sep 2011, the Arts Club was renovated and re-launched. The curr­ent mem­bers are involved in art, architecture, fashion, film, music, literature, perf­orm­ance, photography, science and theatre. It proud­ly contin­ues to be a hub for creative and entrepren­eurial patrons to come together to dine and participate in the events; thus the Club has reclaimed its central place in London’s modern cultural life. 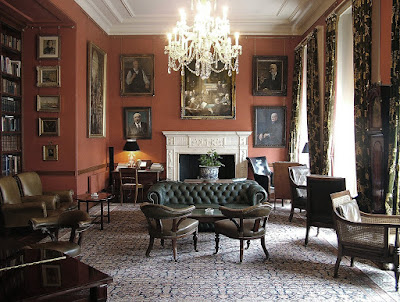 The Arts Club’s collection includes the permanent display of works by three modern artists, alongside the Club's historic coll­ection of British/internat­ional artists and temporary exhibitions. And to show that there is more to the Arts Club than drinking oneself to a standstill, there are regular lectures and recitals.


London’s other private members’ clubs continued with expan­sion. After WW2, clubs were still filled with the arts, but had to be louder, more hip and more sexy. Annabel's was founded in 1963 by entrep­ren­eur Mark Birley, the very educated son of the artist Sir Oswald Birley, favourite portrait painter of the royal family. Mark Birley had worked for Hermes, the luxury goods maker. When his friend John Aspinall turned a large Palladian house into the Cler­mont Club Casino, he offered Birley the lease on the base­ment. Ap­parently they needed somewhere to party, after an evening's gambling.

Birley turned the basement of the Clermont Club Casino into a nightclub and blocked off the private staircase going up into the Clermont above. Since 1963, this intimate Berk­eley Square basement has attracted a gilded, glitt­ering clientele and aristo­crats. Named after Birley’s glamorous wife, now Lady Annabel Goldsmith, the club proudly declared it was a safe haven from journalists.

Parts of this elegant and exclusive Mayfair site had a sumptuous interior: vaulted Moorish ceiling, pillars covered with antiqued brass and outstanding coll­ection of objets d’art. Each year there was a week of fashion shows, de­vised by the later fashion designer Alexander McQueen.

Pavel Tchelitchew was the Russian-born surrealist painter, set designer and costume designer. Tchelitchew was born to a noble landed family, a man who left Russia for Berlin and then Paris in the 1920. Tchelitchew’s watercolours were perfect for two reasons. Firstly Birley was fascinated with Russian ballet. And secondly Tchelitchew was close with Gertrude Stein and the Sitwells.

Posh yes, but Birley wanted to create some space that had the feel of an English country house. The room and bars and the little nooks were furnished with comfortable sofas, a large Buddha, soft armchairs and a wide range of art: oil paintings of Birley’s dogs next to works by Augustus John.

Against this contemporary club backdrop, some of the older clubs in London that once serviced the wealthy and the glamorous have been getting a bit dusty, banking on exclusivity. Even Annabel’s also had another look at itself. In June 2007, after more than a year of negotiations, the clothing businessman/Ivy Restaurant owner Richard Caring bought Mark Birley’s valuable trio of Mayfair hangouts – Annabel’s, Harry’s Bar and Mark’s Club.

Annabel's could now modernise, largely thanks to Guillaume Glipa, executive director of The Birley Group. Annabel’s was moved to a spect­acular Grade I-listed Georgian town­house at 46 Berkeley Square, just two doors from its current site in Berkeley Square. The new club was designed by Martin Brud­nizki, who was also respons­ible for the makeover of The Ivy.

The new Annabel's has taken over 4 floors and will be offering three restaurants, two private dining rooms, six bars and a nightclub in the basement. New designs for the club include a £4 million retractable glass roof over a hidden garden-dining ter­race behind Berkeley Square seating 100 people. There will be a barber’s in the men’s room, with mother-of-pearl doors, a cigar shop and a wine shop. The 1963 club and restaurant is being turned into a health and wellbeing spa. The day club will be open from 7am to 4am. 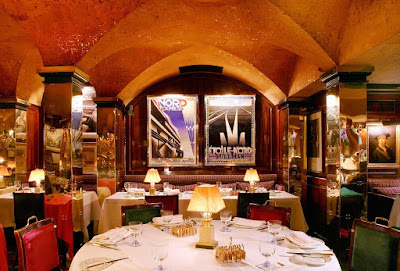 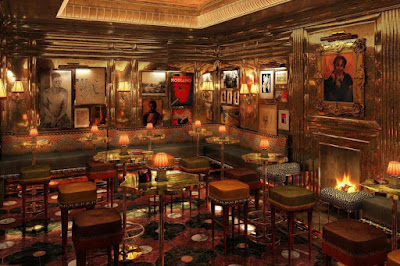 Annabel's mirrored room in the basement

A bar at Annabel's 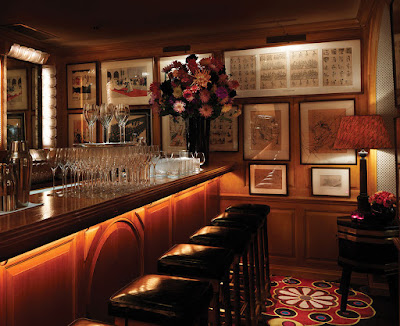 The Evening Standard has been inside. Annabel’s com­m­issioned the best craftsmen, design­ers and art­isans to use the most beautiful colours, textiles, materials and objects. The original Nina Campbell inter­iors have been updated for the C21st, while retaining Annabel’s trademark dusky mood. Note the hand-pleated crimson silk walling fabric and paisley-print carpets in the Indian Room.

When this smart townhouse venue re-opens in Nov 2017, Berkeley Square will never have been so hot.

It is not with any envy that I remark, how the other half live.

Berkeley Square has never been hot. Exclusive, elitist, aloof, home to Rolls-Royce franchises and well-posh but never 'hot'! There is a strong connection with Otto Schiff, a very modest Jewish philanthropist. I think it's just right for Annabelles......
CLICK HERE for Bazza’s voluble Blog ‘To Discover Ice’

I would join the Arts Club still, but I imagine the fees are not cheap.

Another world... I seem to remember a glitzy disco called Annabel's when I went to university, but frankly I preferred an evening in the pub...

It is how the other 5% live! Yes there is snootiness and elitism, but there is no reason why we ordinary people shouldn't spend time in lovely social environments with all the cultural facilities built in.

The Evening Standard wrote something similar a couple of months ago. Berkeley Square, where two bedroom flats fetch £3 million and where Winston Churchill once lived, also hosts annual art and antiques fairs. It was till recently home to the End of Summer Ball. Local residents have seen the open spaces engulfed with commercial activity, contrary to the London Squares Act, but now they are fighting back.

of course you did! Every uni student I went out with in my entire undergrad and post grad career was male, a bit poorly dressed, impoverished and interested largely in getting laid. However it was the middle of the Vietnam War, so if uni students had been conscripted (or even if they hadn't), the pub was the most welcome place to spend evenings.

Adding a health and well being spa is an essential element.

Annabel's managers are going for a very well heeled, very well connected client list, much more likely to be middle aged than 18 year olds. So I agree - health facilities will be very welcome.

baaaa it really is disgusting . I guess its no different to how its ever been but really ! All that money on a retractable roof !! Bring on the revolution I say !

Do not hold your breath, waiting for the revolution. The difference between the Haves and the Have Nots is greater than ever before :(

Social clubs were always private, but now schools, hospitals, trams and energy suppliers are going that way too.

Hello Hels, The Arts Club looks elegant, but Annabel's is a bit of visual overkill--it hurt my eyes trying to concentrate on the photos. Cleveland has similar ventures, but as in London, a price tag is attached.
--Jim

It's always interesting to see how "the other half" lives. Even if I had a ton of disposable cash, (which I don't...) and I were a famous artist or celebrity, (again... which I'm not) I wouldn't want to join any kind of exclusive club. Visit once to "ooh" and "ah", maybe, but I'd be the proverbial square peg in a round hole.

spot on. Each room is supposed to evoke separation from the rough world outside (including journalists), literature, foreign travel, art, culture, great food and refined glamour.

Far from the quiet feel of an English country house lounge room!

it reminds me of exclusive and much coveted membership of the Melbourne Cricket Club which currently has 230,000+ people on the waiting list. When a baby boy was born into a wealthy family, a much loved present was to place the baby's name on the waiting list so that by the time he was 21, he could go straight in as a member.

At the moment, waiting list candidates nominated back in 1999 will shortly be offered provisional membership. Now THAT is what I call exclusive.

I am proud to say that all of my boys who were on the list fro the MCG ( placed there by an elderly friend of the family when they were born) Have turned it down as its become available . Not their scene . So 3 more aspirants can achieve this great social achievement !!!

my family were the wrong income level, wrong social class and wrong religious community to join a private club - and they were faithful members of the Labour Party. But you should be very proud of your sons since they COULD have joined the MCG but elected not to... on principle.