After thwarting the Turkish attack at Romani in Aug 1916 the Australian Light Horse brigades advanced with victories at Rafa, but were twice beaten at Gaza. There followed plans to capture Beer­sheba, which would allow for another attempt at Gaza.

Today (31st October) the Australian Light Horse and New Zealand Mounted Rif­les were engaged in a battle that was the ANZACs' greatest charge ever.  The Auckland Mounted Rifles captured Tel el Saba from the Turks, a key to taking the outpost township of Beersheba. And today was the last great mount­ed charge by the 12th Light Horse Regiment of the Aust­ralian Imperial Force. Capturing Beersheba in 1917 was the turning point in the British campaign to ex­p­el the remnants of the Turkish Ottoman Empire.

The Light Horse troopers horses were the famous Walers, mostly bred in the Hunter Valley. And most of the men were farming lads from the country, including from the Boorowa area of NSW. 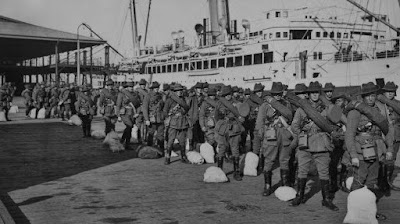 Now for the centenary celebrations in Beersheba, let us add a smaller, but significant element to this history. Caroline Overington has written in detail about Albert Tibby Cotter (1883-1917) , the youngest of six sporting sons born to Scottish immigrant parents. His was not a poor family: they lived in a two-storey, solid brick mansion with its own stab­les, in the Sydney suburb of Glebe. The Cotter boys played cricket, rugby and boxing, and all attended Forrest Lodge public school. Then Tibby went to Sydney Grammar, where he played school­boy cricket.


Tibby made his cricketing debut for NSW in 1901 at 18, and his Test debut against England at the end of the 1903-04 series. In his second Test, at the MCG, he starred. Cotter’s bowling style was fast and powerful; often he shattered the stumps, which teammates would then hold aloft, symbols of his power. During his first match in England in 1905, after he struck the legendary WG Grace a painful blow with his first full toss, England demanded that he stop bowling at the body, and Cotter’s fame was assured. His face was soon on the cover of newspapers throughout the British Empire. 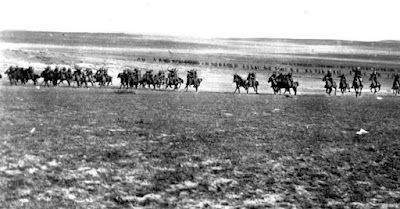 Thunder of a light horse charge' as the cavalry rides towards Beersheba,
Oct 1917

Cotter loved the limelight! A week before the 1907 Ashes began, he was arrested in Brisbane for being drunk in public, but bailed in time to open the Australian bowling. At the SCG in Dec 1907, his match-winning performance had the crowd stomping the boards in appreciation. In a nine-year international career, Cotter played 21 Tests, taking 89 wickets at an average of 28.6 runs.

When WWI broke out in 1914 Cotter was already 31 years old and work­ing as a clerk. He rushed to enlist, joining the AIF in April 1915. Despite having no great riding ability, Cotter was accepted into the 1st Australian Light Horse Regiment, serving as a stretcher bearer alongside fellow soldiers with vastly more skill (some were former stockmen, many of them Aboriginal; some were horse-breakers from NSW pastoral stations). He served at Gallipoli during the final stages of the campaign and upon his regiment’s return to Cairo, he was disciplined for being two weeks absent without leave.

Later he transferred to the 12th Light Horse, where he was commended for his fine work under heavy fire during the second battle of Gaza. Cotter was promoted to lance corporal, but at his own request rev­ert­ed to the rank of trooper. He was part of the now famous Aust­ral­ian cricket team that played in slouch hats against an English side in the Palestinian desert in 1917. At the Australian War Memorial in Canberra, there is a photo of Australian soldiers taking part in a cricket match on an improvised pitch in the Sinai. 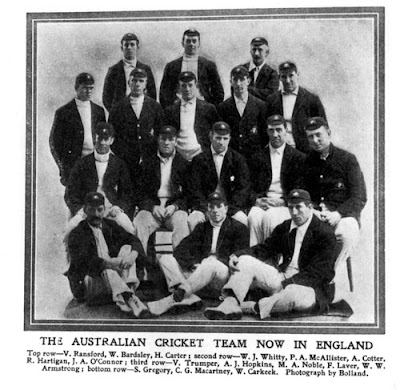 Australian National Cricket Team, 1909
Tibby Cotter, leading wicket-taker in the series. was at right end of the second row

In the last cricket game he played, Cotter told a fellow soldier-cricketer that he did not think he would survive the war. On 31st Oct 1917, the 4th Light Horse Brigade captured Beersheba in a cavalry-style charge. Aust­ralian soldiers tore across the desert, and jumped over the Turkish trenches, cap­turing the town and its wells, and winning a decisive victory for the Allies.

Cotter was among a handful of Australians that did not survive the battle. The story commonly told was that Cotter was shot by a sniper as he peeked up over a trench. But the Australians were not in the trench­es. Or as a stretcher bearer, was he killed by a Turk who had not been disarmed? Or did he jump straight into the battle with the charging soldiers, and got hit?

The death of this interesting character sent the nation into mourn­ing and while he was the only Australian Test cricketer to die in WW1, many other international sports stars did. The names of the dead had filled column after column in the news­papers, for years. But Cotter's name stood out - he was hugely admired across the British Empire and was mourned by millions.

Cotter was 34 when he died and his family was informed. They also had to grieve for Cotter’s older brother, Private John Cotter, who had been killed serving in the infantry in Belgium (weeks earlier in Oct 1917). Cotter’s remains were buried near where he fell, in Beer­sheba.

Recently his life has barely been celeb­rated, something that may change with today’s cent­enary of that great charge. The prime ministers of  Israel, Australia and New Zealand and other dignitaries are participating in the Beersheba Centenary. 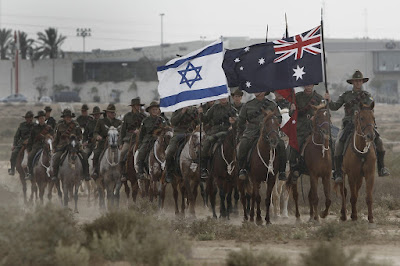 Australian horsemen commemorating the centenary of the Australian soldiers
1917-2017.

Hello Hels, Having just finished one of Paul Fussell's books about the ineptitude and horrors of WWII, it is interesting to balance this with the accounts of the intrepidity of soldiers such as those who captured Beersheba. It seems that Cotter lived his life to the fullest, and no wonder he was so admired and mourned.
--Jim

The war in Europe must have seemed very remote to those country boys. Their willingness to rush to the aid of the mother country (even by the Irish) seems remarkable.
The story about Tibby Cotter being bailed to play in a Test March resonates today with the story of Ben Stokes being delayed for selection for the Ashes Tour after a drunken night-club brawl. It turns out he was defending two gay men who were suffering homophobic abuse. It turns out that there are heroes.......and heroes.
CLICK HERE for Bazza’s equanimous Blog ‘To Discover Ice’

thank you for the Recommended Article.

Politicians and dignitaries from Australia and New Zealand were a very welcome sight at the 100th anniversary of the 1917 battle for Beersheba. But having the Head of State from New Zealand was absolutely the right person to lead the national delegation.

I think that Gallipoli had been such a catastrophe between Feb 1915 and Jan 1916 that the Australians and New Zealand soldiers were beyond keen to capture Beersheba and show their military worth. It was also the first battle where the ANZACs fought under an Australian general, rather than a British general.

Mind you, Beersheba could have been a catastrophe as well. The Turks and Germans in the trenches had machine guns that were not aiming at the right angle; the Australians on their charging horses had rifles and loud yells :(

otherwise-unknown country lads who had never even visited the Big Smoke, travelling to the other side of the world for King and Country! Amazing!

I read the Ben Stokes story and felt heartbroken that gay couples are still being attacked in public for their lifestyle choices. Stokes may have handled it badly, but he was a very brave man. By the way, red heads are gorgeous :)

you are right! The morality of using violence to achieve political or even military aims is both dubious and often inept. I was thinking about that in Catalonia... will the central Spanish army round up all the pro-independent Catalans into prisons? execute them for treason? send the Catalan government into exile? Not the way to make Catalans love being Spanish, I would say.

Seems to me that Tibby would still be making headlines now if he was a young man now . He would probably be a rugby or AFL player and be up on charges of doing stupid inconsiderate things . Young men have always been a bit mad .

"stupid inconsiderate things" ..yes! I had only brothers, sons and heaps of male first cousins. Not a girl in sight :( I NEVER understood why teenage boys drove too fast, drank too much, thought with the organ below their belt, loved rough sports and didn't study for exams.

Presumably nothing has changed since WW1.

one of the many idiot 'presenters' on Australian TV called it "The Charge Of The Light Brigade" in error.
Preparing for a Remembrance Day presentation I have been deep in WW1 all week. so sad are the individual stories I can't bear it.
"delivering food to the front line in a horse limber, RSG was shot in the head. He calmed his horses and delivered the food before seeking help"
One of my studies was a doctor who earned a DSO, his 2 brothers also doctors also saw active duty WW1.
I just scanned/printed a letter to army admin from a mother whose boy had been killed on Gallipoli: said she did "not give permission because he was just 18 and his brother was already there"

My grandfather was MID, his Light Horse brother was Military Medal, and they both got home with their 2 other brothers who served. All 4, and 89 others taken out of a small remote farming community, now even smaller with the remains of all the same families as then.
100 years, plus ca change.
Thanks for the great story of the cricketer, you always Value Add your topics for us dear hels.

I am so glad you are familiar with the WW1 stories, through your grandfather and 3 brothers. If I was their mother, I would have stopped them going, but clearly the very brave young men in your family wanted to Do Their Bit.

My grandfather was a translator between the Russian, British and Australian armies in both Egypt and Palestine in 1916-7, speaking Russian Yiddish Polish German English and Hebrew. Nonetheless he still got a bullet in the kidney and lived the rest of his life with one functioning kidney.

My travel agent son organised a major gathering of Australians in Beersheba and referred me to J-Wire (16th Nov). One of the participants laid a wreath in honour of Indigenous Soldiers of the Australian Light Horse, for the first time in 100 years. Three of the 12 indigenous participants rode in the re-enactment of the Charge in full Light Horse Uniform. One of the participants was able to visit the grave of his Great Uncle at the Beersheba War Cemetery, the first one in his family to do so.