I have never been to Romchamp and didn't know that Le Corbusier designed a 1950s chapel. But I was eavedropping on two Francophiles in a Melbourne espresso bar, and after buying them a cheesecake each, got the following brilliant blog post. Many thanks sisters, for your passion and for your European Traveler article by Henk Bekker.


Ronchamp (pop 3000) is in the French region Franche-Comté, 418 ks SE from Paris, on the Swiss border near Belmont. In 1950, Swiss/French architect Le Corbusier (1887-1965) was comm­is­s­ioned to design a new Catholic church in 1950. He initially declined the invitation, but apparently became inspired by the site on a hill top that offered views in all four directions. Like the orig­in­al stone C4th pilgrimage chapel that was bombed during WW2, Chap­el­le Notre Dame du Haut de Ron­champ was to sit among a wooded terr­ain, 150m above the rest of the village. 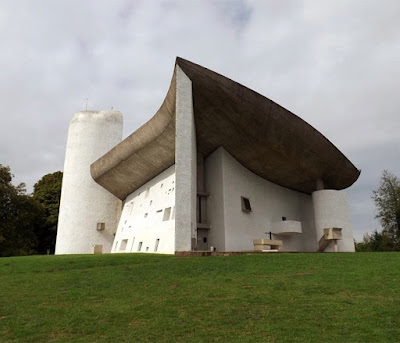 When Corbusier agreed to design Ron­champ, it had to be mod­ern, not just in its mat­er­ials and designs, but because it would fun­ction as a religious scul­p­ture. The Church leadership wanted to get rid of the chapel’s old decadence and ornament­ by embracing mod­ern art and arch­it­ect­ure. The chapel needed to be rebuilt as a med­itative and reflect­ive space void; spatial and relig­ious purity thus became one of Corbusier’s main focuses.

The walls were mostly stark, whitewashed concrete, because restricted access required most of the structure to be produced onsite. Stones from the former church were used in the construction. Up to 2.7m thick, the southern wall was pierced by 27 windows of various sizes in glass. These window frames were like small tunnels that allowed soft light to be reflect­ed at a variety of angles throughout the day. There was no connection to stained glass; Le Corbusier considered that this form of illumination was too closely bound to old, Romanesque and Gothic architectural notions.

The curving walls acted as a practical method of sup­p­orting the concrete and masonry construction, as well as the mass­ive curvi­linear mushroom roof which appeared to peel up to the heavens. The curve of a massive grey roof of the chapel seemed to be a mirror of the curve that the chapel sat on. It rested on embedded pillars hidden in the walls, rather than on the walls themselves, giving the imp­ression of the roof floating 10cm in the air. The cler­es­tory windows, fitted between the top of the walls and roof, helped provide the interior with more light.

The Le Corbusier-designed chapel was consec­rated in 1955. It had an interior space for one altar, three chapels and c200 worshippers. The concave eastern wall had a second outdoor altar which allowed services for 1000 outdoor worshippers.

As today's visitors always note, the light enters into the chapel where it appears inside as a washed-out, ethereal atmosphere. The effect of the light evokes emotional qualities that create height­ened sensations in tune with the religious activities. We know Corbusier designed small punct­uring apertures on the façade that amplified the interior light by tapering the window well in the wall cavity. Each wall became illuminated by these differing window frames, which in conjunction with the stark white washed walls, still gives the walls lum­inous qual­ities punct­uated by a more intense direct light. 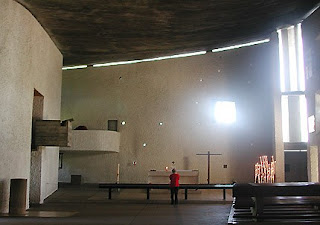 Above the plain altar, the east wall has several pinhole-windows and one substantial window with the Madonna and Child in silhouette. 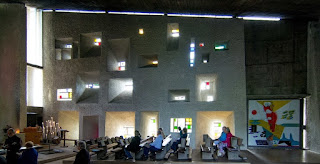 Lunimous light coming  over the pews from 27 differently angled windows

On the wall behind the altar in the chapel, the lighting effects create a speckled, starry pattern. And there is a larger opening above the cross that emits a flood of light, creating a powerful religious and emotional exper­ience.

The church has three towers of between 20 and 27 m high. These provide space for the side altars inside the church and are lit through wind­ows fitted below the cement canopies. The chapel has no bells. The light is what gives meaning to the chapel.

Chapelle Notre Dame du Haut de Ronchamp's interior has very limited décor­at­ions. The main nave is 25 x 13 m with the floor fol­l­owing the nat­ur­al uneven slope of the hill towards the main altar. Eight rows of wooden benches were added at the insistence of the church authorities – Le Corbusier would have preferred worship­pers to remain standing. Clearly this design was not typical of Le Corbus­ier’s rational, rather boxy funct­ionalism; instead it was to be an early postmodern design in a sculptural style, a modern response to a religious site. Still maintaining Le Corbusier’s principles of pur­­ity and openness, this is one of the most instantly recognisable designs of the mid C20th.

The whitewashed concrete post-modern Chapelle Notre Dame du Haut is still a popular site for religious pilgrims and architecture lovers. The large enamelled door in this wall is used only for special pilg­rimage events such as Assumption of Mary Aug 15th and Nativity of the Virgin Mary Sept 8th. Three thick white walls curl inwards from the outside to create smaller chapels at the sides of the main space. Two sit on either side of the north entrance and one in the south-east corner next to the main entrance.

Ron­champ has been on UNESCO's World Heritage List since 2016. The Le Corbusier chapel is privately owned and thus one of few places of Christian worship in France that charges admission fees. Buy guidebooks in the bookshop. 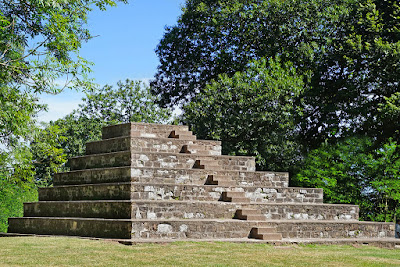 See the small Pyramid of Peace designed by Le Corbusier and mostly constructed from rubble from the previous church. It is a mem­orial to the soldiers who died during the liberation of Ronchamp in September 1944. 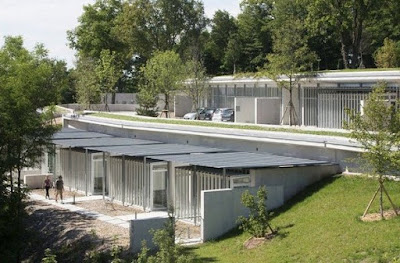 Le Corbusier designed a much more lumpen and concrete-based church in Firminy (central South France) than he did in Ronchamp. Ronchamp was more modern, luminous and welcoming.

Hello Hels, I love the effect of the outside wall punctured with all those windows. Was the colored glass (visible on the inside) added later? The only part I am not crazy about is the roof, which looks rather thick and top-heavy.
--Jim

I have not previously been attracted to the work of Le Corbusier but this is an absolute delight. It's surprising that the former chapel was war-damaged; it doesn't seem to be in a strategic location as far as I can see.
The angled windows are a feature of architectural genius!
CLICK HERE for Bazza’s mannered Blog ‘To Discover Ice’

While I have heard of Le Corbusier and his work, I knew little. I think the chapel is terrific. It's like nothing I have ever seen.

I have never visited Firminy in person, but as soon as you mentioned it, I immediately had a look at the photos. Le Corbusier said that Firminy was a mining and industrial town with a small religious congregation, so he wanted to celebrate the miners and steel workers that produced most of the goods of the area. Thus the choice of concrete, which would also give him control over the volume and spaces, and would give light a true meaning.

When you visited, did you think Le Corbusier achieved his goals?

I am assuming that because Le Corbusier lived to see the completion of the Ronchamp Chapel, that no changes were made after his death. Unlike Firminy, for example, which wasn't completed for 40 years after the architect's death. [Mind you, recent vandalism and natural decay at Ronchamp may change all that].

The roof is an interesting architectural question. The chapel's thick masonry walls and irregular window placements were somewhat different from Le Corbusier's earlier buildings, but by themselves, they would not have stood out. I think he wanted a massive curved roof to stand out, a bit like sculpture in the landscape.

the angled windows are indeed features of design genius. Every window is unique! The openings slant towards their centres at different angles, so the light filters into the nave at different angles. And windows were punched through the wall in different sizes and with irregular spacing. Le Corbusier did not want vast medieval, religious stained glass, but he did want some of the windows to decorated with small pieces of jewel-like colours.

because I was giving heaps of lectures about Bauhaus Academy of Arts and Design years ago, I thought I was familiar with ALL of Le Corbusier's architectural preferences eg see Le "Corbusier's architectural masterpieces" and "Le Corbusier and the Bauhaus". But they were in the 1920s and 1930s. His churches were very different, either because they were designed decades later or because they were religious institutions and needed different thinking.

Thank you for the reference to "Sacred Concrete: The Churches of Le Corbusier Hardcover" Mar 2013 by Flora Samuel. Contact Amazon for shipping details and reviews.

I am hoping to find a copy of the book in State and University libraries here.

I also for the first time read about this chapel in http://mypaperservices.com/author/root/ I liked how much they qualitatively describe that era

Many thanks. I have plenty of journal articles on Le Corbusier's early career, but I am struggling a bit with his post WW2 career.

This chapel probably has no analogues in the whole world, because it is a sample of modern art, which is built just superb.