The Jacobites, supporters of King James II, were the original opponents of the Glorious Revolution of 1688. The Act of Union in 1707 had led to the creation of Great Britain, with a single parliament at West­min­ster. Scotland did not adapt easily to this new relationship because, for many Scots, the union delivered misery and economic disadvantage. So half the nation want­ed to return to the independence of Stuart Scotland.

For landed and business-minded Scots who had increased access to a new British trading empire, the Union was loved. And Presbyterian Scots, who were still fearful of popery, certainly did not want to see another Stuart king in Scotland.

The Stuarts’ main strongholds remained in the Scottish Highlands and Islands. By the early C18th the Highlanders were not the only people looking to overthrow the British government; unhappy citizens on both sides of the border, including persecuted Irish Catholics and unhappy English Tories, shared the goal. And the Jacobite cause received support from France, Spain, Sweden, the Papacy and Russia, all of whom wanted to weaken the British government.

Charles Edward Stuart aka Bonnie Prince Charlie (1720-88) was born in Rome, where his family had been living in exile. He was the grand­son of the deposed Catholic King James II who’d escaped the Protestant William of Orange's takeover in 1688. James’ grand­son soon became the popular focus of the Jacobite cause. However to the British government, the Young Pretender was just another rebel insurgent.

In 1745, Charles left France for the Scottish Highlands to enlist the clans in rebellion against the proper Hanoverian British King George II. Charles’ plan was to make his father, James Francis Edward (1688–1766), the British king.

At first the few clan chiefs Charles contacted showed little inter­est in the Stuarts. But the social structure of the Highland clans allowed him to raise a sizable body of men. At first the Stuart campaign went well. After the capt­ure of Edinburgh and assuring his forces that support was on its way from France, Charles marched south. They defeated the British gov­ernment’s army in East Lothian, then crossed into England and successfully laid siege to Carlisle then Derby. The “invaders” caused great anxiety in the south.

Once it became clear that no help was coming from France, Charles retreat­ed to Scotland. After several more battles, in Ap 1646 they fought at Culloden Moor, near Inver­ness. The Duke of Cumberland’s 9,000-strong force immediately destr­oyed the Jacobite army of 5,000 Highlanders. 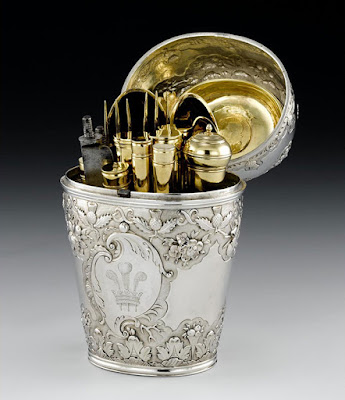 After the Rebellion, the Hanoverian British government decided to permanently end the Jacobite threat. Many Jacobites were imprisoned or executed; estates were forfeited, the clan system dis­mantled; weaponry, traditional dress and bagpipes were out­lawed. The powers that had underpinned the authority of clan chiefs over their clansmen were abolished. Charles survived the Battle of Culloden but became a fugitive for five months. He eventually escaped to France and never set foot in Scotland again.

Once Bonnie Prince Charlie was permanently gone, the Jacobite cause quickly became a nostalgic theme, expressed through poetry and song, especially in Scotland.

The National Museum of Scotland in Edinburgh has a large exhibition from May-Nov 2017. The Bonnie Prince Charlie and the Jacobites Exhibition includes 300+ objects, plus a selection of works on rare loan from the Vatican. 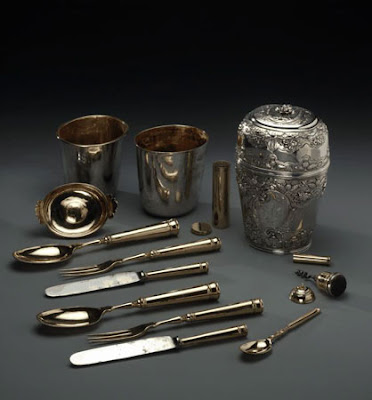 the separate elements of the travelling canteen

My favourite exhibit was a silver travelling canteen, filled with every implement a prince could possibly need. The outer case of the canteen was decorated with the 3-feathered badge of the Prince of Wales, while the lid was chased with bands of linked thistles, a figure of St Andrew and Charles’ motto. Because the so-called Prince of Wales was made a Knight of the Thistle shortly after his birth, the collar and badge of the Most Nobel Order of the Thistle was prominent. This was the highest hon­our in Scotland.

The canteen set contained 31 pieces, includ­ing a perfectly fitted: wine-taster, cruet, teaspoon and marrow scoop, corkscrew, nutmeg grater, salt and pepper shakers, wine beakers, drink­ing bowl and a knife-fork set. The outer case, a beautiful example of rococo craftsmanship, was dec­orated with bands of linked thistles, flowers and leaves, repres­enting the collar of the Order of the Thistle.

Charles brought the canteen with him to Scotland in 1745. When the Rebellion ended in Ap 1746 with the defeat of the Jacobite army at Culloden, the canteen was lost. The victorious government commander, William Duke of Cumb­er­land, captured the canteen and gave it to one of his aides, George Kepple, later the Earl of Albemarle. The silver canteen remained in his family until 1963; after a successful fundraising campaign to prev­ent it being sold abroad, it was finally acquired by the Museum in 1984.

Who made the canteen? The entire extended family of Edinburgh goldsmith Ebenezer Oliphant were dedicated Jacobite soldiers or Jacobite lay supporters. This elaborate travelling set, made by Ebenezer Oliphant in 1740-41, seemed to have been a 21st birthday gift for Prince Charles.

The Stewart Society was very proud of Oliphant who ended his apprenticeship in 1737. He had learned the skill from James Mitchellson, his master and the most gifted goldsmith in Scotland. I have seen other Oliphant silver art from the 1740s, largely clean, minimally decorated silver footed bowls, tea pots or salvers. By 1753 Ebenezer had prospered so well that he was able to help the family buy back the estates which had been forfeited after the 1746 defeat. Did he continue with richly decorated silver, like the canteen? Or was this a one-off art work, specially designed to proclaim Prince Charles’ right to the British throne? 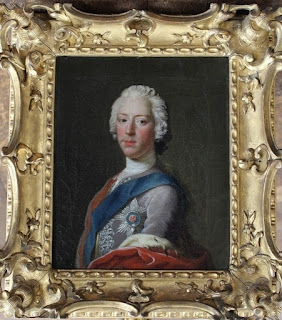 There are two ironies in this story. Firstly after having spent a total of only 14 months in his “homeland”, Prince Charles eventually escaped to France and never set foot in Scotland again. Secondly the greatest gold and silver artists EVER were Protestant Huguenots expelled in 1685 from France by the Catholic king, Louis XIV. How ironic that when Catholic Prince Charles wanted the best silver art in 1740, he had to commission the pieces from British silver artists.

I never liked King James II, the Old Pretender, the Young Pretender or any part of the Jacobite cause, but I would sell my house and the beloved spouse’s soul to own that piece of Jacobite silver art.

He was one of King George II's sons. After the Battle of Culloden, once the Stuart forces had been defeated, the Butcher gave orders to shoot and bayonet every wounded French soldier, every British and Irish rebel. He had the home towns of the rebels burned and the civilians hanged or gaoled.

I think the Butcher was treating this as another Civil War.

Hello Hels, As an example of battle-ware, that canteen strikes exactly the right note. An appropriately decorated exterior, with the inner utensils rugged and plain, but still elegant.
--Jim

I have seen many metal mess kits, water bottles and other utilitarian equipment issued to soldiers. They were cheap to make en masse and functioned perfectly well.

But Bonnie Prince Charles' canteen looked like a masterpiece of silver art, way too expensive silver-covered-in-parcel-gilt to really use. I would not have taken it into battle, if the set had been given to me!

Another piece in the same Jacobite exhibition was a stunning gold-mounted snuffbox of tortoise-shell, with a miniature of Prince Charles Edward Stuart on the lid. But note that this snuff box was made in Europe when the Prince was no longer involved in any battle.

Your poor spouse doesn't come out of this post well! The ironies make this tale doubly spell-binding because the Jacobite Rebellion still looms large in British history.
CLICK HERE for Bazza’s heuristic Blog ‘To Discover Ice’

That really is a nice piece of craftsmanship. The exhibition sound really interesting.

thank you for the Luck of the Vails which I did not know about. But I do recognise the Luck of Edenhall, a beautiful piece of glass art.

I did History of Britain, Australia and the British Empire throughout high school and was always acutely aware of the Civil War. But the Jacobite Rebellion just seemed like a hopeless, extended attempt by James II and his descendants (with hefty French support) to reclaim the throne.

I wonder how Jacobite history is continued today. A few years ago "The Sons of Scotland" wrote: "Few of the battles over the last 1,000 years, not just in Scotland or the Highlands itself, but within the rest of Britain, have left such a bitter legacy as the Battle of Culloden on April 16, 1746. Our ancient clan system disappeared in an orgy of systematic destruction". Now "the graves of the Jacobite soldiers killed in the attack are well marked at Culloden, but experts were unsure of the location of government dead. However, an extensive survey by Dr Pollard's team has revealed the whereabouts of the burial site of 260 of Cumberland's men, compared to c1000 Jacobite casualties. Dr Hamish McLaren, Chairman of the Clan MacLaren Society, brought a sword that belonged to a young Jacobite called Donald McLaren".

beautifully designed and crafted, and very expensive. I don't know how much it cost in 1984, but the silver gilt canteen involved a massive public fundraising campaign to keep it in Britain. I sent a donation myself :)

I dont know if you are aware of it but there is a really good documentary series about the history of Scotland on U Tube .

I love receiving references in blogs, which I immediately sent to my spouse... thank you.

My beloved knows about science, medicine and historic buildings, so I don't ask him to write about history or the arts. Thus his task in this blog is to search for interesting journal articles, visit special museum and gallery exhibitions, track art auctions and take photos whenever we travel. All I have to do is write it all up :)

Good article. That episode in our history is often misrepresented by one partisan cause or another, as all history can be of course. The exhibition sounds interesting - wonder if I can sneak up to it..!

I wondered about Ebenezer Oliphant's connection to the Jacobite cause. Clan Oliphant reported a very close connection:

Believed by the Jacobites to be the rightful King, Prince Charles Edward Stuart left Italy for Scotland, eventually landing on the Isle of Eriska in July 1745. The Jacobites flocked to the standard of Bonnie Prince Charlie, the Oliphants being no exception. Charlie made a tour around the highlands to gain the support of the Clans. At Blair Atholl, he was joined by Laurence Oliphant, 6th Laird of Gask.

The Prince continued on to Perth, where he was met by his Highland Chiefs and Chieftains, including the Duke of Perth Lord Ogilvie and Laurence Oliphant of Gask. He later breakfasted at the House of Gask on his way to Edinburgh. Laurence Oliphant and his son accompanied Prince Charlie on his excursion into England, the latter being an Aide-de-camp to Bonnie Prince Charlie.