Arts precincts and the City Beautiful in Melbourne and Philadelphia

The Melbourne Arts Precinct Blueprint 2014 is a co-ordinated app­roach to the future devel­op­ment of the precinct. The study has been co-ordinated by the key arts stakeholders: City of Melbourne, Arts Victoria and State Government. Whilst each individual org­anisation has its own plans for the future, the Blueprint sees the precinct as a coordinated plan for this part of the city. A vibrant South­bank precinct needs mixed-use act­ivities with a strong arts focus, vibrant street activity and energy. And as ever, tree-lined streets and beautiful Victorian buildings were/are well preserved.

Was Melbourne’s Art Precinct based on the ideas of the City Beaut­iful Movement, imported from an overseas city? In the C19th, I might have examined the Vienna’s Ringstrasse. But in the C20th, I would be looking instead at Benjamin Franklin Parkway Philadelphia. 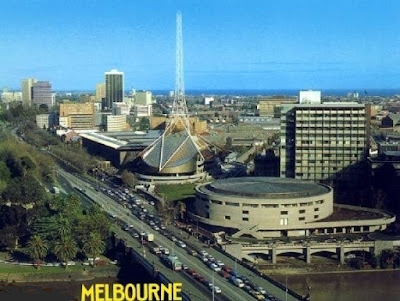 At first Philadelphia’s Parkway was a bold dream by the architects who want­ed urban planning that could make Philadelphia very special. Fort­unately some institutions were already in place. The Cath­­edral Bas­ilica of Saints Peter and Paul, head church of the Rom­an Cath­olic Archdiocese, had been built on Logan Square, as far back as 1846-64 (by Napoleon LeBrun). As had the Academy of Natural Scien­ces had opened in 1876 (architect James Windrim).

A formal Parkway plan was dev­el­oped in 1907 by Horace Trumbauer, Clarence Zantzinger and Paul Crét for the Fairmount Park Art Association. It was a region of educational activ­it­ies grouped around Logan Square as the central anchor, an art­istic centre developed around the Fairmount Plaza, at the entrance to Phil­ad­elphia’s best park. Work started in 1917, cutting a very wide (160’) corridor through Fair­­mount’s resid­ential housing. Philad­elphia had thus created a Champs Elysee-like boulevard that connected the centre city to Fairmount Park.

Fortunately Philadelphia celebrated the 100th anniversary of the Declaration of Independence in 1876 with America's first World's Fair. And the Philadelphia Museum of Art was originally chartered in 1876 for the World Fair. The City Council funded a competition in 1895 to de­sign a new museum building, and by 1907 arch­itectural plans from Zantzinger and Charles Borie started const­ruct­ion in the Fairmount Parkway. The main museum building opened in 1928. Across from the Museum’s main building, a newly renovated and expanded building opened in 2007.

The Town Hall was completed in 1901. Designed by architects John McArthur, John Ord and Bleddyn Powell, it was the largest municipal building in the USA.

The main branch of the Free Library of Philadelphia opened its main branch doors alongside Logan Square in 1927. The first section of the Pennsylvania Museum was opened in 1928 on the Parkway, designed by architects Borie, Trumbauer and Zant­zinger. It was renamed Philadelphia Museum of Art ten years later.


The Rodin Museum opened on Parkway in 1929. The architects were Crét and Jacques Gréber.

Designed by John Windrim, the Franklin Science Institute opened its new building on the Parkway in 1934-38, after 110 years in other Philadelphia locations. Note the imposing statue.

As much time was put into transforming the Parkway outside (sculp­ture, gardens) as was put into the individual buildings’ architect­ure eg Swann Memorial Fountain was designed by sculptor Alexander Stirling Calder and comp­leted in 1924, as the centrepiece of Logan Square.

I wasn't very interested in the secure detention Youth Study Centre which was constructed on the Parkway in 1952 (by J Roy Carroll, John Grisdale and William Van Alen). But I was fascinated in 2009 when the youth centre was demolished to make way for the Barnes Foundation which had been in Merion for decades. It opened in 2012.

Moore College of Art and Design moved to its new campus on the Parkway in 1959. And was expanded in 2000.

Other American cities were planning similar projects during those years, creating Amer­ica's first important contribution to urban design, the City Beautiful Movement. The city planners wanted a model of an orderly, classical metropolis, crossed by boule­vards and dominated by contemporary Beaux-Arts and neoclassical buildings. Phil­ad­elphia could rightly claim it met the urban challenges of the new era, with a grand boulevard evoking the energy of the C20th. 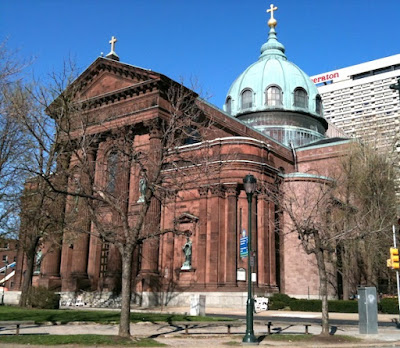 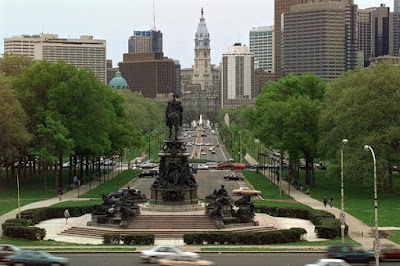 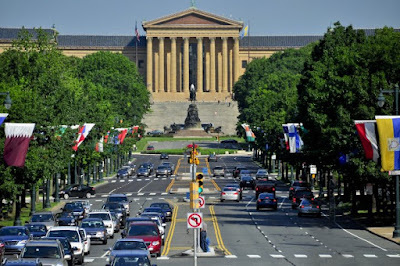 In 2009 critic Anthony Tommasini noted that if a sprawling multi-disciplinary performing-arts complex were proposed in a big city today, it would probably never be built. Talking about the Lincoln Centre for the Per­forming Arts in New York, he said the community assumed that orchestras, opera companies, ballet troupes and theatres would gain a lot by bec­om­ing partners in a centralised complex. But, he asked, is that still true? Firstly the promise of arts org­anisat­ions working together can become a daily grind of competing boards. Secondly such complexes tend to result in an arts ghetto, away from the broader community. He con­cluded that because an Arts Precinct allowed arts lovers to trav­el from their suburbs, dine, attend a performance and re­turn home, it plac­ed functional convenience above the desir­ab­ility for the arts to be owned by the community.

I am not sure his arguments are valid in Melbourne or in Philadelphia, so now is time to read Richard Carreño's Museum Mile: Philadelphia's Parkway Museums, 2011. It tells how and why the Benjamin Franklin Parkway eventually hosted at least 12 major cul­t­ural institut­ions of national.

Hello Hels, The City Beautiful movement has left its mark on Cleveland, notably in the handsome Mall area downtown and in the University Circle area with its impressive museums and schools. But a complete, overarching plan was lacking, which probably has held Cleveland back from greater fame and reputation.

More recently, Cleveland had another chance with the Chagrin Highlands area, a large tract of prime suburban land (about the size of New York's Central Park), mostly owned by the city of Cleveland and held in reserve for when some master plan should be evolved.

You can guess what happened. After remaining intact for decades, it was too much temptation for developers, who talked the city into piecemeal, ordinary development of mixed office buildings, residential and retail, anchored it seems by large medical offices. Today, instead of something unique in the world, we have 1000 acres of "more of the same."
--Jim

Oh Jim that awful story is just the thing that would happen in Melbourne too.

Those enormous steps in the last image of the Philadelphia art museum were immortalised on film and actually have a statue of the fictional Rocky Balboa at the bottom.
Thanks Helen for new information, as always.

The Southbank Theatre is the primary home of Melbourne Theatre Company, and is located in a perfect position in the Arts Precinct. But the strange geometries on the front of the theatre are ..strange.

I am lucky enough to have visited both Philadelphia and Melbourne. Although I enjoyed being in both cities Melbourne certainly felt more cultural. I enjoyed The Victoria National Gallery in general and it's aboriginal art in particular. I think the indigenous people of Australia may have invented pointilism!
CLICK HERE for Bazza’s floccinaucinihilipilificatious Blog ‘To Discover Ice’

If building and spacious land is held "in reserve" for a much later master plan, of course the land will be ruined. I don't blame greedy developers; I blame the City authorities for their own lack of vision. If Cleveland wanted its own version of New York's Central Park, they could have designed perfect music, art, museum or any other facility inside massive parklands with lakes and thousands of trees.

I have seen those enormous steps in front of the Philadelphia art museum and tried to walk them sedately (let alone run up them like Rocky Balboa *groan*). But I am glad they are there because the perspective for the viewer is amazing.

that is a good point. An Arts Precinct needs to be an integrated geographical area, but does it have to be an integrated architectural area? If 90% of the buildings are, for example, Beaux-Arts and neoclassical buildings, does it matter that the playhouse is "covered with a matrix of glowing tubes in angular box shapes that seem to hover around around the black box of the building?"

Agreed. When Victorian had its 19th century amazing gold rush, the capital city became Marvellous Melbourne, largely because of its stunning architecture and endless parklands. The original 1867 National Gallery of Victoria was beautiful, but it was eventually too small and too remote from the Arts Precinct as it was developing on the other side of the river. In time, even the new NGV was too small, so the Australian collection of artworks moved to the Ian Potter Centre, the NGV section that is in Federation Square.

The purists, needless to say, did not like the modern architecture. Or the splitting of the NGV collection.

It all looks very attractive, but I really don't know whether I like the concept. I don't particularly like the way Melbourne's Arts Precinct has developed. The late state politician Lynne Kosky announced putting a plaza through in between The Arts complex and Hamer Hall, connecting the area down to the lower level in behind and I rather liked that idea. It seemed to come to nothing, even though it was a quite firm announcement.

When Kosky was Minister for the Arts, she was very successful with some of her projects, but not all as you noted. When she was developing Hamer Hall Concert Hall, Kosky made the very wise decision to work with Arts Victoria, the Arts Centre etc etc.