In 1939 the German U-boat U47, under the command of Lt Gun­ther Prien, slipped undetected into Scapa Flow. Prien launched a tor­pedo attack on the battleship HMS Royal Oak which was lying at anchor in Scapa Bay and instantly the huge ship sank to the bottom of Scapa Flow with 833 crew deaths. U47 slipped away undet­ected.

The tragic terrible loss of life and failures of the Scapa Flow defences prompted the call for a substantial eas­tern blockage. In March 1940 Winston Churchill approved the building of causeways, to link the south isles to Mainland Orkney and to seal off the eastern approaches to of the naval port. Work soon started but was painfully slow; a shortage of local labour was causing delays. So 550 Italian prisoners of war, captured in the North African camp­aign, came to Orkney in 1942. These Italian POWs were shipped in specifically to work on the huge causeway building project, known as the Churchill Barriers to the east of Scapa Flow. 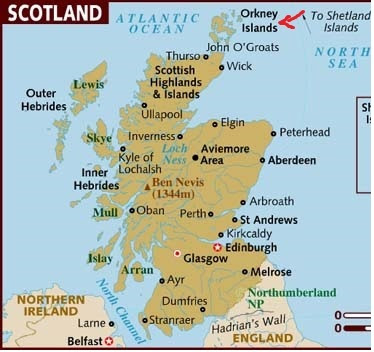 Map of Scotland with Orkney Islands marked in red

As a result, camps had to be estab­lished for the Italians on the previously uninhabited island. The biggest of them was Camp 60 on Lamb Holm.

The Italians POW status changed only in Sep 1943 when Italy left the Axis Powers, and instead joined the British and their Allies. The Italian workers in Orkney were given more freedom and began to be paid properly for their labours.

The It­alians needed a proper place of Catholic worship. With the help of the camp's Catholic priest Father Giacobazzi, they pers­uaded Camp 60’s commandant, Major Thomas Buckland, to allow them to build a chapel on Lamb Holm. Permission was granted on the condition that all work on the church would be carried out AFTER working hours on the barriers. Thus the Chapel was built by tired Italian prisoners during 1943 and 1944. Thank you to the Spirit of Orkney and to The Guardian.

The Catholic Italian Chapel was a highly ornate building, surp­ris­ingly constructed by the prisoners from very limited materials. Two Nissen huts were joined end-to-end. The corrug­at­ed interior was then covered with plaster board and the altar was constructed from concrete left over from work on the barriers.

Most of the interior decoration was done by Domenico Chiocchetti (1910-99), a talented pris­oner from Moena in Italy. He painted the sanctuary end of the chapel and fellow-prisoners de­corated the rest of the interior.  The light holders were made from food tins. The baptismal font was made from the inside of a car exhaust, covered in a layer of concrete. One end of the hut was lined with plaster board to form a sanctuary; an altar, altar-rail and holy water stoop were expertly fashioned from concrete. With the success of the adornment in the sanctuary it was felt the whole chapel should be lined, then painted the walls to appear as if they had bricks, carved stone, vaulted ceilings and buttresses. 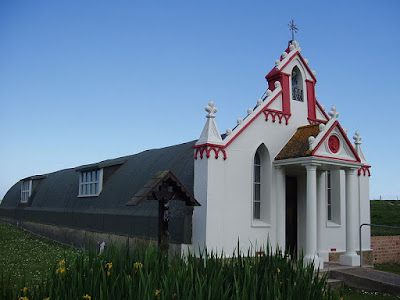 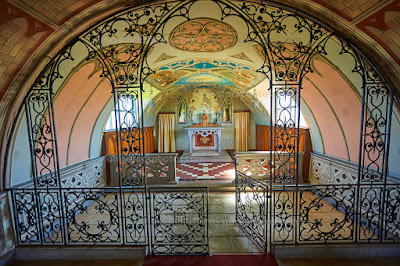 The paintwork was completed with frescos of angelic figures, stained glass windows and an altar piece depicting the Madonna and Child surrounded by cherubic figures. Two painted glass panels flanked the Madonna and Child, depicting St Francis of Assisi and St Catherine of Siena. The Italian artist frescoed the sanctuary vault with symbols of the four evangelists; low on either side, he painted two Cherubim and two Sepraphim with a white dove in the very centre of the vault.

All the materials for the decoration were scavenged from wherever possible. Wood was sourced from a wrecked ship for the tabernacle. A rod-screen and gates encl­osing the sanctuary were expertly fashioned from scrap metal. They also made two candelabras which stood on the alter.

The POWs created a fac­ade out of concrete, conceal­ing the shape of the hut and making the building look more like a church. Then as work progressed inside, it was decided to construct a more beautiful façade for the front of the church with pillars, Gothic pinnacles, archway and bell-tower. Directly above the door on the front of the archway, a head of Christ was sculpted from red clay, complete with thorn crown. Finally a thick layer of cement was applied to the outside walls of the Nissen huts, to protect them from the Orkney weather.

When his fellow pris­oners were released in Sept 1944, Chiocchetti rem­ained on the island for a few weeks to finish dec­or­ating the newly consecrated chapel, particularly the font. The rest of the chapel was completed after WW2 ended. Given the restrict­ions on time and materials, the chapel became a clear statement of ded­ication to the Catholic faith.

Appropriately a statue of St George was plac­ed in the grounds of the Italian Chapel as a war memorial. It was built from barbed wire and concrete. 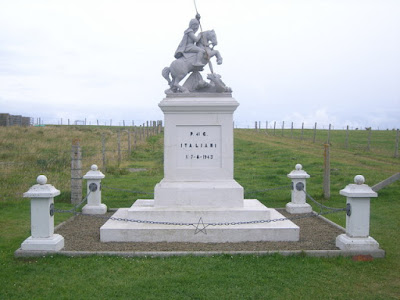 War memorial with a statue of St George

More mdern events
In 1958, the Chapel Preservation Committee was set up by a group of Orkney residents. In 1960, Domenico Chiocchetti returned to assist in the restor­at­ion. He returned to Orkeney a second time in 1964 with his wife. Before going back to Italy this time, he wrote a warm, tear­ful letter of thanks to the people of Orkney.

When some of the other prisoners returned in 1992 to commemorate the 50th ann­iv­ersary of their arrival on the island, Chiocchetti was too ill to travel. In 1996, a declaration was jointly signed by offic­ials in Orkney and Chiocchetti's hometown of Moena, poignantly reinforcing the war time ties between the two places.

Sadly he died in 1999. In the same year, the Chiocchetti family attended a memorial requiem mass at the Orkney Chapel in his honour.

Today, the tabernacle is still used as a chapel and remains a popular tourist attraction, receiving 100,000+ British and foreign visitors every year. It has become one of the best-known and most moving symbols of reconciliation in the British Isles. And has a category A listing.

2014 marked the 70th anniv­ersary of the chapel's completion and at a commemorative mass the Apostolic Nuncio, Archbishop Antonio Mennini read a message from Pope Francis. His Holiness said he was praying that the Chapel, built in times of terrible war, would continue to be a sign of peace and reconciliation. At that special mass in 2014, Domenico’s daughter Angela Chiochetti sang Panis Angelicus.

That's a heart-warming story with continuing benefits. I have heard other similar tales of German POWs being incarcerated in two virtually 'open' camps near where we live. One was a farm where the prisoners were happy to work. The other was a place where the locals thought they would be safe from German bombs because of the camps - sadly not so!
It's hard to believe that the Italians were happy to be fighting against the Allies in the first place. Many Italians chose to remain in Scotland after the war, especially in Glasgow.
CLICK HERE for Bazza’s argle-bargular Blog ‘To Discover Ice’

That's a place I have long wanted to visit! You're so lucky to have had the chance to go. There's a real interest in POW camps, from both world wars, in the UK at the moment. Maybe it's just me. I wouldn't want to give the impression that people are talking about the subject when they cross the road, but I think there's certainly interest. A surprising number of German and Italian PoWs remained in the UK after the war, working on farms, perhaps, and marrying locals.

The Italian POWs must have been excited to leave the war but distressed in the freezing weather of far north Scotland.

What an amazing structure and so beautifully made. Without knowing how it came to be, I would be scratching my head if I came across it.

Hello Hels, So often when we hear descriptions like that (such as made from tin cans, car exhausts and concrete) we think of roadside attraction-type structures, but here we have something of true beauty and permanent value, inspired by devotion which fueled remarkable craftsmanship.
--Jim

Was Domenico Chiocchetti an artist in Italy before the war? The chapel art looks very professional.

that is so true, and some POW camps seemed to particularly fascinate historians. I spent a lot of time visiting/reading about the German POW camps in the _Channel Islands_ and the British POW camps on the _Isle of Man_. If it wasn't for the art and architecture of the Catholic chapel on Lamb Holm, I probably would have been less interested in the Orkney Islands.

It is fascinating that so many POWs came into the UK after the Axis defeats in North Africa in mid 1943. Some 260,000 POWs included more than half Germans and fewer Italian, but there was a difference - by October of the same year, the Italians had left the German Axis!

By the end of the war, there were some 400,000 POWs. I imagine that those men who had been given proper work in agriculture and building were well fed and protected, so tens of thousands of prisoners voluntarily remained in the UK after their landsmen had been repatriated. The Italians who remained seemed to be warmly accepted; the Germans perhaps less so.

The average high temperature for June is 14.0c on Orkney
The average low temp for Jan is 1.9c on Orkney and has brutal gales and constant rain.

The average high temperature for June is 26.9c in Rome
The average low temp for Jan is 3.1c in Rome and moderate rain.

The building of causeways to link the south isles to mainland Orkney and to seal off enemy entry into the naval port was better for Italians than fighting in North Africa. But being inside a warm, dry chapel was better still.

so many of Orkney's POW camp facilities were destroyed over the years, we need to be very grateful for the Chapel Preservation Committee's work and history-writing. I am not sure how many local Catholic citizens use the chapel, but I have seen thousands and thousands of tourists thoroughly enjoying the site.

the only real building materials available to the workers were corrug­at­ed iron huts and the concrete left over from work on the barriers. Everything else was cobbled together from second-hand and adapted materials found around northern Scotland, mud, sweat and love for the Catholic church. Pretty amazing job!

Domenico Chiocchetti's daughter said that, before the war, her father always loved art. But because he was the youngest of eight impoverished siblings, a full time career in the arts was always going to be impossible.

In Orkney, his first art project was a statue in the main square of the camp - St George slaying the dragon. He was soon delighted to be working on further art projects.

This is really fascinating. I had not heard of the history or the delightful chapel before :-)

strange, isn't it? I thought I was very knowledgeable about camps on the Isle of Man and on the Channel Islands, but would have been hard pressed to find the Orkneys on a map until a few years ago.

That is a lovely story, Hels. It looks like such a beautiful chapel and it's wonderful that the wartime ties are so strong.

I met a former Italian POW in Rome in the 1980s. He stayed with a family in Australia and loved it! He often visited the family. I think that he would have had a better time here than in the cold and bleak but scenic Orkneys.

The Italian soldiers didn't want to fight and didn't hate the British or the French. Instead of being wounded, killed or captured in the North African camp­aign, they would much rather have been at home with their families and businesses. So I agree that Italian POWs were very grateful for the chapel (memories of home), Orkney girlfriends and for any families that befriended them.