Born in South Africa in 1959, Deborah Levy’s family exiled themselves to London in 1968 as opponents of Apartheid. She started writing poems, plays and novels in the 1980s. Her 2011 novel, Swimming Home, a dark fable about a famous poet holidaying in the French Riviera, was eventually published after having been turned down by mainstream publishers. It went on to be nominated for the Man Booker prize. Last year she published a collection of short stories, Black Vodka. Now Penguin is reprinting her old novels.

Swimming Home depicted a sun-bleached, Mediterranean setting; explor­ations of troubled familial bonds, of sexuality and an examination of exile. Hot Milk shared these themes and obsessions with Swimming Home.

Levy’s Hot Milk 2016 (publisher Hamish Hamilton) sounded like an ironic title, given the connect­ion with cosy and bland toddler food. Yet Sofia  Papastergiadis was spending a night­mare holid­ay in a rented beach house with her mother Rose, in southern Spain. Rose had voluntarily re-mortgaged her London flat to live in Spain, to be­come a patient at a famous clinic run by a man called Dr Gómez. But her daughter-slave Sofia involuntarily had to abandon her PhD in anthropology, to work instead as a barrista in a London cafe. 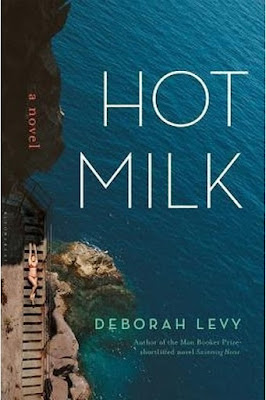 Image of a lithe young woman in a red bikini
on the cover of Hot Milk by Deborah Levy
Shortlisted for the Man Booker Prize, 2016

Despite Dr Gómez’s clinic being built from rich material, there seemed to be no other patients being cared for. So why did the doctor need more staff? His daughter worked just as intensely with the patient(s) as Gomez did.

Dr Gomez treated ailments by unknown means, perfectly sensible since Rose was an arrangement of rapidly changing ailments. But could Dr Góm­ez cure the mysterious paralysis that confined Rose to a wheel chair and bound her daughter with chains of control and dependency? There was no clear cure in the book – only strange assertions from a doctor who might have been a charlatan; a relentlessly noisy dog on the beach that was forever chained up; boiling hot sun and a sea full of medusas i.e poisonous jellyfish.

Only the sea offered relief from Almeria’s summer sun but the sea was infested with medusa jelly fish. Note that in Greek mythology, Medusa was a monster, a winged female with living, venomous snakes in place of hair. Gazers upon her hideous face would turn to stone. Did the elusive, alien jellyfish in Spanish waters (and in this novel) refer to the ancient and monstrous Greek Medusa? Sofia was badly stung on her very first day in the sea!!


The 25 year old threw a vase on the floor in Almeria. The vase was a replica of an ancient Greek krater, a bogus reminder of Rose’s ex-husband and Sofia’s Greek father, Christos Papastergiadis. He was the man who had aban­d­­oned mother and daughter when Sofia was a toddler. Sofia looked at the shattered vase and saw the ruins that were once a whole civil­isation, an image of her mother’s shattered life. And her own! Sofia’s trip to Spain with her mother marked a shattering of her life, a life that has been on hold because of her mother’s moment by moment demands.

In Spain Sofia became closely involved with a German seamstress, In­grid Bauer, whose body was long and hard like an autobahn. I wond­ered why the enticing Ingrid was included in the story - to test Sofia’s sex­ual­ity, or to present more stinging of her damaged heart and body? 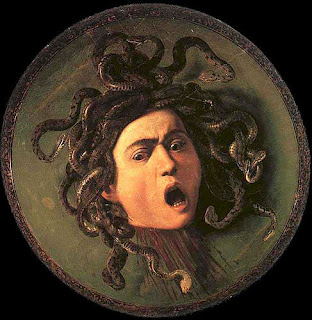 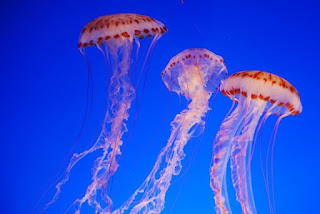 Medusa of Greek literature  (above)         Medusa jellyfish, Spain (below)

Sofia was floating through her life, like the slimy medusa jellyfish that drove the tourists away from the white-hot beach. When Sofia was stung by those despicable jellyfish, a young medical student called Juan looked after her injury – and her sexual needs as well.

It came as a shock when Sofia suddenly deserted her mother in Spain to visit her estranged elderly father in Greece. If her father had truly been a wealthy man, why did he limit Sofia to a storeroom with no window and a temporary camp bed? Why did he have to marry a second wife who was barely out of her teens and start a second family in economically impoverished Athens? If he couldn’t love his first daughter, was he going to love his second baby daughter?

I was sadder reading about Sofia’s negligent father than I was read­ing about her manipulative mother. While her mother’s relentless and demanding illnesses overwhelmed Sofia’s life, her father’s new family wiped out her own past. Erica Wagner added another thought. What Sofia had built in the present, with Ingrid, Juan and Dr Gómez, was unstable and could pour away like sand at any moment.

Sofia’s life had been on hold because of her mother’s incessant demands and her confusion of her mother with herself. So to me Hot Milk was a powerful novel of the interior life, using the mother-daughter relationship to explore the nature of the feminine. But I disagree with Helen Elliot that this novel is as luscious, cruel and funny as it is revelatory. It is cruel and revelatory, but not funny!

I read the book only 18 months after my beloved mother died. Thankfully the book was easy to read, as well as being rich with meaning, research with truth and identity. However I am still not sure that the terrible jellyfish stings that made Sofia’s Spanish life a misery were not equally as painful for the reader. If the female reader loved her mother, or even if she did not, be warned: it is difficult not to absorb the mother’s suffering, just as Sofia did.

I personally agree with what Deborah Levy said about her own love of swimming. “I swim every day. It's good for thought-drifts and suits novel writing”. Especially with emotional, and sometimes toxic characters.

This sounds like a really well-crafted novel, full of metaphor and below-the-surface meanings. I just read some reviews and it seems that the issue of whether or not the book contains some humour has appeared to split reviewers and readers alike! How delicious!
CLICK HERE for Bazza’s loquacious Blog ‘To Discover Ice’

The novelist Leah Kaminsky must have borrowed Levi's problematic mother for her novel The Waiting Room.

Hello Hels, I have been wary of prize-winning books for some time, but I might want to check this out in the library to see if the writing seems my style or not. Recently I finished a book you recommended to me quite a while ago--The Hare with Amber Eyes, and found it quite fascinating, blending as it does personal, Jewish and object/art histories.
--Jim

below the surface meanings all over the place yes, including invisible jellyfish under the water. I hope you enjoy the book.... I should get a spotter's fee for each blog reader who now goes to their local bookshop.

that was EXACTLY the topic at the coffee shop on Monday!! Two more things: Leah Kaminsky and Deborah Levy were both born in the identical year (1959) and both were the daughters of mothers who emigrated.

using reading guides like the Man Booker Prize Short List is a wonderful way to navigate yourself around if you have limited hours for novels each year.

Our local book shop put up a table each year at Man Booker time, with plenty of copies of each paperback on the short list - it is as though I died and went to literary heaven. Even if it turns out that one or two of the books are not to your taste, it is still a learning experience.

I read this last year . Great read . I think Ingrid the German seamstress is a free spirit who does as she pleases as opposed to Sofia who is a captive of her mother and the stories her mother has woven about her father . Sofia is stung into action on all fronts of her life to find out for herself . She finds her father and sees him through her own eyes not the embittered eyes of her mother , she finds the mysterious Dr Gomez perspectives on her mother are a counter to the narrative she has believed all her life . I think its all about growing up and away from the tyranny of the relationship that mothers and daughters can have with each other .

Thank you. Perhaps when I read the book, my mind was already very fragile about mother-daughter relationships. But I must admit that Ingrid presented me with imminent or at least potential crises in her own right. Those narratives that we believe all our lives (that you refer to) are certainly tricky to negotiate in middle age.

Yes they are because they are so intense and even when we are competent in our lives , it seems to me that so many daughters have problems with the mother relationship and mothers with daughters. I guess that all we can do is do our best and be as honest with ourselves as we can be .

I had wonderful grandmothers, mother and aunts, but no sisters and no daughters. So I fully expected that I would struggle to have as solid a relationship with my sons as I had had with my own mother. You are so correct... "all we can do is do our best and be as honest with ourselves as we can be".