Nancy Wake - the woman the Gestapo called the White Mouse

Nancy Wake (1912-2011) was born in the New Zealand city of Well­ing­ton, last child of Charles Augustus Wake and Ella Rosieur. The fam­ily moved to Sydney when Nancy was a toddler. Shortly afterwards, her father abandoned the family, so she rebelled and ran away as soon as she could leave home. With financial help from an aunt in 1932, Nancy sailed for Europe and trained as a journal­ist in London. Two years later she settled in Paris, starting work for the Hearst group of newspapers as a journalist.

I don’t think this New Zealand-Australian knew much about Fascism. In 1935 she was a tourist in Vienna and Berlin, having a pleasant time, when the violent anti-Semitism of Nazism became crystal clear to her for the first time.

In November 1939 she married Henri Fiocca, a cute and weal­thy industrialist. It was a great life in Marseilles, filled with love, champagne, caviar and travel. 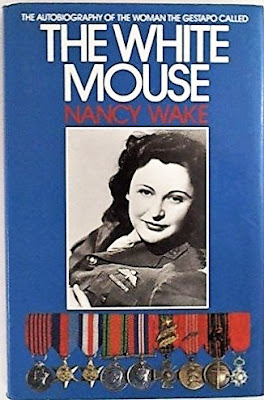 Six months later in 1940 Germany in­vaded France, so Fiocca and Wake joined the fledgling Resistance. Their growing involvement in the Res­istance saw the couple helping Allied servicemen and Jewish ref­ug­ees escape from France, across the north of Spain and onto the Portuguese coast.

After Henri was called up for service, Nancy enrolled as an ambul­ance driver. She began to help British soldiers trapped in Occupied France to escape back home, and this led to her risky undercover work with the famous escape line organised by Pat O'Leary.

Ms Wake was placed at the top of the Gestapo's most wanted list so she planned to flee France for England, as advised by husband Henri in May 1943. After several failed escape attempts and 4 days of inter­rog­ation in a Vichy prison, Wake escaped across the Pyrenees. The White Mouse, a nickname given to Nancy by the Gestapo for her slipperi­n­ess, had escaped their clutches again.

Husband Henri promised to leave France as well. But he was picked up by the Gestapo and shot in August 1943. For decades she blamed her­self for his death, given she was more hated by the Gestapo than Henri was.

In June 1943 she reached Britain and began training in the Fr­en­ch Section of the Special Operations Executive/SOE as a spy and cour­ier. Her training reports record that she was a very good and fast shot.

Wake then returned to Nazi-occupied France to work with the Resist­ance in pre­paration for the D-Day landings in Norm­an­dy on 6th June 1944. Parach­uted back into France, Wake's job was to dis­tribute arms among Resistance fighters hiding in the mountains. She was in the Auverg­ne region along with Major John Farmer, leader of the Free­lance resist­ance circuit. Her orders were to help organise and arm the local maquis/a band of rural guerrilla French Resistance fight­ers, and soon Wake was fighting alongside them in pitched battles against the Germans.

A fortnight after D-day in June, a major attack by 10,000 Germ­ans in tanks and aircraft was made on their positions, during the time when they became separated from the group's radio operator. To try to re-estab­lish contact with London, Wake rode 500 kms by bike to make contact with a radio operator from another SOE group. Later, working with two Amer­ican officers when the Germans launched an attack on another maquis group, she took command of a section whose leader had been killed and coolly got the rest of the group out safely. This was not a woman who worried about her nail polish being chipped or her lipstick smudged. 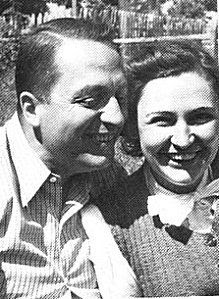 Henri Fiocca and Nancy Wake in the happy days, 1937

Post war
Nancy Wake was regarded as an absolute heroine in France, the nation that dec­orated her with its highest military honour, Legion d'Honneur, as well as three Croix de Guerre and a French Resistance Medal. After the lib­eration of France, Wake returned to London, where she was awarded the George Medal. The Americans awarded her the Medal of Freedom. [So why did it take 60 years for Australia to honour her service, awarding her the Companion of the Order of Aust­ralia only in 2004??]

Nancy never quite adjusted to peace. She worked at the Air Min­istry in Whitehall, but was bored witless. She resigned in 1957 and immed­iately married John Forward, an Australian bomber pil­ot. He liked a drink or five, and they were well matched. They returned to Aust­ral­ia and had a sociable and sporty life with trips back to Europe and interviews with journalists about WW2 history.

This ex-resistance fighter became a member of the conserv­ative party’s NSW executive and stood for Parliament in the 1949 federal election. She stood for the seat of Barton, held by the Chif­­ley Labour govern­ment External Aff­airs Minister Dr Herbert Evatt, unsuccessfully. In 1951 she again stood for parliament against Dr Evatt - who was by then deputy opposition leader, unsuc­cessfully. After a per­iod living over­seas, Wake again unsuccessfully contested the seat of Kingsford Smith for the conservatives at the 1966 federal election. Finally the couple retired to Port Macquarie.

Wake’s own book, The Autobiography of the Woman the Gestapo Called the White Mouse, was published in 1985, leading to a television drama in the late 80s. Several serious histories have been written about her since. Appropriately Wakes' med­als are on public display in Austral­ia’s most important War Memorial Museum, in Canberra.

John Forward sadly died in 1997, so Nancy returned to live in Lon­d­on. Well into her 90s, seated on her res­erved bar stool in the Staf­ford Hotel bar, she remained as energetic and gutsy as she had been when fighting for women’s action back in her younger years.

Nancy Wake was undoubtedly the bravest women I know. She must have understood that her chances of survival were small, when she chose to return to France during the war as a resistance leader. But she was so energetic, so committed to women playing a full role in the war and so adventurous.. that she seemed oblivious to the risks.

Hello Hels, To say that Wake was a remarkable woman doesn't do her justice, because that relegates women to an inferior role in warfare. She was committed, brave, and facing the brunt of the action by any standard. Her story is very different from that of Mata Hari, whom you recently featured.
--Jim

What an absolutely wonderful human being; a mensch! I had not heard of her, which is a great pity. You have done well in painting this picture. I think one of the most telling phrases was "not a woman who worried about her nail polish being chipped or her lipstick smudged"! I think someone like Jane Campion could make a terrific film about her.
CLICK HERE for Bazza’s adroit Blog ‘To Discover Ice’

A fascinating story I had not heard of her before.

Nancy Wake, the White Mouse was a very good documentary-drama that came out in 1987. Directed by Mike Smith, the miniseries starred Noni Hazelhurst and John Waters. Apparently Channel Seven replayed the complete miniseries back in 2011, but I bought the DVD at the ABC shop.

While I am full of admiration for her bravery and achievements during the war, I'm afraid I did not like her at all as I came to know her on tv and radio. She was rather too right wing for my taste.

Although I knew far more about Mata Hari than about Nancy Wake, it didn't occur to me to compare and contrast the two. Thank you.

Eventually the Dutch woman admitted that a German diplomat had once paid her 20,000 francs to gather intelligence in Paris. Mata Hari was just as brave as Nancy Wake, but Nancy Wake had never had to prove she had al­ways remained 100% faithful to France and Britain.

Jane Campion would be perfect because she has been a very cutting edge and brave female professional in her own right. "Nancy Wake, the White Mouse" was a wonderful docu drama, but it focused a little too much on love and not quite enough on war.

The best things about blogging are that
a] we learn historical events that we never learned about at school or uni... or
b] we read new information about, and new interpretations of, histories we knew a lot about.

as a foundation member of the feminist movement of the 1960s in Australia, it confuses me to admit that strong, brave women can be right wing at the same time. After the war Nancy Wake became a member of the Libs' (conserv­ative party) NSW executive and stood for Parliament in three federal elections!

Worse was Florence Nightingale and much worse was Mother Theresa. Both women were very brave in the face of war and disease, yet neither of them became supportive of the women's movement. Nightingale opposed female suffrage and was nasty about women being allowed to study medicine. Mother Theresa believed pending money on medical care would destroy the poverty that low caste Indians deserved. Teresa forced raped women to have the babies, even if it would kill the mother and the foetus.

Hels, while I have mentioned Mother Theresa before in a truthful manner, I have been sitting on this piece for a long time with the intention of writing about her. I can't bear how people think she was such a saint, no pun intended.

I read "The Missionary Position: Mother Teresa in Theory and Practice" by Christopher Hitchens at least 20 years ago and felt encouraged to read other peoples' work ever since. Needless to say, your post on the topic will be a welcome contribution.

I wonder whether these very strong people believe that people should get where they get by their own personal merits rather than any affirmative action .They in their strength and personal determination may not have much empathy with lesser mortals. I have often found this to be a problem in those who are very conservative in their outlook . They seem t choose to not recognize the totally obvious fact that some people never get a fair go because of their sex, race or religion and the ones that do get through the white middle class middle aged male barrier have to be twice as good as anyone else .)On the other hand the bleeding heart lefties can be in favor of running society as a sheltered workshop. So hows that fro some great generalization !!:)

Let me focus on Florence Nightingale for a moment. She was a brave heroine in the brutal Crimean War; she took huge physical and social risks in her own life; and she actively helped promote nursing as a respectable profession for young women.

So why did Florence Nightingale not use her own unique position as an opportunity to promote OTHER women's rights? Why didn't she use her amazing political connections to work for universal suffrage? You may be correct - having insight into one's own need for financial and political support may not create empathy with other mortals.

I have read a little about Nancy Wake, know a tiny amount about the subject, am intrigued by it and found your post absolutely fascinating. You do wonder a) how these people did the things they did and b) how they adjusted to normal life afterwards. Amazing stuff.

I wonder how adjusted heroes were to normal life after the war. Not only because of the physical injuries or even combat-related post-traumatic stress disorder. But because they went from honoured and medalled stars that every single person in the French Resistance and Gestapo would have known.... to office workers taking the train at 8.37 each morning, and having a cup of tea and biscuit for elevenses.