Author Christina Stead (1902–1983) left Australia in 1928 at 26. She embarked on a succ­ess­ful literary career with the publication of Seven Poor Men of Sydney and The Salzburg Tales, 1934. But the inter-war period was a difficult time to be an Australian writer. Censorship was rife, publishing houses was conservative, and pub­lishers were rarely interested in manuscripts emanating from the colonies. Stead’s first London publisher, Peter Davies, paid roy­al­ties irregularly, although he did champion her two novels in London and New York. Only Simon & Schuster and Harcourt Brace in New York were a bit more attuned to Stead’s House of All Nations and For Love Alone.

Stead became involved with the German/American writer, broker and Marxist polit­ic­al economist Wilhelm Blech aka William J Blake (1894–1968), with whom she trav­el­led to Spain in 1936, just in time for the Civil War (1936-9).

Stead always blamed her father David Stead in Sydney for “deforming” her and so she wrote no letters to him after she left Australia. The Man Who Loved Children, first modestly published in 1940, was the novel that en­shrined her rage and love. The novel was an autobio­gr­aph­ical study of a family dominated by an over­bearing and narcis­s­istic father. Alas it was the only book of Stead’s that I read, and I didn’t like it! 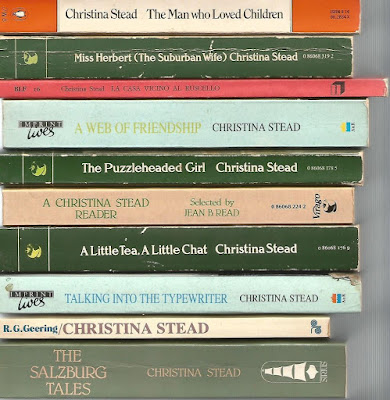 Like her heroine Teresa in For Love Alone (1944), Stead had wanted to escape the stifling parochialism of Australia. During WW2, she taught Workshop in the Novel at New York University. And after the war, she returned to London and mar­ried Bill Blake (1952).

All Australian authors who lived abroad for many years must have paid a hefty price for their cosmopolitanism and subject matter. Famous author Henry Hand­el Rich­ardson NEVER returned to Austral­ia. Mega-famous Patrick White did, but continued to be published primarily in London and New York. Stead, always scathing about the English class system, craved an Australian readership!

Overseas re­v­iews emerged in the Australian literary pages. Literary critic Nettie Palmer started writing to Stead, passing on Rebecca West’s praise of Seven Poor Men of Sydney. The women had been delegates to the first International Congress of Writers for the Defence of Culture, a gathering of intellectuals against Fascism in 1935. 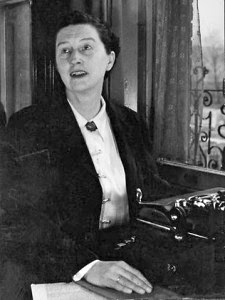 Christina Stead in her English study

Her letters
What was the chance of finding a box of letters in a Canberra base­ment that would shed new light on the work and life of Christina Stead? Under-read at home for much of her life, the great Australian writer created her own literary legend in letters and books. Her letters show Stead, living aboard from 1928-74, was highly regarded among influential literary circ­l­es, es­pecially in America.

The correspondence selected for A Web of Friend­ship, was preserved by family members, by agents and publishers, by writ­er­ly friends and acquaintances all over the world. Her best literary friendships were always with men. She and Blake first met American poet and critic Stanley Burnshaw in New York in 1933, at the office of the communist journal New Masses. Stead’s letters reflected the reciprocity that was so crucial between literary friends — they wrote a detailed analysis of the other’s work, sent each other advance copies, and raged about the treatment they received from ed­itors and critics. Many years later Burnshaw, then at Holt, Rinehart and Winston, ensured the reissue in 1965 of The Man Who Loved Child­ren, and commissioned a great introduction by the critic Randall Jarrell. Burnshaw understood the difficulty of being an expatriate writer.

Her correspondence was a map of an emerging Australian culture. Editors, writers and academics eg Nancy Keesing, Dymphna Cusack, Dorothy Green and Judah Waten sought her out whenever they were in London and fretted about the invisibility of her great opus. Their students were encouraged to read her; they included her in anth­ol­ogies of new Australian writing and nominated her for awards.

Prof of English Ronald G Geering first wrote to Stead early in 1960, acting as a go-between with Angus & Robertson to get paperback editions of her novels published in Australia. He visited her in London a few years later. His respect for her work was strong and her reliance on him grew, so eventually he became Stead’s literary trustee.

Not until after Blake died did Stead return to Australia in 1969, the recipient of a Australian National University arts fellowship. Her novels were largely out of print here, unattainable even in libraries. But she found herself an Official Personage, inter­viewed, photographed, feted everywhere. It was all a great strain, she said; she hated public speaking and drank too much.

During the loneliness after Bill’s death, it was Ron Geering who was left to collect the hundreds of letters she had written over decades. Stead had earlier destroyed all her drafts, most of her private papers and diaries from family and friends. Thank goodness they had kept hers. Even so, the correspondence of an American friend Harry Bloom was not found until 2007.

For years she has been known as the disappointed, insular woman of Aust­r­a­l­­­­ian literature, a novelist who plundered her friends for char­ac­ters, found it impossible to enjoy normal relationships and may have repressed her own sexuality. She saw herself as unlovable, craving passion, fearing rejection. So perhaps it was surprising that the enjoyment of reading the letters left by Stead got ever stronger, covering her passionate narratives and the country’s past. The letters’ awkward Aus­tralian core, their cosmop­olitan sensibility and their intelligent ferocity, drew Prof Geering and Hilary McPhee in. 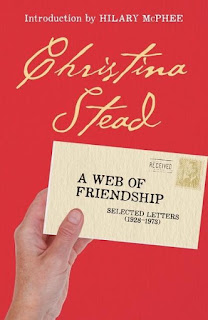 Conclusion
The two main contenders for The Great Australian Novelist, Patrick White and Christina Stead, were almost unknown in Australia back in the day. White’s The Tree of Man did not appear until 1956 and  he didn't win The Nobel Prize in Literature until 1973. Christ­ina Stead was largely unpublished here till 1965. It was not until the 1970s that Australians embraced her nearly 20 novels and short-story collections. In 1974 she returned home to live and received the prestigious Patrick White Award for Literat­ure. Today Stead is regarded as one of Australia's finest novelists.

Readers will enjoy A Web of Friendship: Selected Letters 1928-1973, written by Christina Stead and edited by RG Geering in 1992. Thank you to Hilary McPhee for her new introduction to the Web of Friendship, published in 2017.

In Year 12 English we read novels by Stead, Malouf and Henry Handel Richardson. But I can't say I loved them till years later.

Hello Hels, While I am always looking for new books and authors to read, Christina Stead does sound kind of depressing. However, that last book, of her letters, I will add to my list because I do like to read volumes of correspondence. Since you have introduced Stead as an important writer, I'll use that as my introduction.
--Jim

nod...we had that discussion many times in Years 11 and 12. If only 3 novels could be selected each year, they had to appeal to boys AND girls, students from English-speaking homes and those from other backgrounds, students who loved sciences Vs those who chose humanities etc etc.

By the way I loved Henry Handel Richardson and Judah Waten, but I struggled to read Jack London and Charles Dickens.

if you really do love to read volumes of correspondence, you will find A Web of Friendship: Selected Letters 1928-1973 (edited by RG Geering in 1992) a very telling book. Since the letters were published years after Stead died, I believe in life she had been more open and honest in her letters than she had been in public.

Hello again, I do indeed love old letters, both collected in volumes and as original source material. I recently finished the letters of Edna St. Vincent Millay, which were immensely enjoyable. One caveat is that volumes of letters are often heavily edited, with the result that quite a different picture of the writer is given, especially in areas such as sexual orientation and marital fidelity!
--Jim

Old letters? am presently wading through Patrick Leigh 'Paddy' Fermor's. or one volume of them. however did he find time to do anything else. But I have 2 cartons of weekly letters from 2 women friends over years which I cannot bear to discard, such a chronicle they all are.

Patrick White? we all tried to read VOSS in 1970. However, IMO one may learn as much about The Human Condition from picking up any by Elmore Leonard which cannot be put down until finished.
I buy audiobooks to listen while driving the 50 kms to my nearest source of food and consider it merely an extension of being 5 and pleading "read me a story".

I love audio books. When the beloved and I drove to Canberra and/or Sydney each year, he selected two or three from authors he knew I loved. Best thing he ever did for me in 46 years of marriage!!

But I need to speak to you urgently about a close food supply. You have three choices as I see it:
1. Grow your own vegetables, fruit, chickens, eggs, herbs etc at home.
2. Move to a regional town that has a few excellent shops
3. Get your family and friends to mail food parcels to you, each week. Even prisoners in gaol are allowed to receive food parcels.

oh Hels you are so sweet to care about the mad living arrangements of that old bat ODyne.
her 'regional town' is Hamilton which has IGA, Coles, ALDI, Woolworths and one set of traffic lights if you please. It has all those supermarkets because everyone who lives west to the SA border goes to Hamilton for medical and shopping.

Intensely productive authors probably don't think of grocery shopping. Poor "Stead lived a life that was stormy, eccentric and brave" [which actually describes most of my shopping attempts] and I cannot imagine there was much domesticity.
Just been reading about Elizabeth Jane Howard who also IMO, also wasted her life on a man, propping up the over-rated IMO Kingsley Amiss. How do smart women do these dumb things?
Thanks once again, for adding to my knowledge

I am embarrassed to say that I don't know her or her books. I hope she has high standing now in Australia. Although one is not naturally attracted to 'depressing' subject matters, I find a book can be on any subject if well-written. Where would you recommend I start Hels?
CLICK HERE for Bazza’s rubbish Blog ‘To Discover Ice’

How do smart women do these dumb things??? hehe... great joke.

Just think of Albert Einstein and his wife, Mileva Maric. They got the same excellent marks at uni in maths and physics, yet I cannot see much credit to Mileva for all the clever theories they developed together. Plus her promising career ended when she had three children. Eventually Einstein divorced her, left the family without much financial support, married his first cousin and emigrated to the USA.

start with Dark Places of the Heart (1966), set in the tough North of England after WW2. It was a bit too vigorously working class and depressing for me, but Stead certainly wrote well.

If you enjoy that, then read Letty Fox: Her Luck (1946). Stead displayed a complex woman having the usual struggles inside the patriarchy that tried to pin her down within a limited world vision. Tough to read, but once again, she wrote very well.