Maria Gorska (1898-1980) was born into a very comfortable Russian family somewhere in the Empire. After her mother and father divorced, her grandmother sent her to boarding school in Lausanne. Maria wintered with grandma on the French Riviera and summered in St Petersburg with her Aunt Stephanie and her millionaire banker husband. Two nice lifestyle standards for the teenager to aim for!

In 1914, Maria spotted a handsome man at the Opera and decided she would marry him; it turned out to be a lawyer named Taduesz Lemp­icki (1888–1951). Two years later they were married in fashionable St Petersburg with her banker-uncle providing the dowry. As Lempicki had no money of his own, he was delighted to marry this young lass. A year later, Taduesz was arrested by the Bolsheviks; Tamara bravely had him freed, flashing the officials with her charms and using the help of the Swedish Consul. The re-united couple fled to Paris, along with many other upper class Russians escaping the Revolution.

In Paris and now called Tamara de Lempicka, the refugee studied art with Andre Lhote, and enrolled at Academie de la Grand Chaumiere. She became a well-known portrait painter with a distinctive Art Deco manner. Quintessentially French, Deco was the part of an exotic, sexy, and glam­orous Paris that epitomised Tamara's living and painting style. Unlike Picasso’s random art, Lempicka’s style would be seen as Soft Deco i.e novel, clean, elegant and exact.

Montmartre was becoming too expensive and too crowded, so most artists gradually moved south. Mont­parnasse had wide boulevards and great light. And there were still many small court­yards. Paris was the centre of the world for art creation and the ideal meeting place for the artists - Lempicka, Jacques Lipchitz, Tristan Tzara and Piet Mondrian were near neighbours, producing a unique and colourful style. 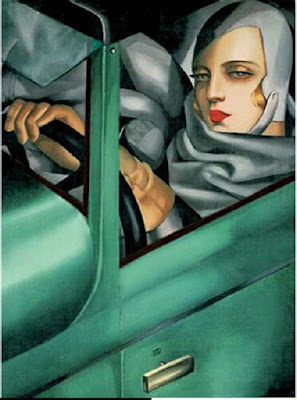 Young Woman in the Green Bugatti, 1925
private collection, Switzerland
Encouraged by necessity and the modern trends of people like designer Coco Chanel, the New Woman could drive a car herself.


, 1925
Th.
The flat and square dresses of the 1920s provided an ideal canvas to display Art Deco taste. Skirts were shortened and the female figure became formless and androgynous - the waistline dropped to the hips and did not return to its natural position until the 1930s. Nylon, satin, silk and crepe were the most popular materials used to make shaped dresses. Short tubular dresses, long cigarette holders, cloche hats, bobbed hair, plucked eyebrows, bands of diam­ond brace­lets and long, hanging earrings were loved. Social­ly it was the age of the Flapper, a young woman who went to parties without a chaperone, smoked cigarettes and drove cars. Tamara Lempicka made it her own.

In Portrait of Madame M 1930 (private collection), Tamara demonstrated her fashionable sense, sleek and seductive. Some cur­v­es were back and they were emphasised by the use of fabrics cut on the bias. Early on hemlines dropped to just above the ankle and remain­ed there until WW2. Neck­lines were lowered; shoulders were squ­ared. Dress waists returned to the natural waistline. Fuller skirts were accentuated a small waist and min­imised the hips. Dress bodices were designed with inset pieces and yokes. Necklines were dr­amatic, with wide scallop-edged or ruff­l­ed collars. Skirts were also designed with great detail. Upper skirt yokes were used, design­ed in a v-shape. The skirt bottom often had pleats or gathers. 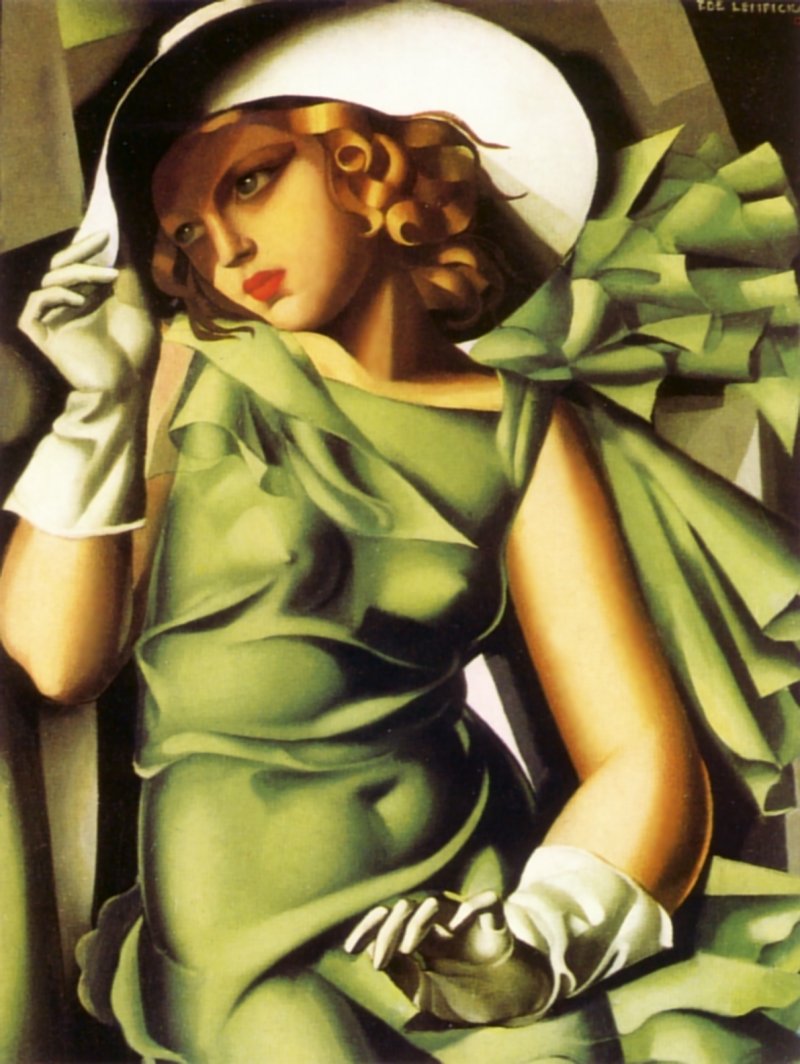 Hollywood and F. Scott Fitzgerald popularised sporty outfits for golf, ten­nis, swimming; similarly clothes and hats were designed for travelling in ships, trains or motoring in streamlined cars. With freedom of move­ment a priority, designers such as Elsa Schiaparelli, Jean Patou, Madeleine Vionnet and Gab­riel­le Chanel created style for the modern wo­m­an in the fashion capital of the world, Paris.

Tamara de Lempicka definitely moved in smart and intellectual social circles! In the 1920s she became closely associated with some of my all-time favourite women in the inter-war literary set, especially Vita Sackville-West and Violet Trefusis. It probably didn’t matter to Tamara that her husband divorced her in 1931 in Paris. 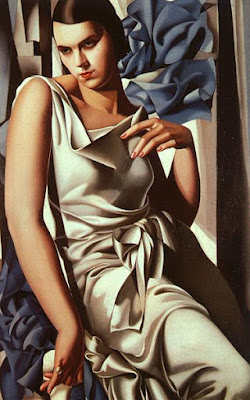 Being a bisexual woman, de Lempicka's works reflected a glorification of the female form. From the pages of women's magazines to the salons and counters of emporiums to the set of design of Hollywood films, the Art Deco style was used to market modernity and elegance. Tamara sold her portrait art to the rich aristocracy of Paris and fetched huge prices. She painted portraits of writers, entert­ainers, artists, scientists and many of Eastern Europe's exiled nobility.

de Lempicka had 3 fashion imper­at­ives: simple cubist lines, as in Woman Wide Brimmed Hat 1934; clear, glowing colours; and a strong int­er­pretation of the female form. She was the demonstrator of the female form in 1930s Art Deco cloth­es - sleek and seductive, abstract-ish and modern.

de Lempicka herself received acclaim for her cool Garbo-esque beauty, her parties and love affairs. Her beauty and opinionated nature also increased her celebrity. Her style only declined as conservatism started to challenge the feminist advances she had championed. The Art Deco woman, that was once an object of desire, was seen to regress toward demeaning caricatures of unbridled sexuality.

In 1934 de Lempicka married Baron Raoul Huffner (1886–1961), one of her earliest and wealthiest patrons and a recent widower. When WW2 broke out, the couple moved to Beverly Hills in America, and she became the Favourite Artist of the Holly­wood Stars.

The Baron and Tamara moved to New York City in 1943, and continued painting in the old style for a while. Tamara decorated the apartment with the antiques she and the Baron had rescued from his Hungarian estate. And when the war was over, she reopened her famous Paris studio in the rue Mechain. 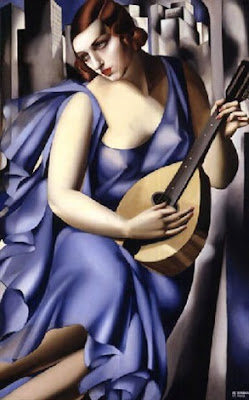 Tamara de Lem­picka was a true icon of the inter-war era, a woman of great beauty, great tal­ent and notorious sexual tastes. Her paintings were glossy, elegant, jazzy and chic like fashion photography in the magazines of the time. And better still, her successes as an artist funded a great hedonistic lifestyle. Her portraits of writers, entertainers, artists, scientists, industrialists and Eastern Europe's exiled nobility will last forever.

It took until 1966 for Musee des Arts Decoratifs to mount a commemorative exhibition in Paris, re-creating a serious interest in Art Deco. And Alain Blondel opened Galerie du Luxembourg and launched a major retrospective of Tamara de Lempicka. But it was too late in her career. In 1978 she moved to Mexico and died in 1980.

In 2009 masked gunmen stole art from a Dutch museum. Police said several robbers threatened a guard with a gun before making off with two paintings. The rob­bers a work by surrealist Salvador Dali. And they took La Musicienne 1929, a de Lempicka oil painting that showed a woman in a vivid blue dress playing a mandolin instrument. It had been a treasured painting.

Hello Hels, Lempicka truly represented the feeling of the Art Deco Era. I can imagine her portraits used in advertising or magazines of the era, something more difficult to imagine with, say, John Singer Sargent portraits, elegant though they are.

It is amazing how coincidences abound. Seconds before reading this post, I was noting a quote by Violet Trefusus, her collector's lament, "I don't like museums--there is nothing to buy!"
--Jim

These women were not fragile, were they. I can easily imagine them driving a car by themselves, playing golf or going on exciting cruises.

Violet Keppel Trefusis won my heart in a completely different context, in the circle of women writers. Violet was the daughter of Alice Keppel, Edward VII's mistress. Violet and Vita Sackville-West loved each other, even after their respective marriages. Once the women eloped to France but in 1921 Violet returned to her husband Denys Trefusis. Sackville-West only broke off the relationship when she heard that Violet Trefusis had been involved sexually with her own husband! Nonetheless the two women were devoted to one another for ever.

Look when Tamara de Lempicka became close to the inter-war literary women, especially Vita Sackville-West and Violet Trefusis - the 1920s! This was in both Britain and France!

Compare the slim Art Nouveau women from the 1890s. They were more inspired by delicate floral motifs, rather than by 1930 cars.

I have paperback copies of two Ayn Rand novels, both with Tamara de Lempicka paintings on the covers. I think it's the first two you have shown (can't be bothered to walk across the study to check!) I always thought they were absolutely the perfect choice and they would suit any F. Scott Fitzgerald novel as well.
I bet she had a copy of The Well of Loneliness on her bookshelf.
CLICK HERE for Bazza’s unimaginable Blog ‘To Discover Ice’

Why was Lempicka chosen? Perhaps because her portraits showed self assurance, good looks, modernity and intelligence.