The Fairy Penguin once bred all along the southern Aust­ral­ian coastline, and were an important food source for the indigen­ous population. They were also eaten by early European settlers, sealers and whalers in the early 1800s. Sadly British settlers also introduced large numbers of rats, dogs, cats and foxes many of which became wild and preyed on the little penguins, along with many other native species.

There were records of the penguins at Warrnambool’s first fully manned lighthouse station which was built in SW Vict­or­ia in 1855. But my first contact with the story started with the tv programme Coast Australia, with Scotsman Neil Oliver.

In Middle Island, off the coast of Warrnambool, red foxes had been decimating small colonies of Fairy Penguins. Normally Middle Island was cut off from the mainland for most of the year, but when the sandbar to the island became bigger during some months of the year, red foxes could walk across at leisure. When a newspaper article exposed how the endangered penguins were being killed en masse in 2004, a local chicken farmer became very alarmed. 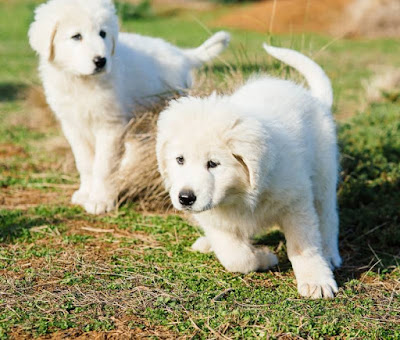 Allan Marsh, known locally as Swampy, had already bought a maremma dog to protect his chickens from the marauding red foxes. So then he got the idea of using dogs to protect the Fairy Penguins. In 2000 there had been hund­reds alive and thriving; by the 2004-5 summer, only four penguins were left on the island. Dead penguin carcasses lay everywhere, chewed up by foxes. Extinction of the island colony was imminent.

Marsh believed that his faithful maremma dog Oddball could protect the few surviving penguins. Indig­en­ous to central Italy, particularly to Abruzzo and Tuscany, the maremma is a breed of dog that protects livestock. These self reliant dogs have a solid, muscular build, thick white coat and large heads, and have been used for centuries by Italian shepherds to bond with the sheep and guard them from wolves. The Fairy Penguins are normally found in the ocean, but they breed on land and live in burrows dug out in the sand. So the maremma dogs would be perfect because they are light-footed and would not disturb the penguins nests.

Warrnambool City Council told the chicken farmer that dogs were not allowed on Middle Island, because the dogs would be more destructive than the foxes. So Swampy had to wait until someone new started work­ing at the council before he could take the plan any further. Then it happened! Warrnambool conducted the world's first trial using a maremma to guard the dwindling penguin population, starting in 2006. 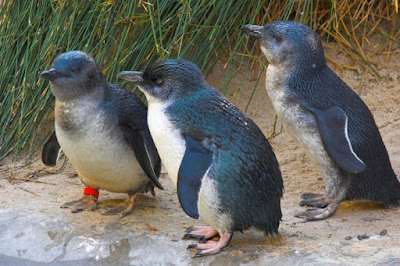 Oddball originally went to the island for three weeks but she became homesick and swam home. Then her maremma-aunt Missy was sent out there, but she also swam home. Swampy finally managed to get the authorities to see that they needed two dogs on the island, to prevent loneliness.

Maremmas clearly showed an exceptionally strong sense of territory. They focused on guarding their territory on the island and were simply tolerating the penguins. But when a fox tried to invade the dog’s territory, there was a great deal of barking, biting and not a few fox deaths.

Warrnambool City Council and Deakin University quickly formalised the Middle Island Maremma Project. Once every two weeks during the breeding season, a group of volunteers looked for the penguins on Middle Island to count them, in front of film crews from many countries. Middle Island's current maremma guards, Eudy and Tula, live on the Island for a week at a time and are famous everywhere.

The penguins are now thriving and are back up to a population of 250. The island seems to be fox-free. These successes not only triggered internat­ion­al media interest, but stirred the scientific commun­ity. Scientists from Deakin University’s Warrnambool campus have presented lectures on the project at Oxford University several times. And publication in a scientific journal will make the project story available to an even wider audience.

The maremma project won the 2010 Australian Government Coastcare Award. And tourism started to increase. When not on Middle Island, the dogs live at Flagstaff Hill Maritime Village in Warrnambool, so tourists can meet the maremmas there. Middle Island has been closed to the public since 2006, to protect burrows, penguins, penguin chicks and eggs from human trampling. But it will be possible to join small, guided tours in the southern summer (December-April) at low tide.

And soon international media outlets wrote or filmed the island and dogs. One film crew arrived in 2014 to film scenes for a cinematic production called Oddball which was released in 2015. In the film, Shane Jacobson was the actor starring as the chicken farmer and Oddball’s grandson starred as Oddball the dog. 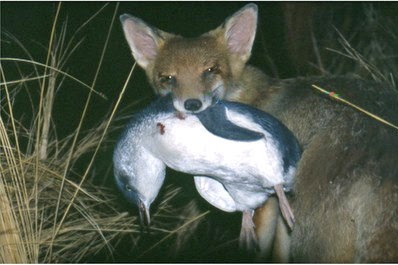 While using maremma sheepdogs to guard an endang­ered species has not been common, some breeds of livestock guarding dogs have long been apprec­iated by environmentalists. Those dogs made it possible for livestock to coexist with predators such as wolves and coyotes, reducing their predation by at least 75%. Now there is a Wombat Rescue organisation in New South Wales that uses a maremma to help tend and protect rescued wombats.

Hello Hels, A cute story with a happy ending! One wonder is the chief problem is that people have let populations of many animals like the fairy penguins get so low that they cannot naturally survive without some kind of assistance. I imagine that so much of the coastlines has been used up or altered that the penguins will never return to their old numbers, and thus continue to need the assistance of both Maremma dogs and also the right kind of people.
--Jim

It is ironic that an imported animal (the Italian maremma) is being used to protect an endangered native species (Australian bandicoots) from an imported threat (European foxes). The only population of bandicoots in the wild is in Tasmania, so maremmas are being trained to preserve the endangered survivors.

Hi Hels. Are those Fairy penguins the same as we would have seen on Philip Island? Those are very well protected! I suppose the foxes are only doing their thing. We have plenty in the UK and they move nearer to the centre of London every year. Several families have squatted under our garden shed before the babies grow up and move on.
I suppose the new population of penguins has a limited gene-pool so they will still be at risk with such small numbers.
CLICK HERE for Bazza’s quidnuncic Blog ‘To Discover Ice’

The Maremma puppies are so cute! I did not know about this bread of dog. The fairy penguins are small and cute as well. Glade the population of penguins are growing.

native animals and plants will always suffer when exotic animals are brought in, intentionally or on purpose. Small helpless animals all over the world, like penguins, have no chance whatsoever of surviving. But why did it take so many decades for the right people to be heard?

I had no idea that a] the only Australian population of bandicoots left alive in the wild is in Tasmania and b] that Werribee Open Range Zoo is training marremas to protect and save bandicoots in special circumstances. Many thanks.

right... foxes do their own thing very efficiently :(

I am appalled to hear that foxes are moving towards the centre of London :(

good to hear from you from OS. Going well?

The Maremma puppies are very cute! I chose a photo of puppies because they are even cuter than adult dogs but mainly because maremmas can only save the penguins (or wombats etc) if they are trained from a very early age.

Once a guest blogger asked me how her blog post did in terms of reader numbers. I told her she did very well indeed, but not nearly as many readers as my post on labrador puppies got :)

Those penguins are so cute, I am glad that they were saved from extinction :-)

Everyone loved Rudy :) And the post on labradors really did receive a tremendous response in this blog. http://melbourneblogger.blogspot.com.au/2009/08/origins-of-guide-dogs-for-blind.html

Thinking back, that post highlighted the difference between dogs being beloved lazy-ish family pets and dogs being intelligent and useful. Our canine friends can lead wonderful lives, training as guide dogs, therapy companions, police sniffers and now protectors for endangered species.

agreed. There were many mammals, birds etc that once thrived on this continent and are now extinct (eg Lesser bilby, Tasmanian tiger) or limited to endangered localised habitats (Leadbeater's possum).

The fairy penguin was not extinct across Australia, but the Middle Island population was down to the last four animals. I am also delighted the Middle Island penguin population is growing again and that other endangered species will hopefully be protected by the maremmas in other parts of the country.