Every reviewer should declare his/her interests in a topic before typ­ing the first word of the review. So here we go. Firstly my husband and his entire family were Czech. Secondly I regularly lecture on both “Habsburg Art and Architecture” and “Vienna’s Jewish History”. It is my working hypothesis is that there will never be a more scholarly, more art­ist­ic, more literate or more musical community than there was in Vienna between 1880-1933.

So I was a bit concerned to read Simon Winder saying that the Empire was “the plural, ar­ch­aic, polyglot Europe once supervised in a dizzying blend of inept­itude, viciousness and occasional benignity by the Habsburg family”. The only ruler that Winder showed respect for was Emperor Rudolf II, my long time favourite among the Habsburgs. Rudolf II moved his court from Vienna to Prague on becoming emperor in 1583, and made it a great centre of research and alchemy.  He maintained scientists (especially astronomers and alchemists), goldsmiths, antiquarians, historians, artists and exotic beasts on the royal payroll.


The rest of the Habsburg rulers were unhealthy (probably as a result of ruling males marrying their nieces to keep the blood line pure), constantly involved in military campaigns, constantly worrying about rivals within the family, brutal to animals and probably to humans as well, obsessed with religion and concerned with magic. 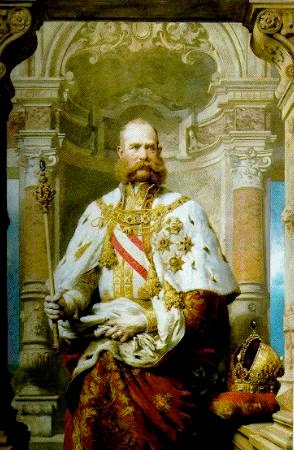 Yet from their rise from C13th obscurity, they became one of the st­rongest and most long lasting of dynasties, dominating nations across central and southern Europe. The dynastic chart of Habsburgs down the wall looks impressive. Starting with Rudolf I of Germany, King of the Romans, we move on to Frederick III, who titled himself Holy Roman Emperor in 1452. His family inherited this title and later added other titles of their own.

The empire that had started in lands along the Danube expanded ambit­iously across Germany, Central Europe and points east. Strategically locating Vienna as the centre of the empire, the faithfully Christian Habsburgs had many enemies. Their biggest ongoing worry were the Muslims in the Ottoman Empire. And the Russ­ians. And the French under Napoleon. But even within the Habsburg Empire, the Catholics clashed violently with their Protestant citiz­ens during the 17th century Thirty Years War. It was all horrific.

Danubia: A Personal History of Habsburg Europe is a big book. Happily once we get to 1848, the year of revolutions all over Europe, the book becomes much more balanced and, I think, more interest­ing. The 53 million people under Habsburg rule spoke German, Hung­arian, Moravian, Polish, Yiddish, Bulgarian, Croatian, Czech, Slovakian, Romanian, Serbian, Ukrainian and some Italian. They were Catholic, Protestant, Jewish, Orthodox and Muslims. And yes, I am certain they all disliked the Habsburgs. 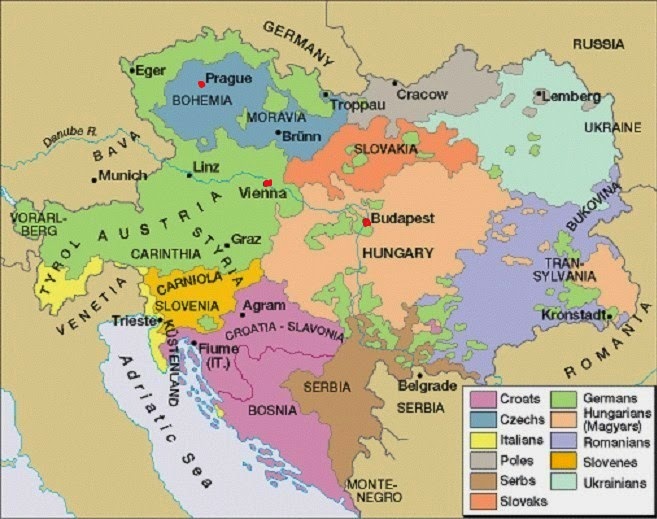 Map of nationalities with the Habsburg Empire (undated)

But I am not sure if Winder explained how the later Habsburgs came to be regarded as the liberals who had successfully managed many nation­alities, with cultural tolerance and support. After 1848 schools and univer­sit­ies thrived, theatres and concert halls opened, musicians and painters became internationally famous, quality newspapers and books were published, coffee culture blossomed, architecture became gorgeous and decorative artists created masterpieces. For decades citizens believed that Emperor Franz Joseph was the most principled, liberal and culturally supportive leader anywhere.

Of course empires come and empires go. And we can say that by the early 20th century, the once-indomitable Habsburg Empire was already fading. But when Archduke Franz Ferdinand’s met with Mr Princip in 1914, the unexpected death that launched WW1 did not, by itself, predict the Habsburgs’ imminent end.

It was only in 1916 that three events happened: a] World War I raged on catastrop­hic­ally, b] the national independence movements within the Habsburg Empire were succeeding and c] Emperor Franz Joseph died, after a reign of almost 70 years. By 1918 the new Emperor Karl abdicated and new nation states were established in the former Habsburg territories. Few people seem to have bemoaned its passing.


What does a personal history mean? A focus on the author’s an­ces­tors? A record of the author’s travels throughout the lands of the old empire? A less rigorous documentation of proper historical sources? Winder’s book is a mixture of formal history, travelogue and informal personal comments. I do not like chatty history and would not ask students to buy Danubia as their formal text book. But Winder covers the subject so comprehensively that I hope students cherry-pick chapters for colourful background material.

Simon Winder's book, Danubia: A Personal History of Habsburg Europe, was published by Picador in 2013

As you may imagine, the history of 'Danubia' holds a great fascination for us although we must confess that it is the latter half of the C19 and C20 which holds the most intrigue. Indeed, we were only talking today to a Hungarian friend about the Transylvanian Trilogy by Banffy which gives another view of recent Hungarian history and lands that were in Greater Hungary before Trianon.

The Habsburg Empire was incredible in so very many ways, not the least of which was its capacity to rule over so many different countries with their plethora of languages and cultures. We are not sure that we should have the stamina to cope with the entirety of this mammoth work, but cherry picking may well be to our taste!

we know that writing history is in some sense always a personal vision. But I wonder what this book might have looked like, had the historian been eg Czech, Hungarian or Serbian, instead of British

The last emperor, Karl, had died in exile but his widow had been active in monarchist politics throughout the 1930s and their son, Crown Prince Otto, was a vocal opponent of Nazism. To read how the British Royals helped arrange the Habsburgs' evacuation from Austria in 1919 and later to Canada, see Confessions of a Ci-Devant,
http://garethrussellcidevant.blogspot.com.au/2014/08/the-eagle-and-maple-leaf-austrian.html

Hello Hels, Historians always have some kind of bias, but 'personal histories' while not always useful as principal sources, can yield charm as well as individual viewpoints, often bringing minor events into focus. These books are probably the first cousins to travel literature, especially the type that was done so well in the 18th century.
--Jim

agreed. If I had thought of the book as well researched travel literature (across time and geography), I would have been far happier.

I look forward to the time when I am free to study the Empire in greater detail. I had little knowledge about the Habsburgs before we went to Europe, and I now know enough to know I have little knowledge of such an intriguing period of European history.

yes yes yes always... the more reading before a person travels, the better. Most of my stories about Czechoslovakia and Hungary came from my mother in law, so I was quite surprised to find that there were other stories to be read :)

many thanks. I followed up Bloch's review and found it to be very useful. But I wonder if the problem was simply created by the mix of nationalities.

As it became increasingly obvious towards the end of the empire, the Habsburgs' insistence on controlling the mix of unwilling nationalities under ONE CENTRALISED RULE was doomed to fail. The Habsburgs understood that problem with Hungary and responded appropriately, but not with the other nationalities.