Royal Albert Hall or The Proms - which came first?

Prince Albert, the Prince Consort, was delighted with the success of the Great Exhibition at Crystal Palace in 1851, and envisaged a lengthier list of facilities that would uplift the Great British Public via the arts and sciences. The South Kensington estate was in fact developed on land purchased with the profits of the 1851 Great Exhibition.

Alas Prince Albert died in 1861 and in her grief, Queen Victoria asked for large projects that would fulfil Albert’s dream and mem­or­ialise his contribut­ions to British society. Although I am not a huge fan of C19th Gothic, the queen loved the Albert Memorial in Ken­sington Gardens. This statue-monument, designed by Sir George Scott in a Gothic Revival style, was opened in July 1872 by Queen Victoria. 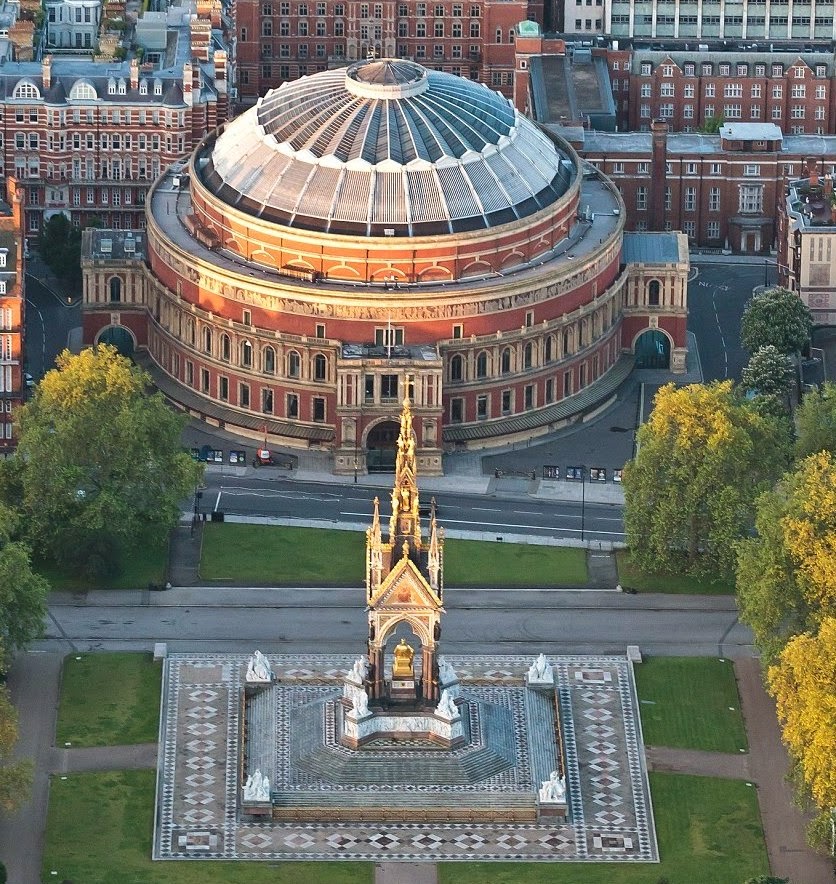 Albert Memorial in the foreground

Royal Albert Hall in the background.
Both in Kensington
Photo credit: Daily Mail

Directly opposite the monument is Royal Albert Hall, also in South Kensington. It was Henry Cole, Prince Albert’s collaborator on the Great Exhibition and a champion of the arts and sciences, who pushed the building of the great hall along. Said to be inspired by Cole's visits to ruined Roman amphitheatres, the design and solidity of the Hall were in actually simpler than originally intended, given that much of the money earmarked for the construction had been diverted to the building of the Albert Memorial. How unfortunate.

Nonetheless the auditorium inside is huge, covered by a domed skylight of painted glass, wrought iron girders, fluted aluminium panels and large fibreglass acoustic diffusing discs. The centre can seat 6,000 guests while another 2,000 can be added at the top of the hall, in the space taken up by the surrounding gallery. And the exterior, presumably inspired by the red brick and terracotta architecture of Northern Italy, is impressive. Queen Victoria loved the long terracotta frieze composed of allegorical groups of figures, all involved in artistic, scien­t­ific or cultural activities. The figures reminded her of Albert at the height of his powers. 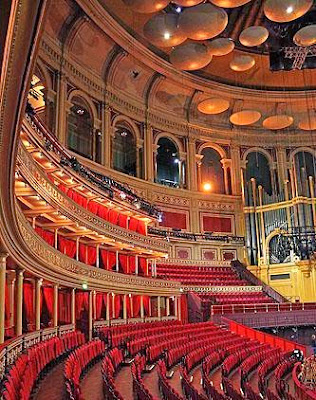 At the opening of this concert hall by Queen Victoria in 1871, she naturally selected a name for the building that would hon­our her adored late husband. Thus by 1872, both parts of the national memorial to Prince Albert were in place.

I knew all about the much loved British institution called The Proms, a series of concerts held every year from mid July. But I had no idea when The Proms started. Perhaps the Proms started at a site other than the Royal Albert Hall, and only moved there after 1871.

No! There seem to have been two men responsible for The Proms, accord­ing to the BBC. Henry Wood had quality musical training and was succ­ess­ful as a pianist & conductor. Impressario Robert Newman was manager of the newly built Queen's Hall who had already organised symphony orchestra concerts at the hall. Newman wanted to reach a wider audience by offering more popular musical programmes, adopting a less formal promenade arrangement, and keeping ticket prices low. And in 1895 they got together to launch the first Proms season, with Henry Wood given the conductor's baton of a permanent orchestra at Queen's Hall. So The Proms started in 1895, 24 years AFTER Royal Albert Hall opened. 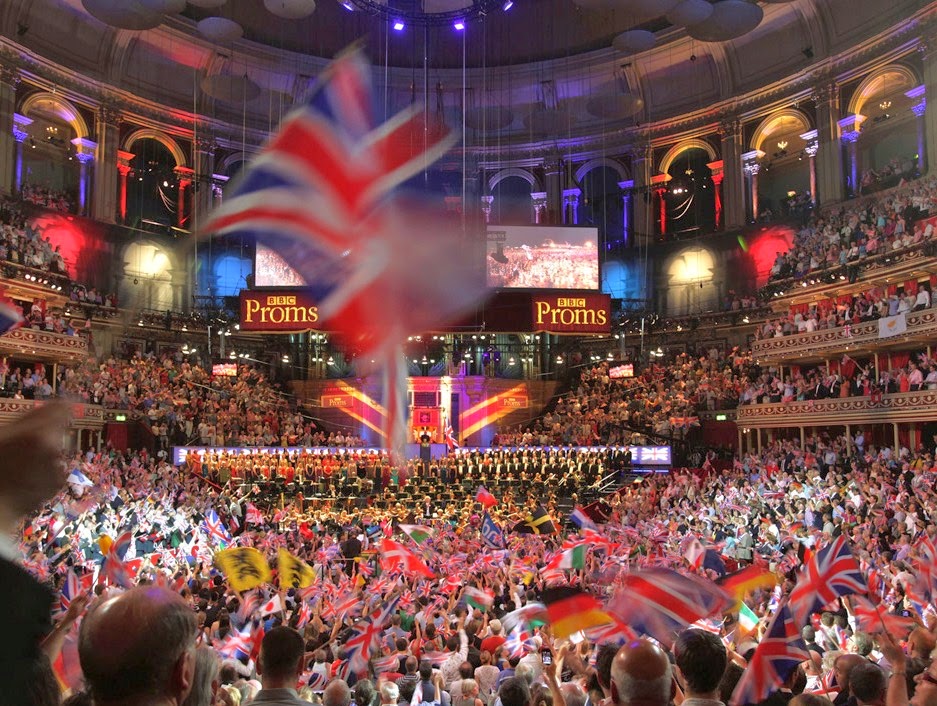 I am not sure why the BBC took The Proms over, perhaps for financial reasons, but we can definitely say that the BBC Promenade Concerts were founded in 1930. Tragedy struck in May 1941 when the Luftwaffe bombed Queen's Hall. The only other hall available in London for orchestral concerts was the Royal Albert Hall, opened as we noted in 1871. Thus The Proms took place in Royal Albert Hall in 1941 and have run continuously ever since.

Today The Proms Season includes 70 concerts, a different concert for each night; the greatest excitement is probably reserved for Edward Elgar's Pomp and Circ­um­stance March, to which Land of Hope and Glory is sung. The Last Night of The Proms is the biggest night, including for us in Australia. On Saturday 13th September 2014 there will be flag flying and nationalist sentiment. complemented by the final song, Hubert Parry's Jerusalem. All the audience will pelting it out in good voice.

In 2005 we were on our way to, I think, the Natural History Museum. Look, there is an impressive 'thing', which was of course the Albert Memorial. Slowly it dawned on us that the big round building was Royal Albert Hall.

A very interesting bite of its history, thanks, but no thanks for the two pieces of music that will be running around my head today.

I have been a promenader in the long distant past (!) though not to a Last Night as tickets are so hard to obtain. However I love the last night of the proms and usually watch it live in front of the TV. Yes - singing along to the tunes and songs I have known and loved since childhood but so rarely heard these days on any other occasion. But sadly in the last few years the programme has omitted Henry Wood's rousing 20th century "Fantasia on Sea Songs" with the wonderful hornpipe that the promenaders bobbed up and down to as it got faster and faster. Apparently this was done in order to "tone down the nationalism" of the last night. Instead we have Ansell's 19th century simpering "Plymouth Hoe". My children who all live on the other side of the world also love to watch the proms, but despair with me.

Did you get into the Hall for a tour, even if there was no concert or other event going on inside? I know what it is like, having limited time in a big city. You always have to make choices about what to see and what to miss.

*nod* nationalism is often such a divisive and destructive emotion. And I don't just mean Nazi torch light parades with millions of people.

What a shame. The excitement that comes from loved rousing music, large crowds and heaps of colour is a rare and special thing in our lives.

There are two programmes I would have liked to attend - Battle of the 1930s Bands, and Barenboim playing Mozart and Ravel's Spanish Music. But the tickets are not cheap, except for day tickets.

If money was no object, I would get the best seats in the house for The Berlin Philharmonic next week. Their first concert will be Rachmaninov's Symphonic Dances and Stravinsky's Firebird (5th Sept) and the second will be Bach's St Matthew Passion (6th Sept).

Hello Hels, Although Henry Wood's name is permanently linked with the Prom concerts, when exploring late 19th century music one constantly reads about him, often as accompanist or conductor to the greatest musicians of that era. He thus was the exact person to raise the Proms to such a high standard.
--Jim

In days gone by when we lived closer, the Proms were a summer pilgrimage for us. We would sit in the gods for next to no money and enjoy the most sublime of music. It is a highly charged atmosphere with a great sense of delight, a wonderful institution we feel.

This year, the Budapest Festival Orchestra played at the Proms to great acclaim.

I often wonder what makes one musical (or literary, artistic or theatrical) programme last for a very long time whereas many fade within a few years. Henry Wood was clearly the right man for the right time in 1895, followed by exceptionally gifted Prom conductors in the decades that followed.

it really IS a highly charged atmosphere with a great sense of delight, created by a special combination of architecture, conductor, group of musicians, colour, crowds and national excitement.

I am very pleased the musical talent comes from a wide range of cities, including Budapest of course. So let me brag about Melbourne for a second :)
"The Melbourne Symphony Orchestra makes its Proms debut under its Chief Conductor Sir Andrew Davis. Passion and despair, love and death, all feature in a programme that roams from the dark fantasy of Berlioz’s Symphonie fantastique to the soaring ecstasy of Strauss’s Don Juan, while Elgar’s Cello Concerto adds more delicate shades of melancholy and yearning".