Tilar Mazzeo traced the history of the Hotel Ritz, a cultural landmark that opened its doors in fin de siècle Paris (1898). I found the hotel's story fascinating since Cesar Ritz, Auguste Escoffier, Capt Dreyfus and Marcel Proust already appeared in this blog. This hotel was soon full of mod­ern artists and intellectuals, and wealthy or well connected ex-pats who seemed to live in central Paris full time.

1898 was a big year! Paris was split by the Dreyfus Affair, dividing the aristocracy and traditionalists from the new Belle-Epoque artists and intellectuals. The author used Marcel Proust as an example of one of the supporters of Captain Dreyfus, supporters who claimed the Ritz as their home.

Undoubtedly the Hôtel Ritz was always the affluent, sexy centre of Paris. And no era in this book was more fascinating than the 1930s, a time when the avant-garde of the arts mingled with nobility and their entourage.

So it seems extraordinary to me that the hotel would decide to remain open, at the very moment that 300,000 German occupiers were taking over Paris in June 1940 and two million Parisians were fleeing south­wards. Madame Ritz knew that if she left, she may never get her hotel back; she decided to take advice to stay open, with the help of her Swiss Director, Claude Aurcello. Thus the Ritz remained "A Switzerland in Paris" throughout the war.

At least Madame Ritz managed the hotel well, and she did provide luxuries and distractions to Nazi officers. The Nazis indicated they were guests of the French people, and having obtained a 90% reduction in the hotel tariff, sent their bills to the puppet government in Vichy. Very comfortable guests, at that! Occupying the hotel’s fabulously opulent Imperial Suite was Luftwaffe chief, Reichsmarschall Hermann Göring.

Were French citizens anxious about collaboration with the occupiers back in 1940? Are they now? Did they mind that 850,000 French civilians and soldiers died for France, while German officers were nibbling caviar in the heart of Paris? 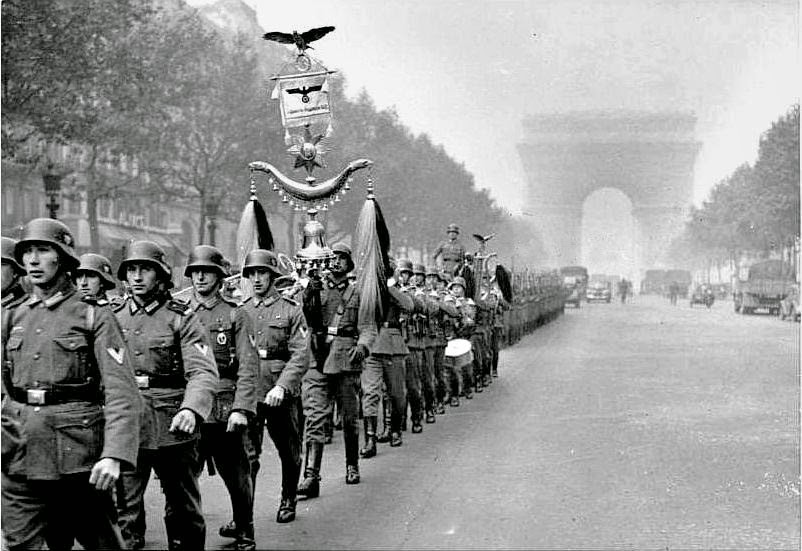 Of the decades covered by this book, I was most interested in the Nazi occupation era. The hotel seemed to function peacefully because there were separate buildings conn­ected by a long corridor. This provided a natural partition between the German officers on one hand, and the smaller building which remained open to the public on the other. Mazzeo made it clear that there were no uniforms or weapons in the public spaces, enabling the French and Germans to mix amicably. She also made it clear that neutrality could often cross the line into collaboration.

Readers have been fascinated by the guests’ dangerous liais­ons, espionage, defiance and treachery. Note that the book’s sub-title is “Life, Death and Betrayal at the Hotel Ritz in Paris”. How could it have been otherwise when the one hotel was both headquarters to the highest-ranking German officers AND home to exclusive, cashed up French patrons. And British royals, like the Duke and Duchess of Windsor. Plus it was a base for spies from both sides who could be hidden among the Ritz’s military or civilian residents.

I do not pretend to understand France’s relationship with the German occupiers in WW2, so it is difficult to know what to make of the Happy Collab­orationist Theory. Were the collaborators truly pro-Nazi or just trying to live decently as best they could? Did the old witnesses who spoke to Tilar Mazzeo not remember the war years clearly enough or did they lie to the author? How many well estab­lished, financially independent Frenchmen actually helped the Resistance? This era provided a rich, messy history, “a breathless exposé of French horizontal collaboration”. Nothing could be taken for granted. 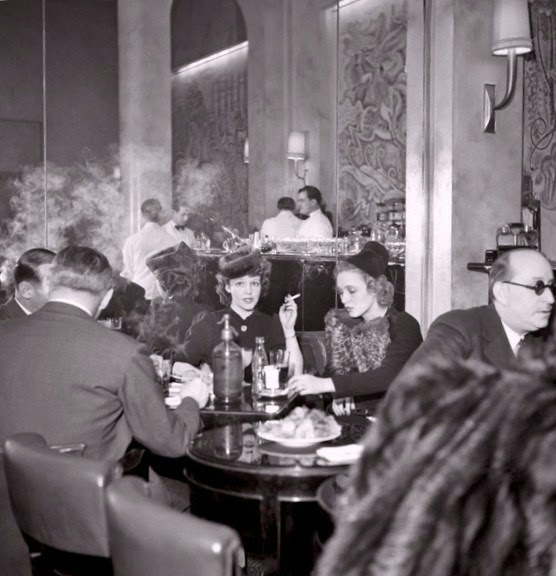 Some people had a very comfortable war at the Ritz
photo credit: Vanity Fair

In mid 1944, just before the liberation of Paris, well-known French citizens were very an­xious about their wartime love affairs becoming public knowledge eg actress Arletty had loved her Nazi lieutenant Hans-Jürgen Soehring; Coco Chanel had her German lover Baron Hans von Dincklage. Americans were more excited than anxious. Imagine Ernest Hemingway macho man’s race to secure the Ritz stories first. And imagine the many female reporters like Martha Gellhorn (Hemingway’s sometime wife) and Lee Miller, who had their own stories to tell.

The book is strongest after the German Occupation ended in August 1944. For example the book has amazing and presumably secret information about the Duke of Windsor’s plan to wait for his brother King George VI to die and for Edward to grab his throne back.

Justice was swift for French women accused of collaborating with the Germans. And for those living throughout the war in extravagant luxury. It is the only opportunity for the modern reader to discover how Parisians felt about those who lived in war time luxury, while the rest of Paris was starving.

Of course Paris in the Belle Epoque and inter-war era had always been full of messy scandal, and the Hotel Ritz even more so. So inevitably this war-time story jumped around. Other reviewers have seen the book as just a gossipy history of Nazis, writers, artists, spies, war corres­pondents and fashion designers. They wanted a stronger sense of order to the seemingly endless material. I would like the early chapters published in a separate volume, leaving more space for the 1940-44 era. Of the 292 pages in the book, only 11 pages were solely dedicated to the vital Occupation years.

Tilar Mazzeo's book, The Hotel on Place Vendome: Life, Death, and Betrayal at the Hotel Ritz in Paris, was published by Harper in 2014.

We all form opinions on morally troubling matters, but in the case of the collaboration, I don't think we can real judge from such distance and I am more inclined to note how people felt at the time.

My total knowledge about Paris came from Ernest Hemingway novels (A Moveable Feast, The Sun Also Rises). He loved Paris and he loved the Ritz. There may have been some drinking and sex happening.

absolutely so! If I had have been caught in a nation overrun by the Germans, I would have lied, stolen, carried fake papers, stowed away illegally to another country ...whatever it took to keep the family alive.

But those years have now been censored out of French history. I am finding it difficult to find histories, written in English at least, that discuss collaboration openly.

after the devastation of WW1, Paris was soon seen by everyone as the cultural capital of the world. Not only for creative French speakers but for English, Russian, Italian and French speakers... whoever could find the money to get there. Hemingway must have never wanted to leave, so free was Paris' cultural vibe.

I was born in the wrong generation :(

Hello Hels, It would seem that there were many Parisians who were content to fiddle while Paris burned. Also, I had thought that I could not think less of the Duke of Windsor, but this post managed to lower him another notch in my estimation.
--Jim


Anne Sinclair has written a new book called My Granfather's Gallery: Art and War. Helen you will love the topic and you will enjoy the summary in this morning's Australian

millions of Paris citizens did in fact flee, but I suspect life in the Vichy regime (July 1940-August 1944) to the south was not much better. The French government under Marshall Petain actively collaborated with Germany.

Re the Duke of Windsor, and Sir Oswald Mosley for that matter. Both of them were unpleasant men with unpleasant politics. But regarding the closeness to Hitler as a person, I blame their wives. Wallis Simpson Windsor and Diana Mitford Mosley were very very unpleasant.

thank you. I read the extract in The Australian and yes, I found all my favourite themes :) ... the German occupation of Paris, forced closure of Jewish art dealers, art being defined as Degenerate, art auctions etc.

The book will be launched soon, I believe.

Lee Miller is a rich subject for study. Plenty of images, one of her bathing in Adolf's tub with the rest of the apartment full of soldiers.

Oh yes...Lee Miller was amazing! I came across her when looking at Man Ray but she really came into her own as a correspondent and photographer for Vogue in France (1940-44). She was there at exactly the right time to capture all the important moments.

Don't say Germans but Nazis and don't worry French were collaborators even if suddenly at the liberation they all claimed to have been resistants.French people know quite well how to use the famous D system.
Margaux
PS: My grand parents were Jews and denounced by 'nice' neighbours. Both died in Auschwitz. My mother was 3 and grew up in a children home and her only souvenirs of her parents are some photos. So in France you had as evil persons as in Germany .

I understand your issue perfectly. I cannot tell from the book how the French _now_ think about WW2 collaborators-turned-resistance fighters. It is like a slightly unpleasant national secret that historians don't discuss very much.

Thankfully my own family was in Australia during WW2 but my husband lost his grandparents, aunts, uncles and almost every first cousin.

Hello again, I had forgot to note before that in your photo of the German occupation procession can be seen a Nazified Turkish crescent or jingling Johnny, an instrument I had featured in an early post:
http://roadtoparnassus.blogspot.tw/2011/09/jingling-johnny-puts-in-rare-appearance.html

well spotted sir! I have good eyes for detail, but since the concept of a jingling johnny is new to me, the instrument would have passed by totally unnoticed.

But that begs the question. Why do you think German soldiers would march into the French capital with a Turkish-influenced piece of equipment?