James Barrie (1860–1937) was the child of a Calvinist family of weavers from Kirriemuir in Angus, close to the Scottish city of Dundee. There were 10 children born to David Barrie and his wife Margaret, so I can­not see how the 10 people (two children died) could live in the two rooms of the white cottage that is now the JM Barrie Museum. Upstairs was the warm kitchen with its lovely food smells; it functioned as a bedroom for most of the children, while the parents and babies slept in the living room on the same floor. Downstairs the weavers’ loom and yarn store was the workspace for James’ father. A small brick washhouse opposite the home served the whole street during Barrie’s childhood.

Barrie left the family home and studied at Edinburgh Univ­ersity; soon he was writing drama reviews for adults for the Edin­burgh Evening Courant and articles for the Nottingham Journal. Yet his two Tommy novels, Sentimental Tommy (1896) and Tommy and Grizel (1900), were about a boy and young man with childish fantasies. And then his most famous character, Peter Pan, who was initially published in 1901. So we have to ask ourselves why a mature man would be drawing on childlike experiences to create rather strange, make-believe stories? 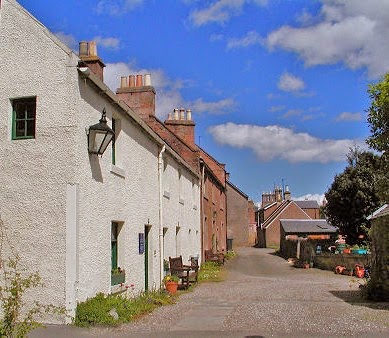 Barrie's childhood home in Kirriemuir
On the left, the house museum and the museum shop next door
On the right, the washhouse-theatre.

Discover Britain Magazine (July 2014) showed that when he was only 6, Barrie's 13 year old brother David had died in a tragic ice-skating accident. As David had been his mother's favourite child, the loss left Margaret Barrie even more devastated. Young James tried to fill David's place in his mother's love as best he could, including wearing David's clothes and sitting outside the mother’s bedroom for weeks on end, trying to stop her crying. Margaret constantly confused James with David, thus denying him his own individual identity. Yes, she eventually found comfort in the fact that her dead son would remain a boy forever, never to grow up and leave her. And yes, James went along with the delusions that brought her comfort! But he was only 6 years old ....what choice did he have?

Eventually Barrie and his mother read stories to each other from both their childhoods, favouring books like Robinson Crusoe or books that were written by fellow Scotsman, Sir Walter Scott. Margaret may have distorted James’ notions of everlasting boyhood, but she did help him decide that his future career was definitely going to be in literature. 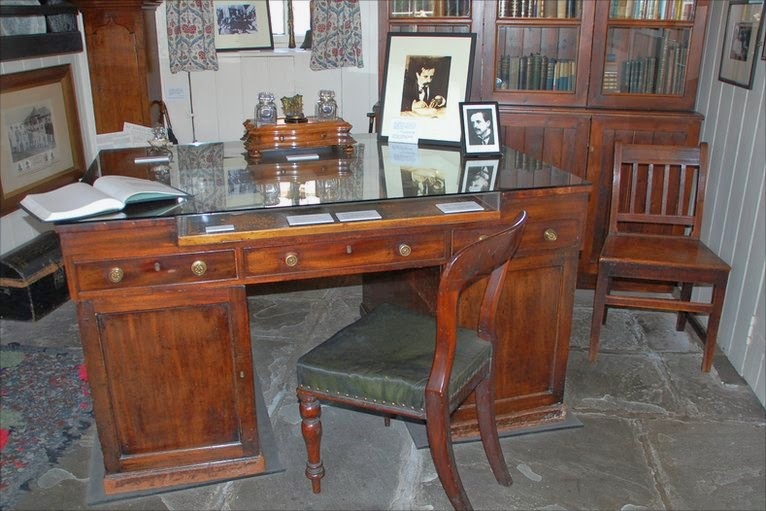 And there was an additional element of explanation. When Barrie moved to London in 1885, he met the Llewelyn Davies family with five sons who apparently inspired writing about a boy who had magical advent­ures in Kensington Gardens. The boys, who were the cousins of the writer Daphne du Maurier, were said to serve as the inspiration for Barrie's Peter Pan; in fact several of Barrie's characters were specifically named after the lads. Barrie definitely did became their legal guardian following the deaths of their parents in 1907 and 1910, and the five boys were publicly associated with Barrie and Peter Pan for the rest of their lives.

Peter Pan, or The Boy Who Wouldn't Grow Up, was a fairy play about an ageless boy and an ordinary girl named Wendy who had adventures in the fantasy setting of Neverland. Barrie wrote many other works and was given an imperial honour in 1913, but Peter Pan remained his best known and best loved character. 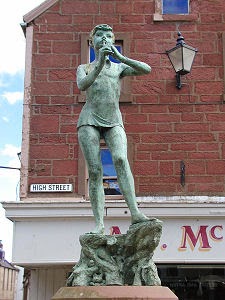 A statue of Peter Pan, opposite the house museum in Kirriemuir

When Barrie died in 1937 in London, he requested that his body by returned to the family plot in Kirriemuir cemetery in Scotland, alongside his parents and siblings. Today people on a literature pilgrimage can certainly visit the family graves. Then see the JM Barrie Museum at 9 Brechin Road is open Saturday-Wednesday inclusive from noon till 5 PM. The washhouse opposite the home was converted into a theatre in which to stage plays for the locals. The National Trust of Scotland opened the next door cottage at #11 Brechin Road as a visitor recep­t­ion area and shop. Plus the Trust created a garden opposite the cottage to encourage children to play outside, next to the Peter Pan statue.

A very odd man and a very odd story if you actually read it.

Perhaps Barrie's own very short height had something to do with it?

very very odd! Largely I blame his mother. In her endless grief, it sounds as if Margaret made young James quite disturbed himself. I wonder why the father (who lived till 1902) didn't save the children from their very disturbed mother.

But James, when he became an adult, had to take some responsibility for his own life. His marriage to Mary Ansell seemed to be lovely, sexless and of course childless.

If it is true, JM Barrie was a 4'10" little person, brought on by extreme distress in childhood. Decreased growth hormone secretion, stunted growth and immature skeletal age.

That may explain why he did not want to socialise with adults... only with children.

What an incredibly sad childhood…and surely whenever his mother saw him wearing his dead brother's clothes she would have burst into a fresh round of tears???

And yet, from such tragedy, a brilliant piece of literature history was born...

That is so true. Sometimes a terrible childhood can cripple a person in adulthood. But sometimes an adult can use his childhood pain to develop his creativity to a very high level. I am thinking of Charles Dickens, but we could easily say the same of James Barrie.

I loved your Barrie article, and was fascinated to learn the story behind his odd point of view. It reminded me to a degree of what happened to my favorite writer, Robert Benchley. When Benchley was small, his older brother was killed (in the Spanish-American War), and his mother blurted out, "I wish it had been Robert!"

By the way, there seems to be a typo in your post, in which Robinson Crusoe is attributed to Walter Scott instead of Defoe.

that reference has great photos that I had no seen before. Many thanks!

Do you agree with the assessment (in the article) that Barrie soon became one of England's most famous writers?

oops I corrected my sentence immediately - thanks to your keen eyes. I certainly did not want to suggest that Robinson Crusoe was written by Walter Scott.

Re Robert Benchley. If his mother really did say something brutal and insensitive to one son when her other, more beloved son died, I would hope it was only in the pain of the moment. If she had kept up the nightmare of attack on Robert for 7 years, as Margaret Barrie did, I would say that Mrs Benchley was also a very destructive mother.

I meant to say to you: James, when he became an adult, had to take some responsibility for his own life. His marriage to Mary Ansell seemed to be loveless, sexless and of course childless. Not lovely, at all :(

Now I am thinking of destructive mothering, no-one comes close to Queen Victoria, after Albert died. She tried to destroy her daughters' psychological maturity and independence, even when they were not living with her.