"a conspiracy of Christian goodness" in WW2 France

France had a mixed history when it came to its own Jewish community. Consider the splitting of France into the anti-Semitic German-occupied north and the anti-Semitic Vichy government in the unoccupied South (1940-42). Despite the heroic French Resistance in WW2, there is still an active debate about why the Vichy government allied itself with the Germans - out of an ideological commitment to Nazism? or for pragmatic reasons i.e to gain, with Nazi approval, full powers to replace the French Third Republic.

Overall I was interested to hear historians say that the Vichy government of the early 1940s represented "the revenge of the anti-Dreyfusards". Vichy officials were the sons and grandsons of those men who had wanted Captain Alfred Dreyfus exiled or executed back in the 1890s. 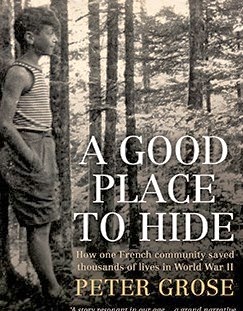 Of course I knew about the heroic American embassy official Varian Fry and his team. Despite the pro-Nazi Vichy regime, Fry and his small group of volunteers hid refugees in a safe home until they could be smuggled out of Marseilles. During 1940 and 1941 2,200 people were taken across the Spanish border and then to the safety of neutral Portugal from where they could make their way to the USA. Fry also helped others escape on ships leaving Marseilles for the French colony of Martinique, from where they could go to the USA. Fry was a hero, but he was not a Frenchman.

Now a book has come out called A Good Place to Hide: How One French Community Saved Thousands of Lives in WW2. Written by Peter Grose in 2014 (Allen and Unwin), it tells the amazing story of a brave Pastor Andre Trocme in Le Chambon Sur Lignon (in the isolated upper reaches of the Loire in southern France, 47 ks south of St Etienne) who said that godly Christians had to save human lives, to resist the violence directed at their consciences. He was supported by the church's second cleric, Pastor Edouard Theis.


As the publishers noted, the congregants kept their heads down, they kept their mouths shut and they stuck together to offer sanctuary and shelter to between 3,500 and 5,000 Jews. This is one of the great modern stories of unknown heroism and courage, a story of a community of small villages that conspired to save Jewish lives under the noses of the Germans and of Vichy France. Clearly the pacifist Protestant pastor who broke laws and defied orders to protect the lives of total strangers was a hero. 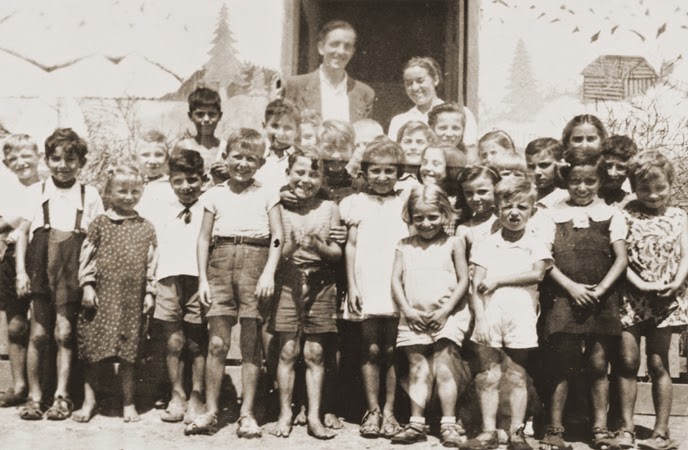 Jewish Children protected in Chambon
in a facility run by the Organisation to Save the Children  (OSE)
photo credit: Yad Vashem, Jerusalem

But so were the Quakers, the Children’s OSE and the Swiss Red Cross. It is the story of an 18-year-old Jewish boy from Nice who forged 5000 sets of false identity papers to save other Jews and French Resistance fighters from the Nazi concentration camps. And the story of  a glamorous female OSE agent with a wooden leg, who helped to arm and organise the Resistance on the Plateau Vivarais-Lignon; the 15-years-old schoolgirl whose parents tried to keep her out of harm’s way in Le Chambon, and who risked her life running suitcases stuffed with money for the Resistance; the 17-years-old Boy Scout who ran 20 missions escorting Jews to safety in Switzerland before joining the Resistance. And it is the story of ordinary citizens who offered sanct­uary, kindness, solidarity and hospitality to people in desperate need, knowing the possible consequences to themselves.

Money was collected to feed and house the refugees. Every train that arrived in Le Chambon was met, every refugee was identified and hiding places were assigned. Even those adults on trains en route to neutral Switzerland were given false papers. Not a single Christian citizen handed over Jewish refugees to the local police or to the Vichy soldiers.

There was a price to pay. In February 1943, French (sic) police arrested Pastors Trocmé and Theis, as well as the headmaster of the local primary school, Roger Darcissac, and imprisoned them near Limoges. The French authorities eventually released the three men and they continued to operate rescue activities until late 1943, when fears of re-arrest forced them into hiding. At that point, Mrs Magda Trocmé took over the leadership of the project to save Jewish lives.

More than 75,000 Jews were deported from France and executed by the Nazis. But not even one from Chambon! Chambon was one of only two towns in Europe named as “Righteous Among the Nations” by Israel’s Yad Vashem for saving Jews from Nazi extermination. One of two in all of Europe!!!! Then how did I not know this story, before Peter Grose’s fine book came out?

I heard Peter Grose on the ABC. He said that The Free Zone survived in Southern France until November 1942. It was ruled by Marshal Philippe Pétain's French Government, but it seemed a bit freer than the rest of the country.

Le Chambon was in The Free Zone in Southern France which lasted from June 1940 (when the Nazis and French cabinet signed a treaty) to November 1942.

I will ask Peter Grose if the Free Zone was any freer than other parts of France. This may have made Pastor Andre Trocme and Pastor Edouard Theis' task at least conceivable.

Thanks. It is a story well worth reading.

Vichy France during WW2 was a very difficult thing to swallow for Frenchmen and for the Allies. Even after all these decades, it is still difficult to read Grose's book. The idea of a French government handing over its own Jewish citizens and its own Resistance Fighters to the Germans is unthinkable.

Regarding Vichy, is the expression "revenge of the anti-Dreyfusards" to be taken literally or metaphorically?

WEAPONS OF THE SPIRIT is a 1989 film written, produced and directed by Pierre Sauvage. During World War II, in and around one village in Nazi-occupied France, 5,000 Jews were sheltered by 5,000 Christians!

The documentary has received two national prime-time TV broadcasts to date, on P.B.S in 1990 and in 1992.

for Alfred Dreyfus' own family, the revenge was very literal and personal. His elderly widow was constantly moving and in hiding to save herself, his son Pierre fled his beloved French homeland and granddaughter Madeleine was deeply involved in the Resistance. In Nov 1943, Madeleine was arrested by the French police and transported to Auschwitz where she died.

perfect timing, many thanks.

I did not know of the documentary but my institution's library will be able to buy a copy (as soon as sales are resumed in late 2014).

some times i feel lonely.. i wanted also peace. one of my friend suggest me to do meditation now i am happy... meditation has a unique power.

Was it easier for Theis and Trocmé to inspire the rescue operation because they were living in the 'Free' Zone, not the Occupied Zone? Hmmmmm.
Certainly while the 'Free' Zone lasted they didn't have the Gestapo or the SS to contend with, and those were unmistakeably a naster proposition than the gendarmes and the regular French police. And things didn't turn really ugly on the Plateau until 1943, when the Germans had moved south and taken over most of the 'Free' Zone. So on the face of it, I would say that if they had been in the Occupied Zone in 1940-42 then they probably would have found the going rougher.

Having said that, they were opposing the legal French government of the day rather than an occupying power, so they had to overcome the ambiguity most Frenchmen felt towards Pétain and his mates. And their enemies were people who spoke their language, lived in their area, and had plenty of inside knowledge of their community. So their enemies may have been less horrible, but they made up for that by being better informed!

It has always seemed to me that the whole Plateau rescue was a fortuitous combination of three forces: the sheer decency combined with bloody-mindedness of the Huguenots, and their historic understanding of what it was like to be persecuted; the tradition of hospitality, which meant that many people there had direct experience of taking strangers into their homes; and the sheer remoteness of the Plateau, which made it next to impossible to police and occupy effectively. It's a bit as though the people of the Kimberleys suddenly united and took it upon themselves to hide escapees from Manus Island. The Australian government would be hard pressed to do much about it!

I wonder if there was ambivalence within the heart of each citizen or collective ambivalence that split the entire community in two. This said it all! "...their enemies were people who spoke their language, lived in their area, and had plenty of inside knowledge of their community. So their enemies may have been less horrible, but they made up for that by being better informed!" The enemy was better informed _and_ treacherous

While we are discussing the intense debate in France about the nature of memory and history, have you read A Village of Secrets by Caroline Moorehead? Her view is that while the anti-Semitism of Pétain's government was more ferocious than in most countries, some of the local population was truly heroic.

As in your post, Moorehead was also interested in the part of France high in the mountains of the eastern Massif Central.

Many thanks. I haven't seen a Village of Secrets in Melbourne bookshops yet, but does it deal with the same region, same people and same brutal enemies as A Good Place to Hide?