Camille Pissarro's painting of Montmartre: a record at auction

The Impressionist artists were irreversibly split over the Dreyfus Affair from 1894 on, the crisis that split all of France. Monet, Pissarro, Signac and Vallotton, as well as art critics Mirbeau and Feneon supported Captain Dreyfus. Those on the opposite side included Degas, Cezanne, Renoir and Armand Guillaumin. When asked to sign the pro-Dreyfus Manifesto of the Intellectuals, Monet, Signac and Pissarro signed; Renoir refused.

Manet was dead and Degas, Cezanne and Renoir never spoke to their old friends again. As a result, Camille Pissarro (1830-1903) was a rather distressed and lonely old man by the time he painted Le Boulevard Montmartre, matinée de printemps in 1897. So he stayed inside his upper floor flat and painted the busy spring scene through the window. Thus the elevated perspective.

He died a few years later. 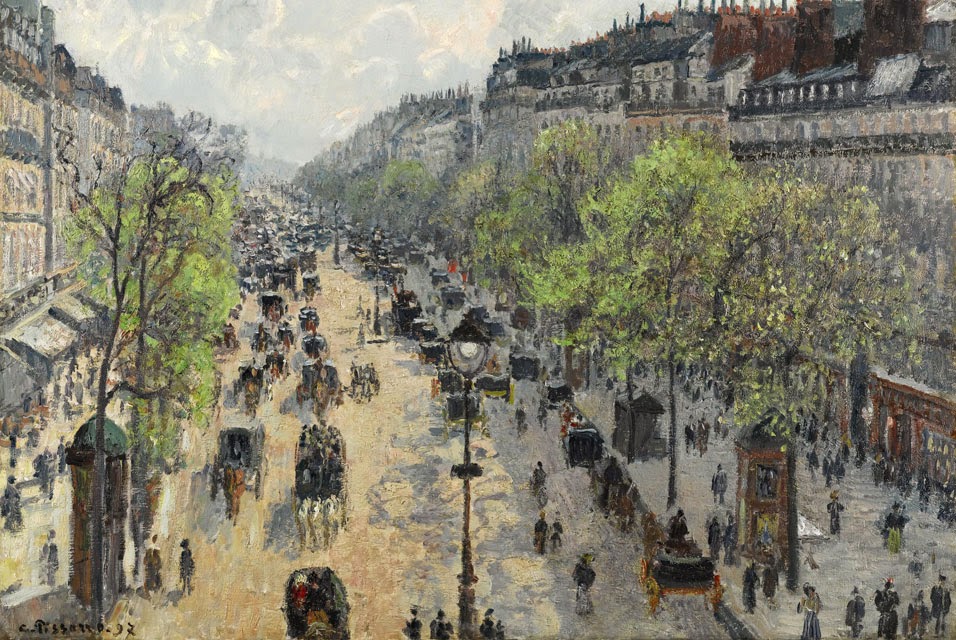 By 1923 the painting was in the impressive collection of the German industrialist Max Silberberg from Breslau. He assembled an art collection that included fine French Impressionist works by Manet, Monet, Renoir and Sisley, as well as masterpieces of Realism and Post-Impressionism by Cézanne and van Gogh. At the time he was ranked as an internationally famous collector alongside Andrew Mellon, Jakob Goldschmidt and Mortimer Schiff. So naturally his treasures were requested for exhibitions around the world. As late as 1933, Max Silberberg's paintings were generously loaned for shows in Vienna and New York.

Silberberg, who was forced by the Nazis to dispose of the work in a Berlin sale in 1935, was exterminated in Auschwitz with his wife. In 1999, Max’s daughter in law Gerta Silberberg became the first British relative of a Holocaust victim to recover a work of art under the Washington Conference Principles on Nazi-looted art. In 2000 the small painting was placed on loan with the Israel Museum in Jerusalem.

artdaily noted that Camille Pissarro’s series paintings of Paris were among the supreme achievements of Impressionism, taking their place alongside Monet’s series of Rouen Cathedral. Pissarro worked method­ically for over two months on his Boulevard Montmartre series and held this particular painting in especially high esteem, writing to his dealer Durand-Ruel, ‘I have just received an invitation from the Carnegie Institute for this year’s exhibition: I’ve decided to send them the painting Boulevard Montmartre, matinée de printemps… So please do not sell it’.

Pissarro’s paintings of Paris executed in the last years of the 1890s were hugely significant achievements that brilliantly evoke the excitement and spectacle of the city at the fin-de-siècle. For an artist who throughout his earlier career was primarily celebrated as a painter of rural life rather than the urban environment, the Boulevard Montmartre series was among a small group that confirmed his position as the preeminent painter of the city. Pissarro was able to exploit the artistic possibilities presented by the new urban landscape of Paris that Baron Haussmann’s renovations to the city had created.

The art market agreed. In February 2014 the Pissarro painting was auctioned at Sotheby's in London, and sold for £19,682,500, double its pre-sale estimate and five times the previous record for this particular Impressionist.

Although this post is just about the Pissarro painting of Montmartre, I did wonder what happened to the other 143 works of art from the Silberberg collection that were sold by the Nazis in four separate auctions between 1933 and 1938. The Foundation for Prussian Cultural Heritage, the organisation responsible for German museums, approved the return of a Vincent van Gogh and a Hans von Marees when its president asked for special authorisation to restore property to the children of people who died in the Holocaust. In 1999 the Foundation was successful, avoiding protracted and painful court proceedings, at least for two of the 143 art objects. Van Gogh’s Olive groces with Les Alpilles in the background was restituted to Gerta Silberberg from the National Gallery of Berlin in 1999. 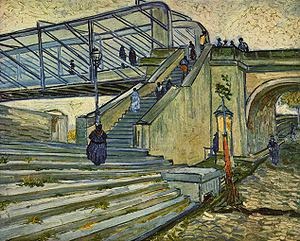 The Bridge of Trinquetaille, 1888
by Vincent van Gogh.
Was owned by Max Silberberg. Where is it now?

The Pissarro painting of Montmartre is truly lovely. Such movement in the picture, the freshness of the colours so reminiscent of early Spring and a lightness of touch that us so wonderful. To be able to look at this on one's wall each day would surely lift the spirits.

This is a most interesting background to the work. One cannot help but wonder, however, what has become of so many works that were confiscated or forced to be sold. Will they ever come to light? Perhaps not in our lifetimes.

I agree. Even if galleries thought they bought art legitimately, they aren't going to give back the works for no compensation. Insurance will have to pay galleries a fair price or the rightful owners will never see their art again.

I have seen a number of the 14 paintings that Pissarro did looking down at Boulevard Montmartre - morning with cloudy weather, night, spring, in traffic, without traffic and wet. They were all fresh, energetic and filled with the seasonal light.

Even if galleries bought paintings without doing their due diligence first, they did not do the original theft and will not willingly give up paintings they paid for.

So I agree that some financial compensation is necessary, IF the galleries are to give the art back to the rightful owners. But would insurance parties come to the party?? Would the nation's central government??

Hello Hels, This post reminds us of the complicated intertwinings of art and politics, not only in later misappropriations and legal battles, but also in those issues concerning the original artists. I'm not sure that the beauty and cultural value of an artwork is totally separate from the ethics of its creator, and knowing the anti-Dreyfuss attitude of such giants as Degas and Renoir has to diminish their works to some degree, at least in my eyes.
--Jim

P.S.: I agree with you wholeheartedly that this painting is a miracle of lightness and elegance, and well deserves its record-setting price.

thank you. I want Boulevard Montmartre Spring Morning to be worth a record price because it is fresh and energetic, and because Pissarro handled changing climate and colour very elegantly. But I sometimes fear it fetched a record price at auction because of the painting's infamous history.