Dining out in Victorian style - Ritz and Escoffier

Lyricist WS Gilbert and composer Art­hur Sulliv­an, under the pa­t­ron­age of the enter­pr­ising impresario/ho­t­el comp­any president Ric­hard D'Oyly Carte, wanted the good times of Comic Opera to continue. With profits from “HMS Pinafore”, Richard d'Oyly Carte built the Savoy Theatre, opening its London doors in October 1881. The money must have been rolling in; “Mik­ado” was also hugely successful from 1885-7. 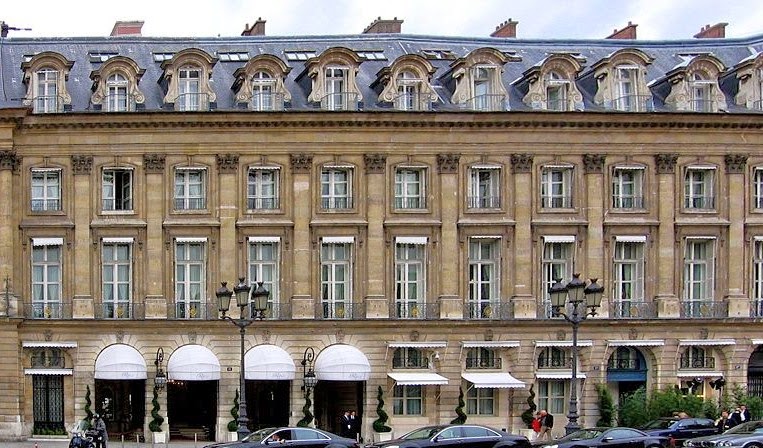 Richard d'Oyly Carte wanted a hotel that would complement his amazing new theatre. The result was the Savoy Hotel, whose opening cerem­ony in 1889 was a major production in its own right. d'Oyly Carte wanted to make the Savoy the centre of cultural activity in London, to attract the elite of classy society and the arts. So he gave the Savoy Hotel every new tech­nol­ogical gizmo that had been invented eg full electric lighting and dozens of bathrooms. And he also wanted the very best men for his new project, in­c­l­uding Cesar Ritz.

Swiss Cesar Ritz (1850–1918) had already become a well established hotelier in France. Frenchman Auguste Es­cof­­fier (1846-1935) finished school and moved to Monte Carlo where he worked in various kitchens. But they had not worked together until 1888 when Ritz opened a restaurant with Escoffier in Baden-Baden.

When the two were invited to London by Richard D'Oyly Carte to become the manager and chef of the new Savoy Hotel, they secured their positions in 1889. In fact Ritz brought in ALL his own team with him to Lond­on. With Escoffier in the kitchen and Ritz with the cust­omers, Britain found itself with a very elegant restaurant. The two men revolutionised dining out and changed the preferences of well heeled British citizens, as well as tourists to Britain from elsewhere.

Ritz was determined to create a mixed-gender, Continental atmosphere to dining out. In Vienna, couples went to see music or theatre, then dined out together. In London, men had traditionally had eaten in all-male private clubs or they ate at home. So Ritz introduced orchestras to the din­ing room, extended the dining period, required his customers to wear evening dress and restricted unesc­orted women. The Savoy had successfully promoted itself as a meeting point for London society and as a world-class hotel.

By the 1890s, dining in hotels had been raised to an impressive standard by these two men; even today we use the word “ritzy” to mean elegant, ostentatious and fancy. And it should surprise no-one that the very sociable and elegant Prince of Wales told his friends that “Where Mr. Ritz goes, there I go.” Anybody who had enough money, leisure time and culture tried to patronise Ritz and Escoffier. Especially the nearly arrived middle classes. 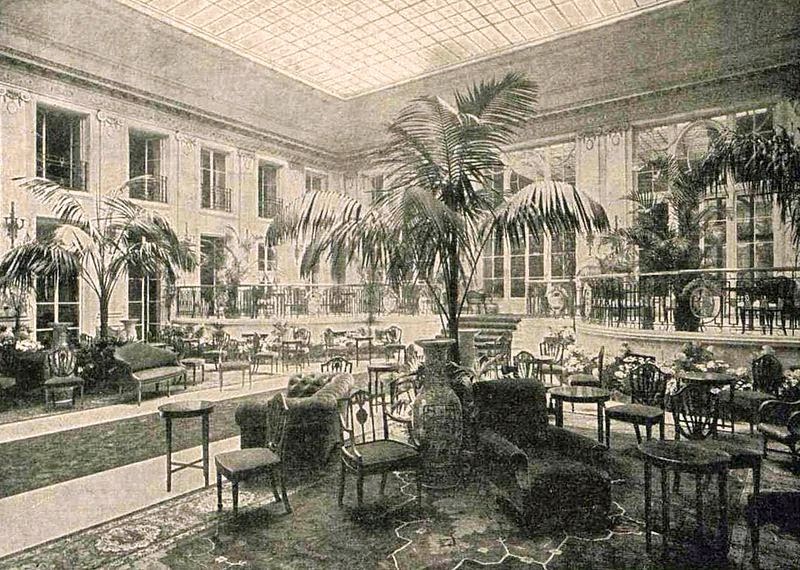 Escoffier was a thinker and analyst, noting preparation procedures so that he could record reliable rules for food preparation in hotels. Thankfully Escoffier made his menus lighter and easier to digest. The courses were still more numerous than strictly necessary, but at least they were in a predictable order so that cus­tomers could plan their meals sensibly: soup, fish, mains with vege­table and salad, a light dessert and cheeses. And a diff­erent wine was opened with each course. Although we eat smaller, simpler meals now, the format is largely still as Escoffier laid it down.

I particular liked Auguste Escoffier’s organisation of workers in the kitchen. The kitchen workers had to be clean, quiet and gentlemanly; and they had to specialise in one food production area or another. Instead of every cook and undercook yelling at the top of his voice, Escoffier created the position of announcer, a man who took orders from service personnel and instructed the cooks on which foods had been ordered.

Then something went badly wrong. Ritz and Escoffier might have been sought by royalty and people in the know, but they suddenly lost their jobs at London’s Savoy Hotel in 1897 because of theft. Ritz left Britain, purchased an old palace in Paris and transformed it into his own luxury hotel. Ritz Hotel Paris, opened in June 1898 to a glittering reception, was to provide his rich clientele with utter refinement, including a bathroom for every suite. As I would have expect­ed, Ritz looked to Escoffier to organise his kitchens. 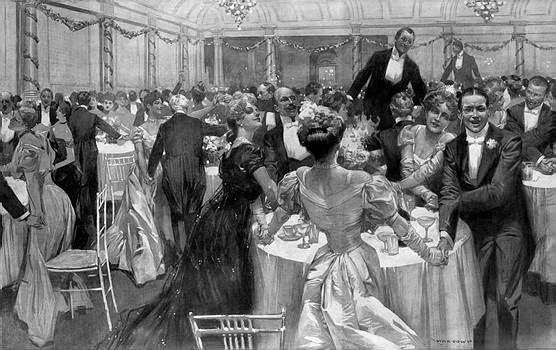 The following year the two returned to London for another joint venture, at the Carlton Hotel where they worked together until Ritz finally retired. Escoffier remained and continued to innovate, as he had done at the Savoy. He developed a military-style brigade system for maximum efficiency, organising the kitchen into a strict hierarchy of authority, responsibility and function. The kitchen was divided into stations, one for sauces, one for pastries etc. Thus the various chefs ensured that all the dishes were served hot and in a timely fashion, under the watchful eye of the chef de cuisine.

Fortunately Escoffier wrote journal articles and books, one of which is a cookbook still used in professional kitchens everywhere, Le Guide Culinaire, first published in 1903.

In case anyone in Britain did not know how much fun the Savoy Hotel offered, The Illustrated London News provided News Years Eve party photos in January 1907.

The Savoy Hotel used to be an absolute favourite of ours as we loved the high quality of the service there, coupled with the amazing Art Deco decorations. Needless to say, we were nervous about what would happen when the multi million pound 'makeover' took place in recent years.

Alas, we feel that the Savoy in its current livery does not quite live up to its old standards and has lost the slightly gentleman's club atmosphere in favour of a rather more corporate five star hotel feel. In our eyes this is rather a pity.

Our friends when to the auction sale of the Savoy prior to its closure so we have two plates and six pudding spoons to remember the 'old' days by!

One year spouse and I went to a course at the Ritz Escoffier School, right next to the Ritz Hotel in Place Vendome. Terrific course. Love the school's name.

Hello Hels, It is easier to appreciate Escoffier's innovations when placed into historical context, as Ester Aresty has done in The Exquisite Table. Her book devotes a major section to Escoffier, and goes into more detail on his partnerships with d'Oyly Carte and with Ritz.
--Jim

It is inevitable that change will be constant over the generations, and not necessarily in a direction that we might like. But when the last of the Carte family died in 1985 and the hotel went into strangers' hands, the rate and direction of change heated up.

I wonder if the squillions of pounds spent on this latest round of renovations was well spent. I have heard mixed reviews.

What a brilliant idea to open the Ritz-Escoffier School of French Gastronomy back in 1988 and even more brilliant to place it next to the Ritz Hotel.

What I did not realise was that the school offers more than just professional courses. I presume you did one of the school's recreational courses, on weekends or summer holidays.

I have not seen a copy of The Exquisite Table: A History of the French Cuisine, but this 1980 book seems to be in constant reprint. The contemporary images will also appeal to me enormously :) Thanks.

I am reading The Hotel On Place Vendome by Mazzeo and sofar it has touched on all the people you write about eg Proust, Coco Chanel, Sartre and de Beauvoir, Hemingway, Edward and Mrs Simpson, Sarah Bernhardt.

But two important things.
Auguste Escoffier's main early lover was Sarah Bernhardt.
Ritz's widow was still alive and running the Ritz Hotel when the Germans invaded in 1940. She decided to keep the hotel open.

I knew that after the Germans occupied France in 1940, Coco Chanel lived with the Nazi officer Hans Gunther von Dincklage in the Ritz Hotel

But about Escoffier's love life I knew nothing. Now I will have to read the book! Many thanks
Hels

I work right around the corner from the Savoy. If I approach my office from the embankment, I walk under the Savoy, 80 Strand, the Adelphi and then up the steps to Robert Street.

It's fascinating that these men brought such lasting change to dining in London. I usually feel so stuffed after a two course meal. It is incredible to imagine that people used to eat 7 or so courses.

The amount of effort invested in creating fabulous late Victorian and Edwardian meals for the glitterati must have been staggering. Just as well the staff had to do it all :(

At least we can admire Escoffier for reducing the amount of stodgy food, replacing it with more nutritious, lighter food. He was very specific in A Guide to Modern Cookery
https://archive.org/stream/cu31924000610117/cu31924000610117_djvu.txt

Righto.. I have read The Hotel On Place Vendome by Tilar Mazzeo, well worth the effort.

When the Germans were bombing the heart out of London, Mrs Wallis Simpson (Duchess of Windsor) had a dinner party at the Ritz and was very vulgar about the British civilians who died. The Duchess was also passing on information to her former love, Joachim von Ribbentrop.

In June 2016, the $590 million renovation were completed and the hotel reopened. The architect carefully safeguarded the beautiful, historic look!

Visitors will want to use the Chanel Spa, drink cocktails in the Bar Hemingway, eat afternoon tea in the Salon Proust and play the grand piano in the Chopin Suite.

Since Proust lived at the Ritz for quite some time, I will be keen to see the Proust suite that replicates his own rich library, souvenirs and period furniture. Presumably it was not be within my price range.