Who in their wildest nightmares thought that there would ever be a civil war in England? Who believed that a British king would ever be executed on the lawful orders of 59 judges? Who envisaged that the British Parliament could ever pass endless restrictive laws to regul­ate citizens’ moral behaviour, to close down theatres and to enforce strict observance of Sunday? The years 1642–1659 were part of a very difficult, very stressful era. 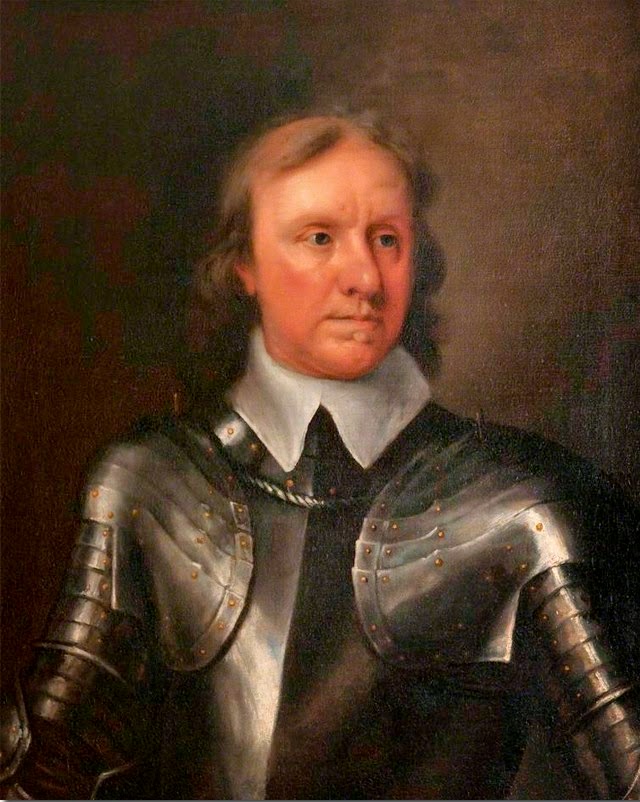 
Oliver Cromwell (1599–1658) was one of those rare and controversial figures in history who still excite mixed emotions, hundreds of years later. Everyone has a different opinion about him, depending on whether our families were Catholic, High Church, Low Church, no church, Irish, republican, pro-monarchy or military. Yet despite the ambivalence, his face is one that every school student across the old British Empire would have known.

The Cromwell Museum in Huntingdon (near Cambridge) is in a building that was originally part of the C12th Hospital of St John the Baptist (c1170-90). The hospital was an alms house for the poor. It had been succeeding in its mission very well, but with the the suppression of Catholic institut­ions in 1547, the hospital building had to find a new purpose in life. It was modified and used as Huntingdon Grammar School.

After a temporary exhibition held in Huntingdon in 1958 to mark the 300th anniversary of Cromwell's death, the city council collected objects to celebrate the man’s life in old grammar school. Thus the town became a perfect location for the museum; Oliver Cromwell was born in Huntingdon in 1599 and lived there until he left home to go to univ­er­sity. And the museum is in a perfect building since it was the grammar school where Cromwell had been a pupil.

It was decided that the Museum would go into the hospital’s Norman Chapel, just a single-room, but big enough for the job at hand. Imagine the excitement when the builders started removing the detrit­us of centuries and found a perfect Romanesque doorway and five decorative arches on the west front. By the time the museum opened in 1962, Huntingdon had saved the oldest building in the town and were starting to bring in thousands of visitors.

Founded in 1962, the museum contains hundreds of objects, paintings and printed material describing the mid C17th. The objects have been passed down by the descendants of one of Oliver Cromwell’s sons, and include portraits of Cromwell and his family, including two by Robert Walker and Sir Peter Lely, and several Samuel Cooper miniat­ures.

The museum also has coins which can be described thus: Until the death of the King in 1649, all coinage bore his head. After the establishment of the Protectorate, new coinage appeared which depicted Cromwell as a regal figure. The museum collections include examples from both eras.

But the real treasures are the personal items that visitors would never have seen before e.g the hat Cromwell wore at the dissolution of the Long Parliament in 1653; his personal gunpowder flask; his apothecaries cabinet; his family seal and jewellery. Perhaps surp­risingly for a family that valued austerity, there is a Florentine pietre-dure inlaid cabinet, containing its glass pots of soaps and cosmetics, given to Cromwell by the Grand Duke of Tuscany.


This month the museum curator put on display an amazing death mask of Crom­well. It is a copy from the bust used for the figure of the Lord Protector, the focus of his state funeral at Westminster Abbey in 1658.

The museum does hold a number pamphlets and copies of key texts of the period, such as The Humble Petition & Advice of 1657, which clarified the organisation of Parliament and the duties of the office of Lord Protector. But most Cromwell documents are located in the nearby Huntingdon Library and Archive building. Thus students will want to visit both sites.

The museum was proposed for closure in the next year or two, I had ass­umed because Oliver Cromwell was somewhat of a divisive chap and the County Council did not want any controversies to arise. I believed the Council had read the hot debates canvassed in the article called Reluctant Regicides: why do modern Britons still find it so hard to acknowledge their revolutionary past?

Now it is becoming clear that the Council only wants to save £20,000 a year, presumably preferring to improve the town’s traffic lights than improving the minds of students. I would rather they start charging visitors an entry fee… than close this fascinating museum.

Hello Hels, You describe a unique and charming museum, yet one afflicted by a common problem, a lack of support from its directors. Not only do we risk losing this fascinating museum, but also by extension its interesting building.

A further problem is that closings like this will make donors reluctant to give historic objects that may be lost track of or even sold. I hope that the Cromwell museum will resolve its difficulties.
--Jim

We read Reluctant Regicides in class and understood the king's duplicity easily. But regicide was a big step. I think that had King Charles I been exiled to France and the next rightful king put on the throne, there would not have been a Puritan Commonwealth and there wouldn't be national controversy still.

Parnassus
your timing is perfect! I was worried about the same question!

A reader wrote to say he had 17 letters written by his grandfather during his internment on the Isle of Man, some classical music he wrote plus a some newsletters produced by the detainees. He asked where he could send these documents to reach historians researching the internment camps.

I made my suggestion (Manx National Heritage)and noted that if he does place the family treasures in an institutional archive, that he should get a copy of _every_ document for himself first.

you are quite right to examine the Civil Wars and execution of Charles I, separately from Oliver Cromwell.

Cromwell was certainly a parliamentarian from 1628, and an officer in the Parliamentary Army in both civil wars. But he didn't start to agitate for truly radical change until 1651, years after Charles was executed. And he didn't become Lord Protector until 1653.

Quite right,it should NOT be closed. He is still a hero to many of us.

Regrettably I suspect that most Britons could not tell you who Oliver Cromwell was; it was certainly different a half century ago.

I am so glad you said that. Both points, actually :)

is that true? Are school children not offered history subjects at school? Or is the Civil War era excluded from the curriculum?

I did history for my full 6 years of high school, starting with the Tudors and ending with breaking up of the British Empire.

It is my impression that little history of the kind you were taught is now to be found in schools. A friend and I asked a young nurse a year or two back about famous English people - she had only vaguely heard of Thatcher, didn't seem to know who Churchill was, but knew who Shakespeare was. We didn't even get round to Cromwell. Of course she knew who Adolf Hitler was, the schools seem to cover that and little else.

Re Cromwell, I think the old cultural/religious battles between Cavalier and Roundhead have now disappeared, perhaps a result of increased secularism and the decline of the Anglican Church and Nonconformity. Sir Isaac Foot's comment: "'I judge a man by one thing, which side would he have liked his ancestors to fight on at Marston Moor?" now seems very archaic, but it would not have seemed so a century ago.

Similar to your experience. a young (early 20s) Australian woman was saying thank goodness Australia was never involved in the Vietnam War (late 1960s-early 1970s). I said ARE YOU INSANE? We introduced mandatory conscription, sent thousands of soldiers to Vietnam, destroyed thousands of civilian lives in Vietnam, lost hundreds of Australian soldiers' lives and brought down the Federal government here!

Bring back history classes, I say!

My previous comment missed a "not" but you seem to have understood that.