A history of the Papacy moving to France. To France??

In the book A History of God, Karen Armstrong showed how, in the history of the major monotheistic traditions, the idea of God evolved over time. Of course everything has a history ..but I had never thought of “God” having one.  Inevitably other apparently unchanging concepts must be equally open to historical analysis eg the eternal home of the Catholic Church is Rome.


Yet.. yet …the Avignon Papacy clearly did refer to a period in Church history from 1309-78 when 7 French popes and the seat of the Pope was moved out of Italy. Why did the papacy leave Rome? Perhaps because the great C14th prosperity of the church was accompanied by a serious compromise of the Pap­ac­y's spiritual integrity. Each pope seemed to acknowledge the ambitions of the French emperors.

Pope Boniface VIII (reigned 1294-1303) was a talented, Italian pope. But Boniface end­lessly meddled in foreign affairs, claiming temporal as well as spiritual supremacy. His worst quarrels were with: Emperor Albert I of Habsburg, the powerful Col­onnas fam­ily and King Philip the Fair of France, whom he excom­mun­icated in 1303. The pope was seized by agents of the Colonnas, and held cap­t­ive. The pope was released, but he soon died alone and afraid. 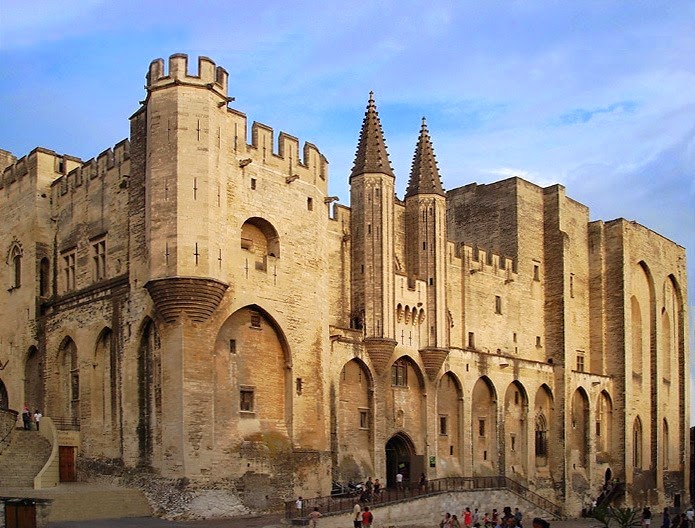 1] Raymond Bertrand de Got had been the archbishop of Bordeaux, and a con­fi­d­­ante of English and French kings. In 1305, he became Pope Cl­em­ent V (reigned 1305-14). Bec­ause Italy was on the verge of anarchy, he kept away from Rome. He knew Boniface VIII had died in captivity, so the French King greatly encouraged Pope Clement to move the papal court to France. Clement was cr­owned at Lyon in the pre­sence of his patron, King Philip IV the Fair of France.

The papacy had been located outside Rome before but now the papacy left Italy! And being French him­self, Clement naturally chose France. Even though the pap­acy was finally indep­en­dent, it WAS inf­l­uenced by King Philip's Fr­ench crown. Phil­ip asked the Pope to proclaim the Knights Templars heretics and hand them over to the secular au­thorit­y. The pope caved in immediat­e­ly; in 1307, all 2000 knight ­monks were delivered to Philip for burning.

Clement made Notre-Dame-des-Doms his cathedral in Avignon, complete with a magnificent tower. Pope Clement invited the great Sienese art­ists, Giotto, Simone Martini and Matteo Gio­vann­etti to come from Italy, to create Int­ernat­ional Goth­ic master­pieces for this church.

Petit Palace was built in 1317 as a cardinal’s home for Clem­ent's Grand Pen­itentiary. Like the Papal Pal­ace itself, Petit Palace’s architecture had military elements, though they softened later. In this time of great wealth, po­p­es and card­inals vied to endow ever more gener­ous holy foundations. 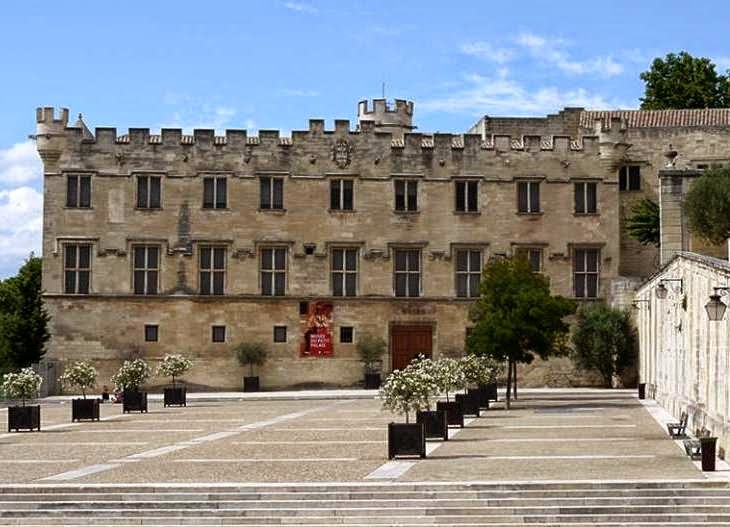 Clement V created 9 new French cardinals!! In an age of pa­pal nepot­ism, Cle­m­ent out-nepotised them all. Dante put Clem­ent V in­to hell in his Divine Comedy! Even if Clement had intended to return to Rome, by this time he was too old to go on the journey. In any case, Rome was still under the hostile control of the Holy Ro­m­an Emper­or, Henry VII. Clement died in France and was buried there.

2] Jacques Duese was the next French bishop to become Pope John XXII (pope 1316-34). An elderly man (72), John XXII cut down court costs, and instit­ut­ed a new fis­cal system to bring money in. This was achieved by taking control of the appointments of bishops, and splitting up large dioceses. John tried to keep the office of Holy Roman Emperor with­­in his control, but his view of papal mon­archy was problematic.

The Audien­ce Hall is on the ground floor of the New Palace. Half the hall was used by the ecclesiastical judges of the Court of the Holy Roman Rota; half was used by litigants and their lawyers. The Fresco of the Pro­ph­ets was Giovanet­t­i’s work. On the op­­p­osite bank of the Rhone, the nearby town of Villeneuve-les-Avignon area develop­ed as an exclusive residential district for mem­bers of the papal court. He died in 1334 while the work on the papal palace cont­inued.

3] Benedict XII (pope 1334-42) Jacques Fournier was a learned French theologian and inquisitor. He had new constit­utions drawn up for the Cist­erc­ians, Bened­ictines and Franciscans, and insisted on reg­ul­ar visitations to the monas­ter­ies. Where Benedict XII failed was in foreign policy. He com­p­letely identified the French king's priorities as his own, caus­ing great bitterness in England, Germany and Italy. Benedict was prepared to return the papacy to It­aly, but feared Rome would be chaotic. In any case the French king and the French cardinals opp­os­ed any move, so Benedict entren­ch­ed the pap­acy in Avig­non via his build­ing activities.

He made the Old Pap­al Pal­ace into an impregnable fortress. The Hall of the Consistory became the supreme council of all Christen­dom. With great pomp the card­inals filed in when sum­mon­ed by the pope; here the pope received kings and ambass­adors, canon­ised saints and con­d­em­n­ed heret­ics. The return to Italy became unlikely, this time by def­ault. Ben­edict appointed only French cardinals to the curia, thus en­sur­ing that the future of the papacy was even MORE likely to rem­ain in France. His tomb is in Notre Dame Cathedral. 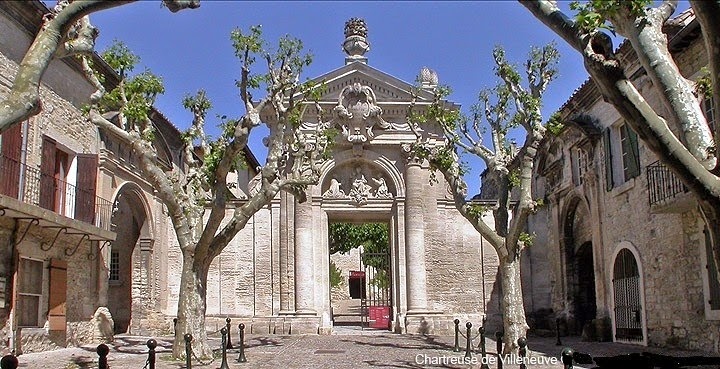 4] Clement VI (pope from 1342-52) Frenchman Pierre Roger had a doc­torate in theology, became a dip­l­omat and then chan­c­el­l­or of France. He was arch­bish­op of Sens and Rouen, then had been cardinal at Avig­n­on. This very cultiv­ated cardinal, who was King Philip VI's favour­ite, lived like a secular prince. His palace in Avignon looked like any mil­it­ary fortress with narrow op­enings, impen­etrable de­fences and moats. But INSIDE it was full of decorat­ion, fre­s­coes and tap­est­r­ies, art and the court­ly life.

In 1348, the Avignon territ­ory was BOUGHT from the papacy. But this was a stor­my period when Clement VI tried to pre­v­ent the invasion of France by Edward III ag­ainst Ph­ilip VI of Val­ois. He was very involved in sup­port­ing the claims of Charles IV of Luxembourg to the Holy Roman Emperor’s imperial throne against Louis of Bav­aria.

5] Innocent VI (pope 1352-62) In the conclave after Clement V's death, the cardinals tried desperately to limit the incoming pope's ability to cre­ate heaps of new cardinals. The non French cardinals were most anx­ious to prevent the papacy from continuing under the control of the French king. Etienne Aubert was a French lawyer and judge, before taking holy ord­ers. He had been a bishop, cardinal and adm­inist­rator of the Avignon see, then became Pope Innocent VI. 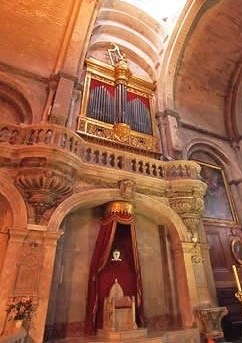 Papal throne
in the sanctuary of the Avignon Cathedral

By 1363 Urban tried to transfer his court back to Rome. Ev­en­t­ually in 1367, under the protection of Holy Roman Em­p­eror Ch­ar­les IV, Ur­ban and a very reluctant Curia made the move to Rome, but the Lat­eran was in ruins. So he lived for 3 years in the Vat­i­can itself while St John Lateran was re­built. Meanwhile the French cardinals cons­tant­ly pres­sured Urban to return to Av­ig­non, and he did so because he needed to negotiate with both the Fren­ch & English before any crus­ade to Turkey could go ahead. And Urban created 7 new cardinals in Rome, 6 of them Fren­ch.


7] Gregory XI (pope 1370-8) Pierre Roger de Beau­fort was from a noble Lim­oges family. He made a card­inal by un­c­le Pope Cl­ement VI, when he was still a teen­ and made pope at 42. Greg­­or­y ruth­less­ly repress­­ed heresy in France, Germany and Spain via the Inquis­it­ion. Every aspect of Ch­ris­tian life and church org­an­isation was defined: marr­iage, sacra­m­ents, ordinat­ion, canonisation, electoral proc­edures etc. Recourse to the papal courts grew at a phenomenal speed. By the C13th, universities in Bologna, Paris, Ox­ford, Cambridge etc made theology, philosophy and especially law im­portant.

By the 1370s, the Babylonian Captivity seemed unending. Many of Europe's troubles were felt to be due to the long res­i­d­ence of the popes at Av­ig­­non, wh­ere the Curia was now lar­g­ely Fren­ch. Greg­ory wanted to send a crusade to the east that would reun­ite the eastern and west­ern church­ under the leadership of Rome. Also he believed Rome was the only true home for the papacy, and, due to the recent successes of the papal armies, he felt safer about going home. But there was still vigorous opposition of the French card­in­als. 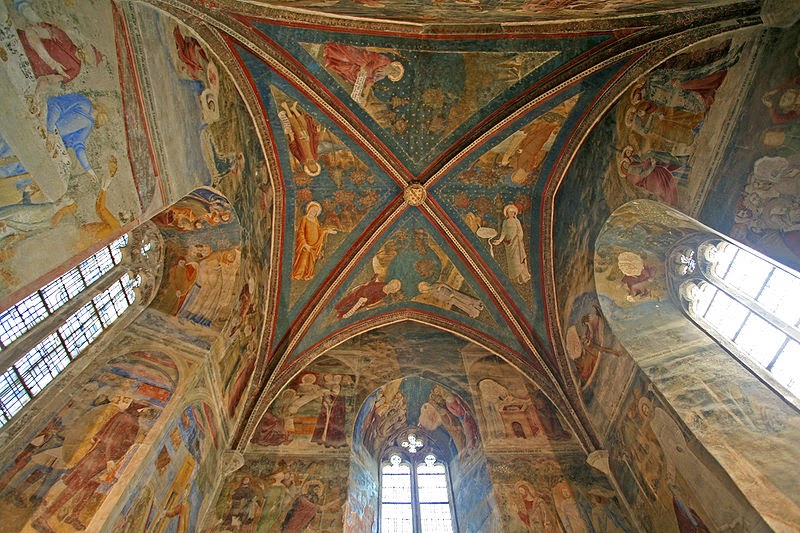 The frescoes on the ceilings in the St-Jean chapel, as well as the walls of the Grand Audience Room, were painted by the Italian artist Matteo Giovannetti.

Cath­er­­ine of Siena arr­iv­ed in Avignon on June 1376 to bring the Pope back to Italy and was graciously rec­eived. But she died in 1380 at 33, and was bur­ied in Rome’s Dominican Church of Santa Maria sopra Min­er­va. Pope Greg­ory XI did act on Catherine’s pleas and in 1376, he risk­ed a trip to Rome. Gregory and 2000 merc­en­aries arr­ived in Rome in Jan 1377 to live in the Vat­ican. But Gr­eg­ory was mobbed by jeering Flor­entines and thous­ands died, so he fled to a safer city. Gregory eventually limped back into Rome, and the Bab­yl­on­ian Cap­tiv­ity was over. He died exhausted the next year and was buried in the Rom­an Forum.

Street mobs dur­ing the fun­eral thr­eat­ened to burn any cardinal who voted for a non Italian pope. No French­man was ever el­ec­ted pope again! France would never steal the papacy away from Rome again!

A thoroughly comprehensive, fascinating and detailed account of the removal of the Papacy from Italy to France. As it happens, and unusually so, this is a subject area familiar to us and, indeed, once we attended a series of lectures on Rome and the Papacy in the Renaissance.

Hello Hels, The phrase "politics as usual" seems to sum up most of these machinations.

I was just reading the Wikipedia article about the Papal Palace, which additionally mentioned the fine library there, and how Avignon became at that time a center for culture and study.
--Jim

I am very pleased that your series of lectures on the Papacy in the Renaissance included the French decades. Rome was sensational, but Rome alone did not fully describe Papal splendour.

Musée du Petit Palais became the pope's episcopal headquarters. Imagine the endless procession of architects, painters and sculptors who had to be brought in, just to do this one palace's frescoes, sculptures... I can also imagine writers, scholars, men of science thriving in this very intellectual town.

It would be interesting to ask why small Avignon remained culturally important, even after the papacy returned to Rome. And today Avignon still has overseas students, museums, theatre, operas etc.

I wound up in Avignon during a European tour in my Uni days, and was amazed to discover that the Popes had moved there.

Of course my travelling companions had to photograph themselves dancing on the unfinished Pont.

it is funny what we do not know. I had no idea that the biggest collection of Napoleon's possessions outside of France was in Melbourne, until the grandchildren took me to The Briars homestead a few years ago.

I wonder why they chose a small place like Avignon, not very famous. Why not a big, beautiful French city, if they wanted to impress the French kings?

That the papacy had to move to France made sense. All seven popes were French, the newly appointed Cardinals were largely French and the French Crown was very influential.

Avignon had two great advantages: 1. the town was relatively close to the French-Italian border and 2. it was the property of the Count of Provence, a papal vassal. Avignon was thus the least exile-ish of all the possible exiles.

When Pope Gregory XI brought the papacy back to Rome, the Avignon Papacy (1309 to 1378) was over. Or was it? As soon as antipope Clement VII returned to Avignon with his French cardinals in 1378, there were two streams of popes at the same time - the Roman and the Avignonese. This Great Schism within the Western Church lasted from 1378 to 1417.

You might like to read: "1378 The Great Papal Schism" by Francis Oakley, in Christianity History magazine, Dec 2016.
http://www.christianitytoday.com/history/issues/issue-28/1378-great-papal-schism.html