San Francisco - before, during and after the 1906 earthquake

My favourite spot in San Francisco is Ghirardelli Square, created when an Italian chocolatier moved to Calif­orn­ia in 1848 to pursue the gold rush. Later his wife joined him in San Francisco and soon became his business partner. The red brick building in Ghir­ar­delli Square, which the family bought in 1893 to house their booming factory, is what remains of the Ghirardelli chocolate factory today. I mention this because the factory survived the 1906 quake and fire relatively intact. Today the old chocolate factory is being used as an antique gallery. But most people, I suppose, go there for the chocolates.

The Japanese Tea Garden was first created for the 1894 California World's Fair in the area that is now the Music Concourse. John McLaren, who did much of the overall design of Golden Gate Park, was approached by a Japanese landscape designer who wanted to convert the temporary exhibit into a permanent section of the park. They imported many plants, gold­fish, birds, statues, Shinto Shrine, wooden Buddha and bronzes, to make the space restful and green. Ironically this garden was intended only for the exposition and was to be intentionally dismantled soon after. Fortunately it also escaped earthquake destruction in 1906. 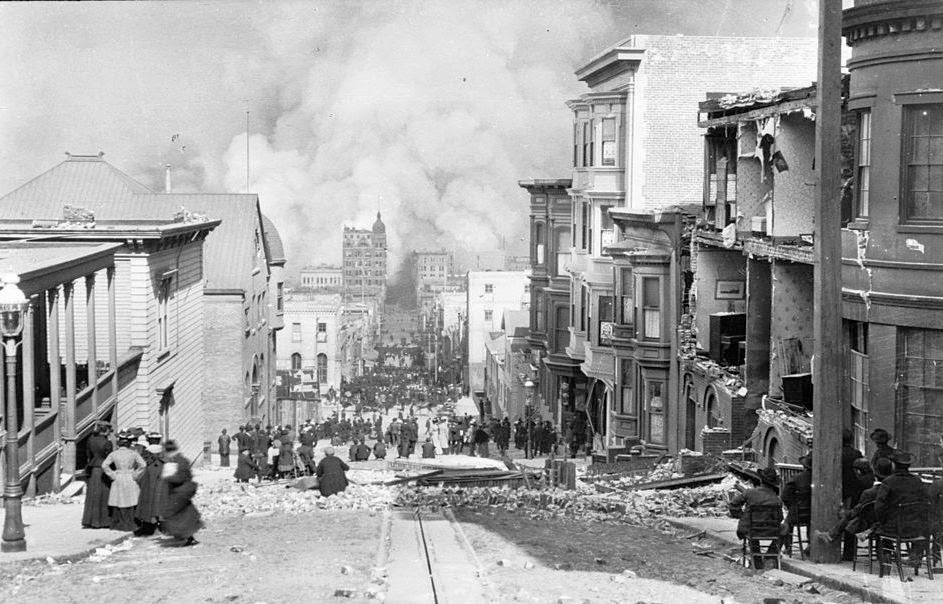 In April 1906, an earthquake severely shook the city. A tremour started that lasted a relatively short time, and as there had been minor earthquakes in northern California over the previous decades, no-one seemed too worried. At first! In the 1906 photo, you can see groups of people who have pulled comfortable chairs out onto the street, to watch the events.

It was fire that was so destructive. Within a couple of days of the quake, some fire-fighters used dynamite to demolish buildings and to create fire breaks. Other serious fires were caused by ruptured gas mains and destroyed water mains; the escaped gas caused the explosions and the lack of water meant there was no way to control the fires. Althogether 25,000 buildings disappeared in the explosions and fires which went on for ages. Of the city’s population which had been about 400,000 at the time, some 3,000 died.

The army was the only organisation strong enough to take control of relief efforts in the battered city. Two months later, in the middle of a hot summer, three quarters of the population was still homeless. Refugee tent camps were in open spaces across the city.

It was urgent that the city regrow from the ashes. In hosting the Panama-Pacific World International Expos­ition in Feb 1915, San Francisco was honouring the discovery of the Pacific Ocean and the Panama Canal; but the city was clearly celebrating its own resurrection after the shattering 1906 earthquake and fire.

The Palace of Fine Arts was specifically designed for this Panama-Pacific  Exposit­ion. Architect Bernard Maybeck created an overgrown Roman ruin, to show "the mortality of grandeur and the vanity of human wishes". Although it was meant to delight by its ex­terior beauty, its purpose was also to offer all visitors an ins­p­iring experience inside. The exhib­it­ion hall housed the art works, especially Impressionist works; its colonnade and rotunda were beautifully reflected in the surrounding water. For amazingly detailed photos of the architecture, see the blog Architect Design.

After the terrible earthquakes that greatly damaged the original municipal buildings in Civic Centre, a rebuilt City Hall was completed in 1915. The architect was Arthur Brown, a San Fr­ancisco architect known for a number of local land-mark buildings. Brown was the right man for the job. In the City Hall project, the Beaux-Arts focus was on a huge dome. 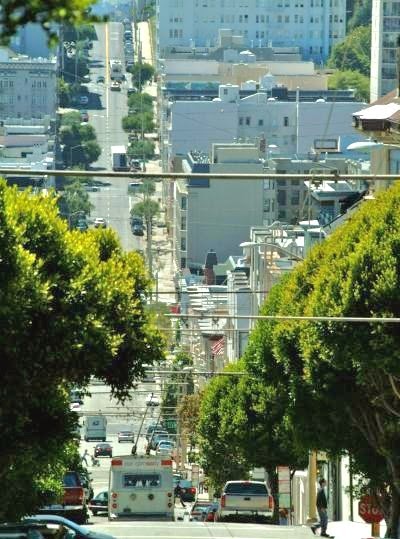 Brown also designed San Francisco's Veterans Building and Temple Emanuel. But his most famous site was Coit Tower 1932 on top of Teleg­raph Hill that was dedicated to the San Francisco fire fighters. The art deco un­painted reinforced concrete tower, 64ms high, was dedicated in 1933 and reminds visitors of a fireman’s nozzle. The funds were bequeathed by Mrs Coit, widow of a wealthy financier.

The earthquake did not harm San Francisco’s lovely waterscapes, both natural and man-made. Built originally at the end of a natural peninsula, over the top of hills, the city is still surrounded by the gorgeous waters of the Golden Gate, the bay and the Pacific Ocean. Since my son and his family moved to San Francisco for a few years, our favourite sights have been the San Francisco-Oakland Bay Bridge, opened in 1936, and the Golden Gate Bridge, 1937. And since we don’t eat meat, we spend a lot of time watching the fishing fleet keep Fisherman’s Wharf busy with fresh fish and tourists by the thousands. It took nearly 30 years to rebuild or replace all the facilities that a modern city like San Francisco needed. But by 1937 the city looked even better than it did before the earth quake struck.

Like Napier New Zealand after the devastating 1931 earthquake and equally destructive fire that followed something good can come out of something bad although SF was on a much larger scale. By the way, have you seen the Oct 1905 film "Down Market Street" on UTube?

Correction, I see the film was shot between the 24th-30th March 1906, only around three weeks before the earthquake and fires.

I studied the past and present of San Francisco before I wrote my novella 'More Than a Wisp of Fog'. I can relate to your crisp, fine post.

yes!! Napier in 1931 was also a total disaster. I have seen the death toll, from falling brick walls and from being burned... and appalling loss in a smallish city (?300).

Yes, something good did come out of the catastrophe. Napier grabbed the opportunity to redesign and replace the entire city centre. I think in Napier's case, the rebuilding of the city took a shorter time than the repairing of the nation's anxiety.

I will have to look for the Utube, thanks.

*agreed* the novelist has to put himself into the hearts and minds of people who lived through the crisis. Not easily done.

I remember the devastation of Cyclone Tracy in 1974 that utterly destroyed Darwin. And I witnessed the results of Black Saturday bushfires next to Melbourne in 2009. Shocking :(

A fascinating account of San Francisco, a city we have long wished to visit. Perhaps one day?!!

Hello Hels, San Francisco is one of the greatest cities to visit, and it is surprising how much remains from pre-Earthquake days. However, many of the surviving buildings were heavily damaged and rebuilt. We have to admire the San Franciscans' hardy spirit in rebuilding the city.

I am a committed Europhile, so for me to say that San Francisco is one of the most attractive cities on earth is quite something. The bay is a delight, the streets are laid out properly, the local taste in architecture is admirable and the cultural institutions are second to none.

Bless your heart! I would love to know how much remains from pre-Earthquake days. Not rebuilt buildings... I know about them. But buildings more or less in their original state.

That generation were made of tougher stuff than us, I think.

I thought you might like a photo across the centre of town, most buildings destroyed but a few still standing. What a disaster.

that series of photos is amazing. Here is another photo showing the chaos: