In 1947 Italian entrepreneur Claudio Alcorso moved to Tasmania to set up Silk and Textiles, a fabric printing factory where some of the textiles were designed by fmous Australian artists like William Dobell and Donald Friend. Claudio was a passionate patron of the arts as well as the father of the wine industry in Tasmania. He established the Moorilla Estate vineyards only 12 ks from the centre of town and in the 1950s, he commissioned one of the nation’s best known architect, Roy Grounds, to design the two buildings here (now heritage listed).

Alas I, an art historian, had been to Hobart many times and had never heard of Claudio Alcorso’s gallery. 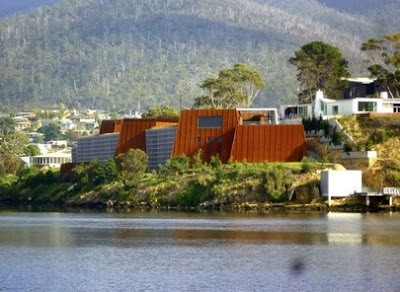 View of MONA from the ferry

Tasmanian art patron David Walsh bought the Moorilla winery estate as far back as 1995. But the old buildings were not redesigned by Fender Katsalidis Architects in Melbourne until a couple of years ago. The Museum of Old and New Art (MONA) only re-opened in January 2011 with new branding and new facilities. So this is a VERY new art museum on a river-headland in Hobart, displaying David Walsh’s personal collection.

Visitors are transported up the River Derwent on fer­r­ies specially contracted to sail from the city’s docks to the gallery. The one-storey winery building appears from the river to be dominated by its surroundings, built as if it they were going into the side of the cliffs. According to Walsh, he wanted to built below ground level to protect the heritage value of the two Roy Grounds houses on the property.

But he also wanted architecture that would be interesting and excit­ing in its own right. There are no windows and so the stark internal envir­on­ment is not what the visitor might have expected. The first thing one sees is a spiral staircase that leads 20 metres down through three stor­eys of space. From downstairs, the visitor must then stride back upwards towards ground level, not unlike the experience in the various Guggenheim museums in the world. 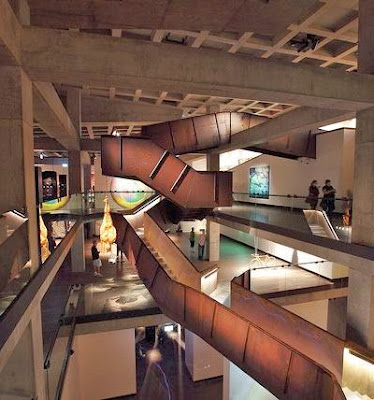 The collection is broad. Too broad, perhaps. Reflecting Walsh’s per­s­onal and eclectic taste, the collection ranges from ancient Egyptian mummies, a sarcophagus and gold coins from ancient Greece, to African art and contemporary art created last year. The least attr­act­ive gallery covers sex and death - white porcelain moulds of genitalia are awful; a model of the euth­anasia machine de­signed by Dr Philip Nitschke is confronting. And I do not want to see a man rooting his pet dog.

But the most exciting works are very exciting - by Sydney Nolan, Damien Hirst, Arthur Boyd, Brett Whiteley and other moderns. Nolan’s star piece, The Snake, stretches along 45 metres of curved wall!! A 6.5-metre high painting by Anselm Kiefer on the nature of myth is not my taste, but it is VERY impressive. Do viewers find the juxtaposition of antiquities and contemporary art exciting or shocking? I suspect it might be an age thing; I suspect David Walsh specifically intended to shock my middle aged generation.

And more shocks for the middle aged. ComputerWorld explained the technology. When visitors enter MONA they are each equipped with an O device: an iPod Touch running custom software and housed in a specially designed case. Touching the O button brings up a list of nearby artworks. Selecting an artwork offers details about the artist and the work, access to essays or interviews with the artist, and musings on the work by Walsh or his cohorts. Multimedia content can also be accessed through the system; for example artist interviews or the audio track of MONA's video-based works. And, fulfilling part of Walsh's original vision, visitors can love or hate a particular work.

MONA is the largest privately funded museum in Australia. I personally believe that great art galleries and museums have to belong to the entire population (state government), so it will be interesting to see how this gallery progresses into the future. Especially in a small city like Hobart ( pop 225,000). 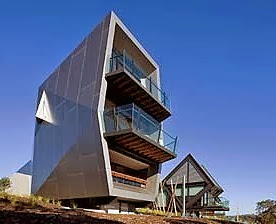 Two of the eight residential pavilions


The MONA site also includes the Moo Brew microbrewery, Moorilla Refined winery and vineyard, restaurant etc. But the greatest joy is that visitors can stay the night at one of eight luxurious art-laden and elevated pavilions, inspired by shipping containers and modern A-frame homes of the post war period. Each of these eight pavilions has amazing views of the Derwent River and each features artworks from the MONA collection. It is in keeping that each pavilion is named after a prominent 20th century architect or painter.

Let me also mention The Henry Jones Art Hotel which became Australia’s first dedicated art hotel when it opened in 2004. The hotel’s location, on Hobart’s waterfront, dates back to 1804 and is based in a former jam factory.  And who was this Henry Jones? Recently arrived from Britain, young Mr Jones purchased a share of a jam factory in Hobart in 1889. From those rather modest beginnings, he rose to fame as an entrepreneur spanning five continents. His investments ranged from jam and fruit to timber, mining and shipping. His success was epitomised by  the company’s most famous jam brand, IXL, deriving from Henry’s mantra: “I excel in all the products I make”. IXL was the only jam I ate for the first 20 years of my life.

There are 56 suites & 300 artworks in the Henry Jones Art Hotel, showing the hotel’s role as a fusion of art, heritage, tradition and nature. Exterior and interior space present art as part of the hotel’s function and its beauty. Most suites have opening windows and close harbour views, while others overlook the stunning glass atrium and reveal glimpses of the old jam factory interior. Visitors to Hobart love the luxurious combination of history, colonial architecture and modern art space on Hobart’s bustling waterfront. 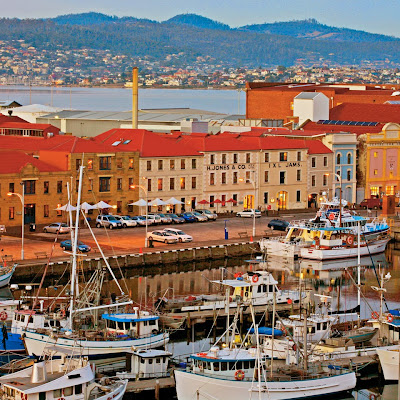 The Henry Jones Art Hotel right on the waterfront.

Thank you for not mentioning the digestive machine. I think MONA is very good for Tasmania, bringing people to the island who may other wise give it a miss. There are plans to build a tram line from the city to the museum.

I did not know what the IXL stood for. Of course South Yarra's Jam Factory was once owned by Henry Jones.

Remember when we were discussing art accommodation.

I just have to get a _whiff_ of poo or vomit and I am gagging and retching for the rest of the day. I know art is what an artist says is art, but what was Walsh thinking???

The ferry to MONA is the more picturesque method of transport, but if you are correct about a new tram line, I think people would really appreciate the alternative.

Re the Jam Factory, I didn't remember it had been sold to Henry Jones late in the 19th century. His fame was certainly spreading (no pun intended)!

I tend to stay in B & Bs whenever we are outside Melbourne, because they are moderately priced.

But you are correct...the Art Hotel looks fantastic inside and is in a magic landscape.

Joe and I will also be there :) For us it will be in mid January, just in time for the Festival of Music and Art at MONA.

Have a great holiday!

Hello Hels, Museums that house one collector's vision always have a special interest. Your description of wending one's way through the museum reminded me of the Shi San Hang Museum in Bali, Taiwan, at which the building itself is as interesting as the archaeological collection it houses.
--Jim

self-publishing in galleries, as it were, is both a great strength and an inevitable weakness. MONA is David Walsh's vision, his freshness, his funding, his excitement. But as decades of court cases regarding the Dr Barnes Foundation in Philadelphia showed, the community wants a say (as well as the original visionary). It may all end in tears.

The architecture of galleries is always important, I suppose, but in this case, the architecture is THE key part of the gallery experience. In your Taiwan example, I assume visitors are also "led around" the gallery by the awesome pathways and stairs that are available.

Merry Christmas, when it comes! David.

have a great holiday and a creative, productive new year of blogging :) I would love to meet my two Tasmanian blogging mates when we fly down there.

Walsh was thinking of publicity for his museum methinks and he received plenty.

David Walsh says he is a very retiring person and doesn't seek publicity. I disagree!

I visited a couple of years back, soon after it opened.

I found the totally new way he approached the whole business of art refreshing and exciting. I am not saying I loved all the pieces of course, but it was the package.
I did take ferry and what a way to approach the gallery. I did walk up those many many steps and it certainly set the scene for the experience. New technology enhanced it for me I have to say - and I appreciated the 'plain speak' on the audio.
Hels, I also wonder about the long term future but can only say, what a wonderful thing to do.

I am pleased you visited already... I am still getting people to go to Hobart to see MONA. And to arrive by ferry :)

For all my baby booker friends and colleagues (born 1946-55), I feel obliged to warn them to open up their thinking. This is not necessary like the galleries they are used to.

MONA's Festival of Music and Art is curated by Brian Ritchie and will be on from the 15th-19th January 2014. As the name suggests, there is music and art. But don't be fooled: there is also food and drink.

perfect timing! I hope the festival is hugely successful.

It is said that the heart of MONA is Sidney Nolan’s Snake (1970–72), a gigantic rainbow serpent of 1620 individual panels of flowers, animals, birds and human heads. As the image extends 45 metres along a huge curved wall, all of MONA had to be built around this single work on the myth of creation.

I enjoyed reading your articles. This is truly a great read for me.I have bookmarked it and I am looking forward to reading new articles.
To get new information visit here
home loans hobart
mortgage broker hobart

Thanks for sharing such kind of nice and wonderful collection......Nice post Dude keep it up.
I have appreciate with getting lot of good and reliable and legislative information with your post......
home loans hobart
loans hobart