In 1963 I loved the Beatles because my parents did not; I loved Peter Paul and Mary, The Seekers and Mamas and Papas because protest-laden folk songs were very cool, and I adored Edith Piaf.

Édith Piaf Gassion (1915 –1963) was born in Paris. Louis-Alphonse Gassion (d1944), Édith's father, was a street performer and theatrical star. Her mother, Annetta Maillard (d1945), was a café singer. Édith's father was away on the battle fields of WW1 and mother abandoned her as a baby, so who looked after her? Friendly prostitutes, apparently.

As a toddler Piaf said she was blind and recovered her sight only when she went on a pilgrimage honouring Saint Thérèse of Lisieux. As a young teenager, she was certainly well enough to join her father and half-sister Mômone in their street performances all over France. Piaf was launched, singing in public.

In 1932 she met Louis Dupont, the man who tried to rescue this tiny waif (Piaf means sparrow). She became pregnant and in 1933, when Edith was 17 years old, she gave birth to a daught­er. Unbelievably Piaf repeated her mother’s inept mothering and neglected the baby to the point of starvation and disease. Piaf’s daughter died of meningitis at 2.

In 1935 Piaf was discovered in the Pigalle area of Paris by nightclub owner Louis Leplée who was fascinated by her raw talent. She was grubby, skinny and badly dressed but Leplée taught her every­thing she needed to know. He launched and sustained her early professional career, until tragedy struck once again in 1936 when Leplée was murdered. 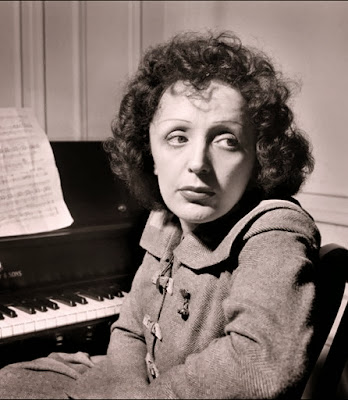 WW2 could have been a catastrophic time for Piaf, but she was meeting all the right people, incl Maurice Chevalier, Yves Montand and Charles Aznavour. During WW2, her politics were unclear – was she working for the French Resistance against German occupation or was she quite friendly to the Germans in France? France Magazine (October 2013) firmly credited Piaf with helping French POWs escape from prison camps at which she had performed. Her audience did not know or care; they continued to believe that Piaf was France’s greatest cultural icon. But we might care, a generation or two later.

When WW2 finally ended, Piaf started touring across Europe and the Americas. But tragedy was never far away. Piaf was passionate about the middleweight world champion boxer and hero of France, Marcel Cerdan. There were actually two tragedies here. Firstly Cerdan was married to some else. Secondly he died in a plane crash in 1949, while flying from Paris to meet Piaf on her American concert tour.

Yet these (1950-62) were her most successful years, shared often with other French stars eg she really helped Charles Aznavour, taking him on tour with her in France and abroad. My all-time favourite Piaf song Non, je ne regrette rien came from this era. Her voice was still rich and haunting.

In 1951, Piaf was badly injured in a car crash along with Charles Aznavour and soon developed serious spinal, drug and alcohol problems. Unbelievably near fatal car crashes happened to her again later… twice. Even her first marriage was not happy. Piaf married Jacques Pills in 1952 and divorced him five years later. Then in 1962, she married a VERY young Greek singer and sang with him on stage.

Piaf lived in Marseilles from WW2 until 1959. In her final years she lived in Neuilly sur Seine in Paris until her death in 1963. However she died on the French Riviera because she happened to be in her holiday home when she succumbed to cancer. In my romantic, lunatic teens, I believed she was so filled with grief that she committed suicide by cancer. Neglectful mother, blindness, dead daughter, death of the great love of her life, failed marriages, alcohol and drug addictions, car crashes – unending tragedies! 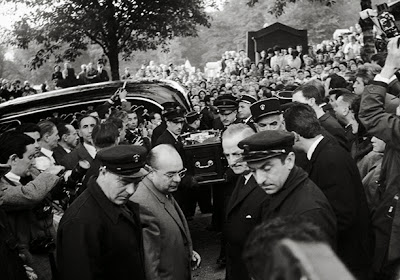 She was denied a funeral mass by the Roman Catholic archbishop of Paris because she had slept with men not her husbands. It didn’t matter - squillions of weeping mourners flooded onto the streets of Paris. She was buried in Père Lachaise Cemetery in Paris next to her daughter and father, and her husband Thèo Sarapo. The plaque on the tombstone says Famille Gassion-Piaf.

Fans can still visit her tomb at Père Lachaise Cemetery but now Paris has another Piaf memorial - a small building called Musée Édith Piaf was dedicated in her honour. How much of this life of pain was true - the Museum doesn’t know. But her song Non, Je Ne Regrette Rien, with its message of pain, joy and defiance, was without doubt a huge success. Today it stands as Piaf’s epitaph.

1963 - I remember a number of us crawling under the walls of a marquee (we had no tickets) to hear the Seekers in Cambridge. I was smitten with the lead singer I seem to remember. Happy Days indeed.

everyone has magic decade or less when you remember every song you sang, every outfit you wore, ever person you took out, every concert you attended. For me it was 1963-70. How sweet it was!

I regret nothing, and I doubt she did. Raw talent is a good description.

She was an amazing role model for young women. She may have had a difficult life, but she still succeeded at a time when women's careers were not being supported.

Hello Hels, Telescoping all these negative aspects together makes us pity her from our vantage point, but perhaps also makes her life seem more terrible than she felt herself when it was unfolding. It is often stated that great artists need to suffer, yet Piaf did not seem inclined to self-absorption.

Wow. This is fascinating Hels, I didn't know any of this! She certainly had an incredible voice but how awful that she too neglected her child.

She took the world by storm, way beyond the boundaries of France. I too believe she had no regrets.

that is an important thought. I wonder if Judy Garland and Janis Joplin knew about Edith Piaf before 1963.

as I was writing up the post, I had a long, hard think about whether to include all of Piaf's tragedies or not. I included them eventually because even if she wasn't the master of her own destiny (eg France hero's Marcel Cerdan plane crash), they made her what she became.

that voice!!!!.... it rose about all the crappiness of her life and became the most important thing.

It still moves me 50 years later.

Helen look what the New Yorker had to say about Piaf's connections to the gangster world in 1936.

"Her Papa Louis Leplée was dead — murdered for unknown reasons by an unknown intruder. The crime has never been solved, but suspicion fell on one of Piaf’s gangster friends. The press found her guilty by association, even though the police had cleared her, and the animosity of Parisians was so intense — she was hissed off the stage at holes like Au Rat Mort, in Pigalle (the only work she could get) — that she skipped town. She spent about half a year on the road cruising for sailors in ports like Brest or Nice and getting into brawls. What or who brought Piaf to her senses no one knows."

Thank you. I suppose any child who grew up on the streets without family protection would need someone to watch over them, including street gangsters. After all, Piaf was grubby, skinny, badly dressed, brawling, pregnant at a very young age, and probably blind.

But once she started earning a living and lived in a proper house, the accusation that she was involved with old gangster friends became a bit silly. So I wonder why the animosity of Parisians remained intense, even after Piaf had been cleared by the police.