The Contemporary Art Society was the central organisation for 9 artists in Melbourne. Set up in 1938 in defence of artistic freedom and to encourage modern art, the Society enabled the artists to exhibit their work. It also provided a forum for the ideas of these young men in their stance against despotic authority. Whether they were communists, liberals or apolitical, these artists were all united in the common cause of humanitarianism against Fascism.

These were modernists who saw themselves as the avant garde against the traditionalist, restrictive art practices of the Australian Academy of Art. They opposed establishment values at every stage, so Surrealism appealed to them; it was seen as a radical expression of individual freedom. Naturally the group looked to early European expressionists and the Surrealists for inspiration. 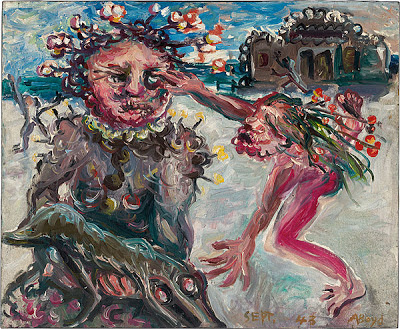 At least two of these artists did not serve during the war. Danila Vassilieff (1897-1958), who had arrived from Russia in 1935 specifically to avoid politics and war, was in any case far too old to enlist. And Noel Counihan (1913–86) spent endless time in hospital with TB.

Pain was expressed in various ways by this group of young artists who had broken away from the dominant artistic style. Known as the Angry Penguins after a modernist magazine of the same name, the group included the artists that I have mentioned, and others. Sydney Nolan was most closely involved in this particular literary journal; he was a designer, editor and later one of the publishers. Albert Tucker was an active contributor and editor of the sociological section.

I have written at length about the Anti-Fascist Art Exhibition that was initiated by Noel Counihan and held in Melbourne's Athenaeum Gallery in 1942. The Anti-Fascist Art Exhibition was then, and remains now, a landmark display of Angry Penguin art. The young artists understood that conservative artists, gallery directors, curators and political decision-makers in the arts bitterly opposed the exhibiting of modern art inspired by social concerns. No-one expected the state gallery directors in Melbourne and Sydney to have supported the Angry Penguins in this exhibition.

Albert Tucker’s work first attracted attention in Melbourne in the 1930s during the Depression when he earned a shaky living as a freelance illustrator, painter and writer. In the 1940s, Tucker was living in the beach suburb of St Kilda where he began his modern evil series. Image of Modern Evil 1945 depicted a tram looming out of the darkness, a naked, fleshy form lying directly in its path. Tucker was shocked at what he perceived to be the immoral behaviour of young women on St Kilda’s streets during WW2. The darkness and symbolic forms he used were a metaphor to explore darker aspects of the human psyche. Tucker said ‘The images came directly out of wartime Melbourne ... I was still the Outraged Edwardian puritan and the crescent [shown in this work in place of the prone figure’s lips] seemed to embody the virulent and primal sexuality that had been released in the blackout.’

With the outbreak of war, life was tense. Jobs were scarce, the Depression was hardly over and life, particularly for rebellious young artists, was tough. Arthur Boyd, a sensitive painter of impressionist landscapes, was influenced by the prevailing mood and the dark expressive paintings of his contemporaries. During 1940–1945 Boyd made a group of paintings, described by the artist as psychological or poetic fantasies. These nightmarish canvases, including The Cripples 1943, were littered with the maimed and the monstrous. Bizarre figures hobbling on crutches or chasing kites and butterflies – symbols of freedom – were a disturbing breakaway from his previous imagery. 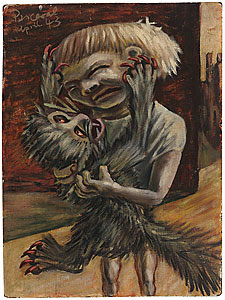 John Perceval, Boy With a Cat 2, 1943
59 x 44 cm
National Gallery of Australia, Canberra
Conflict between the innocent child and his would-be pet

John Perceval’s childhood must have been very unhappy but fortunately his experience with the war was limited. He enlisted voluntarily but only served for eight months due to a polio infect­ion, which exempted him from further active service. He remained a keen observer of Melbourne during the war years, painting intense and passionate works of the city and its people. Soul Singer at Luna Park 1942 was inspired by the Jazz night club scene in Swanston Street, which was a haunt for service people on leave. Viewers always noted the expressive interplay of dark and light. Alas for Perceval, he battled with alcoholism and psychological disturbance, presumably relics from childhood.

Danila Vassilieff (1897-1958)  arrived in Melbourne in 1935 and although he didn't sell many paintings, he brought a stream of Russian folk art into Australia. By 1937 Melbourne was at the height of the debate between the academicians and the moderns, so Vassilieff was welcomed by the younger artists as a direct transmitter of the tenets of European modernism. Certainly for the younger Angry Penguins, Nolan, Boyd and Joy Hester, Vassilieff provided the missing link in Australian art history. He lived in rural Warrandyte until 1954, painting whenever he could, gardening, fishing and teaching the rest of the time.

I wrote at length about Yosl Bergner some years ago. Despite his years in the Australian army, Bergner seemed unprepared for the plight of many struggling Australians. He painted painful images of indigenous Australians, blighted suburban environments, slum dwellers and refugees. Bergner joined Tucker, Counihan, Vassilieff and the others in the newly formed Contemporary Art Society, specifically to give voice to his art that would never be accepted by the establishment. I have no doubt that Bergner also hoped to influence the future direction of Australian art.

Although the men pursued their art separately, the Angry Penguins revolved around three artistic and intellectual centres. The first was Heide, the farmhouse salon of John and Sunday Reed, on the outskirts of Melbourne. Open Country at Murrumbeena, the home of the multi-talented Boyd family, was the second centre. And Stonygrad, the Warrandyte home of older artist Danila Vassilieff. It was also the progressive school where Vassilieff taught art. 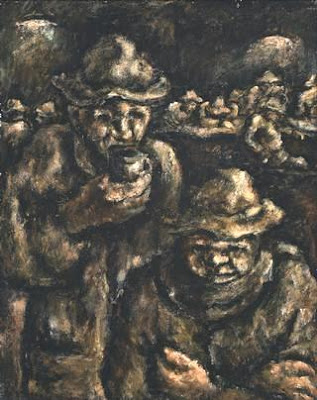 The Angry Penguins worked on their art in a spontaneous manner. Their paint was applied swiftly, in a way that drew attention to the creative process and made the creative process part of the content. If the darkness and symbolic forms were a metaphor to explore darker aspects of the human psyche, there was nonetheless extraordinary energy in their paintings.

But they were a marginalised minority and the Contemporary Art Society saw itself as threatened. Perhaps it was from the obvious external threat i.e the Fascists were threatening civilised values all over the world, especially Europe. But I wonder if there was also some sort of internal threat i.e from the Contemporary Art Society splitting on art-ideological grounds.

My best information about Melbourne art during WW2 came from two great sources. The first is the National Gallery of Victoria’s collection stories. The second is Felicity St John Moore’s catalogue essay called Angry Penguins and Realist Paintings in Melbourne in the 1940s, published by the Australian National Gallery Canberra, 1989. 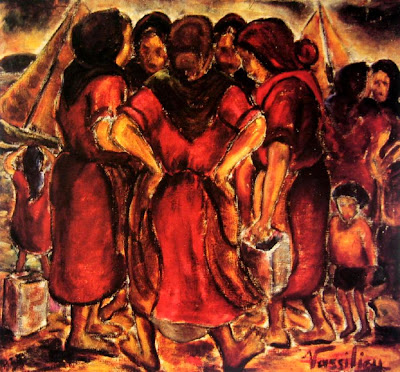 Hope the festive season brings joy to you day tomorrow.
Leon and Sue

A great post Hels. Australia was such a stifling and conservative place post the recession but fortunately there were many to challenge society, from artists to writers and the communists who we may now view as misguided with their commitment to Russia and the Soviet Union. Australia was a better place for their presence.

Heide put on an exhibition of Albert Tucker and his Images of Modern Evil a couple of years ago. Tough to look at but powerful.

Happy Xmas Helen and thanks for the year

hope the new year is hugely successful for the entire bloggy world :)

stifling and conservative, yes indeed. Plus dangerous as well. The treatment of the young lads on the Dunera was almost criminal; the prison camps for refugees in Hay and Tatura were totally criminal. I can see Menzies' finger prints all over these, even during the years when he wasn't prime minister.

Just one thing makes me worried: "a female figure appears in each work with the body reduced to its raw and sexualised elements". Why were images of modern evil personified by female figures?

Vassilieff: Journey to Mildura is an exhibition that covers 34 paintings created by Danila Vassilieff after he emigrated to Australia in 1935. Visit the exhibition until mid April 2014.

Many thanks. I have added a Vassilieff painting to the post. I wonder which are the 34 paintings in the Mildura Arts Centre exhibition.

Thanks for the post on Angry Penguins - its a good overview, and acknowledges that there were other get-together places apart from Heidi, for those artists. I am a bit uneasy that the myths built around Heidi seem to blot out a lot of other places and people.

Following on to your comment about the Dunera 'boys'. In the 1980s I interviewed an artist in London, who had been one of these. For me the amazing thing was that not only did he not harbour bitterness toward Australia for his imprisonment, he had only good things to say. He saw himself as an honourary Australian and exhibited with other Australians in London in the 1950-60s. Of course it was criminal act to take these refugees in this way.

I realise the art establishment did not like the Angry Penguins' work, thinking it was poorly constructed art and politically suspect as well.

But I do not understand why Menzies, the Australian Academy of Art, the directors of the NSW and Victorian state galleries etc were so afraid of these young artists. Why did they not allow the Anti-Fascist Art Exhibition to be shown in the state galleries, hoping that no-one would go to see the works?

Melbourne Burning was painted by Arthur Boyd post-Hiroshima and after the closing of the Nazi death camps. Representing the loss of all innocence, the painting shows how intensely Boyd felt the moral crisis of the war and its aftermath. If Dresden, Berlin and Hiroshima could be obliterated, why not Melbourne?

thank you for sharing this amazing information with us ..