Ivon Hitchens and British art of the inter war years.

Ivon Hitchens was born in London in 1893, and had one big advantage over other would-be artists – his father was the landscape artist Alfred Hitchens. By the time World War One had finished, young Ivon had completed his art studies St John's Wood School of Art and at the Royal Academy School in London. Fortunately for him, Hitchens was never conscripted as a soldier in the trenches.

Soon after graduating, Ivon became a founding member of the 7 & 5 Society in London, the seven rather conservative painters and five sculptors who gathered into a group to promote their careers. I say “conservative” mainly in the sense that they wanted to restore normal life after the devastation of WW1. And because they loved Paul Cezanne and not Wyndham Lewis. You can read the Society’s first published catalogue (April 1920) of intentions.

It was only when Ben Nicholson and his friends Barbara Hepworth and Henry Moore were invited to join the group in 1924 that there was a shift towards more progressive art. Nicholson was elected Chairman in 1926. When in 1934 he introduced a ruling restricting the work shown at the Society's exhibitions to non-representational only, this created a schism in the group that resulted in several of its original, more traditional members leaving or being expelled. The unhappy artists included John Aldridge, Edward Bawden and Eric Ravilious, all of whom moved to Suffolk and together set up the East Anglian School of Painting and Drawing. Exhibitions had been held at the Beaux Arts Cork St, Walker's Gallery New Bond St and other London sites. 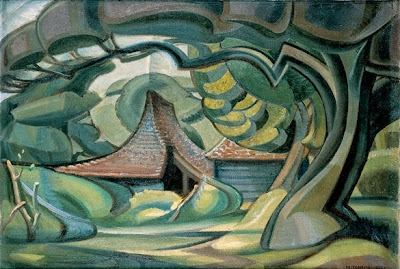 But all that came later. In 1922 Ivon Hitchens had his first one-man show exhibition at The Mayer Gallery in London. Either from commit­ment or convenience Hitchens embraced the artistic abstraction ad­vocated by the newer members of the Society and during the 1920s his mature style fully emerged. In the years 1919-1935, the 7 & 5 Society comprised 56 members, and a further 31 other artists who also exhibited in their shows.

In the inter-war years Hitchens lived in a studio in Hampstead, within a circle of avant-garde artists known as The London Group. The group included the remaining members of the 7 & 5 Society as well as new and exciting artists like Naum Gabo and Paul Nash. Barbara Hepworth, Henry Moore and Ben Nicholson were thrilled with the reconstituted group.

Hitchens and his wife Mollie only moved out to leafy Petworth in West Sussex in 1940 because of war damage to his studio. It is said that West Sussex was where he was able to develop his mature style of semi-abstract, richly coloured painting. But I would suggest that Curved Barn 1922 showed that his semi-abstract, richly coloured works were already developing nicely in the post war years. Although painted with lots of energy, his panoramic landscape paintings displayed a unity of form and colour that found regular buyers.

In 1951 he was awarded an important prize in the Arts Festival of Great Britain. Plus there have been four major retrospectives of Hitchens' work, held by large museums and organisations: British Council in the 1950s, Tate and Towner Gallery Eastbourne in the 1960s, and Royal Academy in the 1970s. Yet people with an interest in British art history are more likely to know Eric Ravilious, Barbara Hepworth, Henry Moore and Ben Nicholson than they are to know Ivon Hitchens. In fact when Paul Nash wrote of an outbreak of talent between 1924 and 1935, he dis­cussed the best loved British artists by name but did not even mention Hitchens. 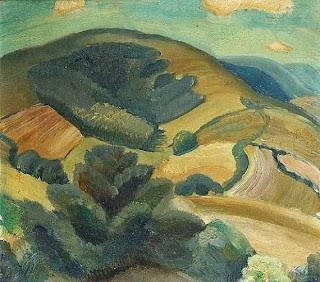 The book Ivon Hitchens was written by Peter Khoroche and published by Lund Humphries in 2007. The editor waxed lyrical: Hitchens tran­s­lated his intense communion with nature into a visual music employ­ing rhythm, counterpoint and echo as unifying devices. In land­scapes, room interiors and still lifes he melded the discoveries of Braque and Cezanne into his own pictorial language of patterns of endless movement. Right!


A wonderful exhibition called A Crisis of Brilliance was displayed recently at the Dulwich Picture Gallery in London. The works were created by by early 20th-century artists C.R.W. Nevinson (born 1889), Stanley Spencer (born 1891), Mark Gertler (born 1891), Dora Carrington (born 1893), David Bomberg (born 1890) and Paul Nash (born 1889), a group referred to by Henry Tonks, their drawing tutor at the Slade School of Fine Art, as the school’s last crisis of brilliance. Ivon Hitchens (born 1893) could not be included in this exhibition because he was never a student at Slade. But in many other ways he was their peer. 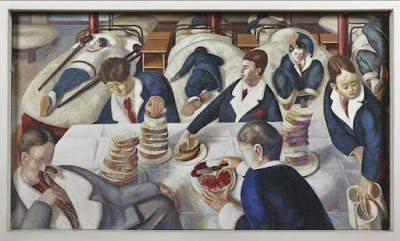 There have been many Stanley Spencer exhibitions, starting with WW1 when Spencer was an orderly in the Beaufort Military Hospital in Bristol. Then Stanley Spencer: Heaven in a Hell of War is on show at Pallant House Gallery, Chichester, in mid- 2014.The most recent Spencer Exhibition will be on at the Hepworth Wakefield until the end of September 2016. Offering the first UK survey of Stanley Spencer’s paintings for two decades, see the artist's pastoral vision of rural life, re-imagined though his own spiritual beliefs, his domestic life and portraiture.

I'm not familiar with his name but if the barn painting is a good example of his work, I should be. I love it.

All born the same time and all painting in the same part of the world. Yet some we know well and some have disappeared from the art history books! Strange.

I feel sorry for the original 7 & 5 Society because it was their organisation with their own goals. Nicholson, Moore and the moderns should have set up their own society. Poor Ravilious.

The split must have been shocking. In 1919 the war was over and they must have thought they were the youngest and most talented group left alive.

Later on, when the "newcomers" restricted the Society's work to non-representational art and expelled the original, more traditional members, it must have felt brutal.

How ironic that it was the expelled members who moved to Suffolk and were safe from London's bombing during WW2.

Thank-you for the post, it's always fascinating to hear about collectives of artists, and how a lot of them gain notoriety and are able to continue their work which is often poorly paid with the support of being in a group. I recently visited the Jonathan Clark Gallery which is holding an Ivon Hitchens exhibition at the moment. Wonderful stuff, Jonathan Clark Fine Art a gallery just off the Fulham Road in London manages the artist's estate now and so has Ivon Hitchens exhibitions quite often. I'm they find some unseen gems soon.

Hello Hels, I just had a fascinating time reviewing some of Hitchens' work on the internet. Some of my favorites were even more abstract than the ones that you illustrated.

I also noticed that the Yale British Art Center has Hitchens represented by one abstract 1962 painting:

great reference, thank you. I didn't know about the Jonathan Clark Gallery exhibition so it is great to know we can rely on bloggers to keep us up to date :)

You are a clever bloke! I am still annoyed about the split in 1934... there was no need to break the group up. So I selected the _least_ abstract paintings I could find, to show that artists using different styles could have easily worked together. After all, Ravilious and Adridge were hardly old fashioned.

I did know of Ivan Hitchens, and glad to learn a bit more about him. I do love the landscape you have use to illustrate this post.

Fascinated to hear for first time ab (thanks Nidal) regarding Jonathon Clark Gallery, off Fulham Road. Must check it out before I am next in London.

Ooooh, I love the curvy lines of his Curved Barn. That painting has a lovely fantastical element to it but I find the painting of the South Downs to be too plain. I really must make an effort to visit the Dulwich Gallery an surrounds next year.

When I finished unI decades ago, I knew a great deal about the Renaissance in Italy, and the 17th century in the Netherlands and France etc. But nothing at all about art in the 20th century.

So i have bought hundreds of books and been to dozens of conferences since, catching up on Australian, British and European art in the late 19th and early 20th century.

You are fortunate living in the centre of world history and culture. For me to get there, it takes ages to plan and fund :( thank goodness for blogs.