Peru's lost cultures - destroyed by the Spanish in the C16th

I know a lot about Spanish culture in South America and rather less about the Inca’s Machu Picchu in Peru.  But I know nothing about the splendid cultures that PRE-dated the Incas. Now the National Gallery of Aust­ralia in Canberra is hosting a major international exhibition, Gold and the Incas: Lost Worlds of Peru, from Dec 2013 until April 2014.

Gold and the Incas is the first survey of Peruvian art ever staged in Australia and is show-casing the splendour of the ancient pre-Hispanic cultures of Peru. The aim is to show a European-focused Australian audience the aesthetic depth, drama and beauty of the southern empires who lived and thrived before the Spanish arr­ived.

For 2,000 years before the Spanish came to Peru, great cultures rose and fell, were conquered by others or absorbed into them. Gold and silver objects were plundered by the Conquistadors, sent to Spain and melted down to make coins. But in the last 100 years there have been impressive archaeological finds, and much scientific research is still continuing. In fact the objects in this exhibition come entirely from funerary artefacts uncovered in Peru during the C20th.


200+ objects in the exhibition include rare gold pieces made to decorate the nobility in life or in death, intricate jewellery, elaborate embroid­ered and woven cloths, and sophisticated ceramic sculptures. The senior curator of international painting and sculpture, Christine Dixon, said some of the items in the show had been found buried in the Paracas Caverns - cliff shafts used as tombs, in which dignitaries had been mummified in dozens of wrappings.

Why in tombs? Christine Dixon said that like the ancient Egyptians, ancient Peruvians practised a cult of death. They buried their rich and powerful citizens in tombs kitted out with supplies for a comfortable afterlife. Aristocratic Peruvians were often mummified and interred with provisions that included corn liquor in ceramic vessels, ceremonial swords, nose ornaments and expensive, luxurious textiles. The curator noted that it was these very rituals of death that ultimately kept alive their endangered culture. For in burying their art treasures alongside the deceased, Peruvians protected them from environmental degradation and the Spanish conquistadors, who in the 1500s went on a tragic looting and killing spree. 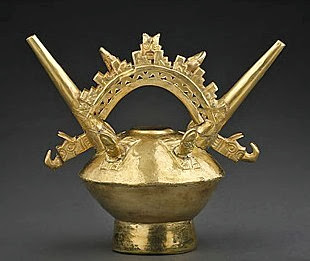 
Some Peruvian sites have their own museums, and were prepared to lend some of their greatest treasures to the National Gallery of Austral­ia. Many extraordinary objects on view belong to three museums in Lima, all founded by Peruvian archaeologists and collect­ors, while the National Museum of Archaeology, Anthropology and History has a central role in Peru's national life.

As well as being highly-skilled metalworkers, potters and weavers, the artisans of Peruvian civilisation included in their works religious and political ideas based on the importance of the natural world. The oldest piece in the show is a carved idol dating back to 1000BC where we can see lively depictions of animals, birds and fish as decoration. Technological inventions such as the knotted string quipu provide a new outlook on the sophisticated world of the Incas.

The Chavín, Nazca, Moche & Chimú cultures were overcome by Inca warriors by 1400 AD. Yet the famous Inca empire, that conquered all of Peru as well as most of Argentina and Bolivia, only lasted 130 years. In 1532 the Spanish, led by Francisco Pizarro, began their conquest. Within a very short time the mighty Inca builders of Machu Picchu were themselves in trouble. In 1572 the last Inca stronghold was discovered, and the last ruler was captured by the Spanish and executed, bringing the Inca empire to an end.

A somewhat similar exhibition in Seattle Art Museum in Washington is wowing the population there. But the response there suggested that historical artefacts and art objects were not necessarily the same thing. “It’s hard to get past the fact that the ceramic bottle in the display case is dated to the year 100 AD and was used in sacrificial ceremonies, and the aes­th­etics of the art pale in comparison with its history. The works are not nec­ess­ar­ily the best art in terms of modern standards, but they serve to showcase ancient cultures in all their greatest, glimmering glory". 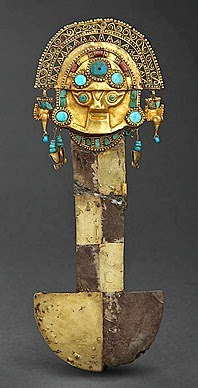 For those who cannot get to Canberra or Seattle, read Gold and the Incas: Lost Worlds of Peru, published by National Gallery of Australia in 2013. This book includes essays by Peruvian and Australian scholars, maps and a useful timeline.

Very interesting. Of course who knows what Paddington smuggled out from Peru under his garments.

The reason I suspect that Paddington didn't come from Peru was because the Spanish melted down EVERYTHING of value and shipped it back to Spain. Apart from the intrinsic value of the gold and silver, they saw nothing of worth in New World culture.

Hello Hels, I used to peruse the pre-Columbian sales catalogues in the Cleveland Museum of Art library, and also visited their pre-Columbian galleries, and these pieces are truly marvels. The caves there, like the Egyptian tombs, miraculously preserved even textiles for thousands of years. I don't know what was featured in Seattle, but many of these relics exhibit the highest degree of artistic merit and finish, in addition to their historic value.

About the Machu Picchu repatriation, in the general articles I read neither Yale nor Peru really presented a complete and substantiated argument, but my feeling is that Yale was unfairly demonized and railroaded into returning the artifacts.
--Jim

Remember when we were looking at all the Zurbarans and other paintings being shipped to South America? I loved that. Not very politically acceptable now, I know.

I am truly impressed... not often that happens :) I met a young woman from Peru during my Gap Year abroad and we shared correspondence for years, but otherwise I would have had to have looked up on the map where the country was *blush*.

You are spot on re the textiles. Not only were they utterly luxurious when they were made, but this most ephemeral of art forms has survived beautifully for endless centuries.

You remember the 17th century Seville artist Zurbarán best because he worked largely for monastic orders. Murillo was also invited to paint the life of saints for convents.

We can imagine how lonely the Spanish monks and soldiers would have been in the colonies and how excited they would have been when objects from their beloved Spanish culture arrived by ship.