How close were Claude Lorraine and JMW Turner?

The National Gallery in London has an exhibition called Turner Inspired: In the Light of Claude which will continue until 5th June 2012. According to the gallery, it is the most in-depth examination of Turner's experience of Claude's art. The exhibition includes oils, watercolours and sketchbooks, and introduces visitors to the story of the Turner Bequest and its importance in the history of the National Gallery. 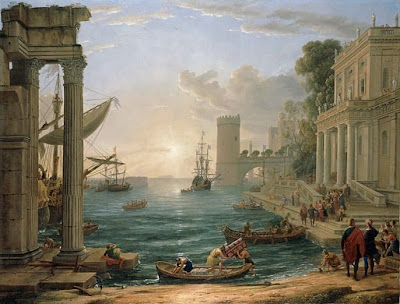 Claude, Seaport With the Embarkation of the Queen of Sheba, 1648. Nat Gall

J.M.W Turner (1775-1851) himself understood well the connection between the two artists; on his death, Turner bequeathed the National Gallery two paintings, on condition that the works were hung between two pictures by Claude Lorraine (1600-82)! The final room of the current exhibition has collected and displayed archive material dedicated to the relationship between Turner's bequest and the Gallery. 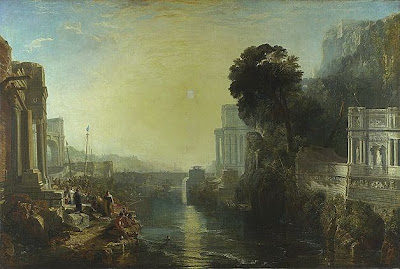 So my question to the Gallery is: how real was the connection between the 17th century Frenchman who lived in Italy … and the 19th century Englishman who loved Claude’s work, even before he made his first visits to France, Switzerland and Italy?

The longer Claude lived in Italy, the more his paintings became classical, monumental and sensitive to the effects of light. One of his important mid-life paintings was Seaport With the Embarkation of the Queen of Sheba, painted in 1648. Many of Claude's paintings were concerned with travel, but here he created an imaginary seaport to depict the unusual story of Sheba’s and Solomon’s separation. The classical architecture was stunning, dwarfing the human beings and even dwarfing the ships.

I believe that during the Italian decades, Claude was always Claude. So the comparison between the two artists stands or falls on which Turners were selected. Country Life 21/3/2012 aptly chose the National Gallery’s own Dido Building Carthage 1815, identifying it as one Turner’s most direct salutes to Claude. The seascape was also concerned with an imaginary seaport, with ancient architecture and human beings, but this time the sky was hazier and the water darker than in Claude’s vision. 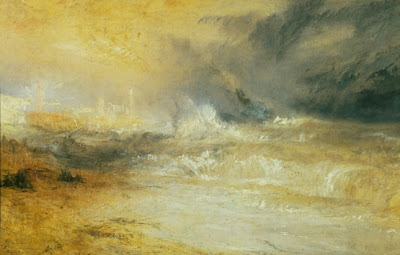 Perhaps comparing Turner to Claude became less tenable after Turner’s first visit to central Italy in 1819 and his second visit a few years later (in 1828). Then a middle aged man, Turner soon discovered that Claude’s idealised classicism was not real, and perhaps it never had been. For all the beauty of Claude’s landscape, 19th century Italy was very different. Modernity itself was very different!

Turner’s later painting Waves Breaking on a Lee Shore at Margate c1840 (Tate London) was a very different kettle of fish, owing nothing to Claude. Instead of classical ruins, depicted in minute detail and lit by a pale blue sky, Turner’s drama came from an extremely rough sea. The sky above looked ominous and in the distant coast, the viewer could almost detect the outlines of the town’s harbour wall and lighthouse. Turner no longer bothered with minutely depicted architecture, classical or otherwise. The wild sea and sky were now his subjects. 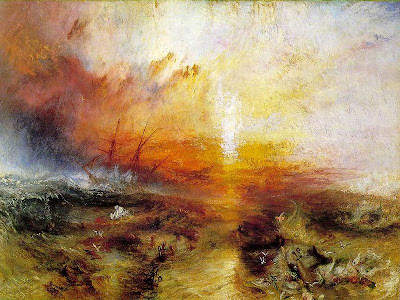 Slavers Throwing Overboard the Dead and Dying was also painted in 1840 and once again focused on wild and romantic seas and skies. However the details were intentionally very difficult to detect and the viewer had to rely on Turner's title, when first analysing the contents. The ship in the background, sailing through a tumultuous sea of churning water, left alive human bodies thrown overboard. Brutal yes, but with more of an emphasis on wild nature than on human brutality.
Posted by Hels at 2.6.12

I love Turner. Would have loved to see the show. Thanks for sharing.
Jennifer

I have added another Turner from his post-Italian period to show how unclassical and how romantic Turner had become. It is a wild, amazing painting that I hope you love.

Turner was of course influenced by many other artists - and factors - than just Claude. The National Gallery exhibition is flawed. See my review in the last issue of The Jackdaw www.thejackdaw.co.uk Selby Whittingham www.jmwturner.org

thank you very much for the reference... I will get the students to read it and come to their own conclusions.

It seems that the National Gallery made a mistake in the title: "Turner Inspired: In the Light of Claude". Instead of describing the exhibition as the most in-depth examination of Turner's experience of Claude's art, they should have examined all of Turner's influences.

You remember what you said about Alma Tadema - how he went from being the richest, most successful and most loved artist of his era, to being rubbish within 20 years of his death.

The Guardian said a similar thing about the post-Claude Turners: The art grandee Kenneth Clark recalled seeing rolls of Turner's later canvases stacked in the cellars of the National Gallery in the 1940s, where they were thought to be old tarpaulins, and glimpsing Turner's work patching a broken window!! It was really only from the 1960s, with the influence of the Abstract Expressionists, that these Turners came to be appreciated for their painterly values, rather than as subject pictures gone wrong.

very interesting reference. It does not surprise me at all that ....Turner's contemporaries and succeeding generations admired his big, finished paintings in the classical tradition and his luminous topographical watercolours. His late, ethereal works, those great swirls of cloud, water and light, were incomprehensible and a little mad.

But using the Turner canvases to plug holes in broken National Gallery windows in the 1940s strikes the modern art lover as outrageous.

Turner's last words were supposed to have been "The sun is God". I think this is his connection with Claude. It is the southern sunlight in Claude's depections of the ancient world. Even in his final paintings, Turner is still trying to reach that light.

Turner (died 1851) was problematic, especially in his later career. Why did he live in seclusion? Why did he move to Chelsea and cut off all contact with his friends?

I can see the footprints of John Ruskin (died 1900) all over this story. Did Ruskin rewrite Turner's art history in a light that he (Ruskin) thought would be more respectable?